As I write this I am back home in Edinburgh under lockdown and i think it is going to be one of the quietest birthdays of my life, to maximise the safety of the family Lee is with her mother in Aberdeen and I am here with my oldest daughter while my younger daughter Holly is with her boyfriend in Selkirk so she can get to work to look after her horses so we are all separated but keeping in touch with video links.  I am very happy and relieved to be here as the last few days of my South American adventure in Buenos Aries got a little exciting and was a bit of a close shave.

Initially all was well, there was a rainstorm as I took the ferry from Montevideo across the river to Argentina so arriving at the romantic capital was more like entering hull after crossing the north sea as you can see below. 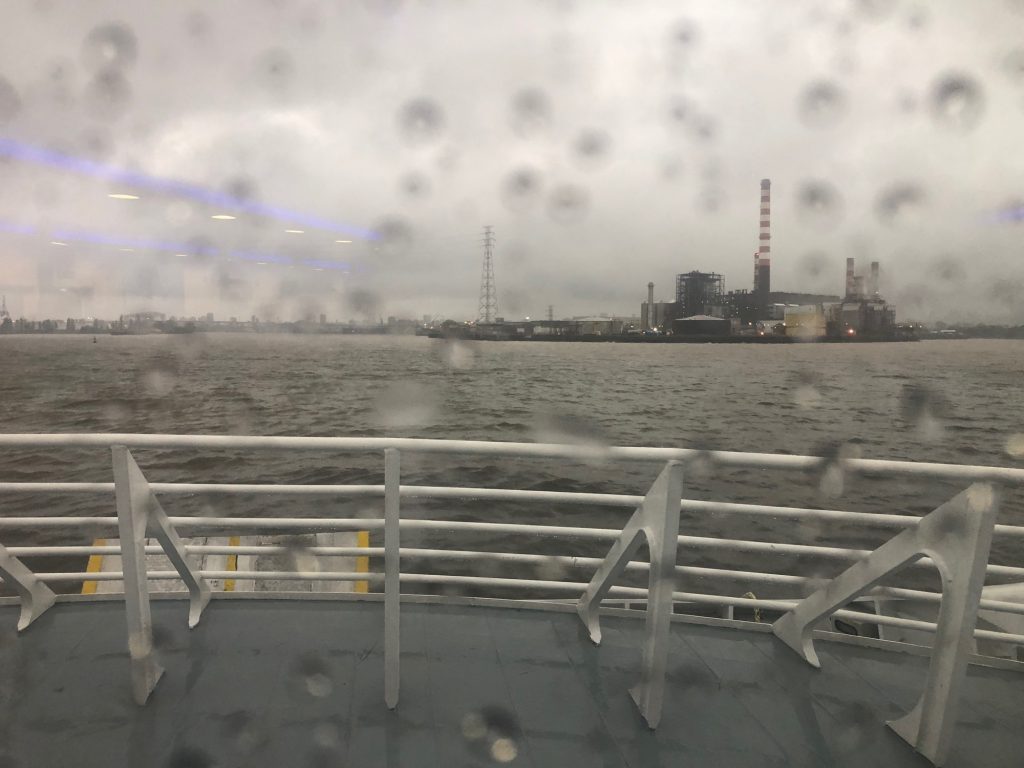 I got properly soaked for the first time in the trip trying to get a taxi to my hotel but once I dried out I was able to head out with Tony and grab a proper Argentinian steak. 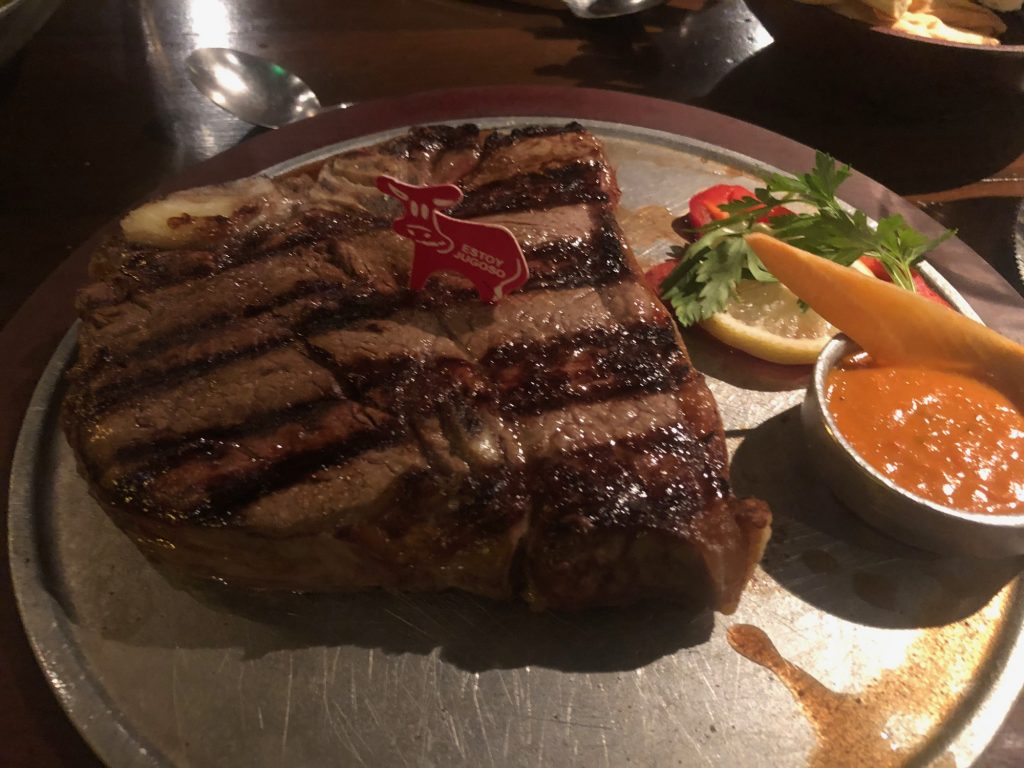 I was so impressed by the steaks that I even had one for lunch the next day as well, the technique they use is to have a roaring wood fire and to scrape the glowing embers under a rotating grill to cook the meat, different positions on the grill correspond to different levels of done, the interesting thing is that the meat gets a high heat and then a rest multiple times over so you can optimise the cooking and retention of yummy juiciness.  Meantime Tony had to head back to Montevideo as that is where his departing plane was in a few days 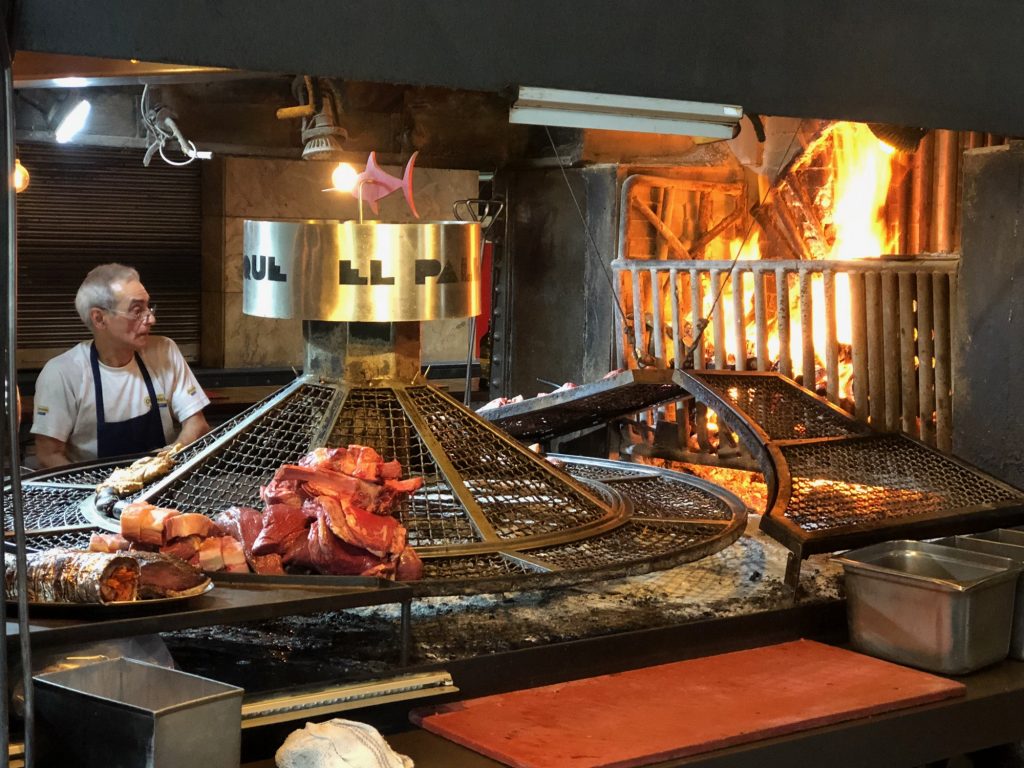 Just as I set about organising my few days in the city the government started to get a bit worried about the Corona virus as there had been about 13 cases in Argentina but so far no deaths, there was a suspicion that the number of cases was much larger but undetected.  As I wandered around Eva Peron’s balcony humming “Don’t cry for me Argentina” of course the news feed on my phone informed me that newly arrived Europeans would be required to quarantine for 14 days in hotels as of the following day and this included anyone who had arrived from Europe inside the last 14days.  It seemed like my flight out in two days time was going to be just in time 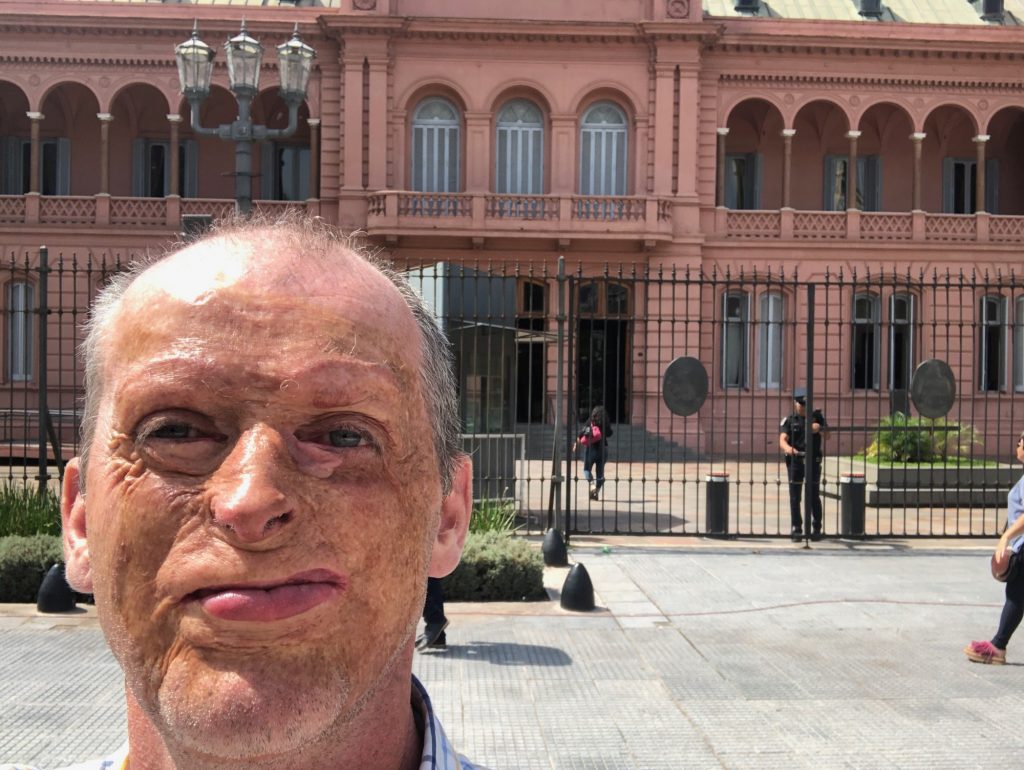 That night I went to a sparsely populated Tango show, eating alone and with my trusty sanitiser in my pocket I felt that this was a pretty low risk activity as there were so few cases in the country. 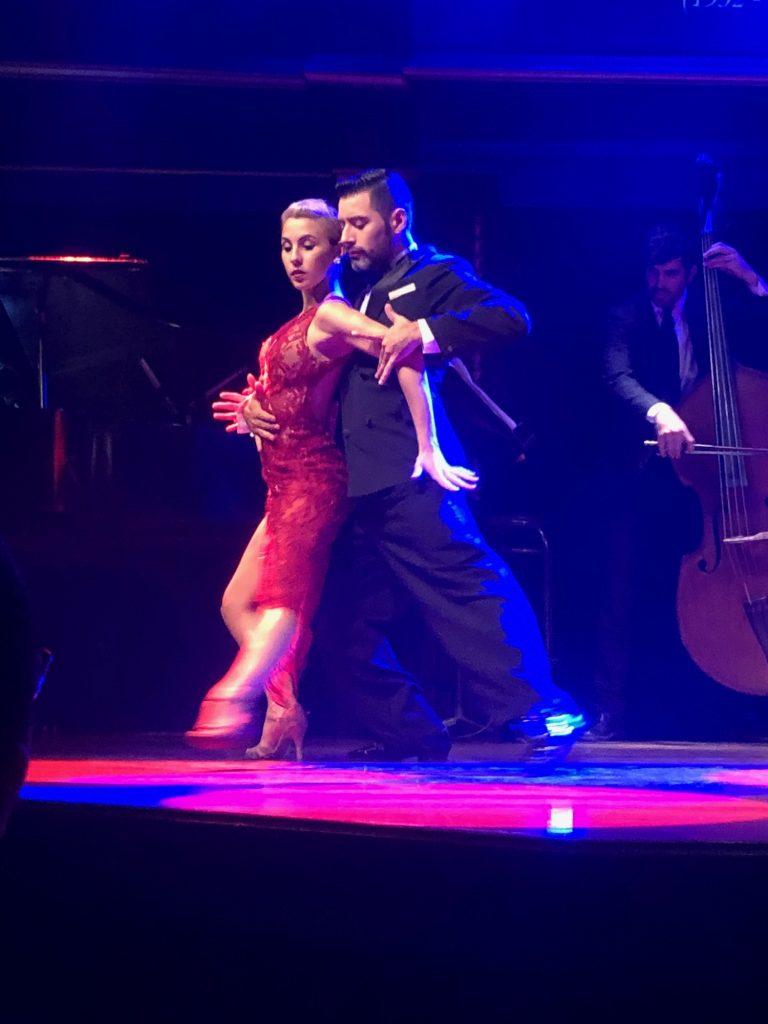 The show was very well done and lasted over an hour tracing the history and styles of the Tango with a team of about 8 dancers and a live band so it was a very nice way to spend an evening social distancing !  At this point sanitising gel was still easy to buy so with washing a few times in the evening and this supply I felt pretty secure. 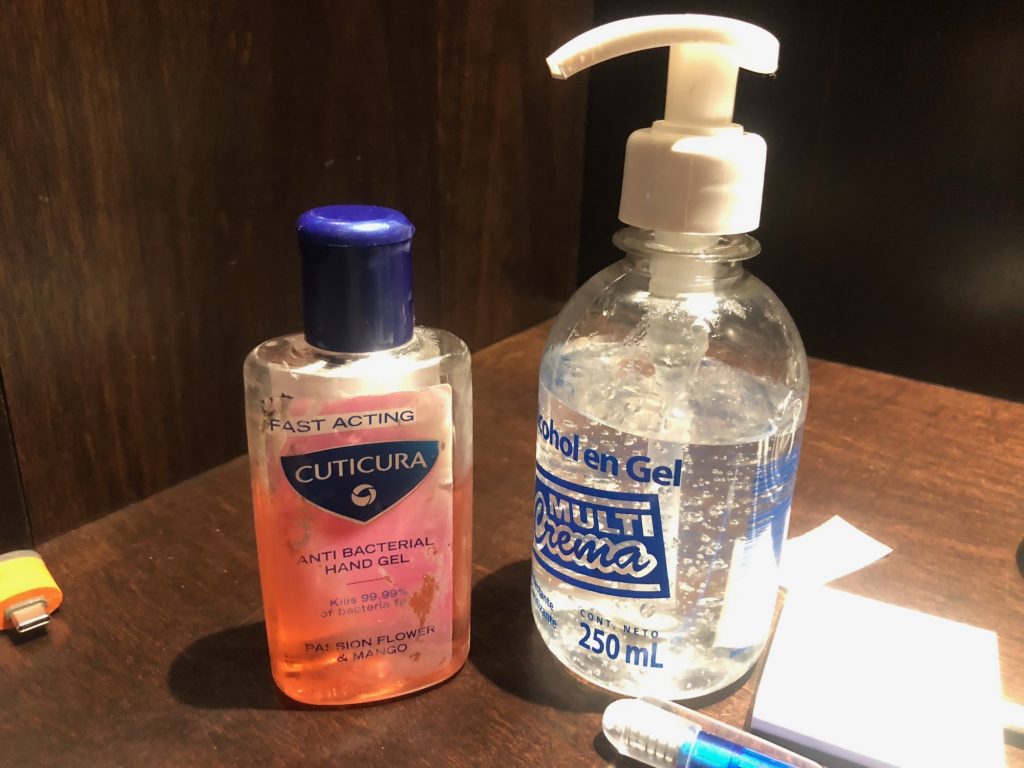 The next day my plan was to visit the Opera house and take a long walk through the city, a good way to see a lot but still stay in the fresh air and out of the tourist buses.  Sadly as I got to the Opera house the tours had been suspended due to the virus. As I walked though the bustling city, keeping my distance, it seemed like just another normal day, little did I know it was going to be one of the last “normal days” I would experience for months.  I stopped for a coffee around 10am and looked at my phone in Starbucks, in the corner of one of the news feeds there was a comment about Argentina, when I followed it I learned that Argentina had announced the full shut down of flights to and from Europe but did not specify when this order came into effect.

I jumped up from my seat and dialled lee in the hope she could research the situation as I quickly walked back to the hotel about 30min away, as I did so I walked along a four block queue which ended in the office of the local Airline and I knew I was in some trouble. 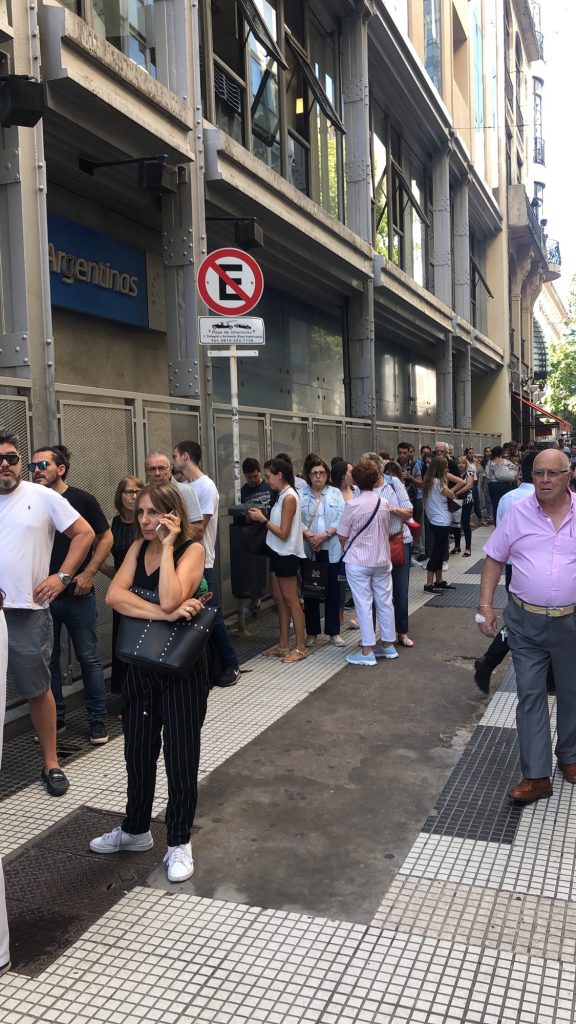 In a tactic learned from many years of business travel I did not even try to get through to the Airline in this case British Airways I went to the hotel, packed my small bag, paid and headed directly to the airport in a Taxi.  As I waited a few minutes for the taxi in the hotel lobby I had a sharp lesson in what was to come.  Two guys, foreign tourists, turned up to check in, one coughing and the manager was checking with his head office if he could admit them and how he was supposed to isolate them to comply with the government decree of the previous evening.  I carefully positioned myself well away from the coughing one and jumped into the taxi while cleaning my hands.

Once I arrived at the airport I discovered there was no ticket sales office for BA so I went directly to the check in for that days flight, at this point it was just after noon and customers were just finishing checking in for the 2pm flight.  I explained that I had a ticket for tomorrow but that if possible would prefer to fly today, happily because I had moved so fast not many others had made it to the airport so only about 6 of us wanted to move onto that days plane which was half empty. 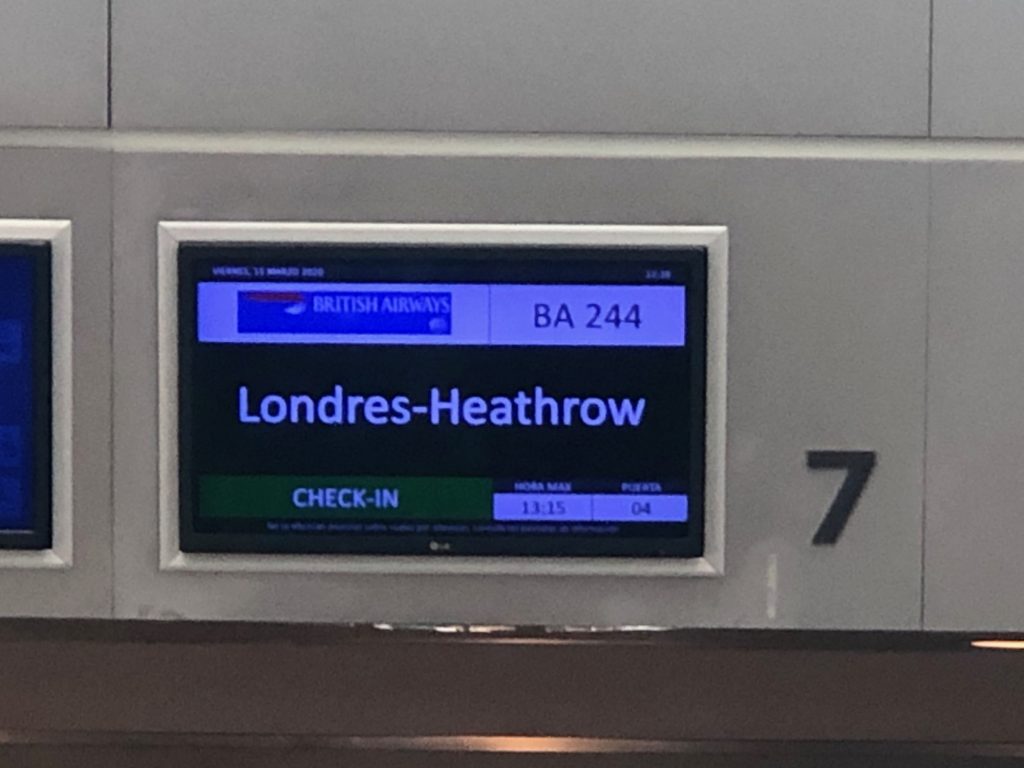 I was so happy to get my tickets and get on that plane, I had a nice aisle bulkhead seat, no one was coughing around me and most were wearing masks so I felt pretty secure. 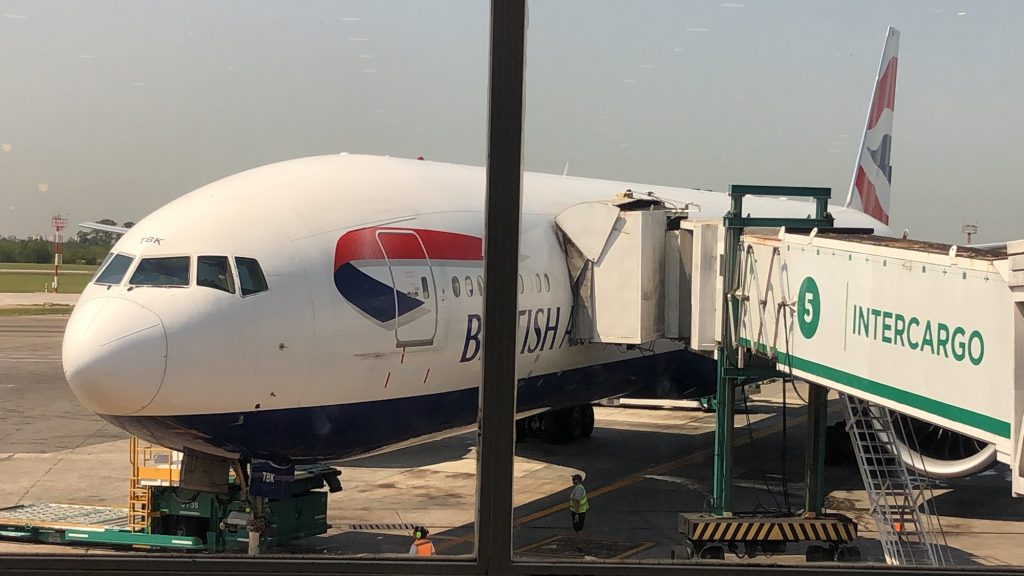 So in the end three and a half hours after I saw the announcement on my phone we were taking off for London on what turned out to be the second last BA flight out of Argentina and I would be back in Edinburgh by 9am the following day.  I was very relieved to be home with my family where I could be useful and support them in a very difficult few months, perfect timing and an exciting end to a fantastic trip.

One of the, perhaps unexpected, effects of a long trip through many different countries is that one appreciates even more how lucky we are here in the UK, as I made my way to my first running group meet up in the park I stopped to take this little picture of the daffodils blooming in the setting sun.  In the past I don’t think I would have noticed how nice they looked 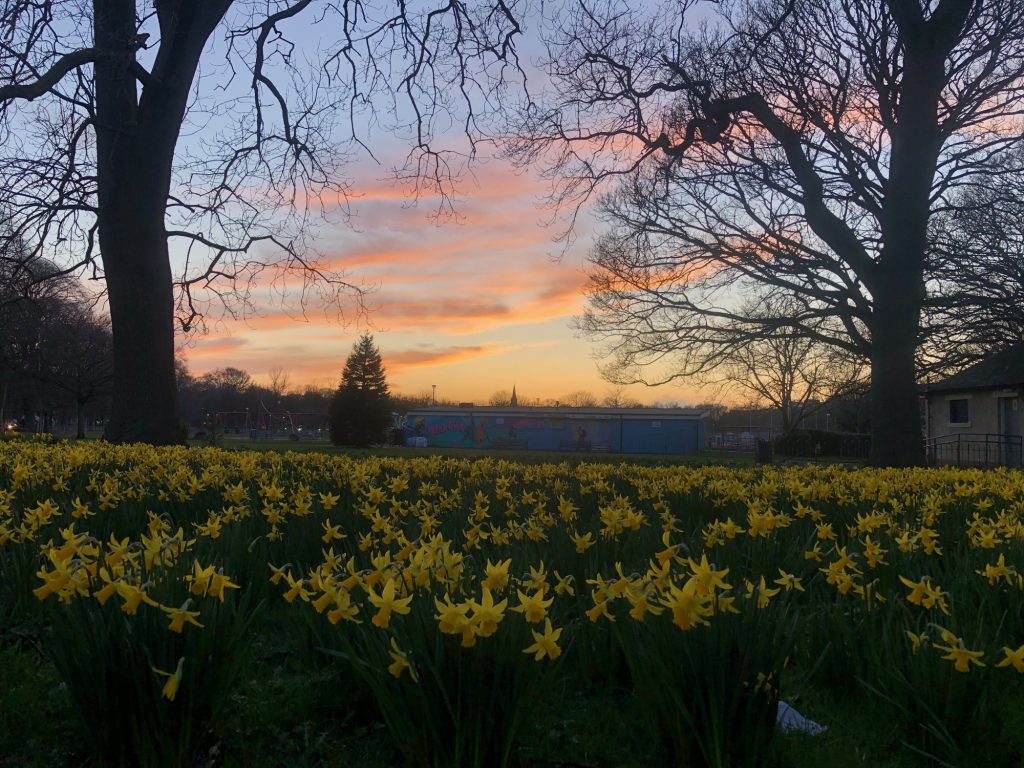 Keep safe everyone, and do the right thing, stay at home if you can, or hunker down safely if you are on the road. 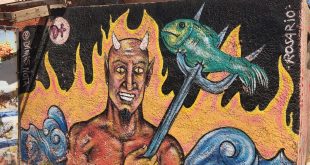 The devil at the beach …