Kathmandu has been an assault on the senses, first of all we had a horrible journey to get here due to a long and difficult set of road works, nearly hitting a dog that darted in front of us, and getting a bit lost in the twisty roads of the market area of Thamel where we stayed.  Every so often in the que on the mountain road one of the local buses would think it was a good idea to go up the outside lane head to head with the oncoming traffic, of course as there was a solid que for about three miles, all that did was create further snarl ups as traffic shuffled to let the offending bus in – they never seem to get a ticket or be forced to reverse so I guess that just encourages the craziness to continue. Although I am normally quite calm in these situations, as its not my country so not for me to get upset about, just to survive, I did find myself cursing under my breath as yet another d-head decided he would leap forward four cars and snarl up the whole system ! 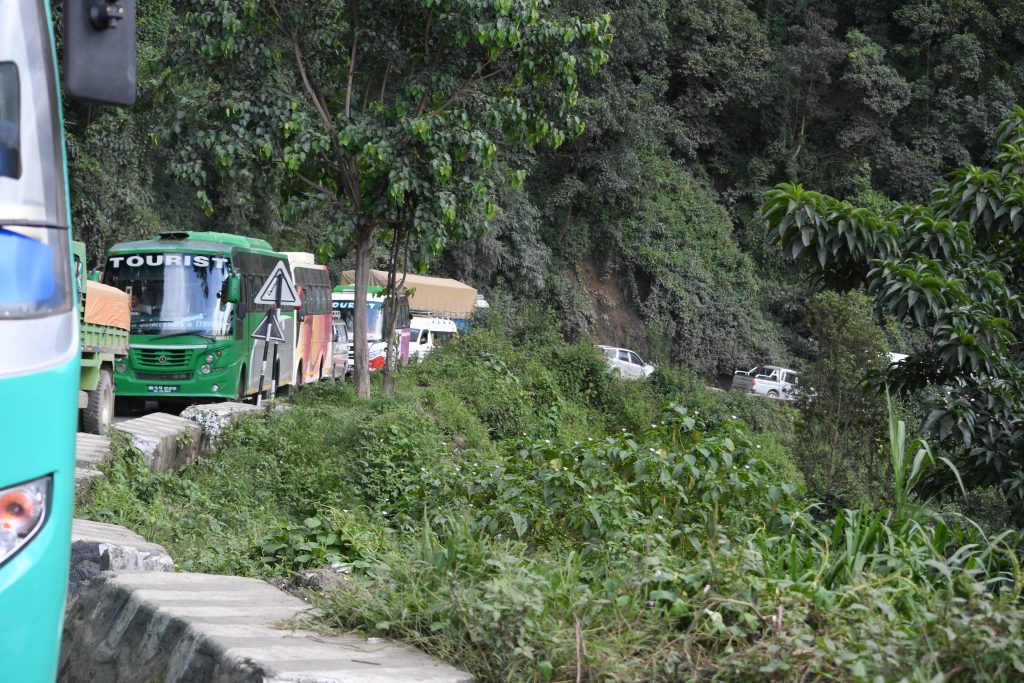 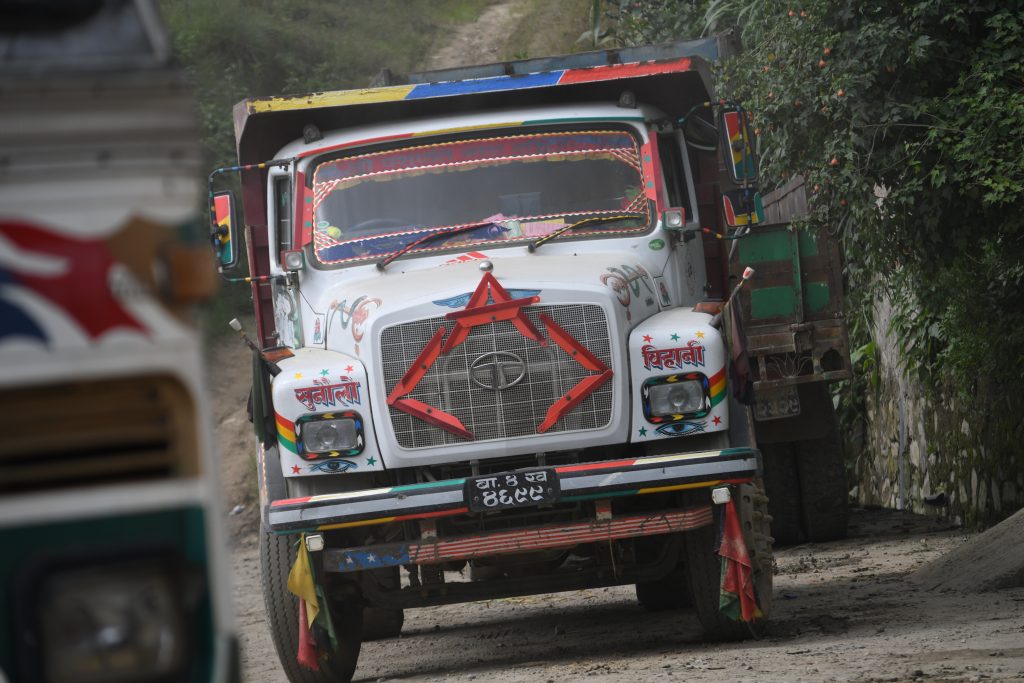 Finally we made it safely to our hotel after some excellent narrow alley recovery navigation by Holly (mum had a sore tummy and was groaning in the back, partly from tummy and partly from the bumps and near misses on the route).  It was the last night of the tour for Lee, Poppy and Holly so we set out to see the sights of the temples in the near darkness, that was not the best plan as Kathmandu is mobbed on a Friday night and the cars, motorbikes and people all mix up on the roads in a random stream of stress and sweat.  Holly had to unstick Lee a few times as she got to points where she could not move!

You may not remember but Nepal, and Kathmandu in particular, was devastated in 2015 by a major earthquake, this has done a lot of damage in the city and many of the palaces and stupas are piles of rubble as you can see below 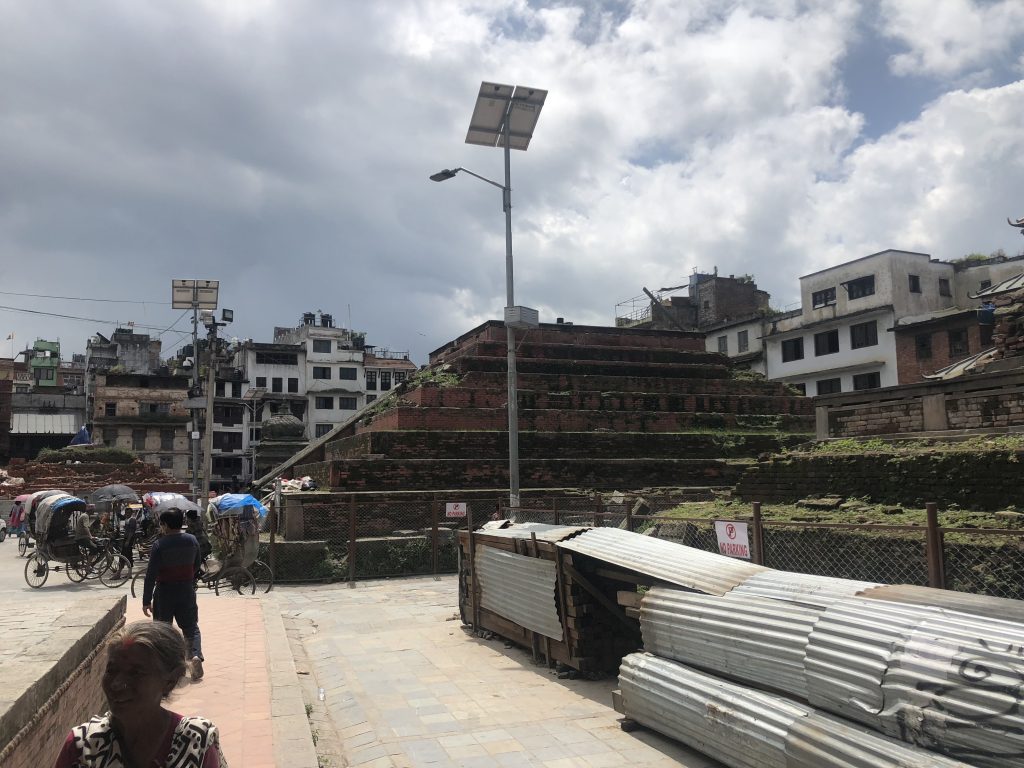 However some of the sights managed to survive, some quite heavily propped up, and many are being restored so that the historic Durbar square is slowly regaining some of its former glory, all over the city there are gaps in the buildings, or even piles of rubble which have not yet been recovered and a good lot of building going on, taken all together the city is a testament to the resilience of human populations in the face of natural disasters and challenges. 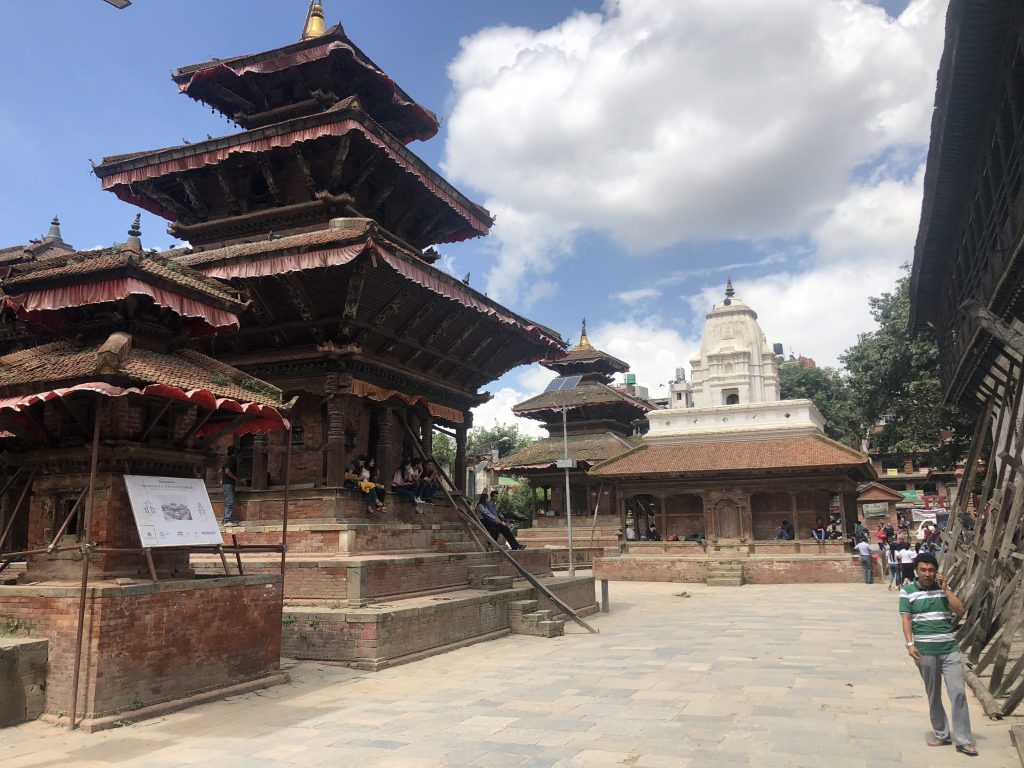 I had the chance to stay on in the city for a few days to get some work done on the steering wobble that has bugged me since the Gobi desert, this has now been traced (we think), to backlash in the steering gearbox (the thing which connects the steering wheel to the actual front wheels) and we hope to adjust this in a specialist garage on Monday before I set off on the return leg.  This gave me the chance to plan out the next phase of my trip and to see some of the more surprising sights of the city including the peaceful “Garden of Dreams” below where I spent a very relaxing few hours with delicious coffee and ice cream having completed some more simple repairs on the Landy in the morning. 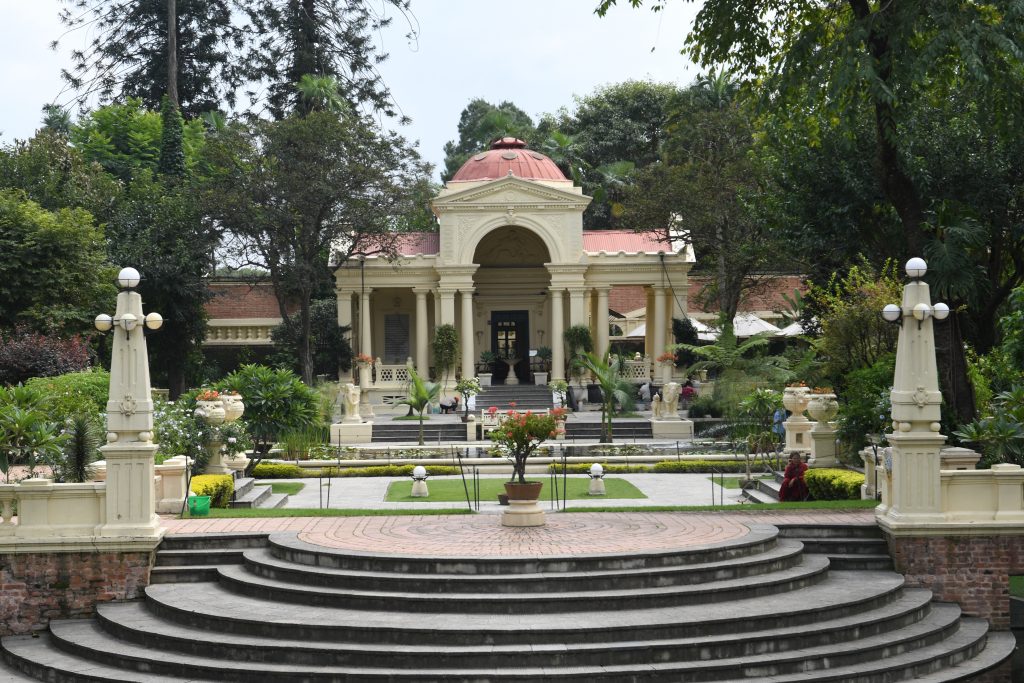 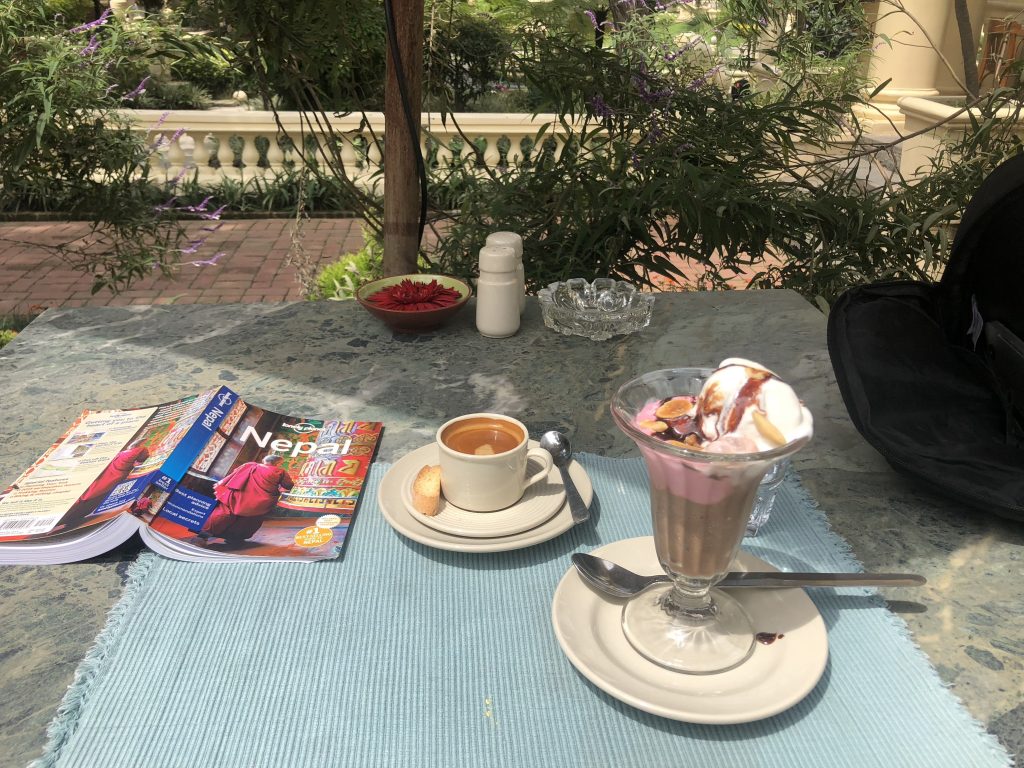 No visit to Kathmandu is complete without taking a tour around the Monkey Temple which sits on a prominent hill overlooking the city, I decided to walk all the way there through the backstreets and the jostle of the city, which was a great way to get a feel for the place over a few hours, but a strenuous stepped climb at the end (good practice for Arthurs seat when I get home).

The overall feeling I experience in Kathmandu is one of relaxed warmth, it is easy to see with such a relaxed vib and holy men and Temples on every corner nearly, how it has been a big hippy hang out for many years. 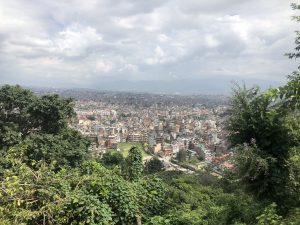 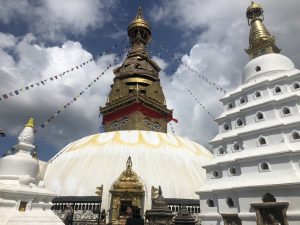 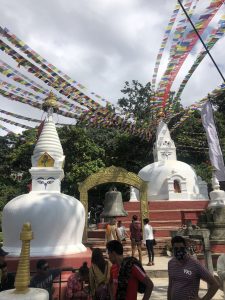 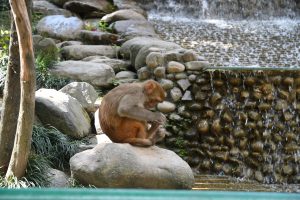 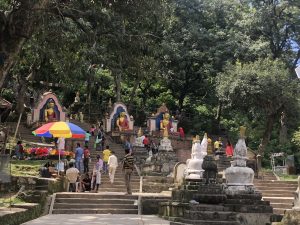 Kathmandu has its downsides, the horrible mix of cars, motors cooters and pedestrians on the rough roads is actually a bit scary and air quality reminds me of China 20 years earlier.  The streets are a blur of apparently identical souvenir shops, climbing gear shops and restaurants, mixed in with Temples, shrines and general chaos, but the people are tourist friendly if a wee bit pestering and I did not feel at all unsafe personally apart from ducking and diving in the traffic. 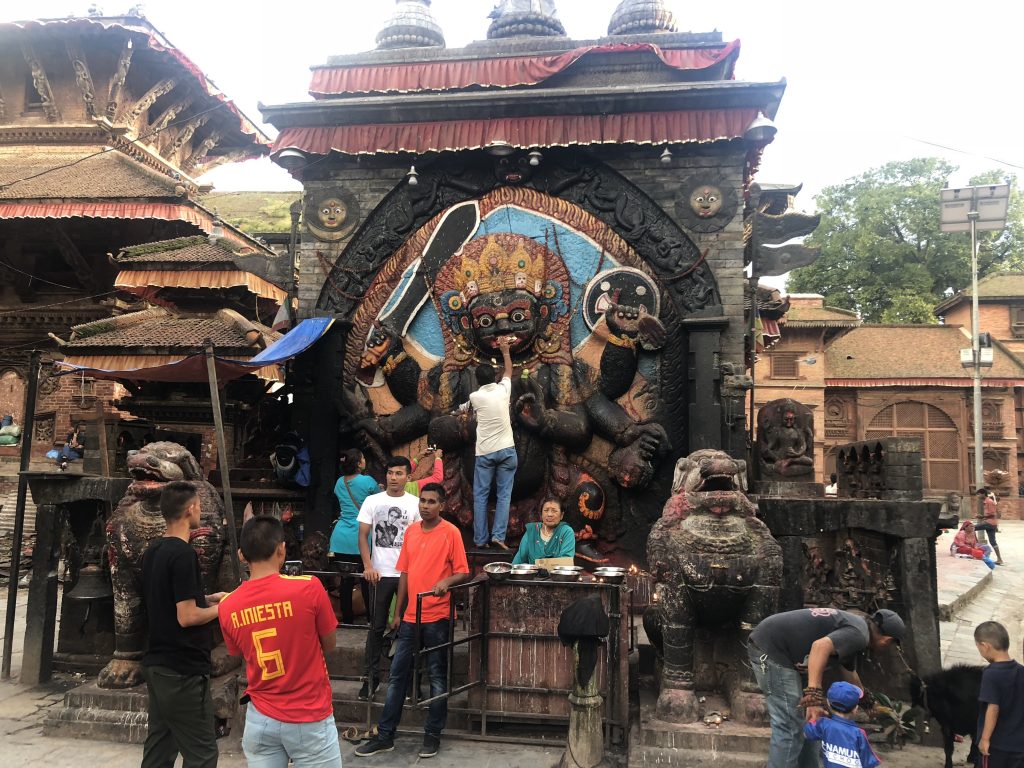 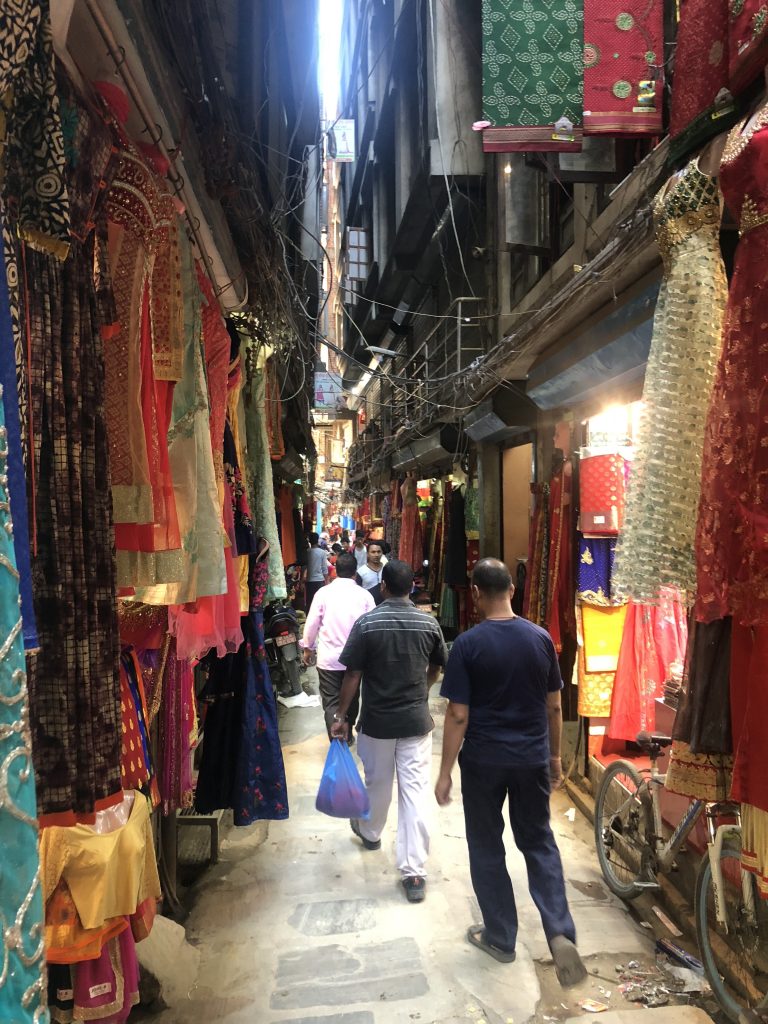 After a few days I grew to really like the place, but with the terrible pollution which is apparently worse in the winter months its a super interesting and challenging place to visit – but in a tourist friendly cafe society way – but not a place I would want to live.  However after the bleakness of the Pamirs a nice latte and an ice cream sundae are not to be underestimated and English speaking waiters and menus do make life a lot easier!

Previous Annapurna and Pokhara
Next A meeting of explorers