This is a picture of Nelson our land rover on the day I bought him at a motorway service station on the way to Edinburgh from Barnsley. The first step in the creation of the overland camper was the selection of the right base Land rover.

This is a 1996 Land Rover Defender 110 van, with only 36k miles on the clock from new and pretty much in mint condition, the key elements which led to the selection of this particular Defender were 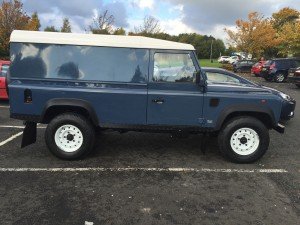 So that was the basis of the conversion and took four months of searching before I found it at Silkstone motors in Barnsley, probably paid a bit much for it but if you are going to live in the truck in the future you want to start with a solid foundation !

This site uses Akismet to reduce spam. Learn how your comment data is processed.