Fizzy Mares Milk and an Eclipse

Getting back in to Kazakhstan was very easy compared to the Mongolian border we crossed at Semy in a few hours, but this time instead of heading down the diagonal route to Almaty which I had done before, and was painfully full of potholes, we headed to the capital city Astana on what we hoped was a good road. It turned out to be mostly true however some parts of the road were being resurfaced and in those areas the main road was diverted across fields and hard core surfaces with big potholes and flooded out sections. We were lucky to be in Nelson but even had to engage low ratio and diff locks to get through some of the worst bits after a heavy rain shower flooded one section. Usually I am amazed what the local people will get through in trucks and Ladas, just through skill and practice, in this case everyone but us was stopped by the flood and was just waiting for it to go down or a bulldozer to be redirected to fill in the hole – this happens surprisingly quickly as the traffic builds up if its not fixed – but at least it did afford me a small smug moment as we waded through leaving the local traffic behind.

In Astana, a nice enough place full of grand new buildings, we stayed in an apple hostel so I could get some things done on the car and Tony could do the sights

I went to Land Rover dealers in a first attempt to source the problem of the wobbly steering. We had to wait until the next morning to get the work done and when that came I had a nice time in the dealership with some wifi and an endless supply of coffee while Tony sensibly explored the sights of the town. 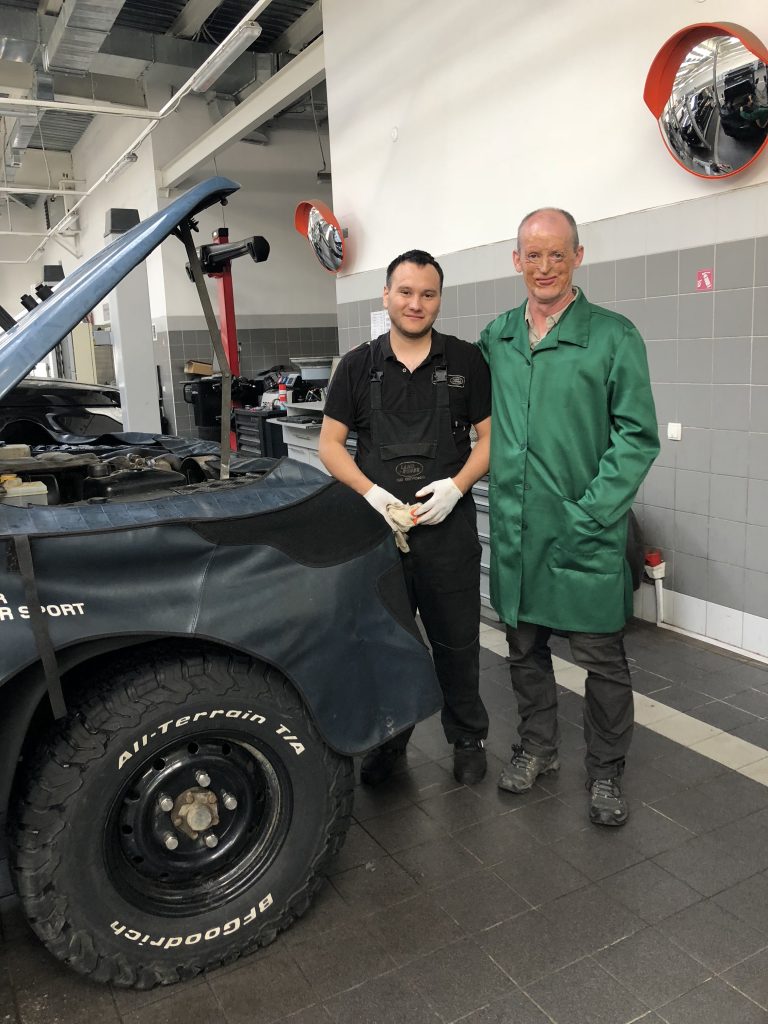 Unfortunately the Land Rover dealer network in this part of the world is pretty useless for Defenders, most have not even seen one for many years, so I had to work with the mechanics to do the service using my spare parts and my knowledge to adjust the bearings which had come a bit loose on the desert, they diagnosed the steering wobble to a loose joint but did not have the spare parts, and it was the one spare I did not carry (drop arm ball joint) – however we were assured that it was possible to get this part in Almaty at the Britpart dealer there. So in the end I got a nice car clean and a service I could have done myself much more cheaply, but the valuable assurance that nothing dangerous was going to fall off the steering and it was safe enough to go ahead. 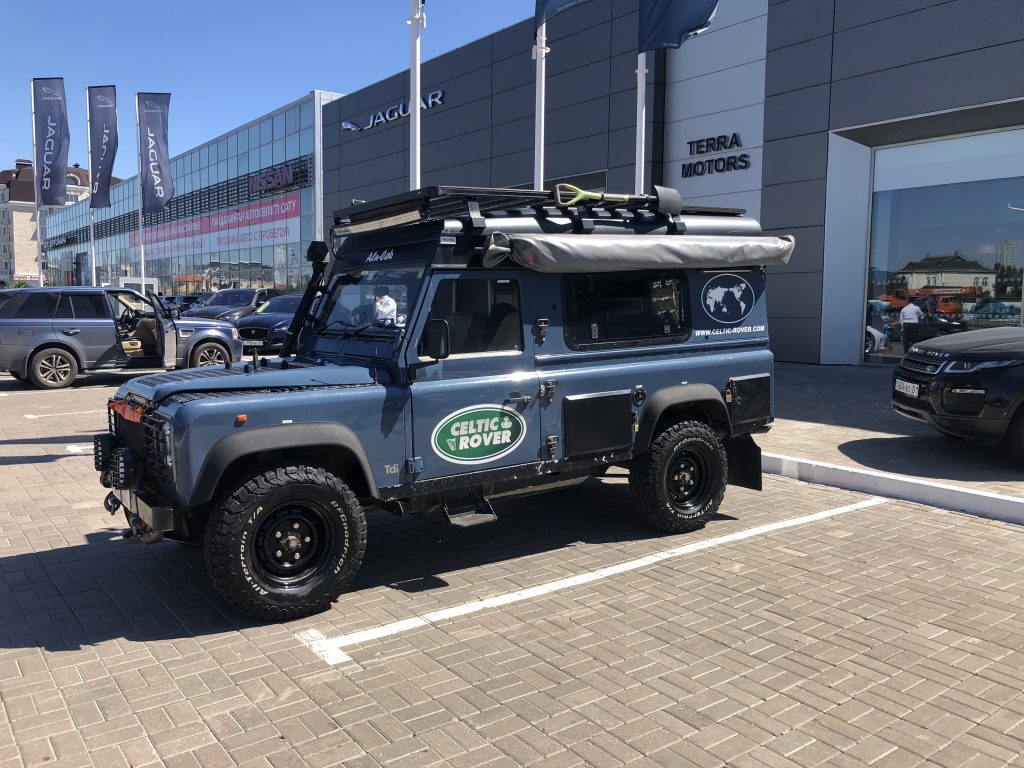 While I was enjoying air con and coffee and having my picture taken outside the dealers Tony had connected with an American backpacker called Eric and the three of us went out for a traditional Kazak meal including smokey fizzy mares milk, camels milk, and goats milk with various meats including horse meat, and some lovely bread/doughnut type things which were very tasty. 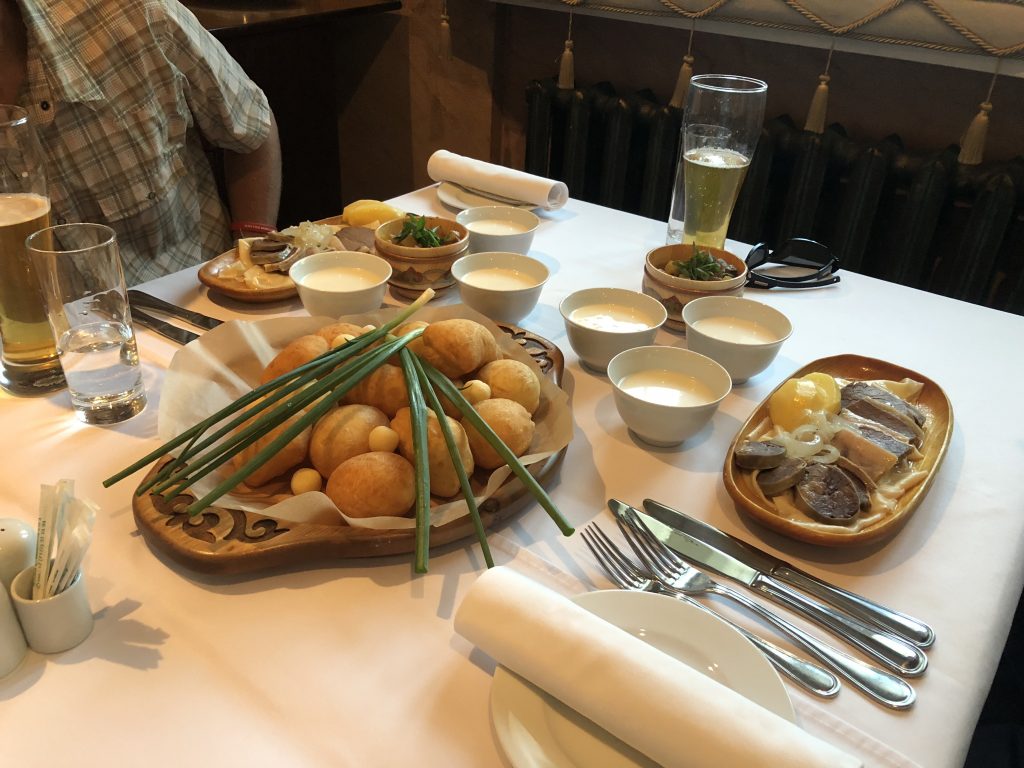 We went for a walk around the downtown area of Astana and it had a really nice atmosphere, lots of busking, people walking around and a really friendly vibe to it with a lovely promenade along the river front, you really get a feeling of a young persons city with a very forward looking and cosmopolitan view on the world, modern Kazakhstan at its best really. 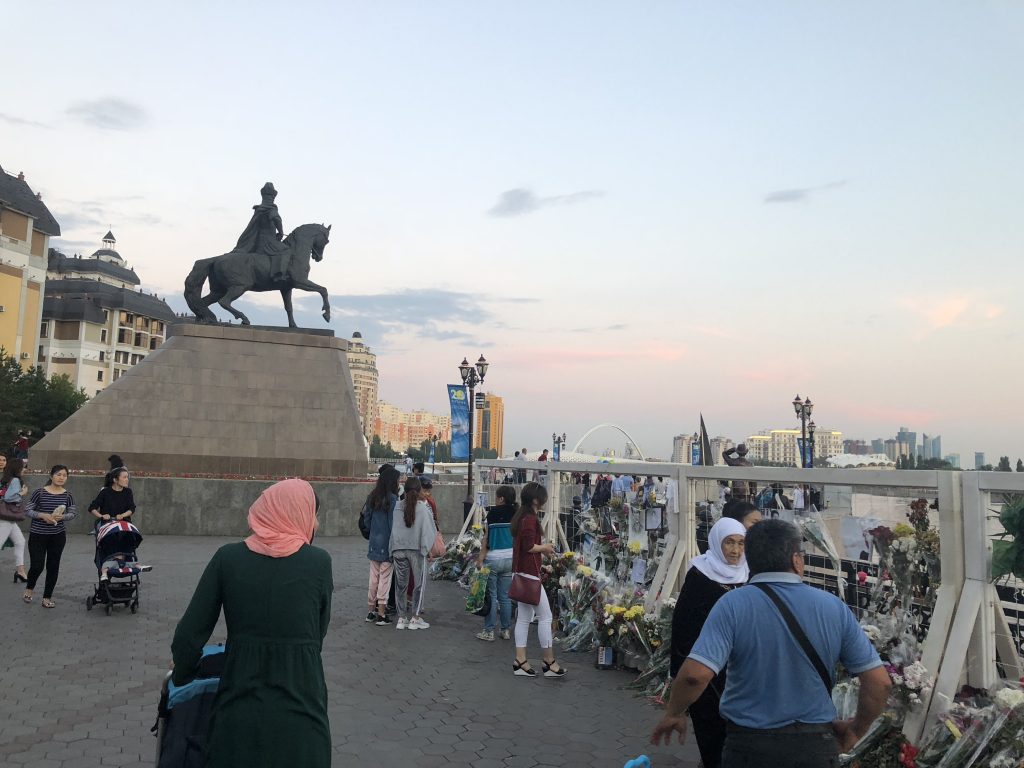 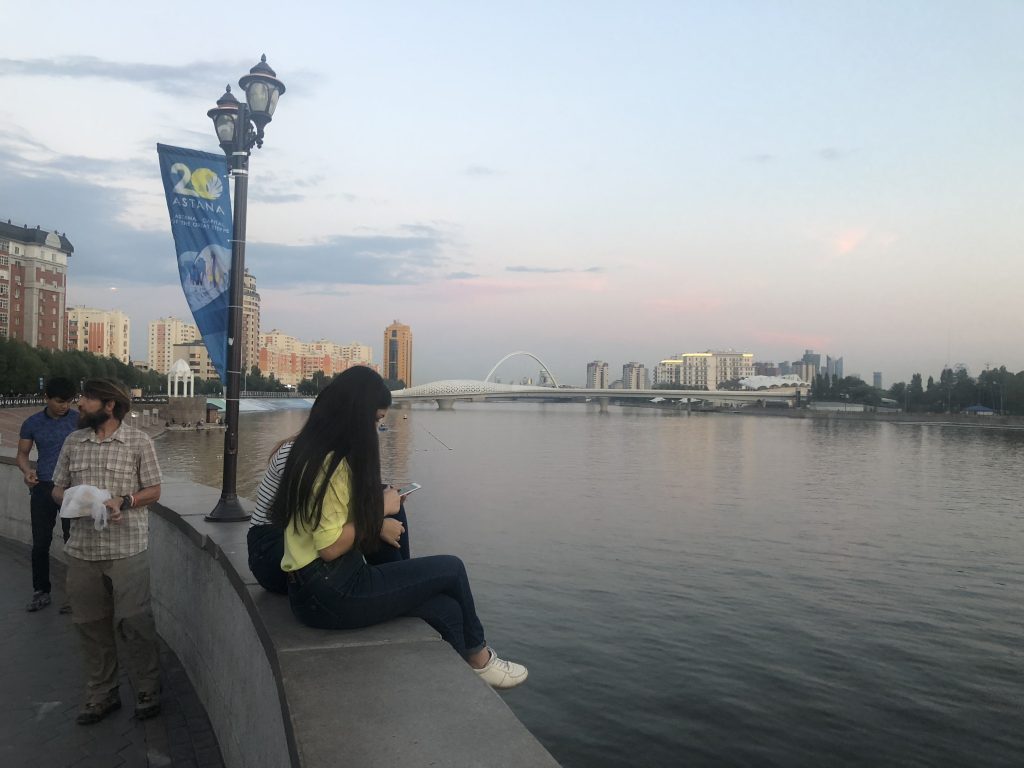 It turned out that Eric was on a bit of a career break tour and had been to the world cup in Russia, the law was being changed so that he would be able to return to Russia visa free in a few days but he had taken a flight to Astana to wait for the law to be adjusted so he could continue his journey on the trans Siberian train. As we got chatting he expressed some interest in Almaty so we ended up with an extra passenger for the two day trip to Almaty, we stopped over on the shore of lake Balkhash. This is a weird lake as it was in the past a testing ground for Russian missile development and torpedos as it was well away from western eyes, this all stopped when Kazakhstan was made independent so the lake is dotted with abandoned Russian military bases which are mostly crumbing and in decay apart from a few which have been converted into “Butlins” style holiday camps for local people.

That night was the night of the lunar eclipse so we all set our watched to get up again at 2am to see the shadow of the earth take a bite out of the moon for a few minutes before falling back to sleep, could n0t get a decent picture of the eclipse but the below from earlier in the evening is nice and gives an idea of the view over the lake. 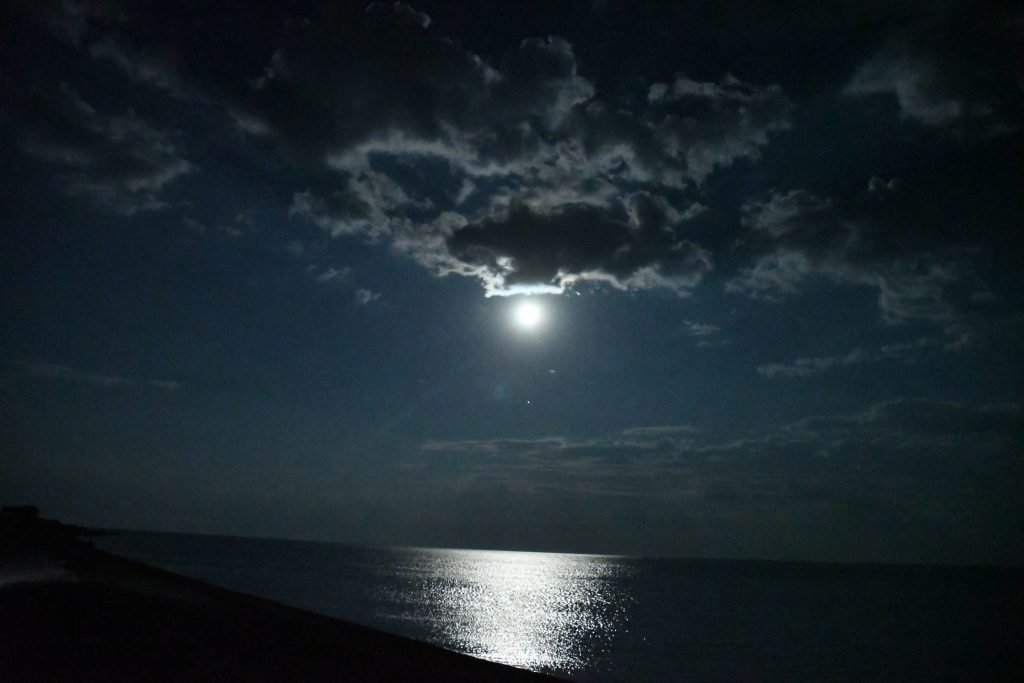 The next day we made it back to the Amigo hostel in Almaty, we had to wait for a day for the Britpart place to open but they had all the spares that I needed so suitably stocked up we headed off to Charon Canyon heading to Kyrgestan saying good by to Eric. Just before I left I met up with Tony at a very well recommended western style restaurant and coffee shop in the center of town – they had a burgers and after weeks of eating camp food or locally I succumbed to the temptation ..but there was some salad in the burger and I would regret that choice for about a week…

Thanks to Tony for many of the pictures 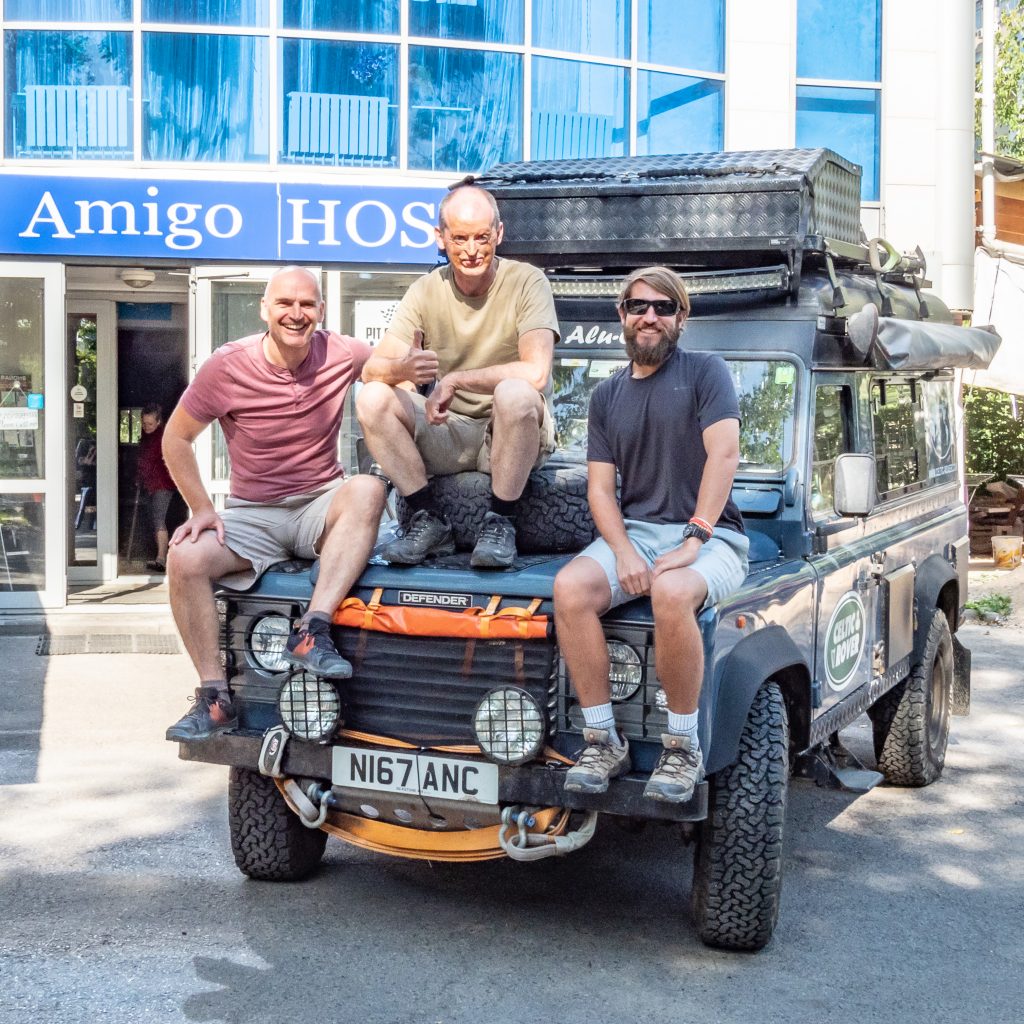