Today was our first full day in Kyrgyzstan, before I came here I had been told this was the most interesting and pretty country of all the “stans”, which is a tall order after the lake district of Kazakhstan and the Altai region which I have raved about already, but even after one day I can see that this might indeed be true. Our crossing of the border into Kyrgyzstan was a record for this part of the world, 21 minutes from driving to driving. We drove the short distance to Karakol on the shore of Yssyk Kul lake, which is one of the biggest high altitude lakes in the world, ringed by mountains easily as spectacular as the European Alps at their best, it continues to surprise me that I had not before this trip even known of its existence or of the mountain trekking paradise that surround it before planning for this trip. 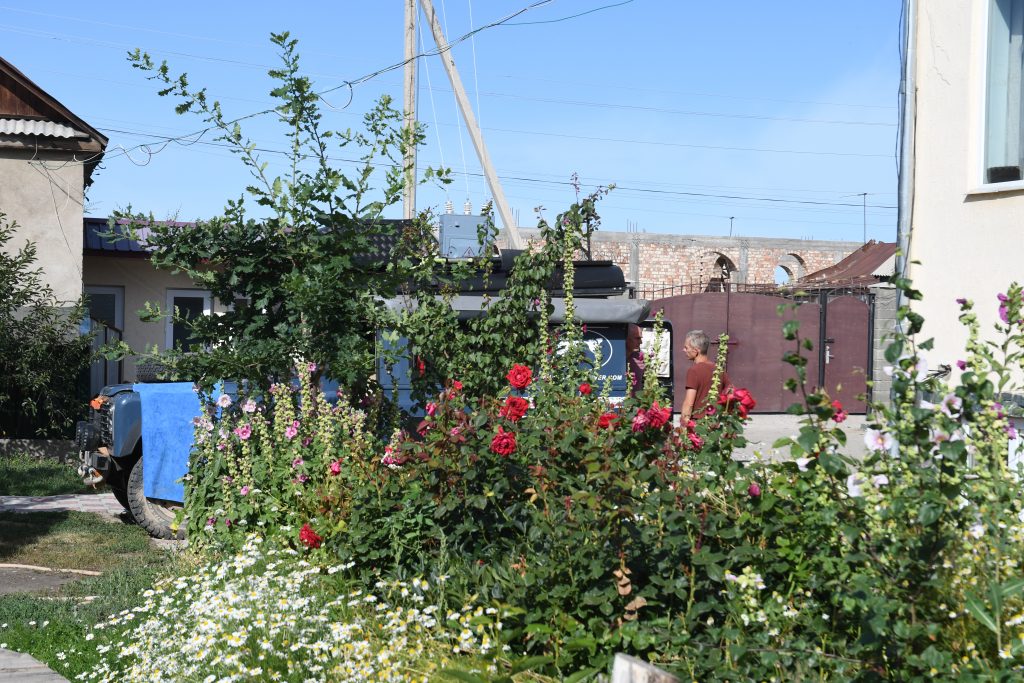 After staying at a lovely guest house in Karakol called appropriately The Riverside (run by a German guy who has a courtyard you can park in with excellent wifi, the first for a month and good showers) we left and travelled a short way on the shore road along the lake to the valley of the flowers, Tony took this nice picture of some local ladies as we turned off for the valley.

On the way we were able to shop at local markets for fruit and vegetables, we find in this area that the markets are much better than the supermarkets for both bread and this type of produce 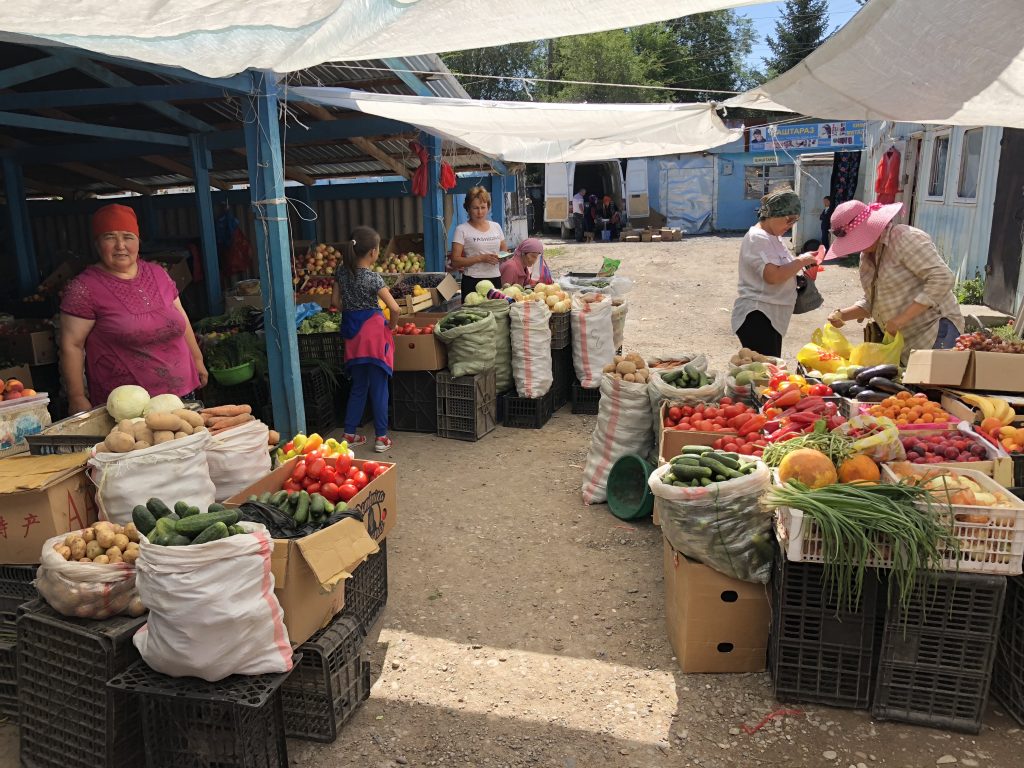 As we approached the valley we could see massive snow covered peaks with glaciers sparkling in the sunlight in the distance. In the valley itself we came across a massive rock (small hill) that has at some point split in two, the local people call it the broken heart and you can see why from the picture below. 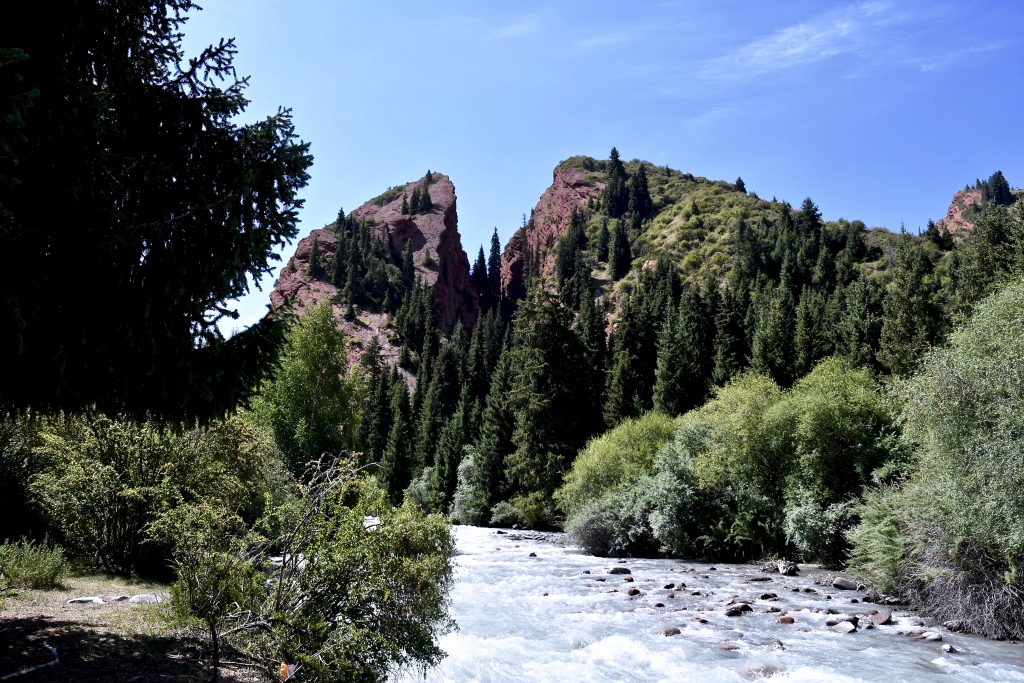 This is a common place for people to stop and so some local boys had brought along their pet birds, one of which was an eagle, to pose with tourists. Tony crossed some palms with silver and managed to get this super picture of the eagle in front of broken heart mountain and on the bonnet of Nelson. 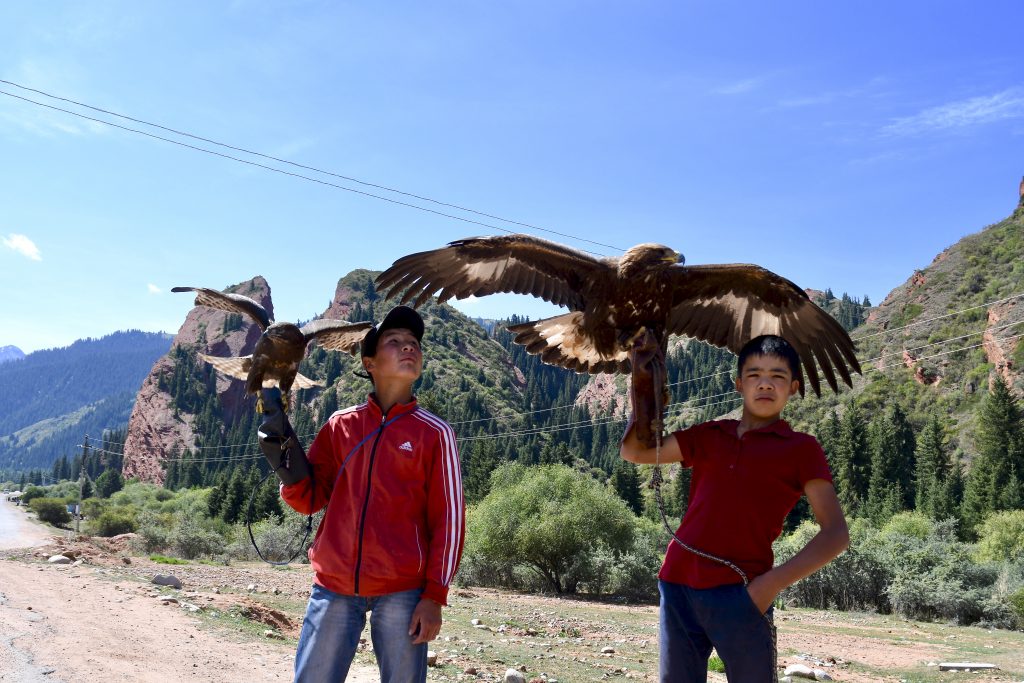 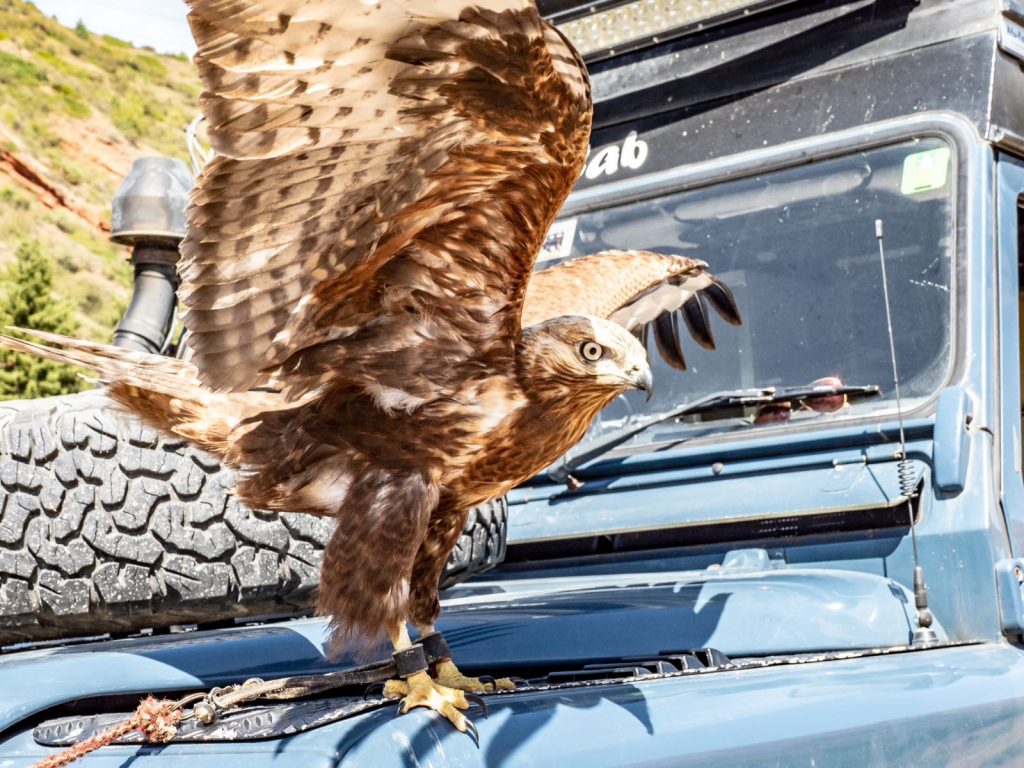 Further up the valley we came across an area where local people rent horses for folks to tour the mountains, it was quite a sight when the competing sellers all jumped on their horses and followed Nelson along the track for a few hundred meters.

We then carried on up rougher and rougher tracks cutting up the valley and criss crossing the river on tree trunk bridges to a hidden valley a few miles above were the trekker’s minibuses stopped. That extra distance thanks to Nelsons goat like ability to bounce up rough track, this meant we had a peaceful camp overlooking a fast running mountain stream, with a good camp fire and wild horses grazing around us.  I took the opportunity to catch up on some washing in the stream 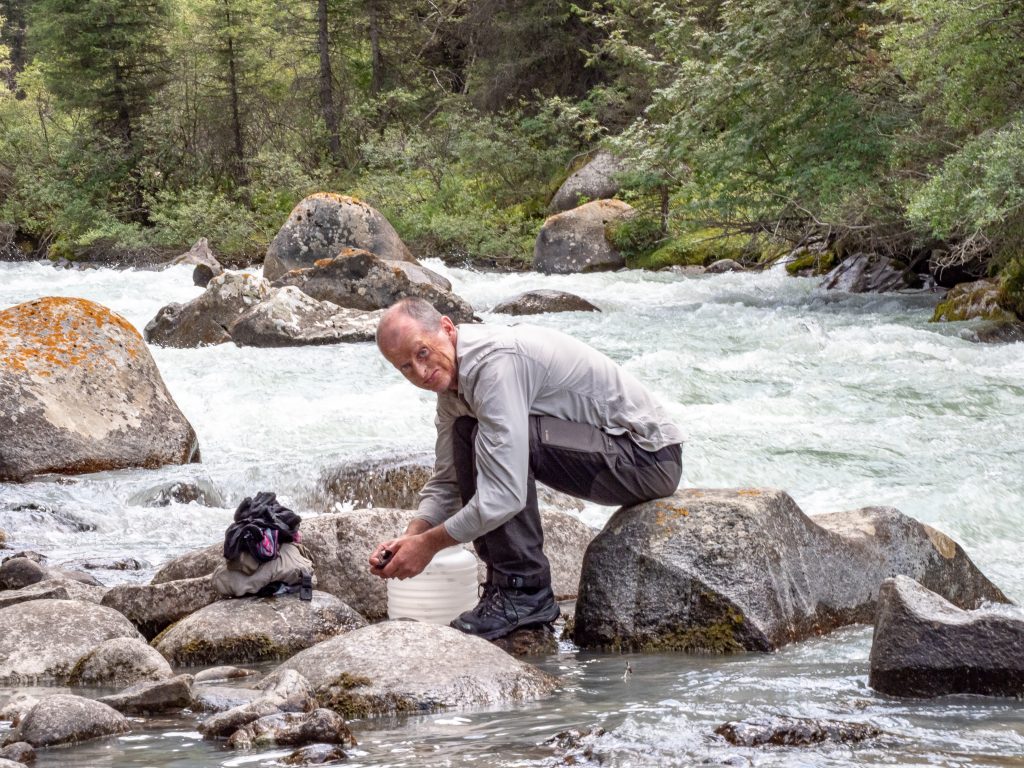 Occasionally on of the local boys would trot past on their horse and wave hello but mostly we were left to enjoy the rush of the stream, the warmth of our campfire and the tranquility of this beautiful valley. 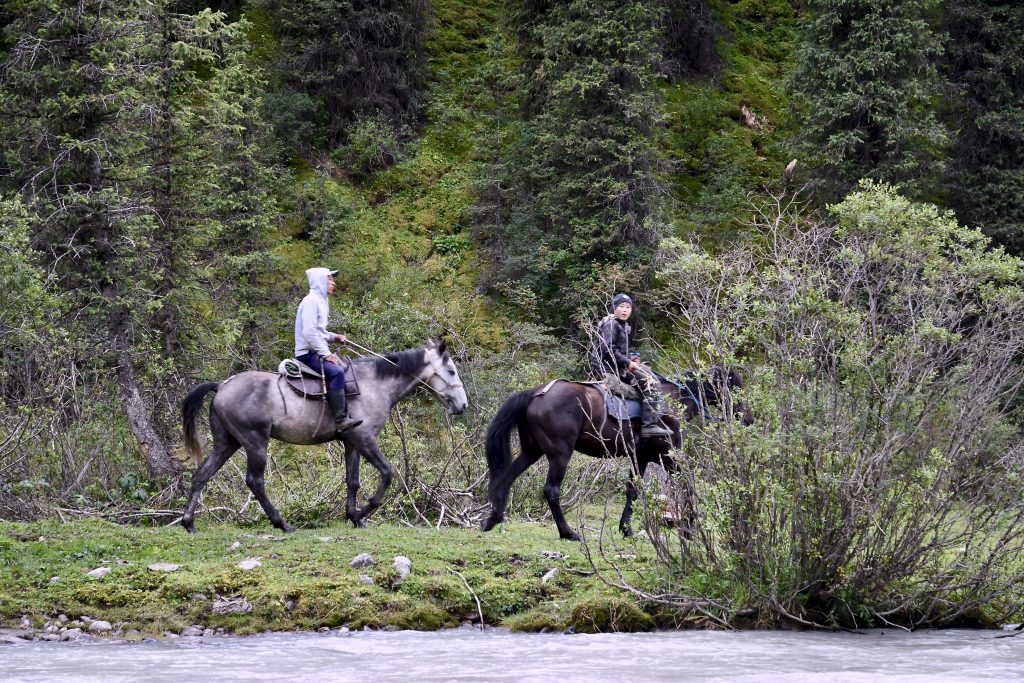 The local people seem to ride their own horses from a very young age with great skill its good to see that a lot of the nomadic traditions are still strongly maintained. 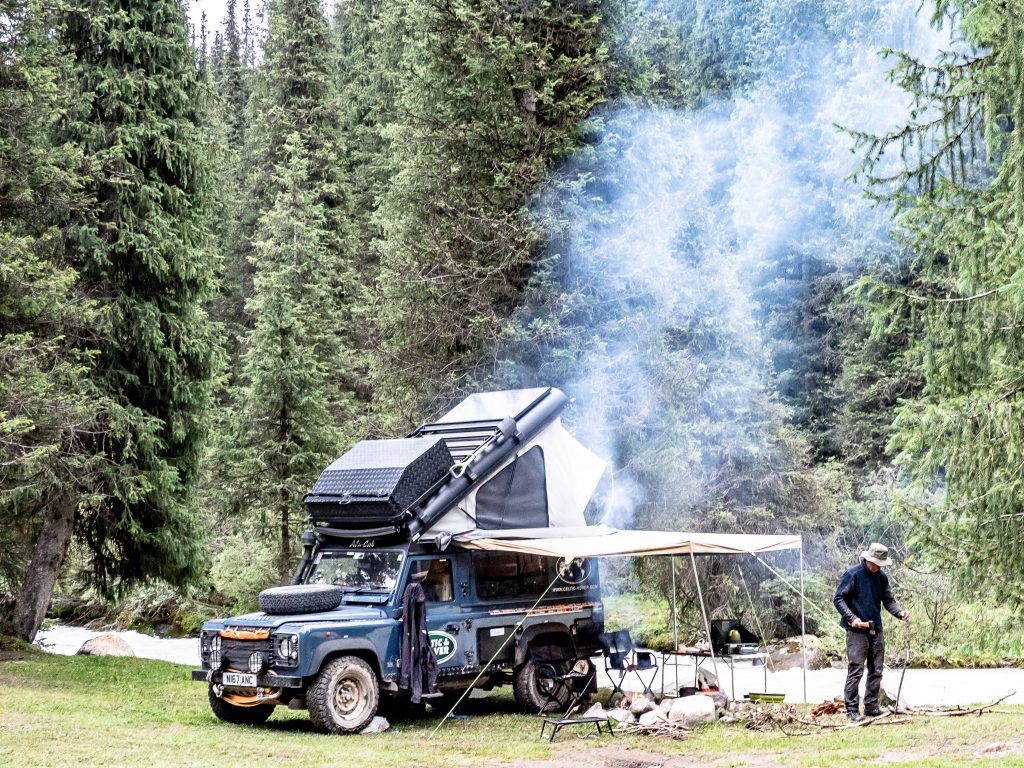 The campsite was really tranquil and it was a nice change for us to get there in mid afternoon, this gave time to make a proper fire and relax for a change.

On the way up we met some Overlanding group trucks and swapped stories and route information, they have always proved to be very friendly when we meet up with them.

So the valley of the flowers, near Karakol on the south eastern shore of Issyk Kul ranks in the very top of our campsites for the whole trip.

Previous Fizzy Mares Milk and an Eclipse
Next CHARON CANYON