After our off road adventures in the Atuel Canyon and Hermoso valley we headed back down the mountain to make our way to the Argentine/Chile border with a view to stopping in the wine region of Chile.  That meant working our way out of the Hermoso valley along the steep and narrow road up to the pass which is closed for six months of the year.  As usual I was thankful for low ratio high clearance and four wheel drive as we scrabbled up the tight hairpins on the pass, and, as usual I was humbled by seeing the occasional family in a normal Renault coming the other way.  It is a reminder that many folks do all the same tracks I have done in normal cars every day picking their way gingerly along tracks we would not consider passable by regular cars in the UK. 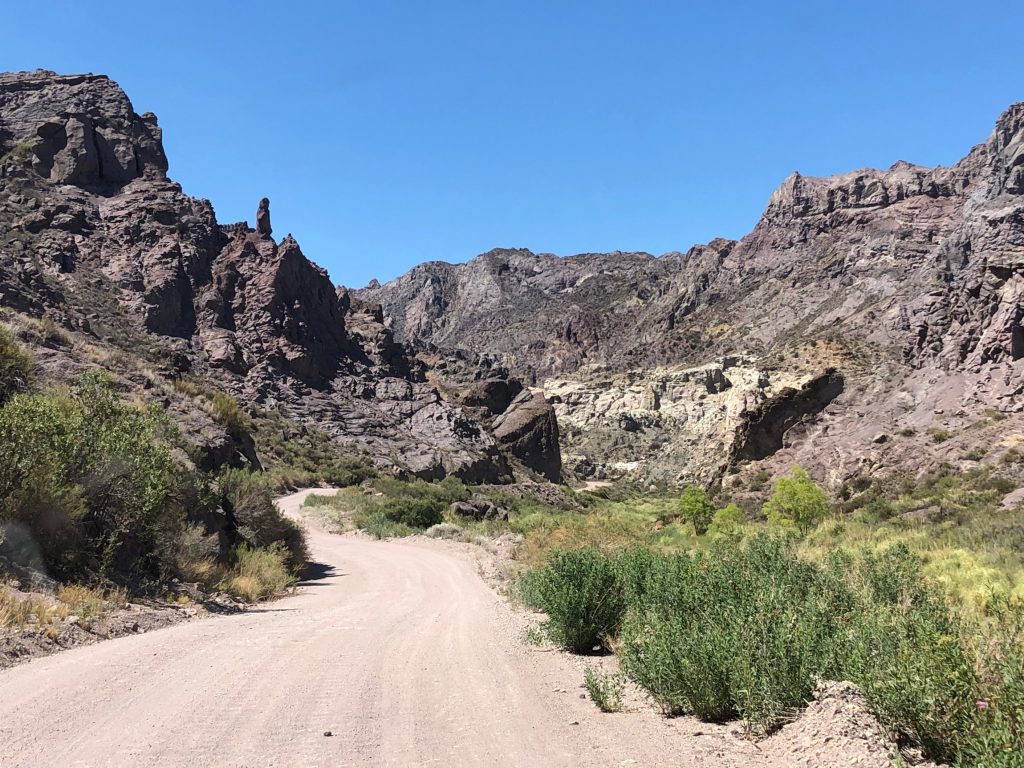 We worked our way back down the hill to the ski resort of Las Lenas and then on to the main Route 40 that took us south, its a pretty flat and easy road here (unlike up at cachi where it was tough rippled gravel) and the time passed easily to the turn off for the border.  It was about 4pm when we reached the border post to exit Argentina where we had planned to camp overnight but the campsite there was dreary and facilities were closed while on the road the wind was arguing against camping in the open treeless countryside.

One of the good things, among many, of travelling with Lee, is that we have pretty much the same instincts so it was an easy decision to cross the Argentine exit border and head 20km up a side road to some thermal springs for the night, technically in Argentina but we had stamped out of that country and before the entry to Chile.  Our night in no mans land went well the campsite was up a gravel road in a lovely valley with a few fords and a rickety bridge to contend with so a little bit more adventure was added into the day and the people were friendly (as usual) engaging us in discussion about all the flags on the side of Nelson.

We are in our camping groove now, happily trying out one pot recipes (in this case greek salad followed by garlic chicken and rice) and enjoying the freedom of sleeping secure in our own truck.  In many ways we both prefer to camp in the truck than to stay in hotels as it is an uncluttered and simple life with everything we need easily to hand, in the mountains there is no internet connection so we enjoy a break from blogging news and facebook as well.  I do admit to enjoying blogging and waking up to the sound of the morning news on Radio 4 some days but a day of peace from it all is also welcome.

The next day we headed down to Chile back along the narrow gravel road and on to the border post, it is a constant delight to cross borders in South America as it usually only takes about an hour or so, the people are lovely and friendly, specially when I try my best to speak Spanish, and the flags on Nelson are a constant talking point and smooth the way through the searches and checks.  I think my relative age (not likely to be a drug runner) my odd looks (not likely to be a terrorist) and the credibility of the truck with it flags (serious traveller) really help to smooth the way through borders – or perhaps travel has just made me relaxed with the necessary formality of it all.

As we head away from the border, and completely unresearched, we see a plume of spray flying up into the air near were some cars are parked on the edge of the road so we stopped for a look.  I am glad we did as it was the first time in my life I saw a substantial waterfall reversed by the wind and blown up a cliff face that was invisible from the road. 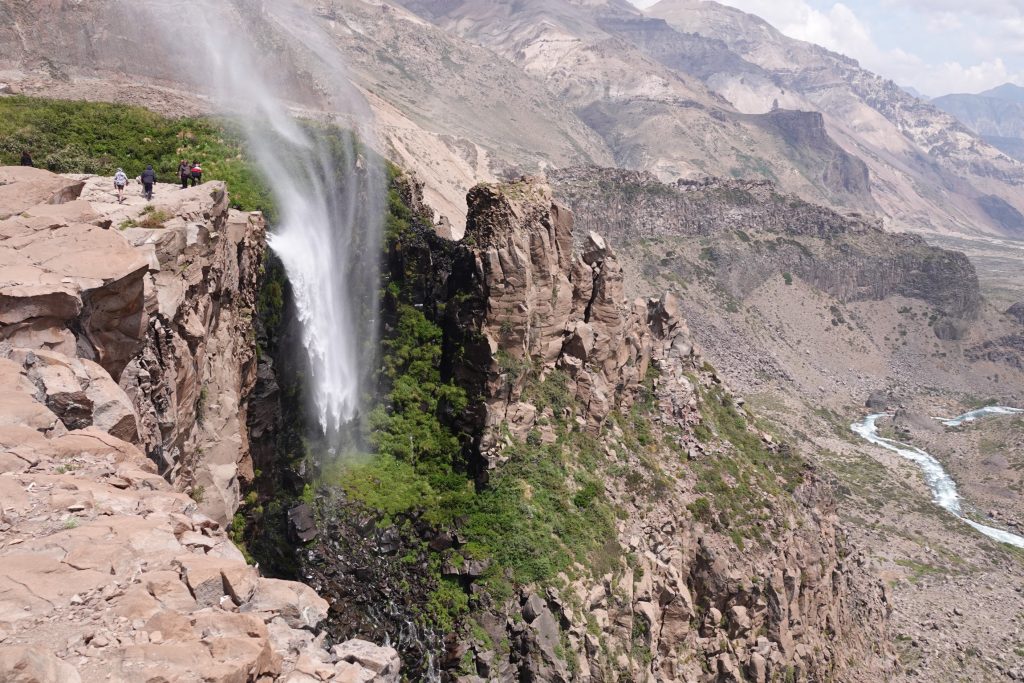 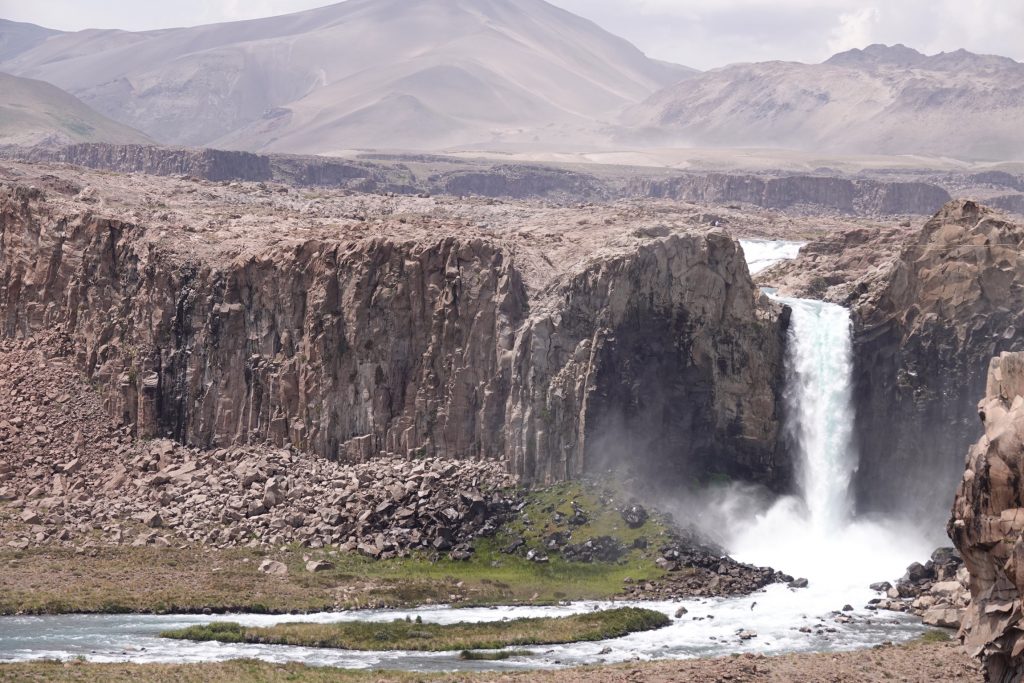 Happily surprised by these lovely and unplanned walks along the cliff edge we manage to find a supermarket in the first major town.  Shopping in supermarkets is, sadly perhaps, one of our favourite calibration points in a new country, we enjoy seeing what is the same and what is quite different from country to country and what the local people put in their trollys or baskets.  In Monglian countryisde we could not understand why the supermarkets did not have meat or milk until we worked out that most of the people in there had a couple of hundred goats each – so no point really !  In Chile the supermarket was not dramatically different and my Spanish is good enough to tell the difference between butter and cream cheese but it was fun and necessary as we are not allowed to carry meat, fruit or veg across from Argentina to Chile so we were all out of supplies.

Boyed up by our shopping and a cup of coffee we discarded the plan to stop in the wine region and pushed on to the coast to finish the day on the beach of the Pacific at constitution on a lovely beach campsite which also benefited from a nice cafe and a surf school, it was interesting to see that all the boats were stored up on a very large pier in the background of the photo below, we wondered if this was due to the lack of a safe harbour or a precaution against tsunami, if there was a big wave we were going to get wet as all the tsunami evacuation routes pointed away from our campsite in the bay.  Once again a real variety to the days here in South America. 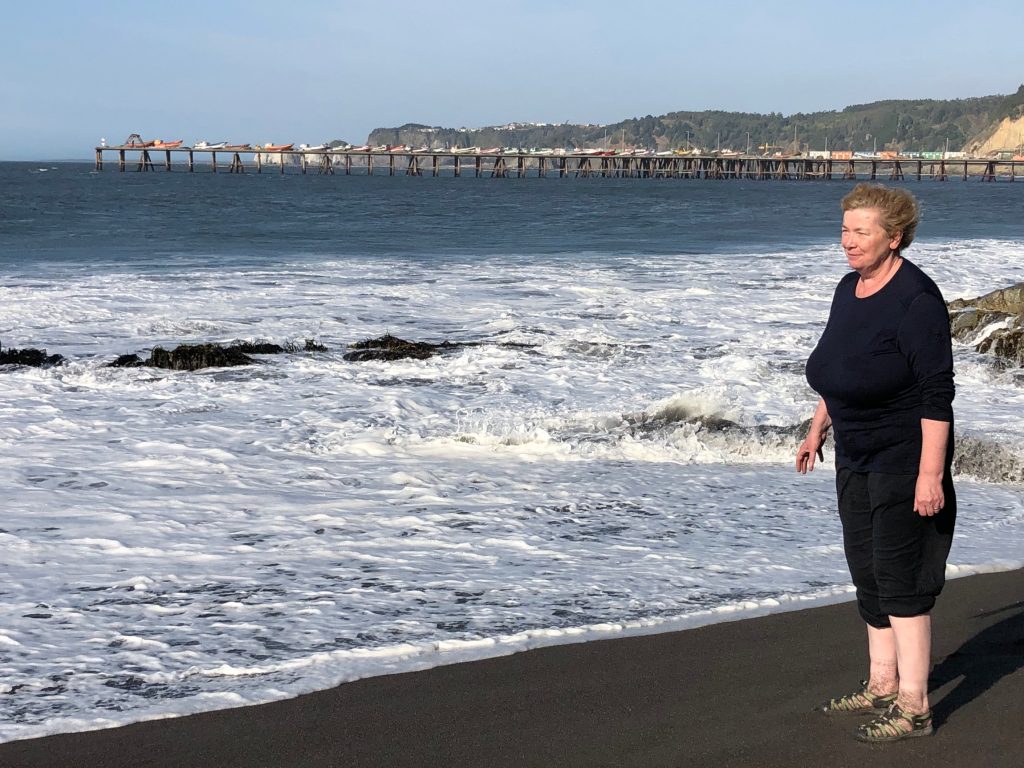