As we started down the Carrera Astral the weather was not cooperating with my plan, this section of the road to the small town of Puyhupui is supposed to be very pretty and the remote hamlet, originally founded by four German families, nestles between massive mountains at the head of a picture perfect valley.  The picture below is taken at night but captures the atmosphere of the valley well a few days later.  On the day we arrived the clouds were low, the rain heavy and the temperature cold enough for us to use the diesel heater in the car. 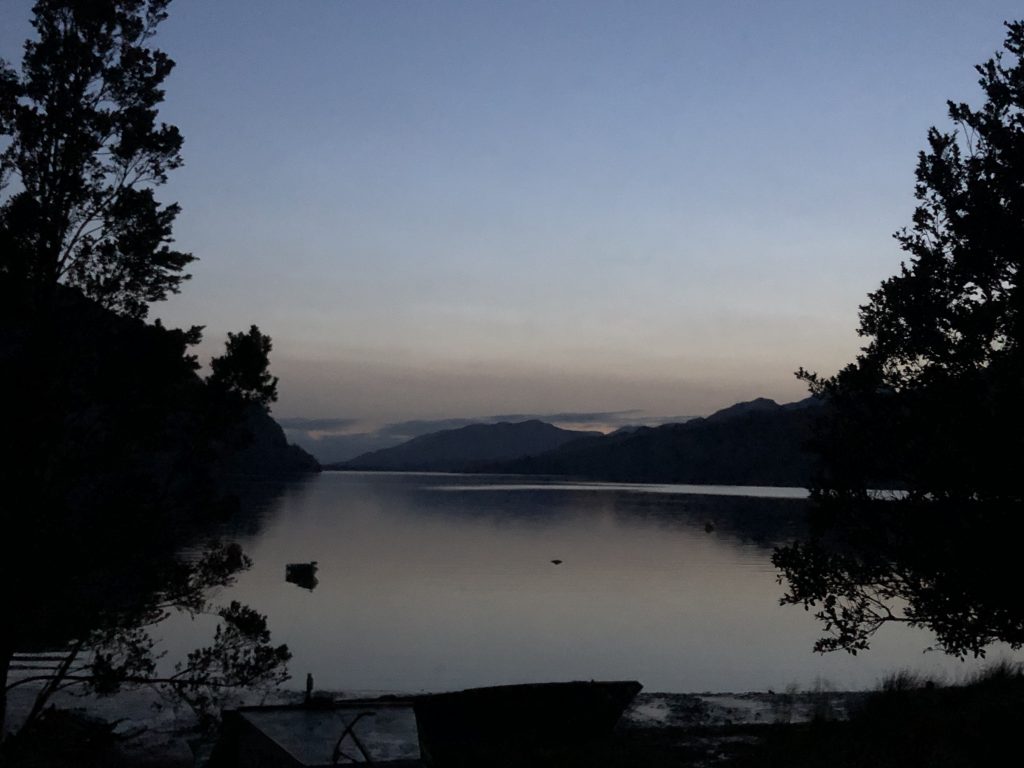 We had gone through the village for a few provisions and made our way to the Queulat NP in order to see the hanging glacier there and do some of the treks, that evening the glacier was visible but ducking in and out of moody clouds 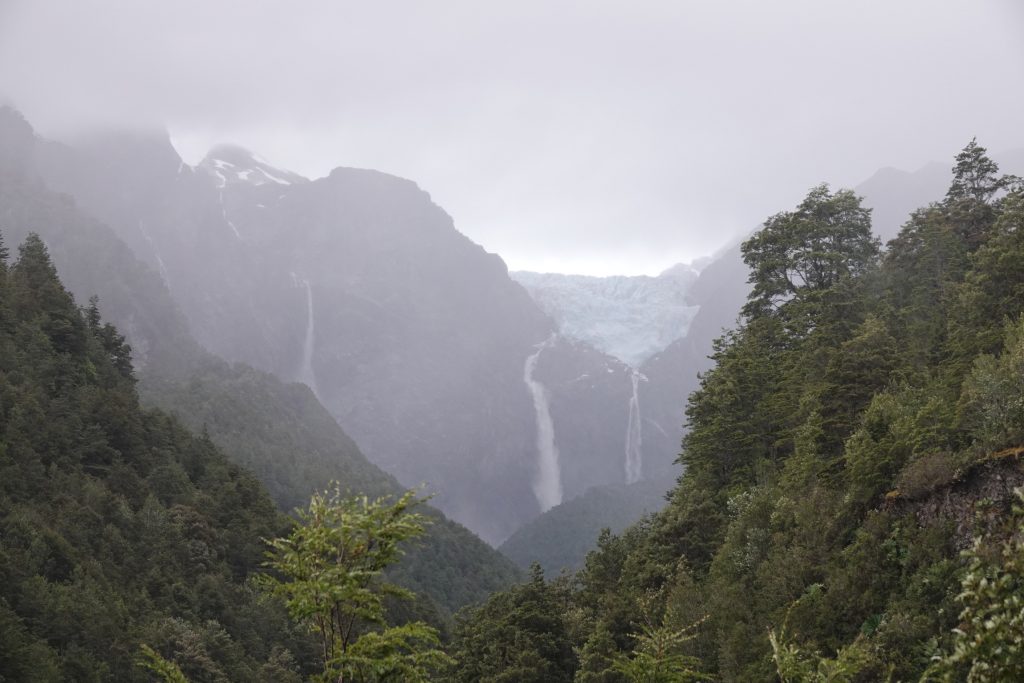 So we headed back to the truck which was in a very nice wooded campsite, there were different little areas for camping and we managed to have one for ourselves  and made some salmon planning for an early night in the hope that the weather would be more forgiving the next day. 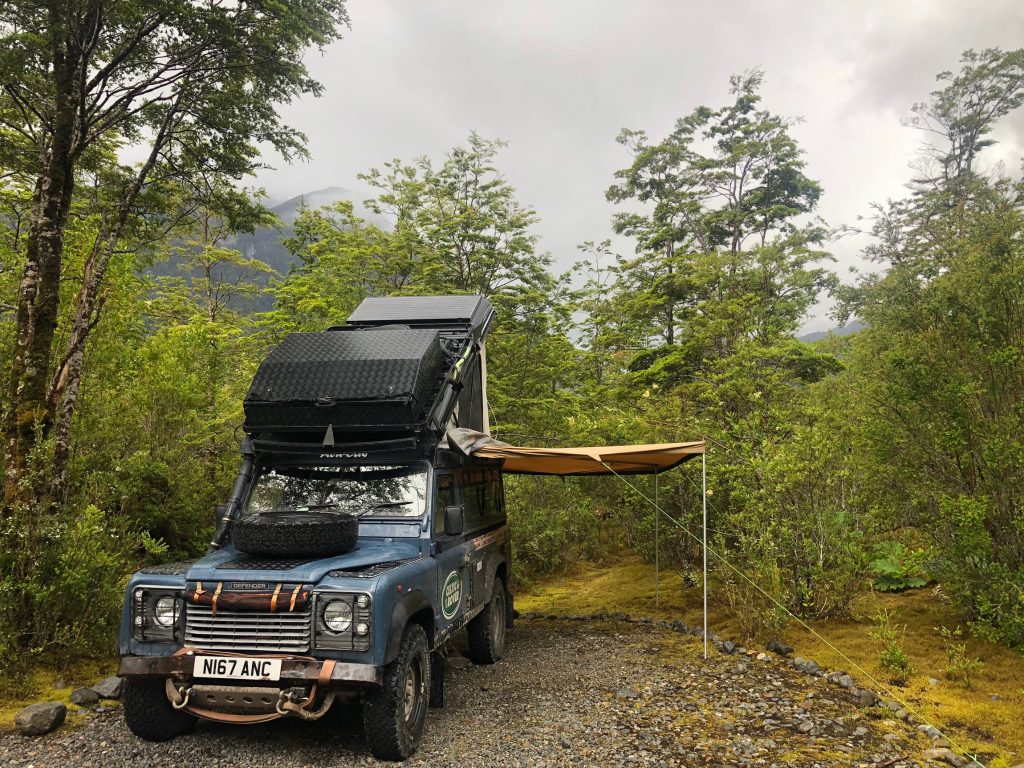 The next day it was still cloudy but lighter and the forecast was for the weather to change so we sorted out the truck and headed up to the parking for the trek.  We were lucky as the weather stayed dry and the trail proved to be very interesting, like a scene out of lord of the rings with knarled tree roots and tight passages in deep jungle style vegetation, lee found a stick to help with balancing her way across the muddy puddles of the track. 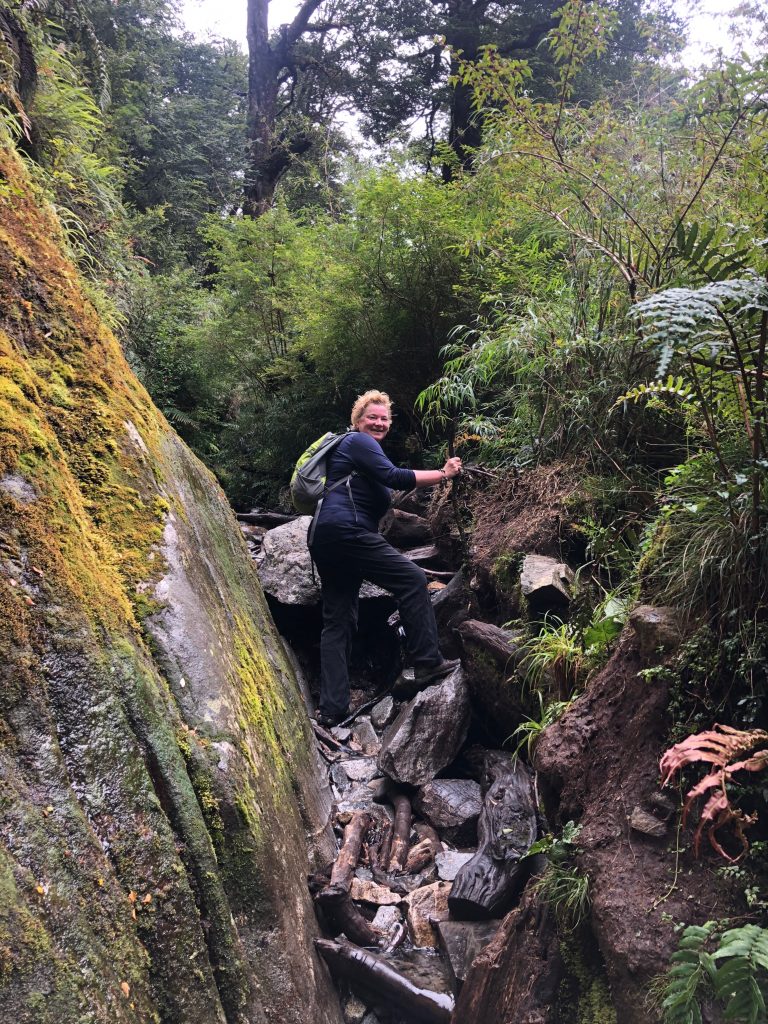 The hike up took about two hours and we were rewarded by really nice views of the hanging glacier and only a few friendly people at the tiny viewing place. 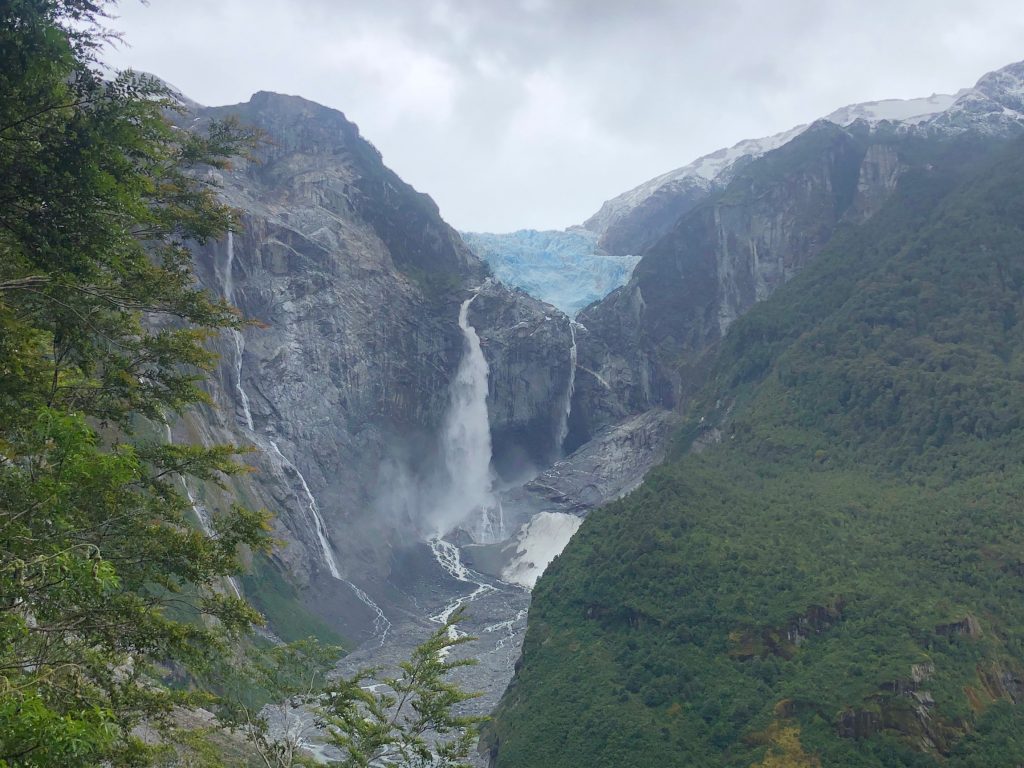 We were very pleased we had got to see the glacier and avoided both the rain and the later crowds of people that would have made the viewing area and the narrow walk in the lovely forest much less enjoyable, as it was we were mostly on our own and could enjoy the feeling of being lost in an ancient forest.

As we left the park on a normal forest road we hit a small pothole at low speed, there was a bang and suddenly the car shifted to the right and I had to correct it with a good bit of steering lock.  I stopped immediatly to investigate and it was not a good sight, the right side rear wheel was not in the correct place!, it had shifted an inch or so backwards causing the rear wheel steer I had felt in the steering.  The big tie rod that holds the rear axel in place had broken just where it joins the axel and the whole side of the axel was floating free on the coil springs – a really big problem. 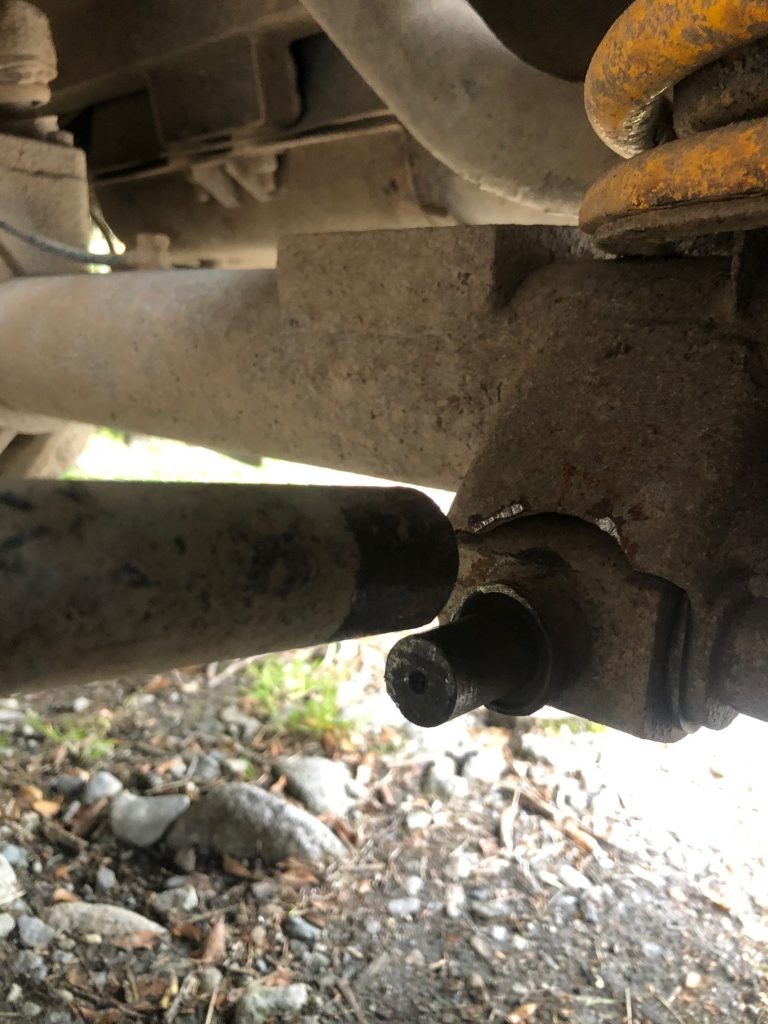 The immediate delimma we faced was that the park was totally outside telephone and data coverage, so even if we had the number of a recovery service we would not be able to call them.  The wardens were nice but informed us that there was only one garage in the nearby (20km) town of Puyuhupui and no recovery service so we were advised to try to “limp” to town, after some hesitation I decided to do that as the central fixing, the anti roll bar and the other tie rod were all still holding on to the axel so it would not likely fall off.

It was a challenging experience, we limped along the road, hazards on at about 15km/hr, this worked fine until we hit the rough unpaved section which had steepish uphill and corresponding downhill with potholes.  In these circumstances the rear axel would twist one way on the way up the hill and the opposite way as I tried to gently slow down on the way down the hill, requiring a correcting half turn of the steering one way and the other way as I crested each of the hills.  It took about an hour and a half to make it to the one garage in the town.  The mechanic was very nice, agreeing that it was serious and that the broken rod would need to be welded back in place, but informing me that he did not have a welder himself but another guy called Carlos had a welder and we should go to see him.

So off we wobbled to start our saga of “waiting for the man” as Carlos was not at his place, basically a domestic house with a big shed in the back, peeking through the door I could see bits of cars and a welding machine so I was hopefull, but where was Carlos it was 1pm and no sign, neighbours did not know (although a few dogs were dodged to find out that information) so we decided to have lunch and return, then dinner and return, then breakfast and return….

So in the end, after waiting for a day and asking around the village we did find out that Carlos was working away that week and his friend Oskar was dubious about working the welder so with the assistance of the lovely English speaking Pernilla, at the tourist information centre, we managed to contact a “Gruas” or recovery operator in distant Coyhaique 250km away and we were assured that he would be there in 5 hours (once she had worked out how we could wire him a deposit from the local supermarket).

Transport safely secured to distant Coyhaique ( or so we thought) and the promise of a competent welder to solve our problem we were able to enjoy a lazy lunch of lake fish and potter around with plans and photographs.  Nelson was parked up outside the tourist information office so we spent about half the time talking to other travellers swapping tips and stories so it was an enjoyable relaxed afternoon. 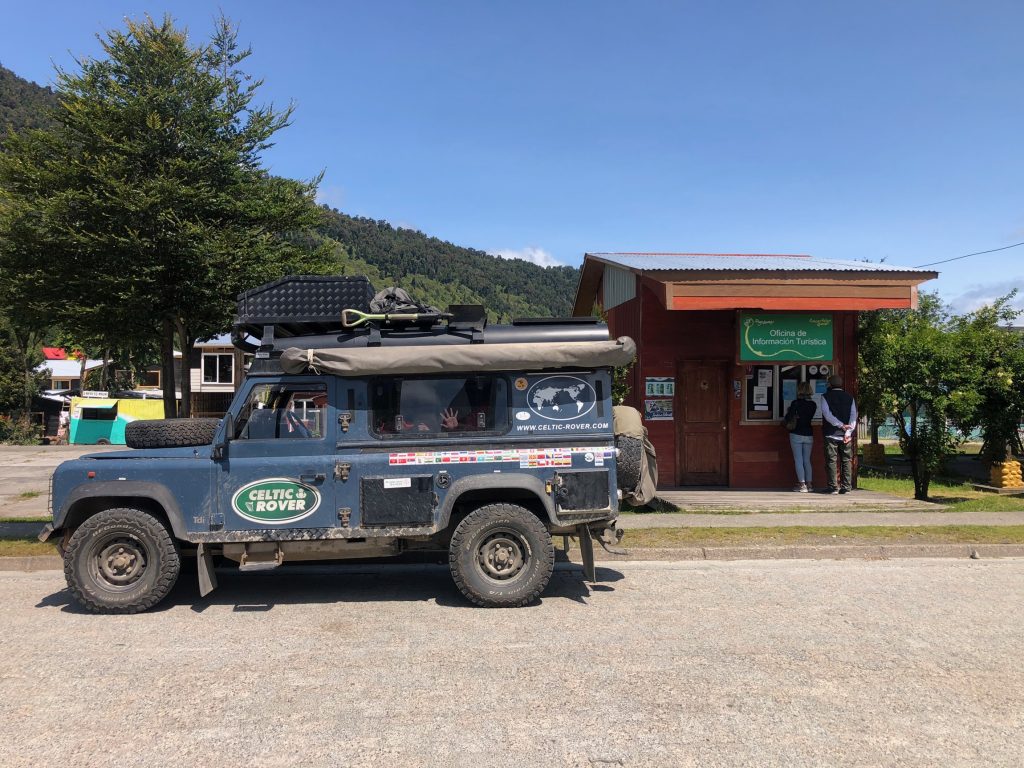 Unfortunately the recovery truck itself was involved in an accident with a cyclist on the 5 hour trip down to pick us up, as is customary in this country the driver was held by the police until the cause of the accident could be determined (apparently not his fault) and statements etc were taken, as we were waiting the sun set over the lake and the night was almost still 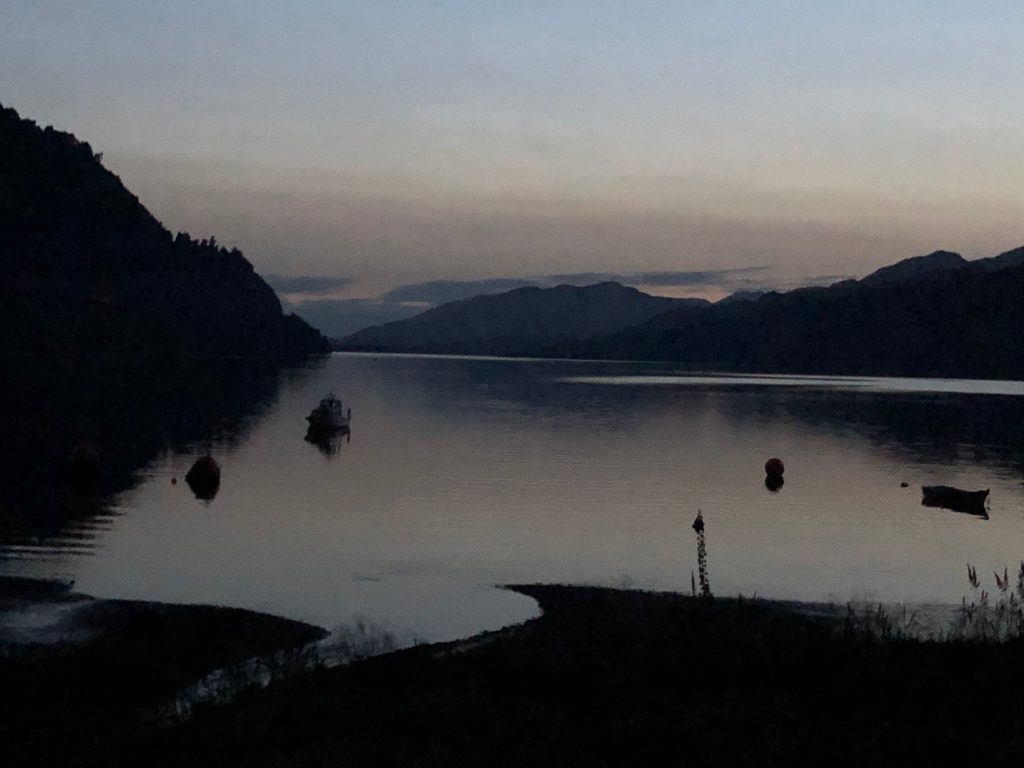 Our recovery to 4am the following morning, a little uncivilised but the driver was an hour away when he had the accident and it was a four hour trip home so he preferred to come and get us. Here we are discussing how to get Nelson on to the truck without leaving his back axel behind on the ground at 4am 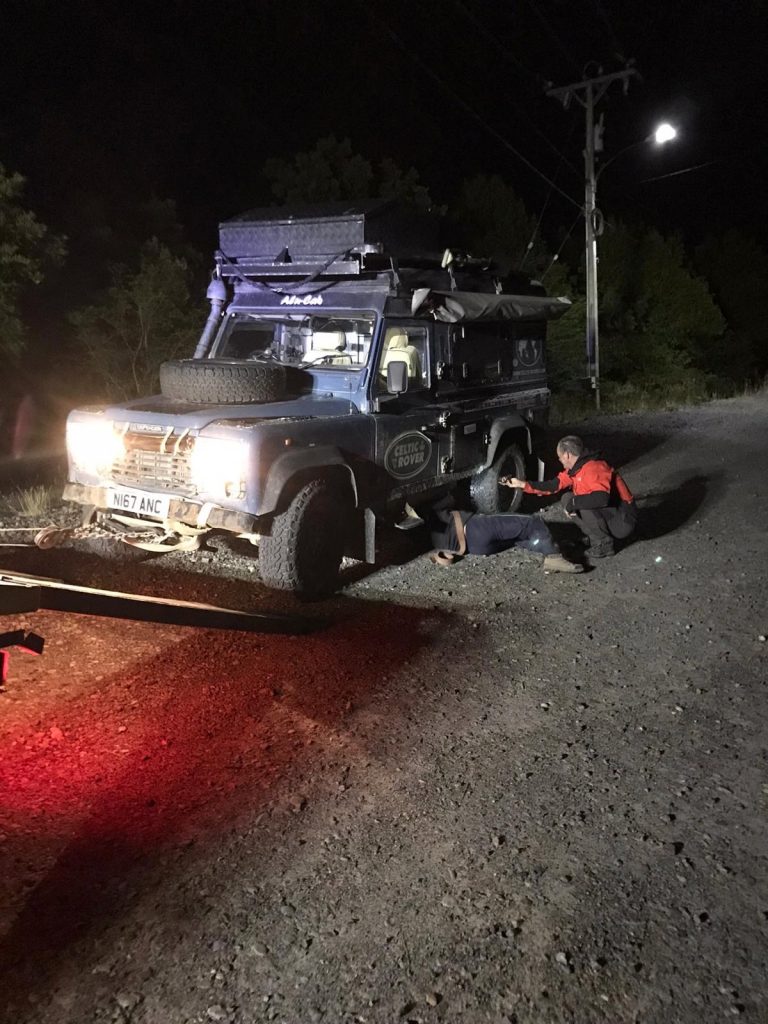 There was only one seat in with the driver and Lee was nervous about driving on the rough roads in darkness so she opted to sit with the driver while I was bounced around on the back of the lorry as he negoiated rough hairpins and rutted roads for part of the road, every movement is exaggerated by the combination of the truck and Nelsons suspension so I had to brace myself in the back as I tried to sleep a bit, eventually dawn broke and I sat up front to see the mountains pass in the morning light, now how I expected to travel five hours of this lovely road. 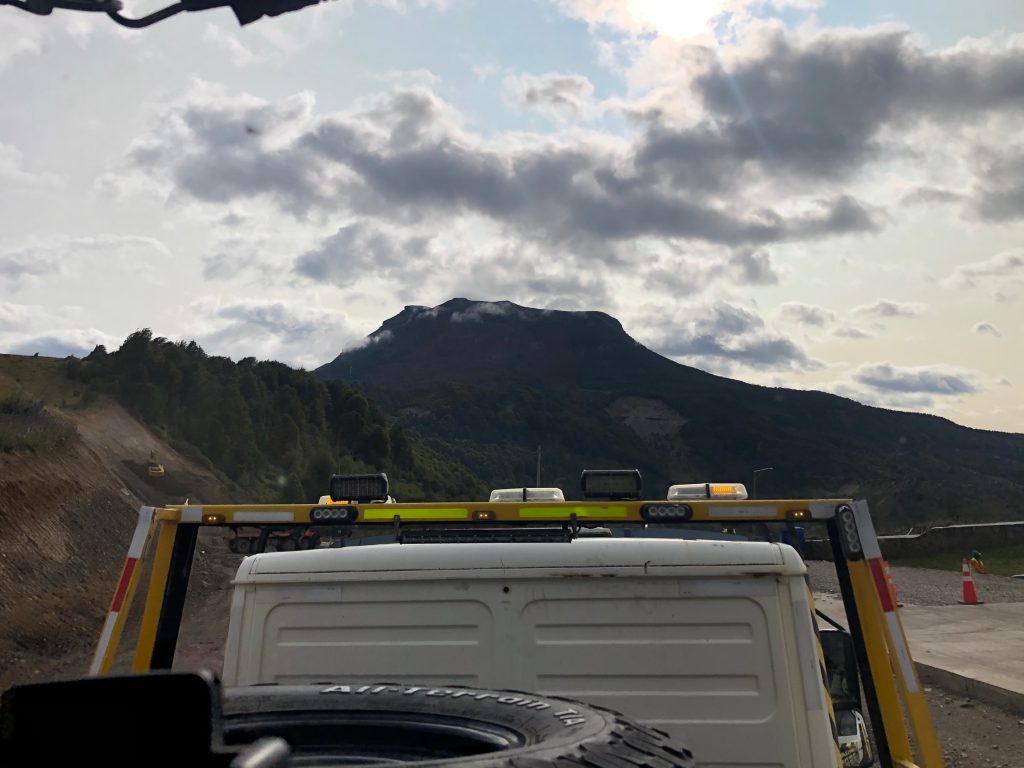 Finally we made it to Coyhaique, we got money and coffee while the welder worked on our broken tie rod, true to his word it was attached within the hour, apparently it would be strong as he had done the work in three layers so I hope it holds up under the strain – I have ordered a spare to come with Tony my next passenger in a few weeks 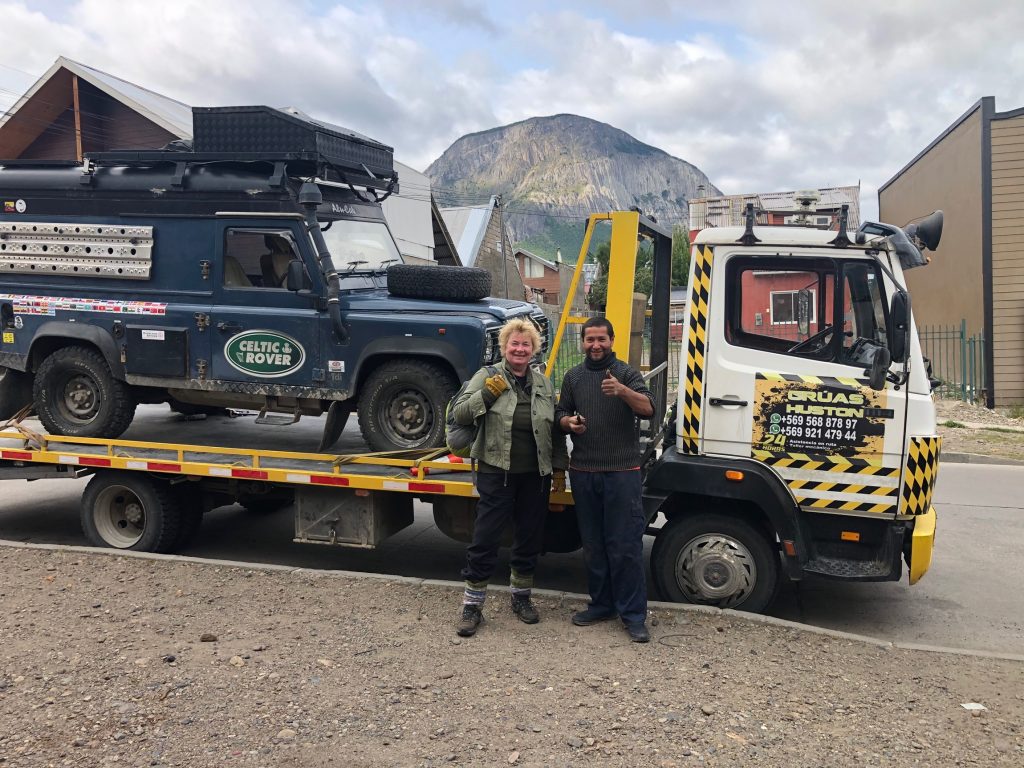 So we end the day in a lovely campground just south of Coyhaique, we got here about 11am so we were able to do laundry, showers, maintenence checks and some time on photos and bolgs, I have a backlog of half written blogs to sort out but will go ahead and publish this one meantime as I wrote it while the memory was fresh in my mind 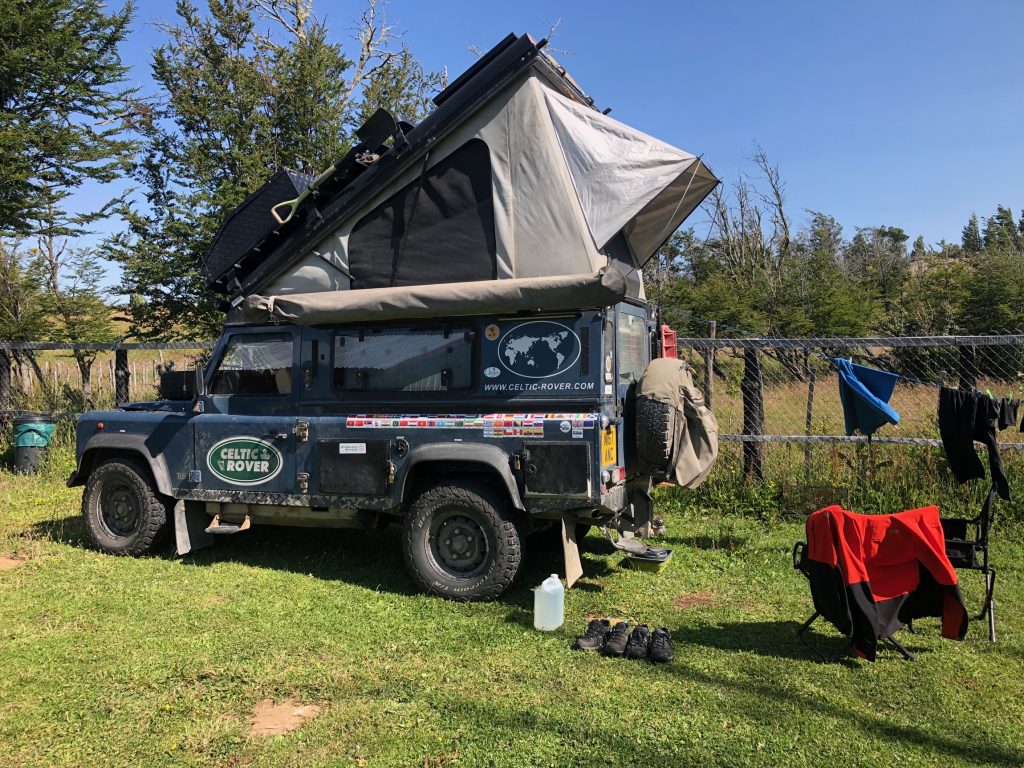 Previous From thermal Andes highs to beach chill
Next Rasta rod, Fitzroy and a mega glacier