Now that Nelson is back on the road we are very carefully working our way down to two of the big “sights” of the trip, Fitzroy mountain near Chalten and then the great glacier Moreno near Calafate.  This involves making our way down route 40 which has tow hazards in this stretch, the first is a long stretch of 100km of road which is mostly paved but has massive axel breaking, 2 feet deep, potholes with no notice.  So we were both on high alert during that stretch as our rear axel is held on by a crude weld, lee enquired about the function and the proper name of the broken bit and then decided that it was too complicated and shortened it from “rear axel stabilising tie rod” to rasta and hummed “dont worry be happy” to keep it strong as we hit each bump.  Thankfully it worked a treat and we made it down pothole road and a long stretch of rough ripo with the back axel still straight and firmly attached to the truck. 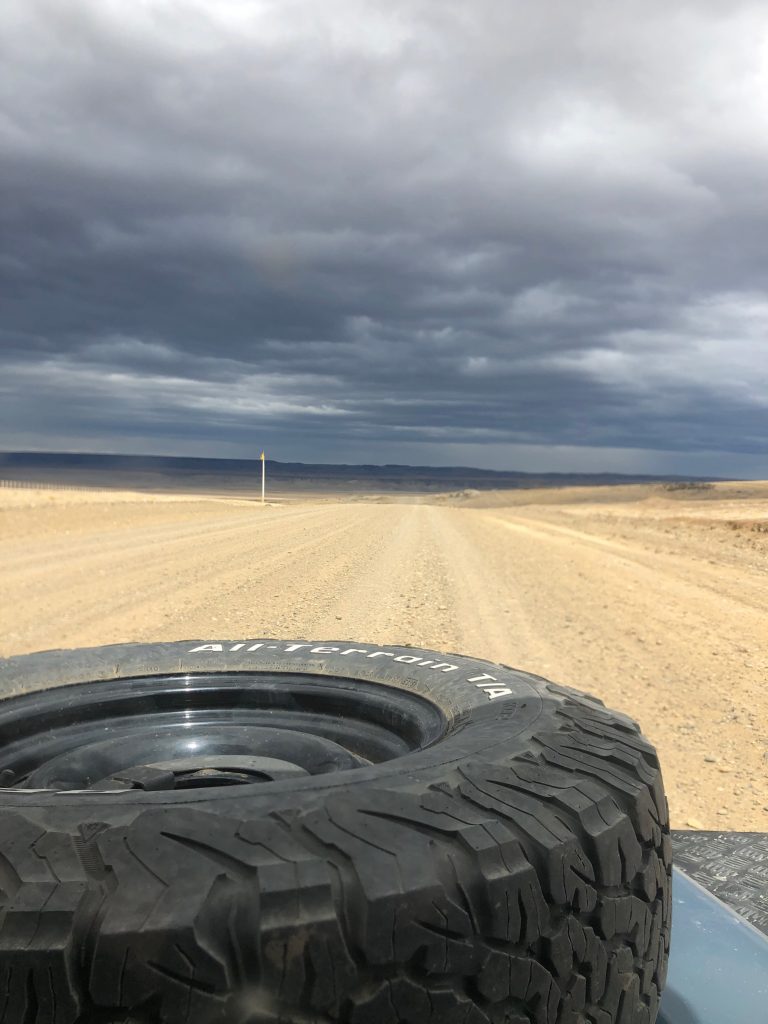 Which was just as well as we were travelling through some lovely scenery on the way to Fitzroy mountain but the sky was looking ominous with dark clouds gathering over the mountains a sharp contrast to the blue skys we had become used to in the day before.  We had started on the side of the Lago Argentina where the views were lovely 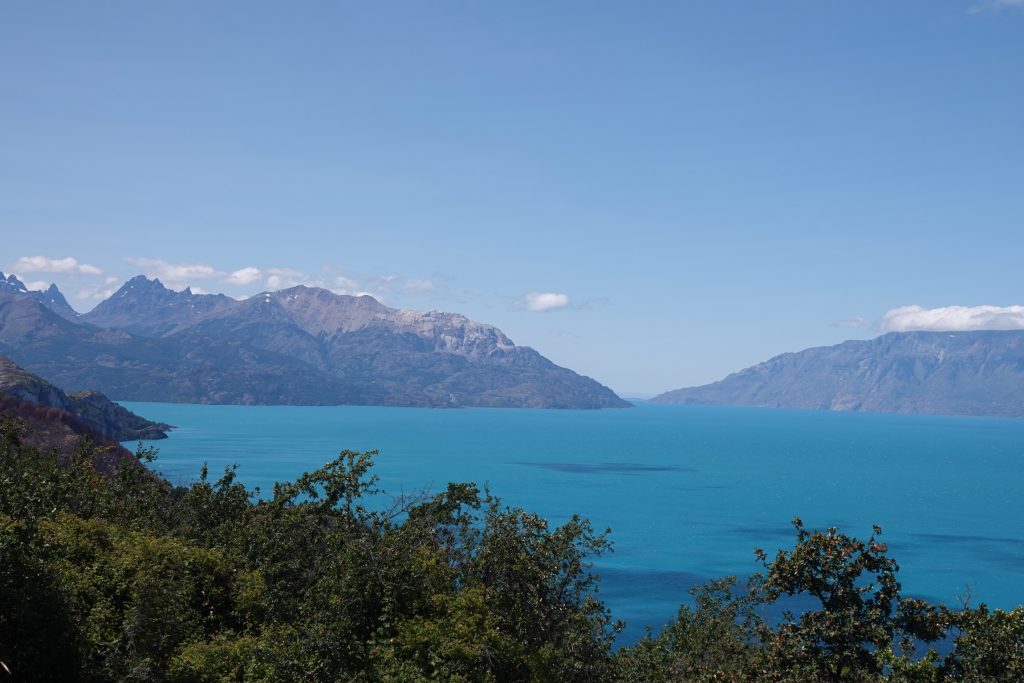 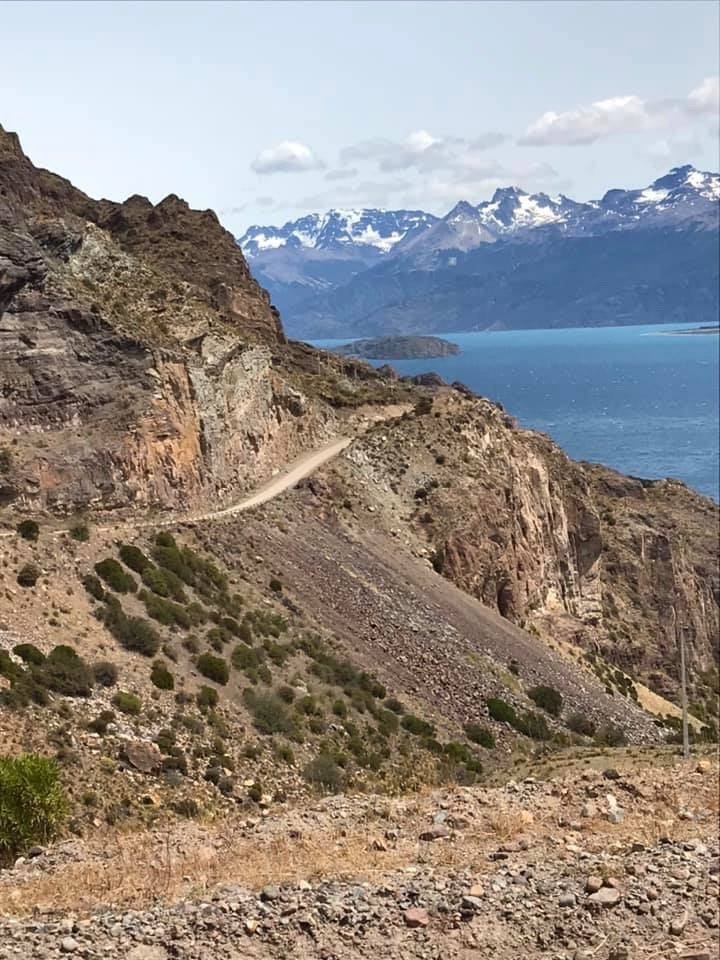 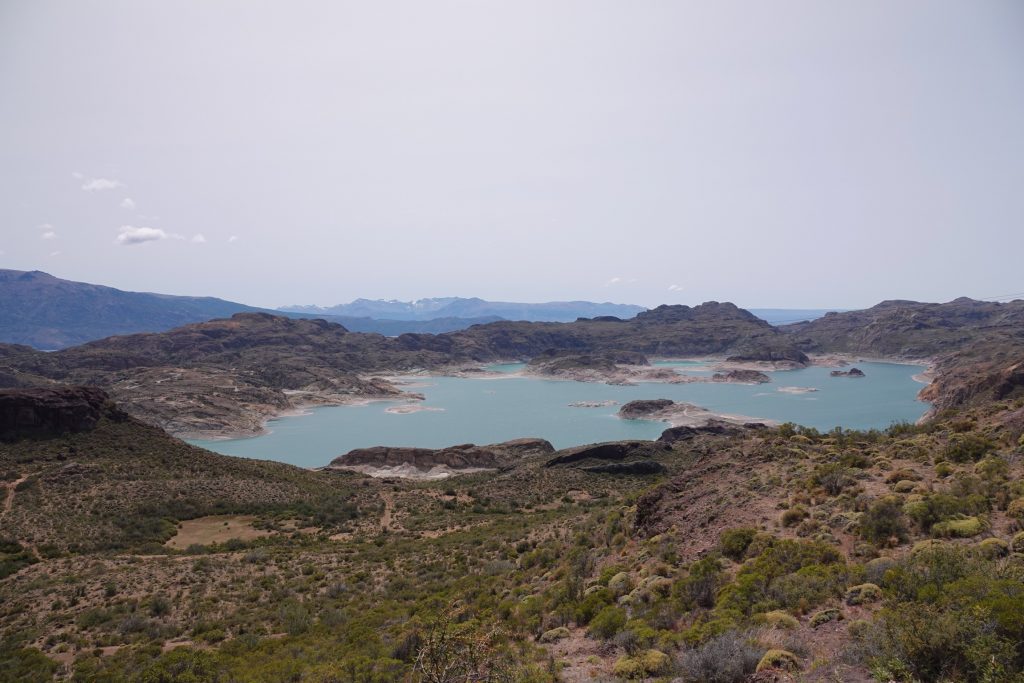 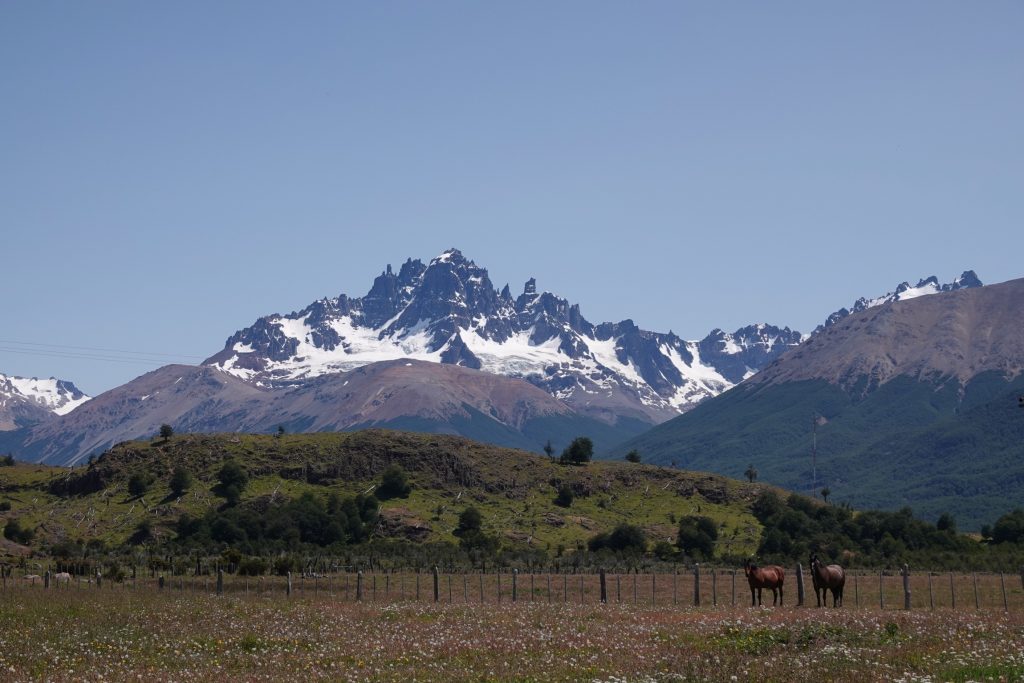 In this area the lakes were very blue, I guess due to the minerals in the water from the action of the glaciers that feed them 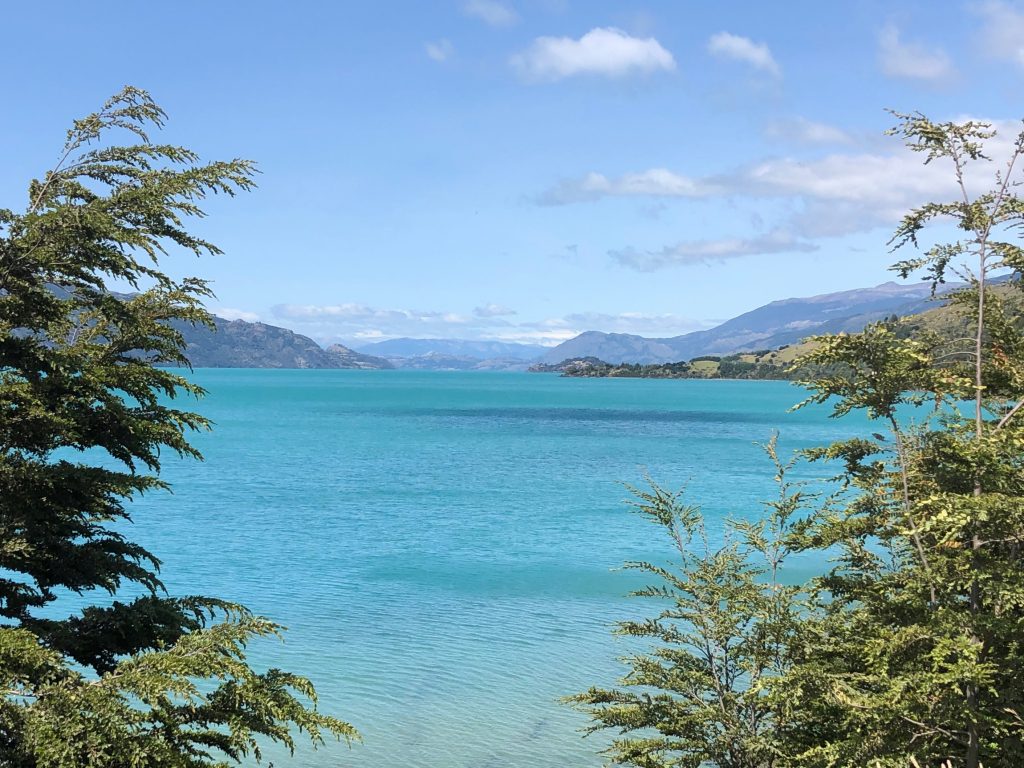 By the time we made it to Chalten, the gateway to Fitzroy mountain, it was tipping it down comprehensively and windy to boot this did not bode well for our chances to see the mountain so we had a pizza and opted for an early bed as we were told the weather was usually best in the mornings due to the local climate being driven by the heat of the desert interacting with the cold of the glaciers.  In the morning it was still pouring with rain and we glumly looked out on rainswept grayness from our morning coffee and eggs.  In good Scottish style we pressed on and were rewarded with clearing sky as the rain stopped, lee for the first time using her new sticks to help a problematic knee. 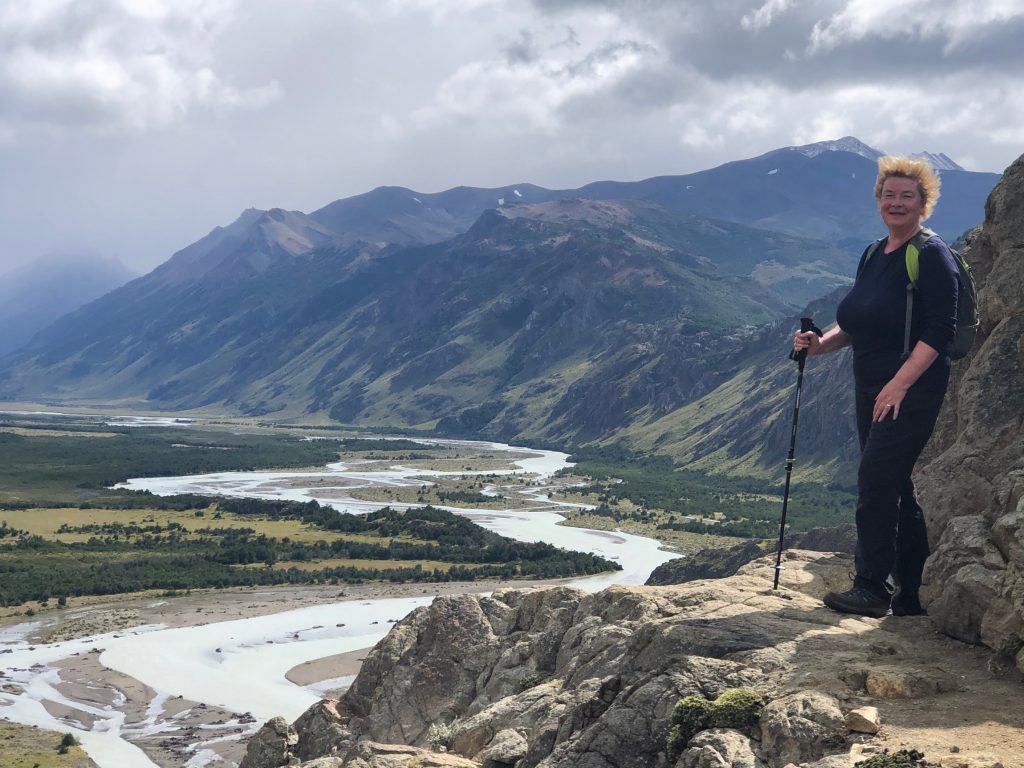 After a two hour hike we were rewarded with a fleeting glimpse for about 15min of the Fitzroy massive, it was a bit clearer to the eye than the camera image reflects and it was one of the most impressive mountain views I have ever seen. 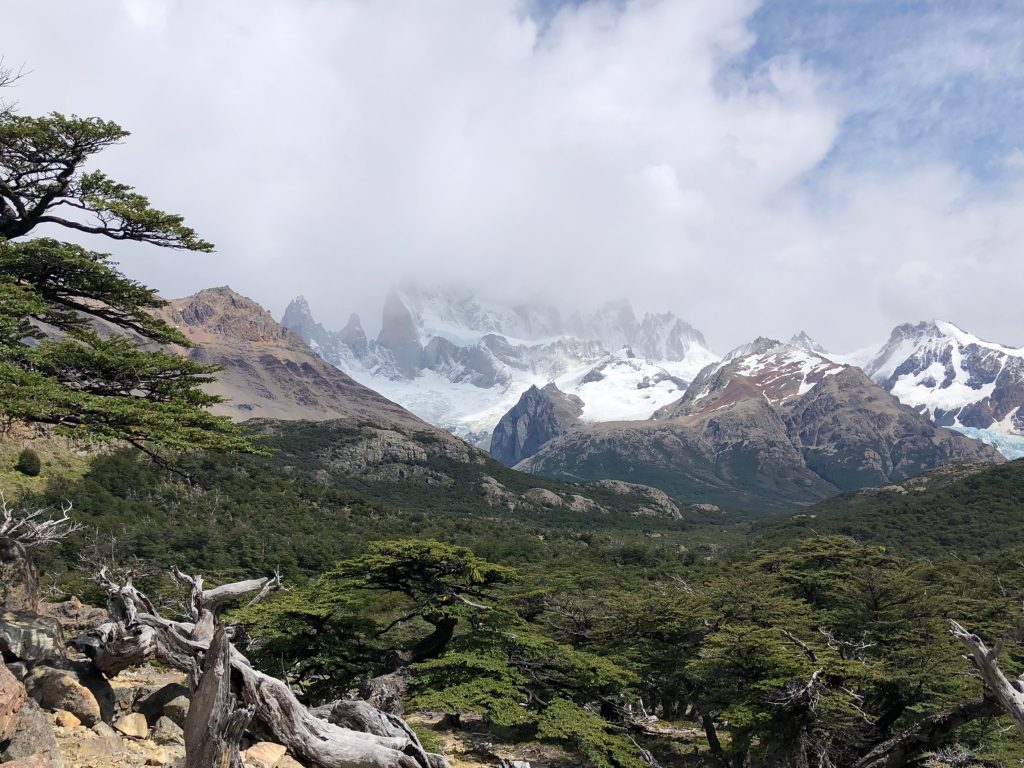 So our timing and our patience were well rewarded as 15min later there was no view at all and the rain had restarted, by the time we were coming down the trail we were feeling sorry for the folks going the other way as they were walking into a bleak rainstorm with no prospect of a view at all.

Returning to the village it was now lunch time and the rain was on heavily and for keeps, the local town water was turned off so no chance of a shower or decent coffee so we cut and ran back to the desert, within an hours driving we were back with blue skys and 25C a real contract to the weather in the mountains.  We kept going to Calafate which is the gateway to our next ‘big sight’ the Morneo glacier and enjoyed nice hot showers (best so far in a heated bathroom) and some good local “disco’ a dish of slow cooked lamb and potatoes.

The next day after a quick oil change for Nelson we set off to the glacier, like the Bolivian salt flats this did not disappoint, the natural outcrop of rock allows really close view of the 70m wall of ice as it calves into the lake right in front of the crowds, they have built a big network of walkways and viewpoints so although there are probably thousands of people there in any one day it does not feel crowded and everyone can stand and stare for as long as they want without being in anyone elses way. 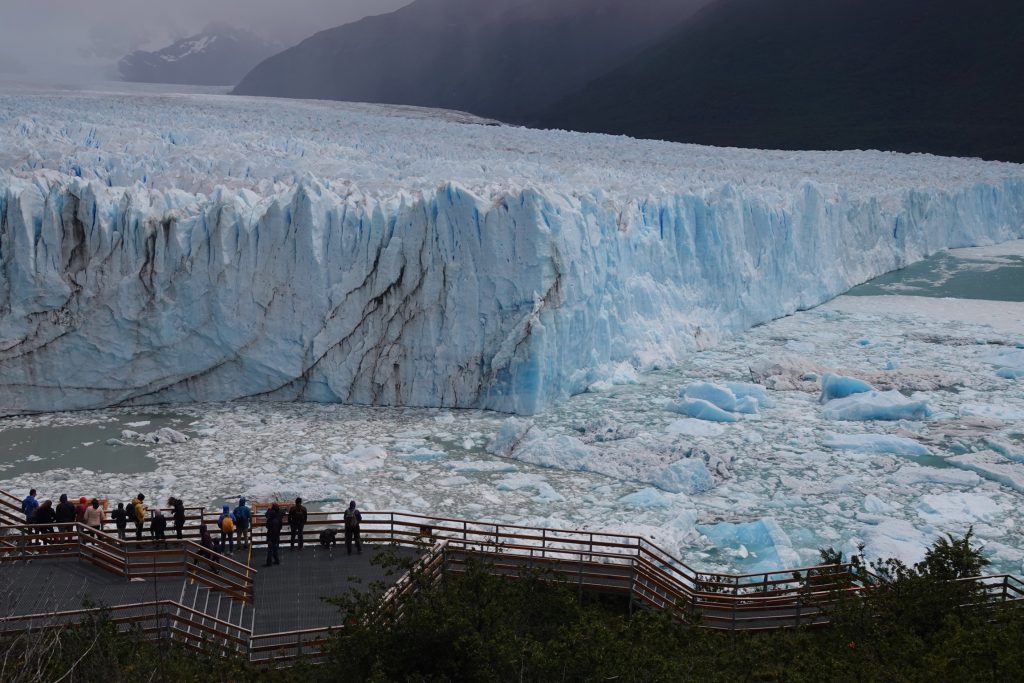 In this picture the people give some idea of the scale of the glacier even though they are close to the camera and the glacier is some 200m further away, you really feel safe as there can be big tidal waves from the claving, but the walkways are about level with the top of the glacier and it is solid rock beneath, even the boats that take people out to the glacier face cannot get as close as the walkways because of the risk of waves. 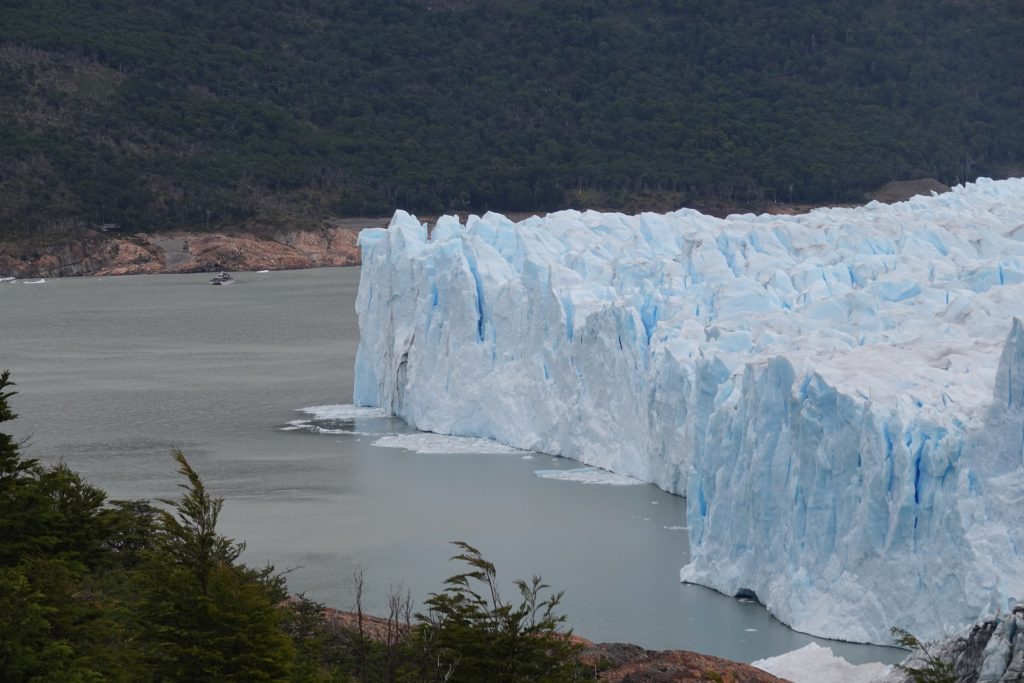 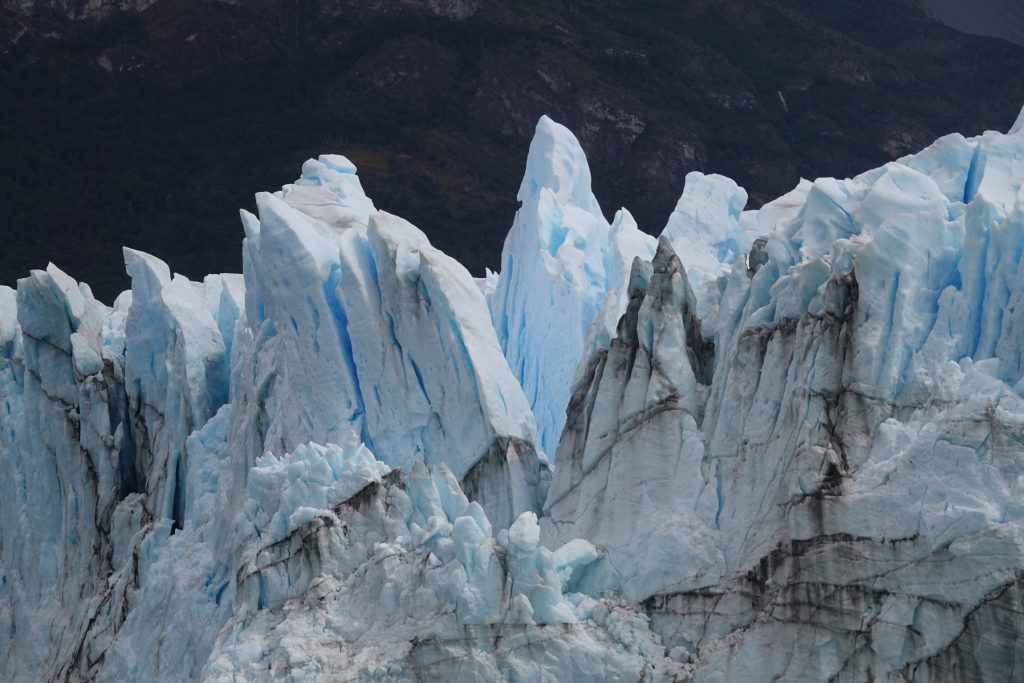 We went to the glacier exhibition which is on the way back and saw a great film, in winter the glacier advances to the rock we were standing on and blocks the flow of one lake to the other which creates the narrow channel you see here, in spring there can be a 10m difference in the water level and eventually the water finds a crack through the glacier and breaks down the connection in a mad rush of calving and water, it is a spectacular and annual sight here making this location a UNESCO preserved natural location.

So a grand few days of contrast once again, rain and desert in a day, glaciers and soaring peaks South America continues to entertain !

Previous Glaciers waterfalls and wobbly axels
Next Torres, just had to be done, and it was good