Torres, just had to be done, and it was good

The last big sight on Lee’s part of the South American tour was supposed to be the mighty Torres del Paine mountains before we headed down to the island of Tierra del Fuego and Ushuaia where lee would fly home and Tony will join me for the final leg of the trip to Carnival, Brazil and the sunny north.

To get to TdP we first had to drive down from Calafate and then cross the border into Chile, choosing the smooth route so that Lee’s so far successful technique of singing reggae to keep our welded axel tie rod attached was not overly strained by potholes, there were still quite a few (known as batches here) so we had to be on pothole alert and protect the left rear wheel from hitting any by team effort.  Like eskimos have a lot of different words for snow we developed our vocabulary to indicate location and severity of any spied pot hole, in the minimum time, once we determined “watch out” from lee and “watch out what, crunch” from me was not efficient.

We made it to the border after a long drive where of course we had to clean out our vegatables, meat, and honey so first order of business was to head to the little town of Puerto Natales for a supermarket, pizza and nice warm shower in the plum tree camping, there we found we were one of three Defenders parked up.  One contained a German family with three kids and a small caravan, the other a nice Belgian couple who were stuck due to a problem with air in their cooling system causing overheating.  they had the same engine as me so I know it well and this created a dilemma for me, the corrective action plan they had for the problem was to change the water pump, which they had waited for for 10 days and had just arrived.  My feeling which I shared with Lee as we drove up to the park was that this would not solve the problem and it was more likely to be either the cylinder head gasket or the small air/water separator pipe.  So I was friendly but not too assertive as I did not want to interfere too much and said I had some spares if the water pump did not do the trick and they were needed and shared contact information.

So Lee and I set off the next day to the National Park, it was windy with intermittent rain and clouds but we pressed on as Lee only had a few days before we had to leave for Ushuaia for her to catch her plane home.  As you can see in the picture below the conditions were not promising as we approached the mountain. 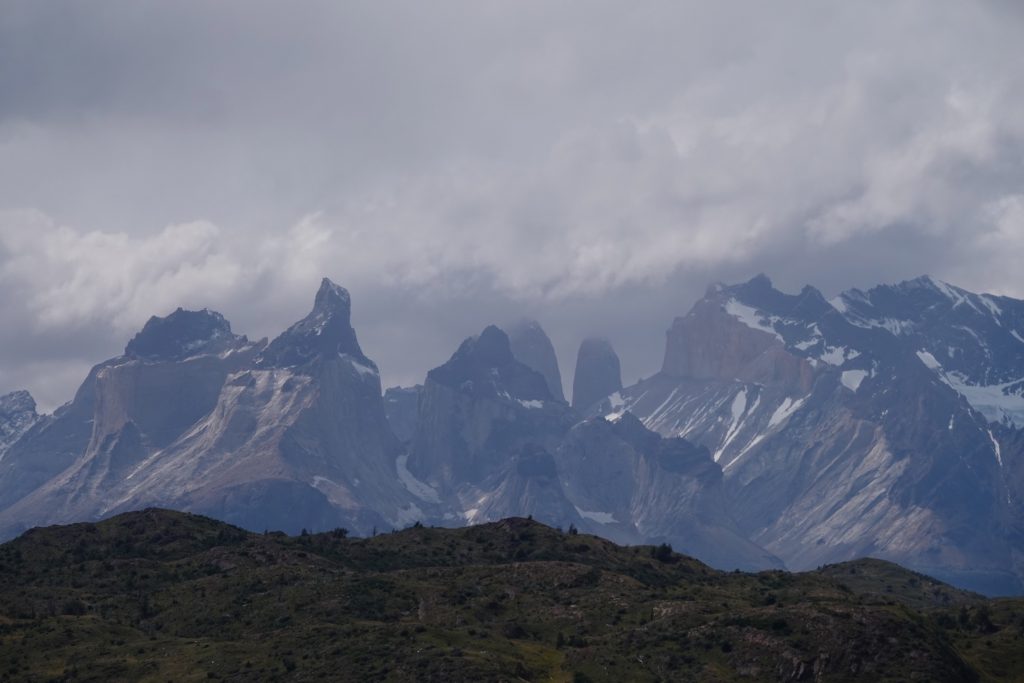 Our first stop in the park was Lago Grey and its associated glacier but the howling wind and occasional rain made the view of a distant glacier, specially after a day at the Moreno glacier up close, not specially inspiring – so we did the British thing and made a comforting cup of tea rather than take the boat trip! 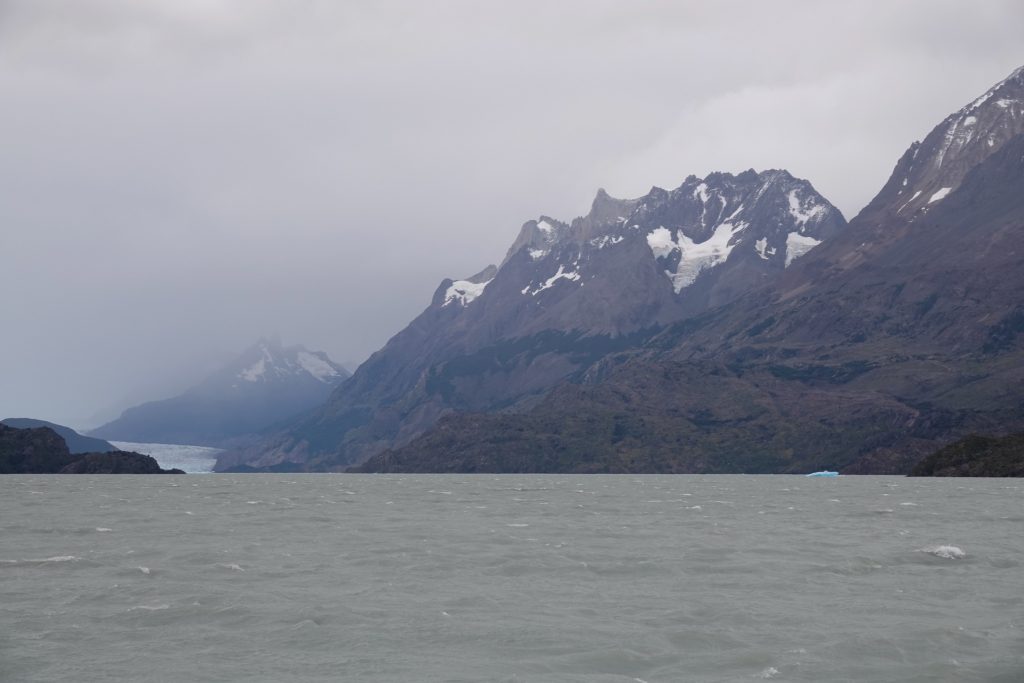 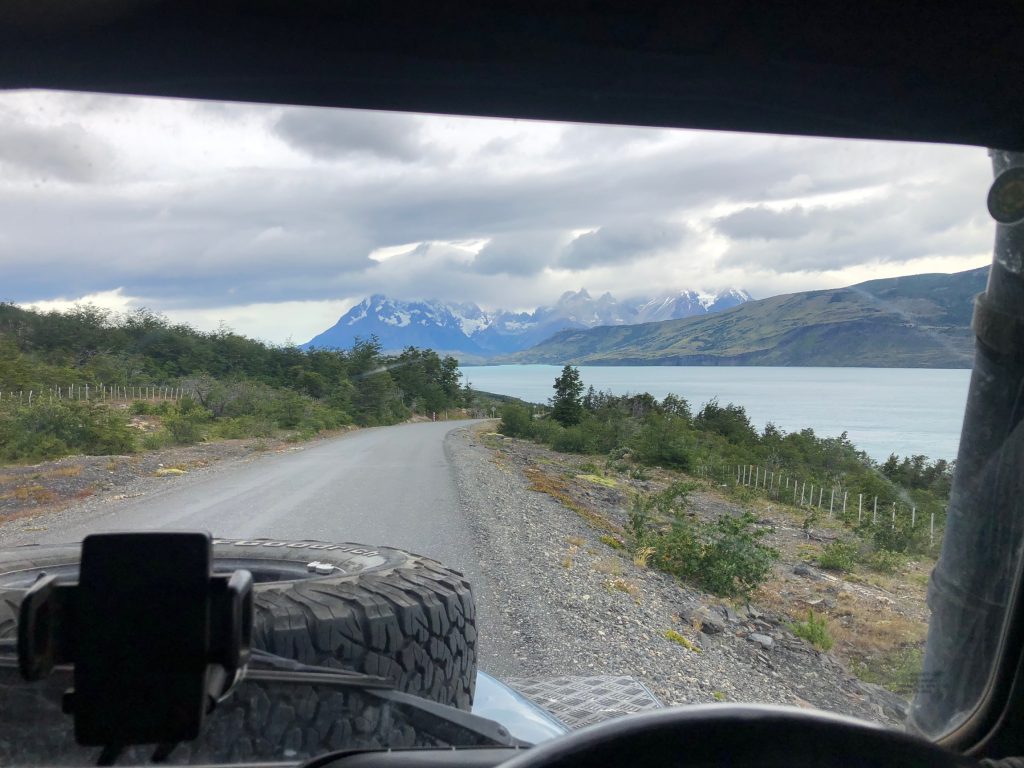 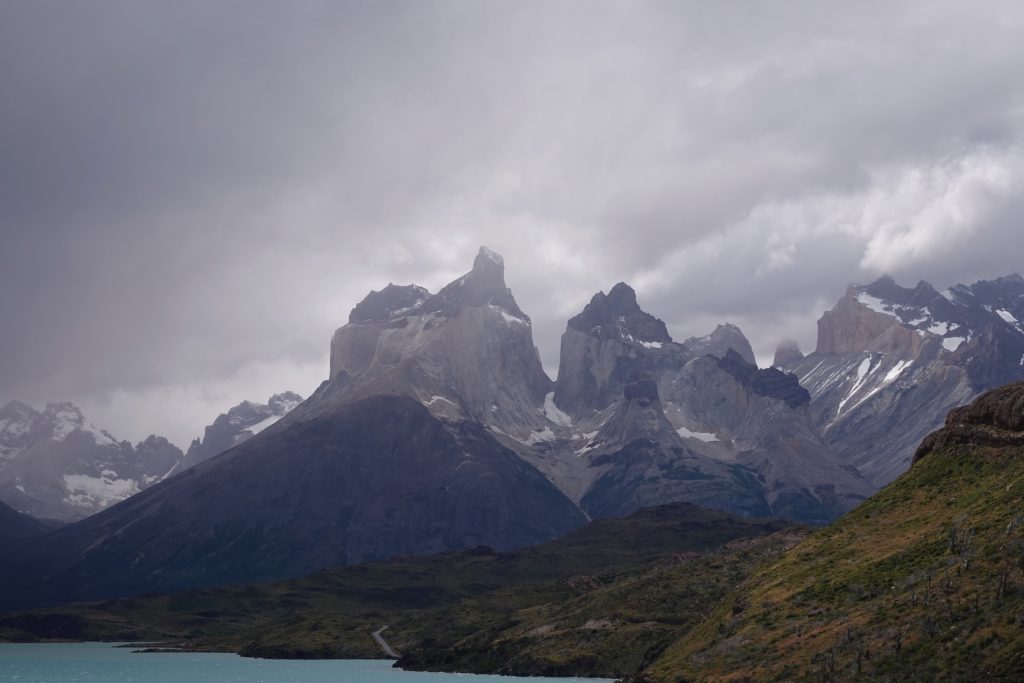 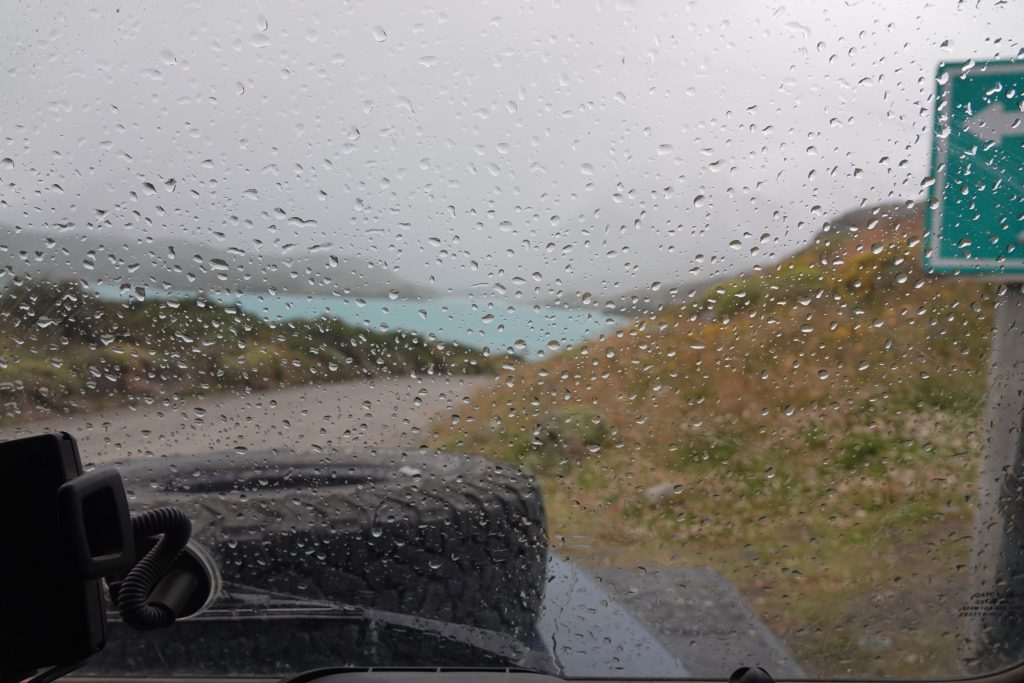 Fortunately we had been given good advice by Carlos the owner of the yellow plum tree camping spot in Puerto Natales, he said as long as it is windy then things will change quickly so just go for it, and so we did.  The next morning our 6am went off and we scoffed our porridge and coffee donned our rucksac (or at least I did) and headed off into the wind to the base of the Torres trek, as you can see from the hairstyle on lee the wind was pretty fierce and a few times on the unprotected gravel tracks we had to hunker down to let a strong gust pass.  Lee was using her newly aquired carbon fiber walking sticks, after long scoffing at the people out with sticks she actually needs one now and really appreciates the support it gives on the downhills, how the haughty have fallen ! 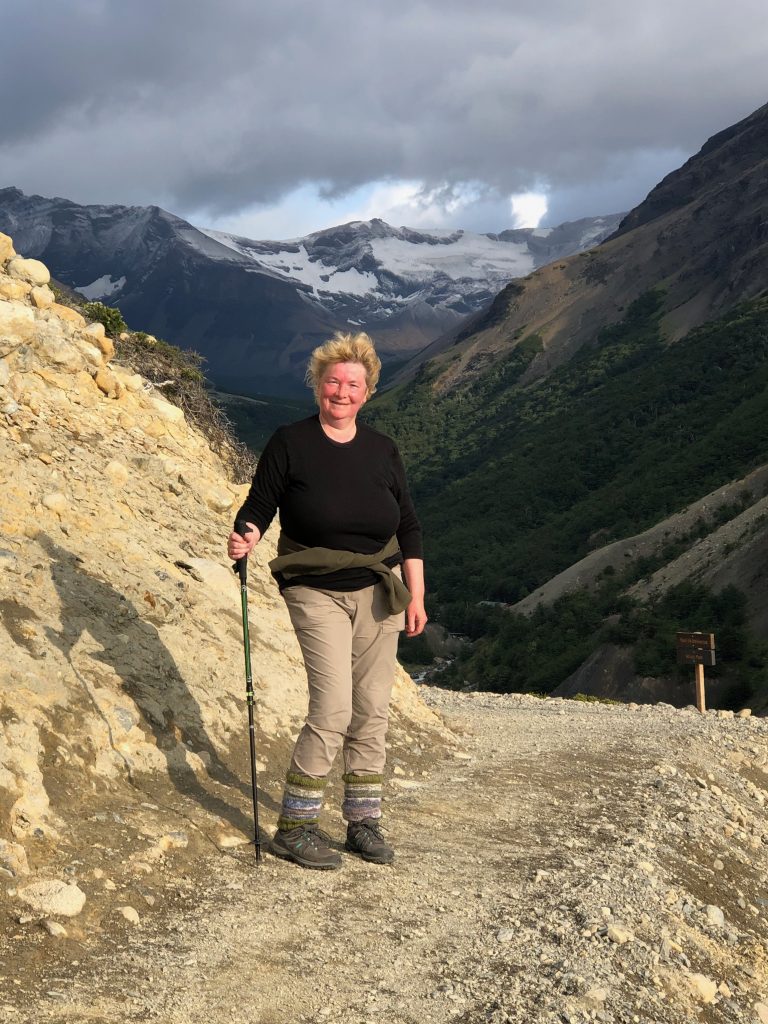 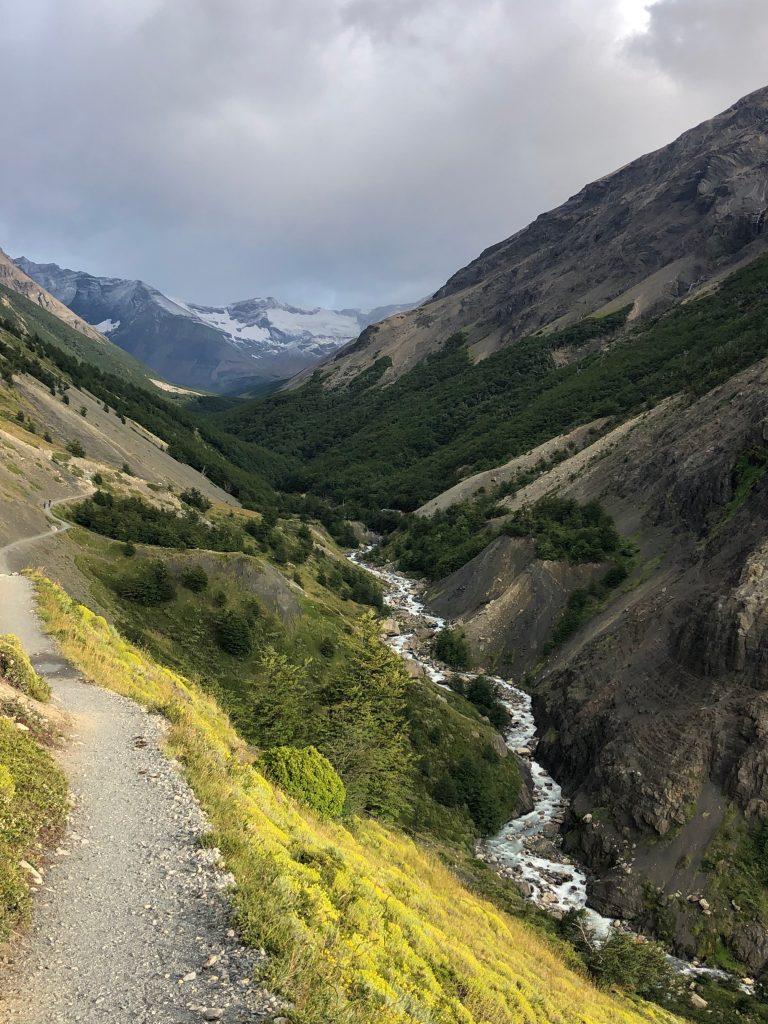 The sides are steep and there is not much protection when one of the regular gusts comes down the valley so a few times we ended up nearly sitting down to avoid being blown off the path into the river below. 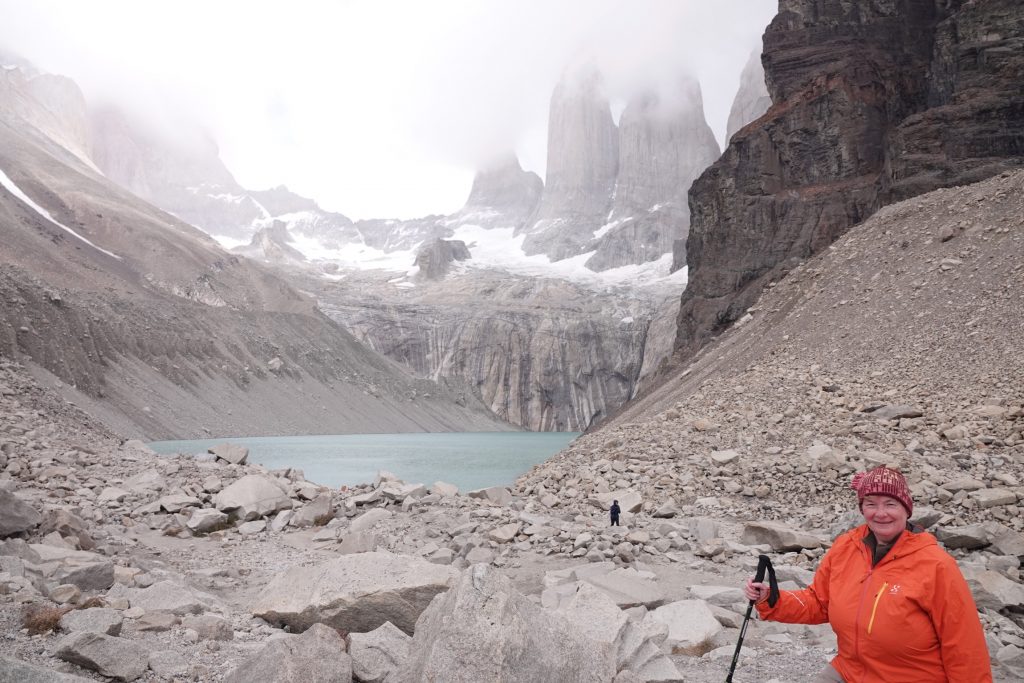 Finally we made it to our destination the lake at the base of the Torres de Paine (sounds good in Spanish but just means the towers of Paine as rio grand just means big river which was a disappointment to me). We were lucky that the clouds mostly cleared just as we got over the edge of the boulder field and the lake and the Torres came into view, so we just got the “classic” photo with only one other person in the shot, just half an hour later the faster hikers had caught us up and there were about 30 people here so our early start paid off!

Lee got a bit dubious about making it all the way up in the last very steep section up a boulder field, so her look here is a mixture of relief and enjoyment, plus a good dose of apprehension at having to go back down what she has just come up.  In the end it was a four hour ascent and a significantly longer descent as sore knees and wobbly muscles reduced our pace considerably on the steeper downhill sections. 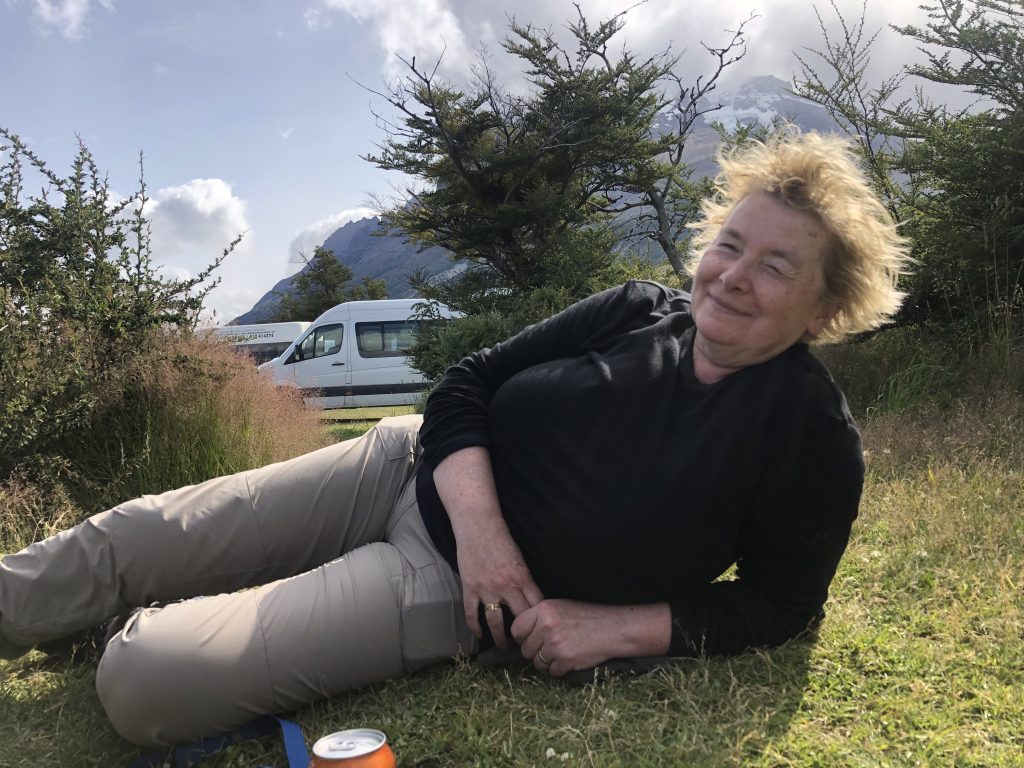 Lee demanded Fanta, beer and chocolate at the expensive kiosk as she collapsed at the back of the truck in the grass and the sunshine, a sense of achievement and pain mixed together in this picture!  The next morning we set off back to Puerto Natales to answer an SOS from our Belgian friends who had fitted their new water pump and as I feared not solved their overheating problem.  As we headed away in the morning light the clouds lifted and the whole range was visible from the road out of the park. 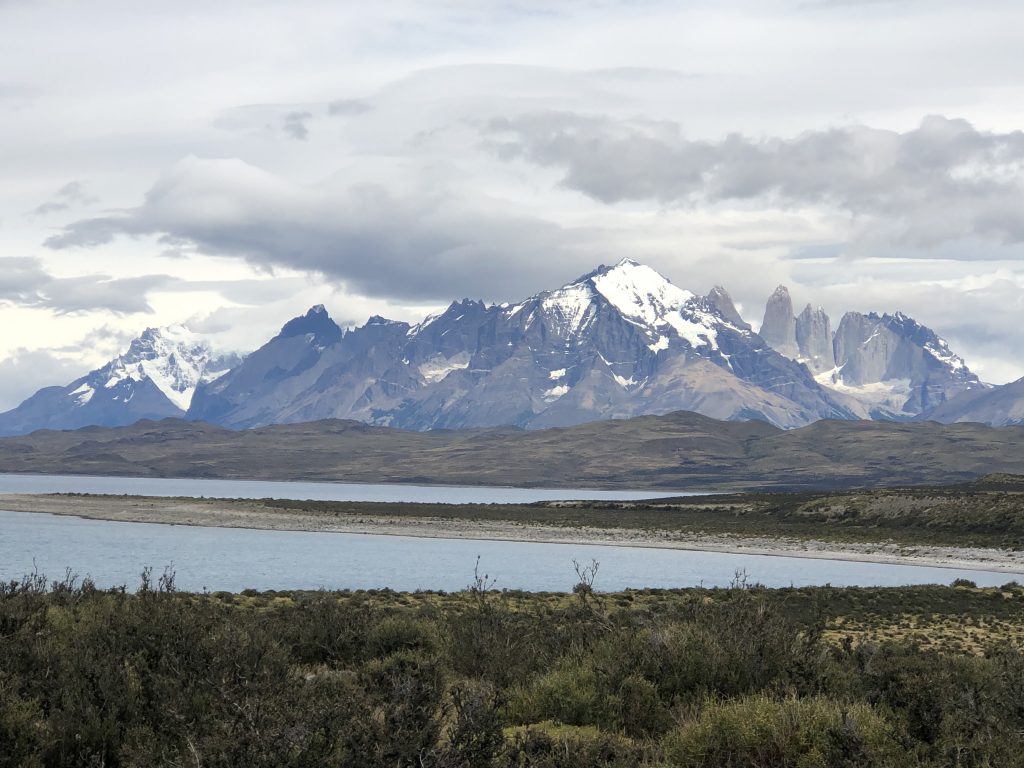 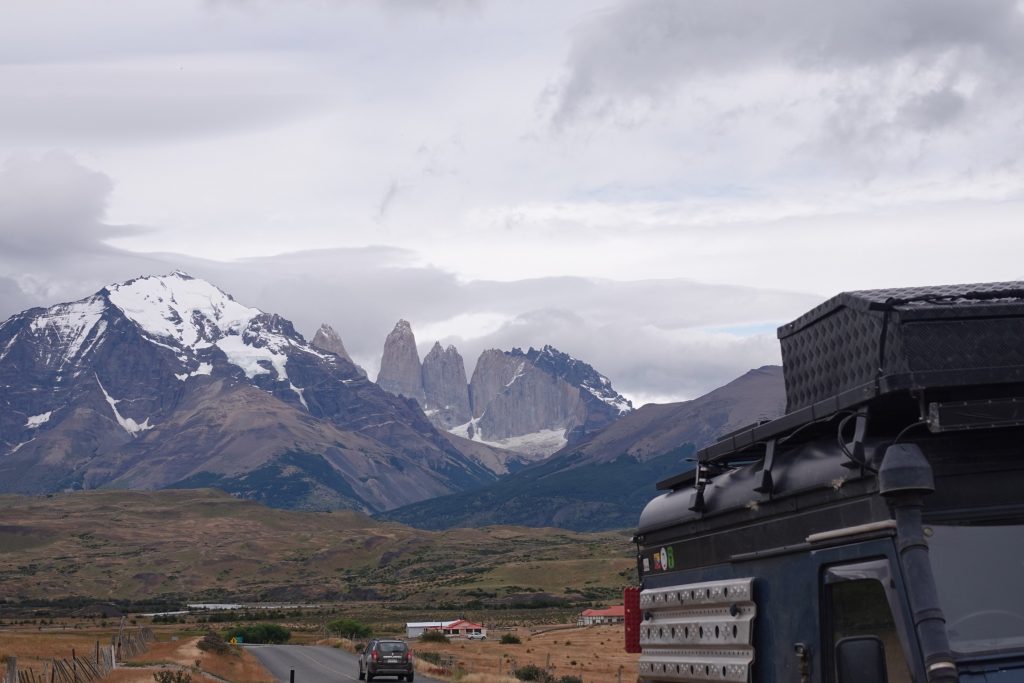 The night this picture was taken we were in Puerto Natales safely tucked between two buildings, the wind rocked us a bit and howled through the night, the next day we saw on facebook that four motorhomes had been tipped on their sides by the wind in the very car park we had been in the day before, with Nelsons high sides and relatively narrow wheelbase we are vulnerable to side winds, of course we park nose into the wind when we can but I have adopted a “belt and braces’ approach to safety in Patagonia using my trusty straps.  This has the additional benefit of reducing the rocking of the car in the wind so now I park looking for anchor points like a ship ! 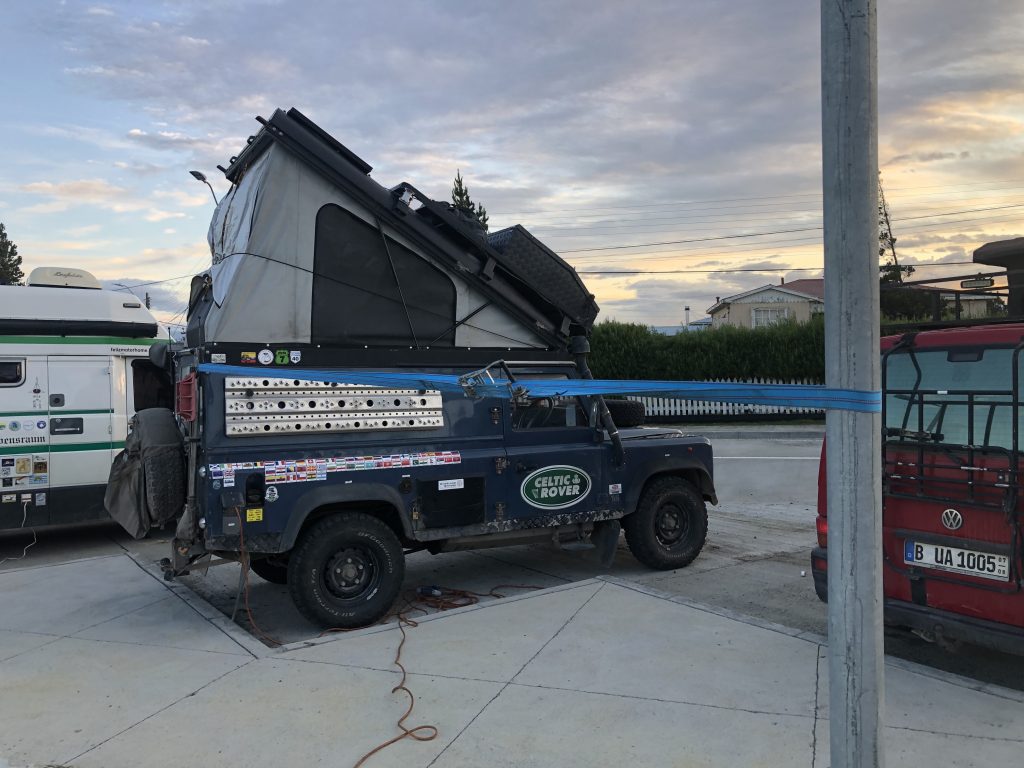 We did move the anchor point up to the roof rack later in the evening, but it worked very well and we can do it on both sides when needed, a new trick for Scottish gales !