New Year on the Road – Mendoza

For a week I dropped out of my routine, no longer was I waking to put on the kettle for coffee and get the porridge out of the fridge while I heard the rustle and thumping of Errol, Duncan and Mark in the bed a few inches above my head.  Instead I was luxuriating in the comfort of my own bed which felt a bit surreal after a few months on the road.  Getting up in my dressing gown and padding down to the kitchen to get a coffee for breakfast before a nice hot shower and perhaps an additional nap just seemed to be the lap of luxury. Even walking a block to any number of coffee shops to catch up with friends or running through the meadows and Arthurs seat overlooking Edinburgh all were experiences seen with new eyes.  I even sat and watched TV in the daytime just because I could and stayed for a chat with my local mechanic as he was doing the MOT test on my old MG so I could legally drive it during my visit home.

Sometimes travelling is a great way to rebase your value system and to realise just how much we all take for granted in our comfortable daily life, those new eyes also see how much some of the paintwork in the house needs to be sorted out and the amount of work I will need to do on the garden when I get home, that is the more unwelcome side of rebasing your surroundings.  Good news is that both the family and our dogs were pleased to see me, the dogs were quite clingy for a few days following me around the house in case I slipped off to foreign lands again when they weren’t looking!

I really like the Christmas holiday, so I had made my plan so I could get home for Christmas and travel back out to Chile with Lee for her leg of the trip which will take us from Santiago through Patagonia all the way down to Ushuaia.  I had a long list of tasks to do at home including the all important (for me) Christmas dinner which I really like to prepare for the family with the Christmas music in the background, prior to that I was able to catch up with Poppy and Holly and hear all their news (at least the bits that were deemed releasable to Dad.  With only a week at home I was not able to fit in a trip to Ireland to see my Mum which was a pity but she was in good hands with my brother and I am getting her a new “smart” phone so we can stay in touch with Whatsapp in future when I am travelling.

Christmas dinner preparations well underway in the photo above.  After Christmas we headed back to Chile where Nelson was getting some TLC in the Land Rover Garage to sort out his little oil leaks before they became big oil leaks and we got a nice view of the Andes as we approached Santiago. 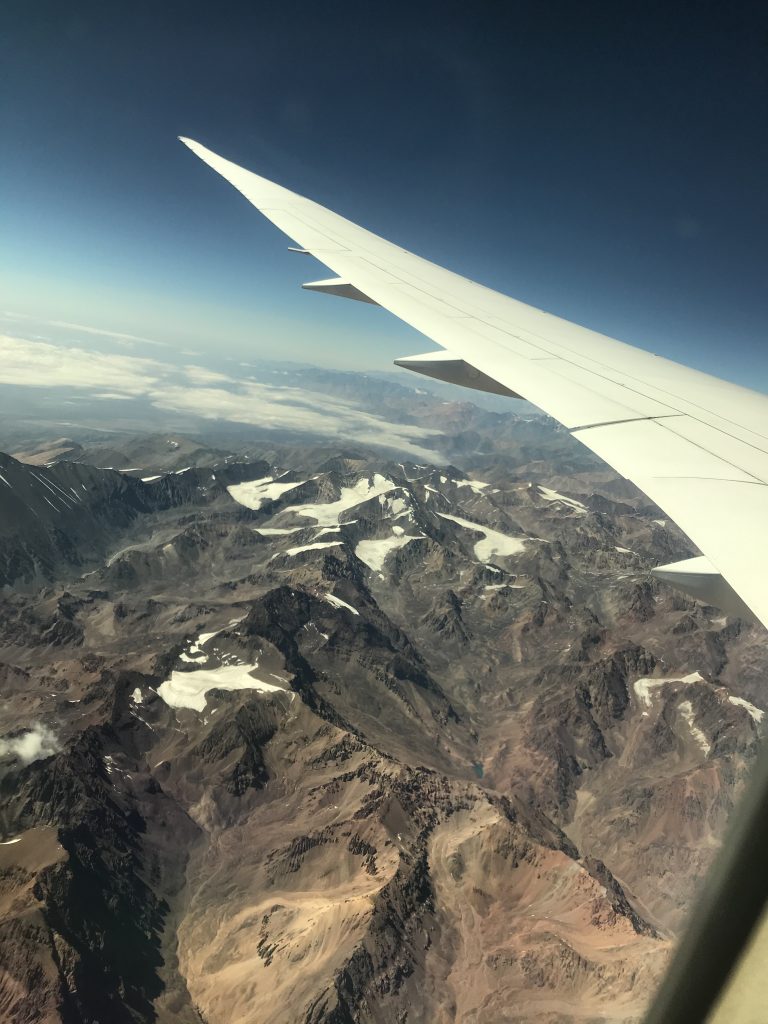 When we got to Santiago I had planned to pick up Nelson and take him to the hotel so we could work on cleaning him up and provisioning up for the next part of the trip.  Unfortunatly despite me asking in my best Spanish if the garage would be open on the 28th so I could pick up the car it was closed and the guard cheerfully told us that it would not be open until Monday.  Less of a disaster than it could have been as we had a hotel booked and we were not planning to leave until Monday anyway but I was modestly grumpy while waiting for the Uber to take us from the garage to the hotel with all our bags. 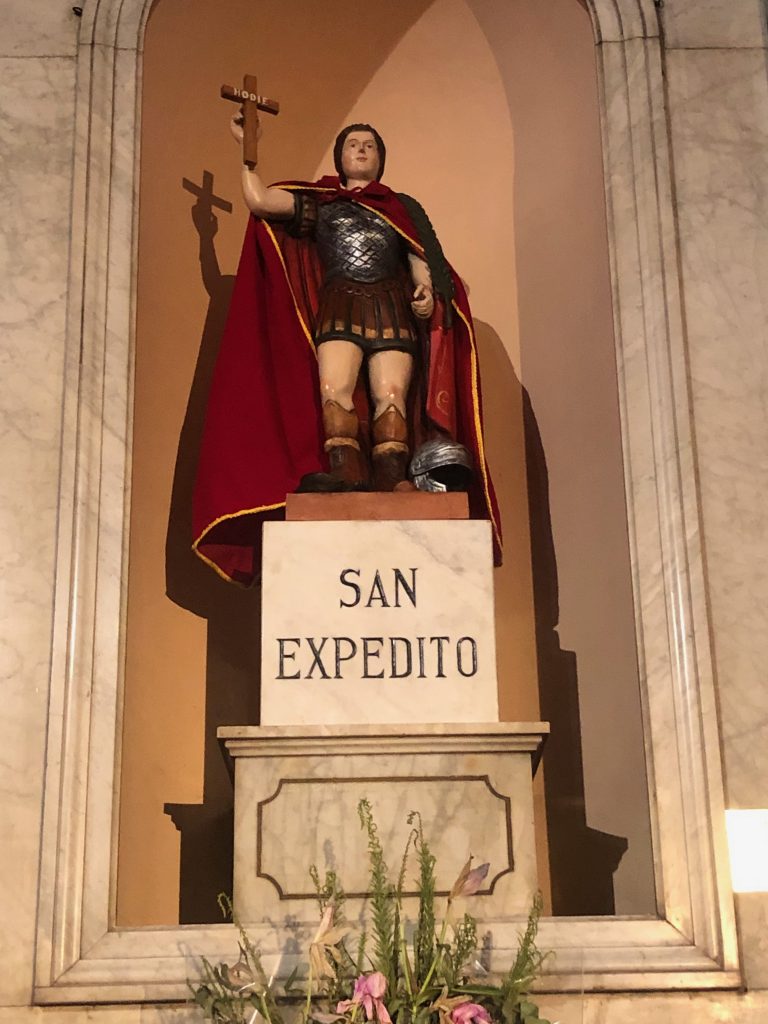 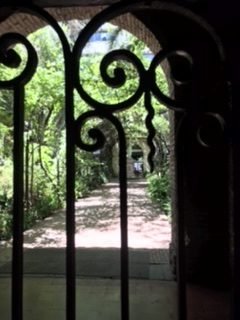 Santiago is a nice city, impressively modern and well organised with a good selection of restaurants and sights to keep the visitor occupied, its an easy first few days after the fatigue of a 24 hour long haul flight in economy.  Good beds and a skyline view for breakfast occasionally are appropriate on these trips! 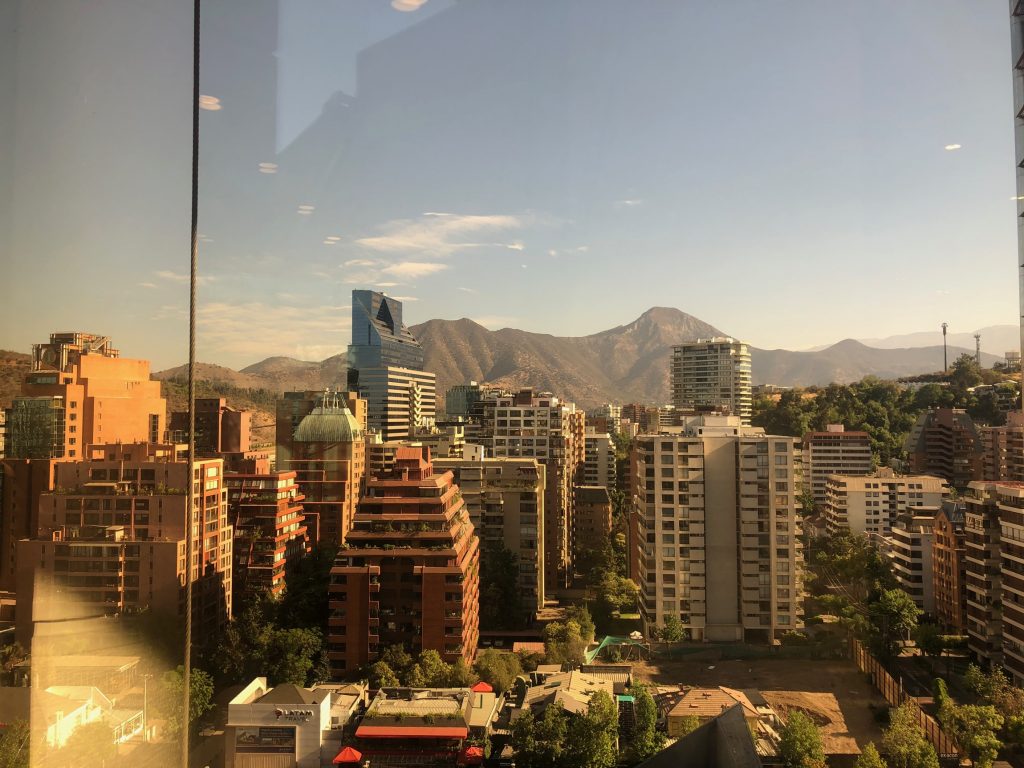 So after a day and a half in Santiago we managed to recover Nelson and throw our bags in the back, the nice service manager was all smiles and kisses and did not mention the fact that we had turned up two days before looking for our car back ! 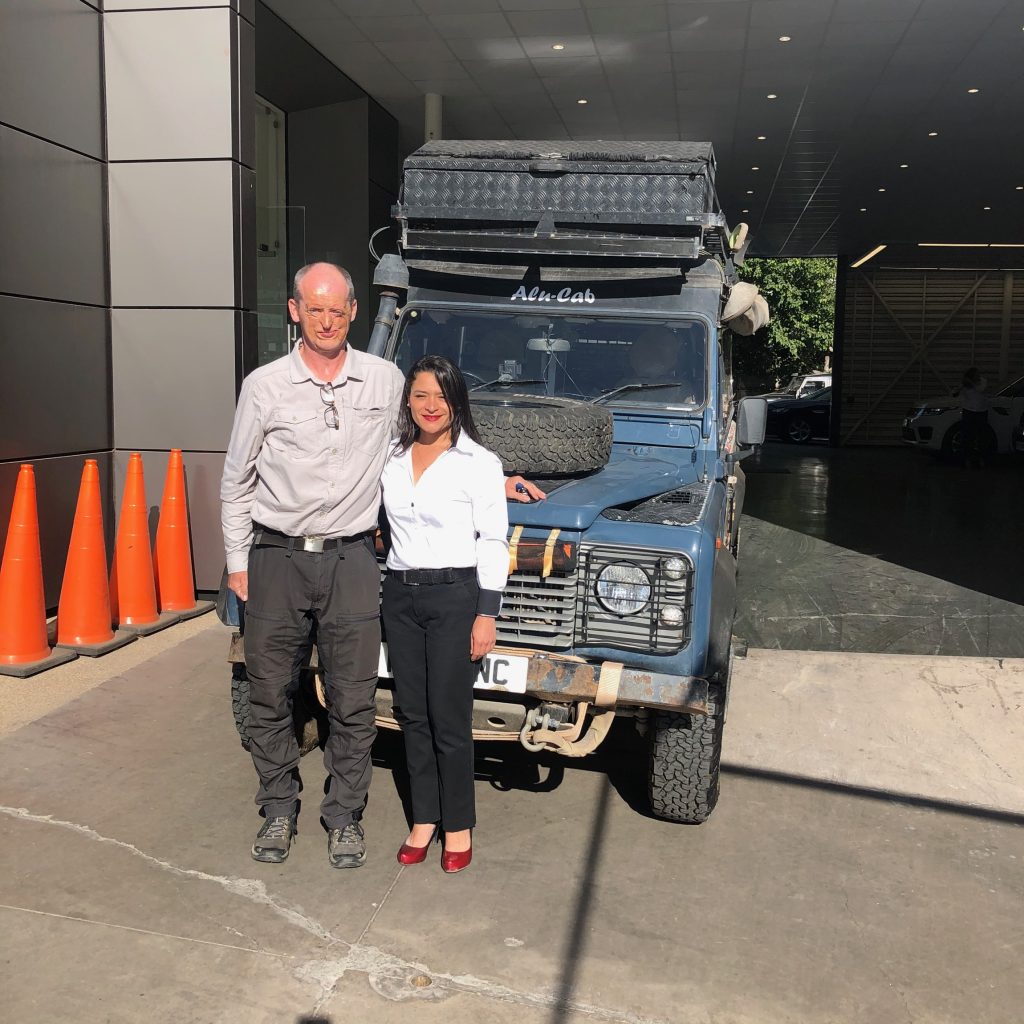 Lees first drive in Nelson on this trip was a reasonably big one, to get across to Mendoza we had to cross right over the Andes passing the highest mountain in that range, although the scenery was quite good the road was an easy drive apart from the bit where we had to wait around as a big artic had rolled on one of the downhill corners, thankfully the driver was all right and the truck had not landed on any traffic coming the other way. 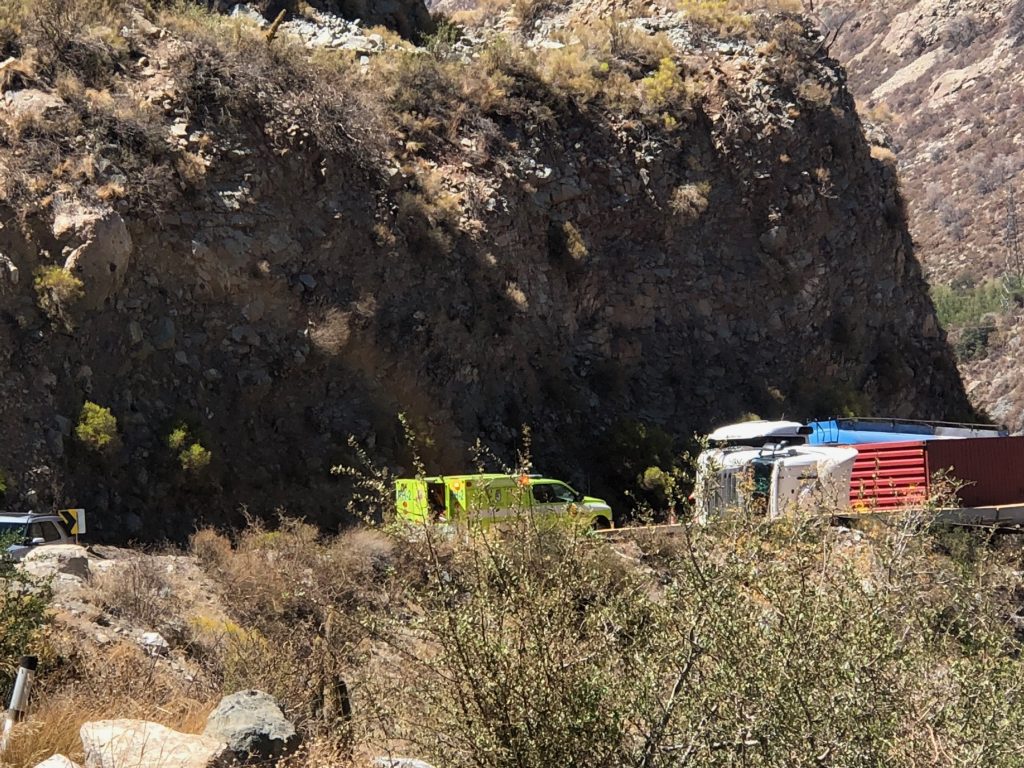 It was a reminder that road accidents are the biggest risk of this trip, and sometimes you can do nothing wrong yourself but just be in the wrong place at the wrong time. 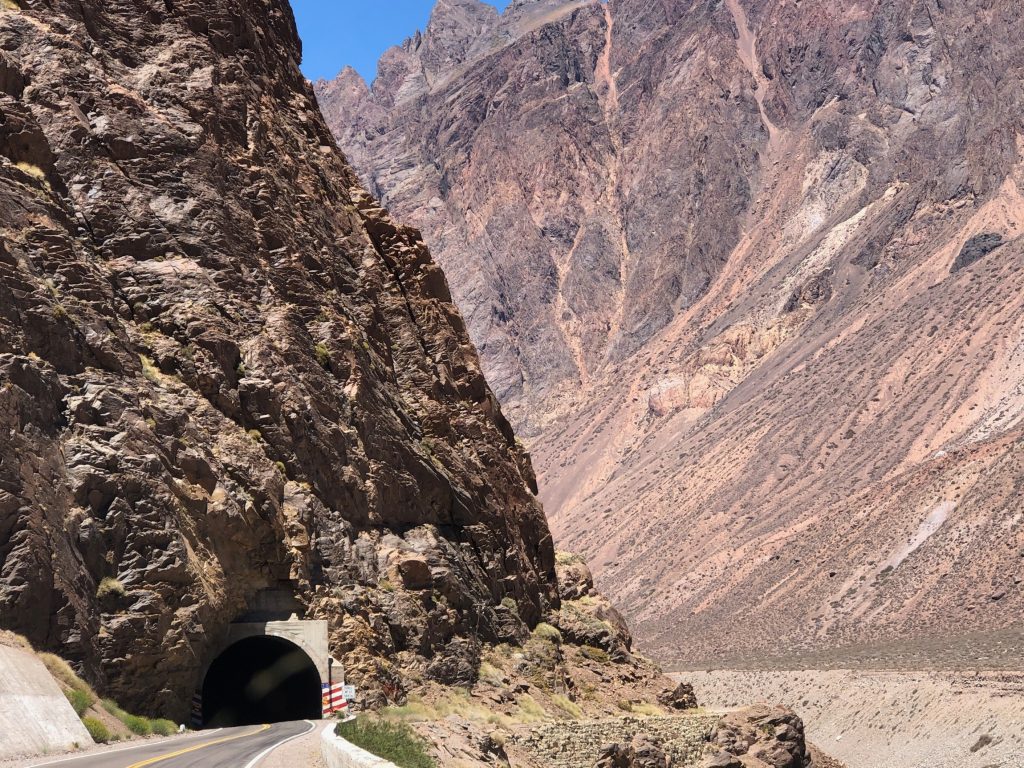 Most of the time it was just nice scenic driving with the occasional tunnel as you can see above.  Eventually we crossed the border to Argentina and were able to camp up for our first night on the banks of a river about an hour short of Mendoza were we would spend new year 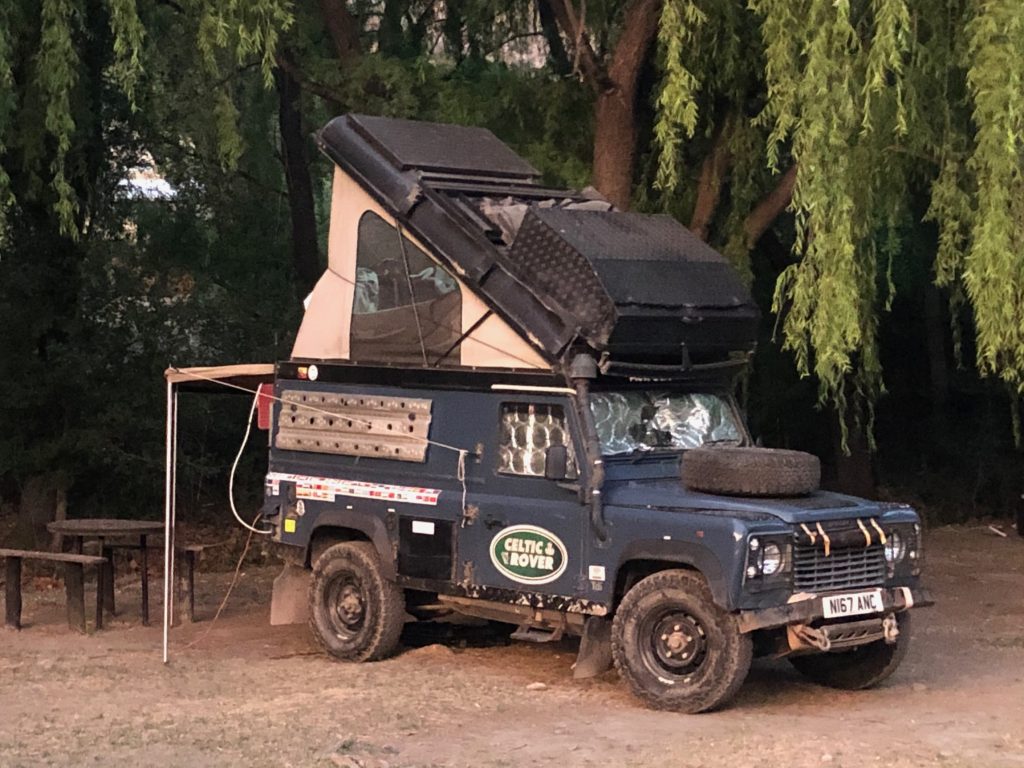 As the sun set on Nelson lee was happy to be in the “airy” bed area with her trusted Jack Reacher novel, back on the road again… 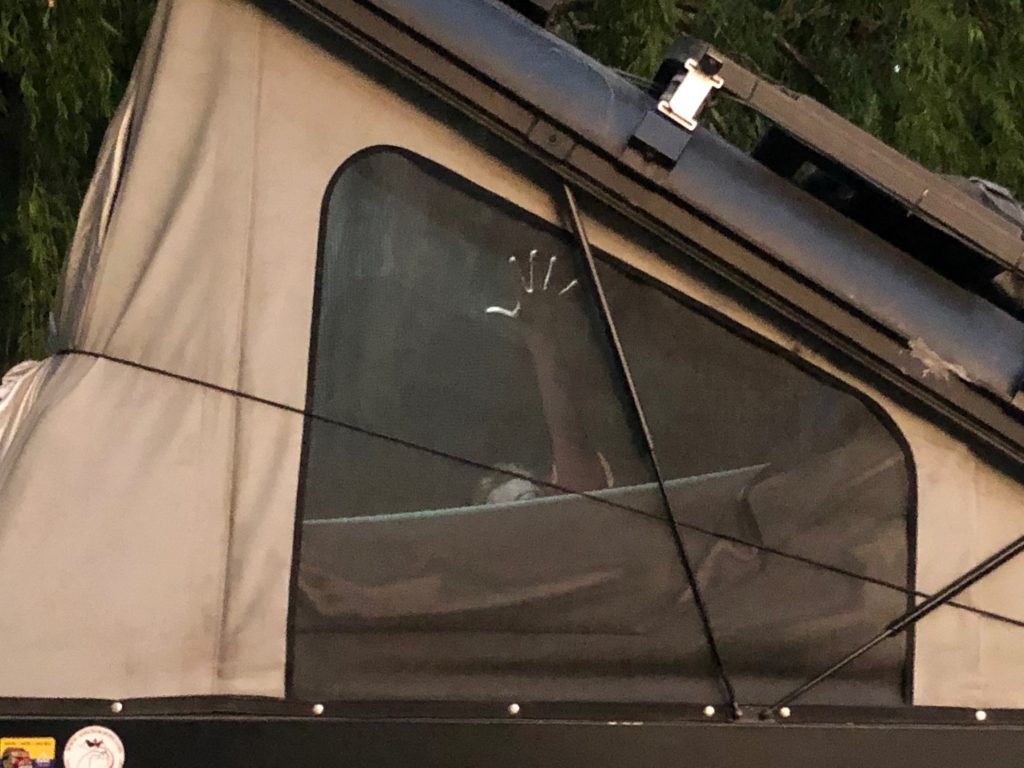 The next day was new years eve and I had booked us into a nice boutique hotel in the wine country just south of Mendoza, I had expected, western style, that we would be able to stock up at the supermarket and choose one of the many recommended restaurants in the small town for our New Years eve meal – I was to be disappointed on that front as by the time we got there and got organised it was 3pm and all the shops and restaurants had closed for New Year which is very much a family holiday here in Argentina.  Our hotel had a small kitchen but no restaurant (which anyway would have been closed) so we were in a surprising pickle along with a few other guests. 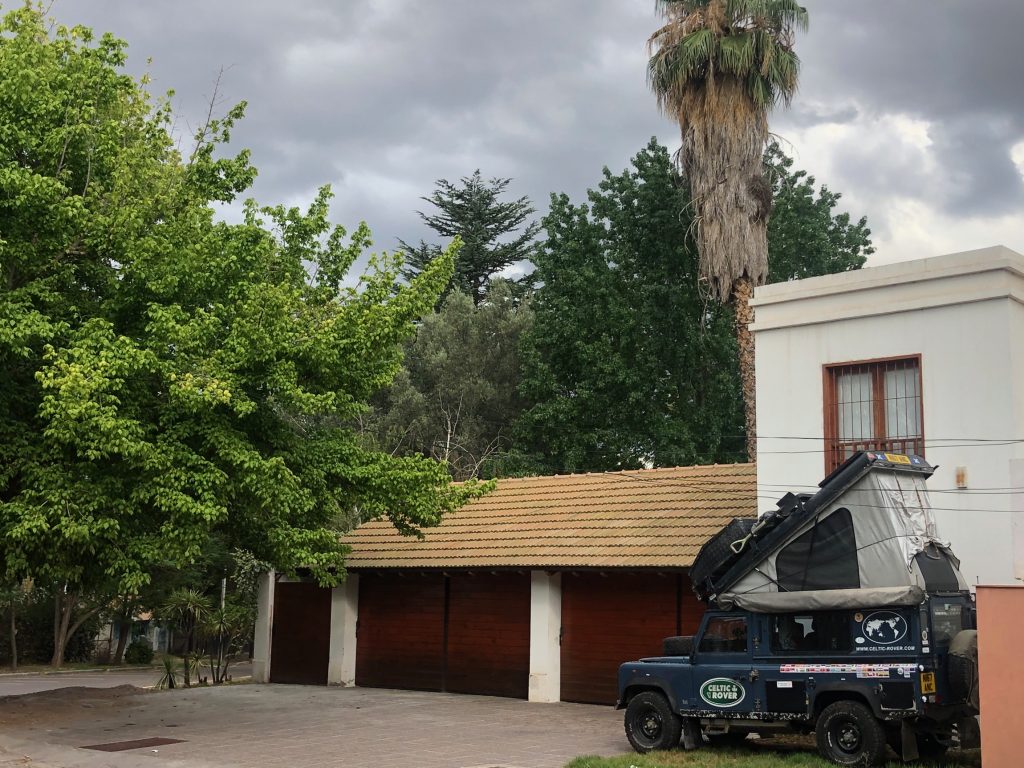 Some of them forewarned had managed to get some liquid supplies in, Nelsons long term storage system provided two types of pasta, pasta sauce, olive oil and balsamic vinegar plus a very helpful large bottle of Botanist gin, the owner of the hotel Bruce and his friend had some meat for the asado and other friends of his brought some salads so we managed to pull together a nice meal and a lot of drinks as we all made the most of the beautiful warm weather and the good company created by a little adversity 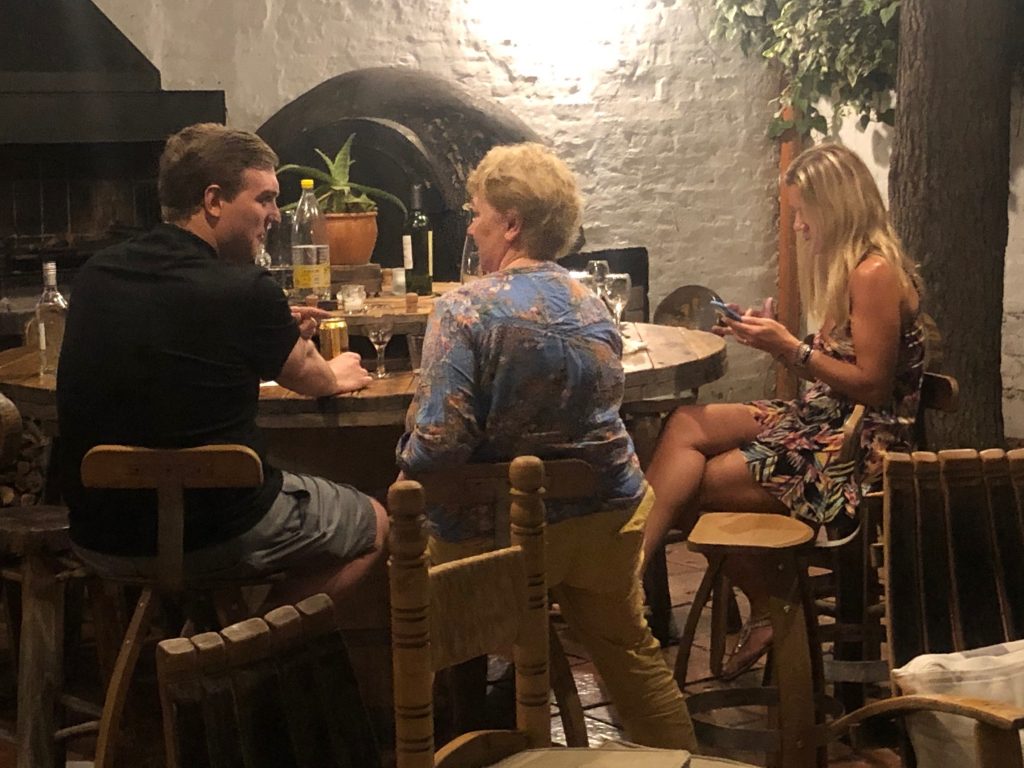 By the end of the night (just after 2am for us) we had made many new friends, gained a few more followers for our adventures and invited a few people to come and stay with us in Edinburgh next summer, it was lovely to see how people from such diverse backgrounds, ages and occupations could come together to create a lovely warm and interesting evening.

As the only sober person in the group I managed to hold my own until 2am but was able to bask in the smugness of being one of only three people in the whole place who actually made it to breakfast the next day before 10am!  Needless to say there were many dark sunglasses around the pool the following day.

Tomorrow we are off to wineries and canyons and start the proper overlanding part of this trip leaving the luxury of hotels behind us for most of the rest of the month as we head into the Chilean lake district and Patagonia….

Previous Sunshine in Santiago
Next Inky blackberry, cherry and plummy wines of Mendoza