We set off from Ulaanbaatar in good spirits, a bit sad to see Lee go back to the UK after such a big adventure together, but Toni and I were eager to explore the Gobi desert which we both had heard so much about. We made good time out of UB on the nice smooth tarmac and decided to turn off to see Ongiin Khiid and then go cross country through the mountains to the flaming cliffs. This plan nearly worked, the small snag was that the road ran out on a big plain after the mountains, at this point we knew were we were on the GPS, and we knew where the road to the monastery was – about 5 miles away across the open plain, but there was no road in that direction (west) just a north/south road and the dim edge of a ridge. So, after some discussion, we took the slightly risky option of heading across the open desert on a compass bearing to the end of the mountains which led to the monastery we made it to the monastery and had this idyllic campsite by the river (photo of campsite)

We cheated a bit as just out of sight is a nice Ger camp so we had a slap up dinner and were able to use their showers before settling down for the night by the stream. So a good end to the day and a good start to Tony and I travelling together.

The next day after a good sleep (and a breakfast of Tony’s special cold fridge overnight soaked porridge with sultanas and apricots) we set off down the very rough track towards the flaming cliffs location and after the first section which was a bit bone jarring for about an hour made very fast progress across the open desert on the mostly smooth piste. The cliffs area was very scenic as you can see from the pictures below but the downside was a very strong wind so we decided to press on to the Yolyn An Canyon to the south which we reckoned was more likely to be sheltered from the wind.

As we pottered across the nice flat piste at about 60kph we did a driver change (we usually switch every two hours to keep concentration levels up as our number one rule is “don’t roll the truck” a short lapse of concentration at speed on a rutted piste could lead to just this event). I took over the driving from Tony and got up to speed with Robbie Williams helping me along, suddenly I heard a change in the engine note and a hissing like air escaping from a tyre, immediately I slowed to a stop and switched off the engine to investigate (fully expecting that we had picked up a puncture), noticing some drips of oil from under the engine I popped the bonnet and though “oh fuck..” there was engine oil everywhere on the left side of the engine, I mean liters of it sprayed all over the engine bay (thankfully the opposite side from the hot exhaust and turbo).

Tony was great as he put up with me chanting “do it slow do it right” while methodically getting my manual and my tools out. My first thought was that one of the oil lines in the car had come right off and dumped all the oil out of the engine on to the desert in the end I found that a stone had clean broken off the oil pressure sensor and that had released .. all the oil in the engine into the desert in a few moments. Fortunately I worked out a way to fix the hole in the engine by moving some parts around and plugging it with another sensor but then we still had a big problem as there was no oil in the engine, on this trip there are few things that can really stop you – one of them is blowing up the engine, and running an engine with no oil is a good way to do just that. On the other side it was 7pm and we were 70 miles from the nearest road, 100miles from the nearest town, in the middle of the Gobi desert so no recovery truck was going to show up before nightfall if we could even organize one and it would be looking for us in the dark if at all. I decided to put all the oil I carry for the gearbox, differentials and the small top up container of oil into the engine and scrounged another liter from a car which appeared from the horizon, its lights on already.

So in total we had put 2.5 liters into and engine that normally takes 7.3L of oil, unsurprisingly the oil did not show even on the bottom of the dipstick but I started the engine carefully and the oil pressure gauge showed positive oil pressure so we must have just enough for the engine to pick up oil and pump it around !

I broke out in a little cheer, tempered by the knowledge that this was all the wrong sort of oil and the pressure was a bit on the high side, but I guessed that a relatively short run into the town would do little damage as long as we had pressure.. and so it was. We got safely to town about 9pm, stopped at the first garage to buy some oil (the engine took 5L extra to show full on the dipstick) and thankfully found a nice hotel for lamb steaks, a shower and a good sleep before heading into town in the morning to get a proper change and repair.

While eating our lamb steaks we had the good fortune to meet up with a local travel guide who was able to direct us to a good garage in the town. We were very surprised to find an alladins cave of a place with well organized (toyata) parts and even more surprised to find that the toyata oil sensor exactly fitted the hole left by my disintegrated land rover sensor. So within a few hours Nelson was all fixed up and had a “double” oil and filter change to ensure all the gearbox oil and other stuff we had used was fully flushed out from his systems. 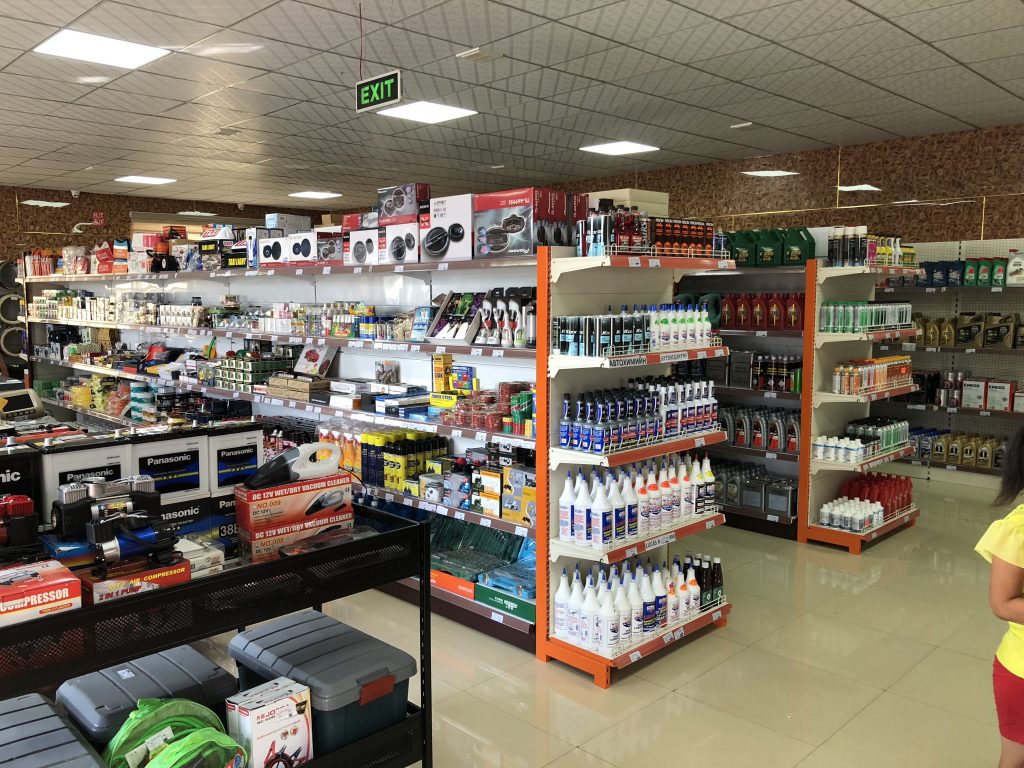 We were relieved to have survived the “oil crisis” and I now travel with a full 7 liters of engine oil, which in the past I thought of as a wasteful extra weight, and a full new set of differential, gearbox and transfer box oils having used them all to get us out of the desert. Nelson was back on the road again by noon, we were a bit sleep deprived, but otherwise OK and looking forward to visiting the famous dunes at Mongol Els later in the day, the same local guy at the hotel had assured us it was about a four hour trip…..we normally add 50% to what the locals say, but in this case 100 percent would have been more accurate – and then we have to drive back – see next post for why…….

Previous A TALE OF TWO CITIES
Next Race Against Time