Having fixed our oil problem by noon we set off into the desert again in search of the famous sand dunes of Khongoryn Els which were about 100miles away from the town of Dalandzadgad where we had limped to the previous night. Our journey started well with one of those beautiful smooth new highways to the Canyon of Yolyn Ann, at some times of the year this shadowed canyon is full of blue sheet ice, a little seasonal glacier which is a reminder of how cold this region can get in the bitter winter, the ice lasts until June or July. As it was near the end of July we were able to drive up the glacial remains and right through the canyon, in one of those surreal moments that sometimes happen with this type of travel we were caught in a small traffic jam in the canyon as some herders had decided to take their flocks through the canyon followed by a little posse of 4WD tourists so we pulled nelson to the side and let them through 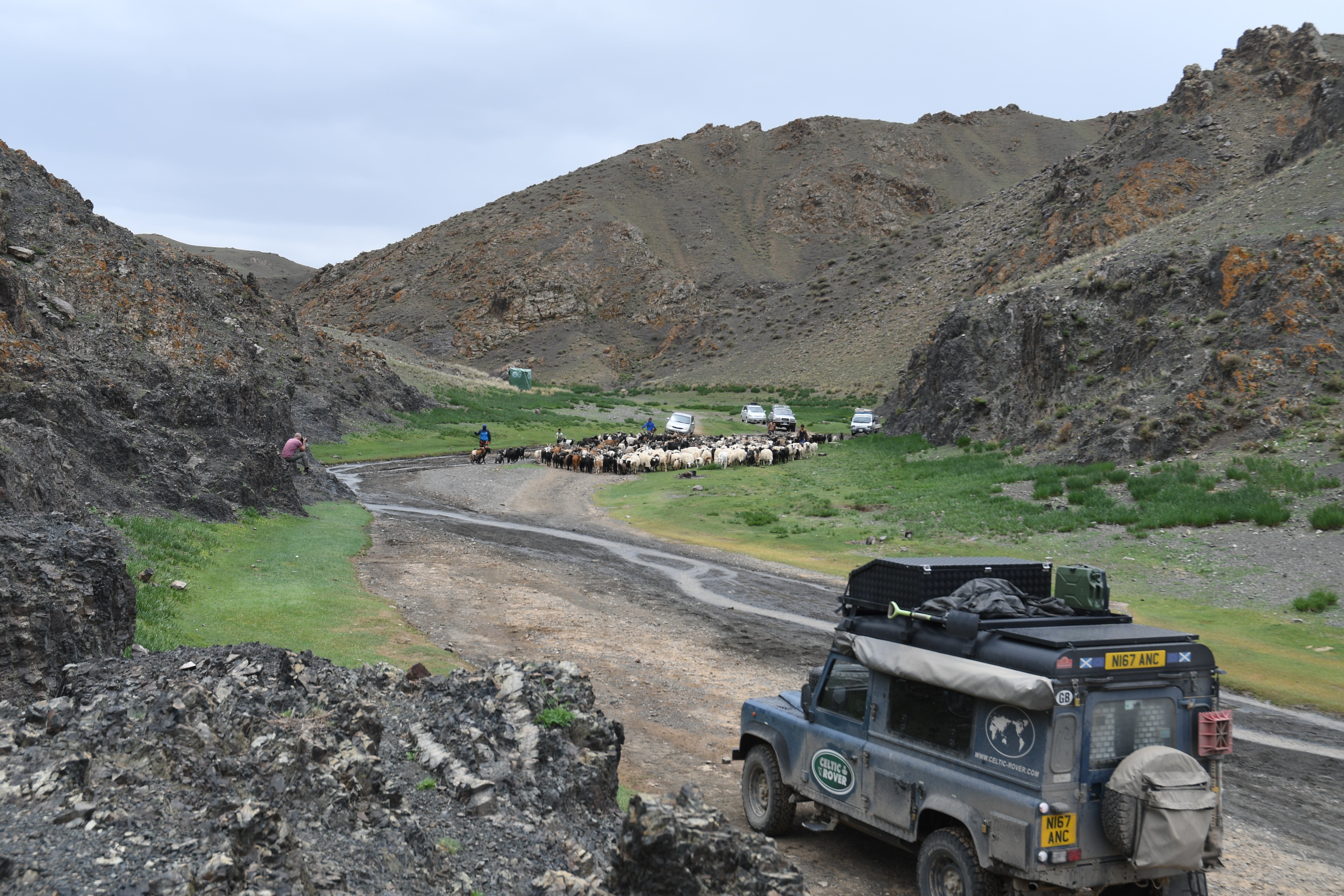 At the end of the canyon we were in a dry river bed and Nelson capable as always pottered happily up the river for a few miles until we hit the road where its bridge cut across the river bed. This was one of the occasional times where we need to properly use the low ratio box to get up the sides of the river bed onto the much higher level of the main tarmac road. It is possible to get to most of the big towns in Mongolia with a normal car, and a good bit of skill which the local drivers demonstrate by overtaking us in Toyota Prius’s on a regular basis, but once you go off road there are some quite technical tough sections on many of the trails and even the locals are in 4WD trucks like ours.

We headed on down the tarmac road for another 20miles and then struck out for the sand dunes across a valley that had a road marked on the map and on the sat nav but the reality was a maze of trails that bore no resemblance to either. In this common situation we tend to follow the well beaten trails as long as they head in generally the right direction, trying to stick to the map or sat nav trails usually ends up at a impassable crossing or a horrible boulder field so we “go with the flow” more having learnt that lesson. Still the run to the sand dunes was very difficult and technical our speed dropped to 10 or 15 miles per hour for long sections with little bits of faster running on the open piste when the dreaded washboard was not too bad. In total the trip to the dunes actually took us about 6 hours instead of the locally recommended 3 hours so we arrived quite late, about 8pm, to set up camp by the river.

The dunes themselves arequite impressive, we got a few shots as the sun was setting and planned to explore them a bit more in the morning after a well earned dinner watching the sun finally set over the dune field. 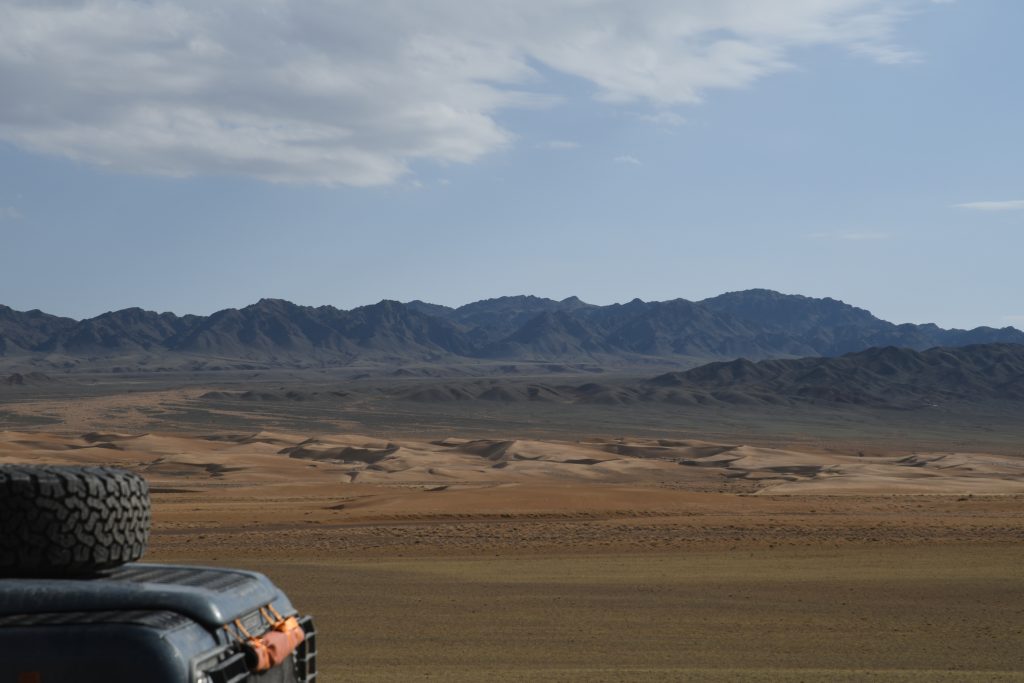 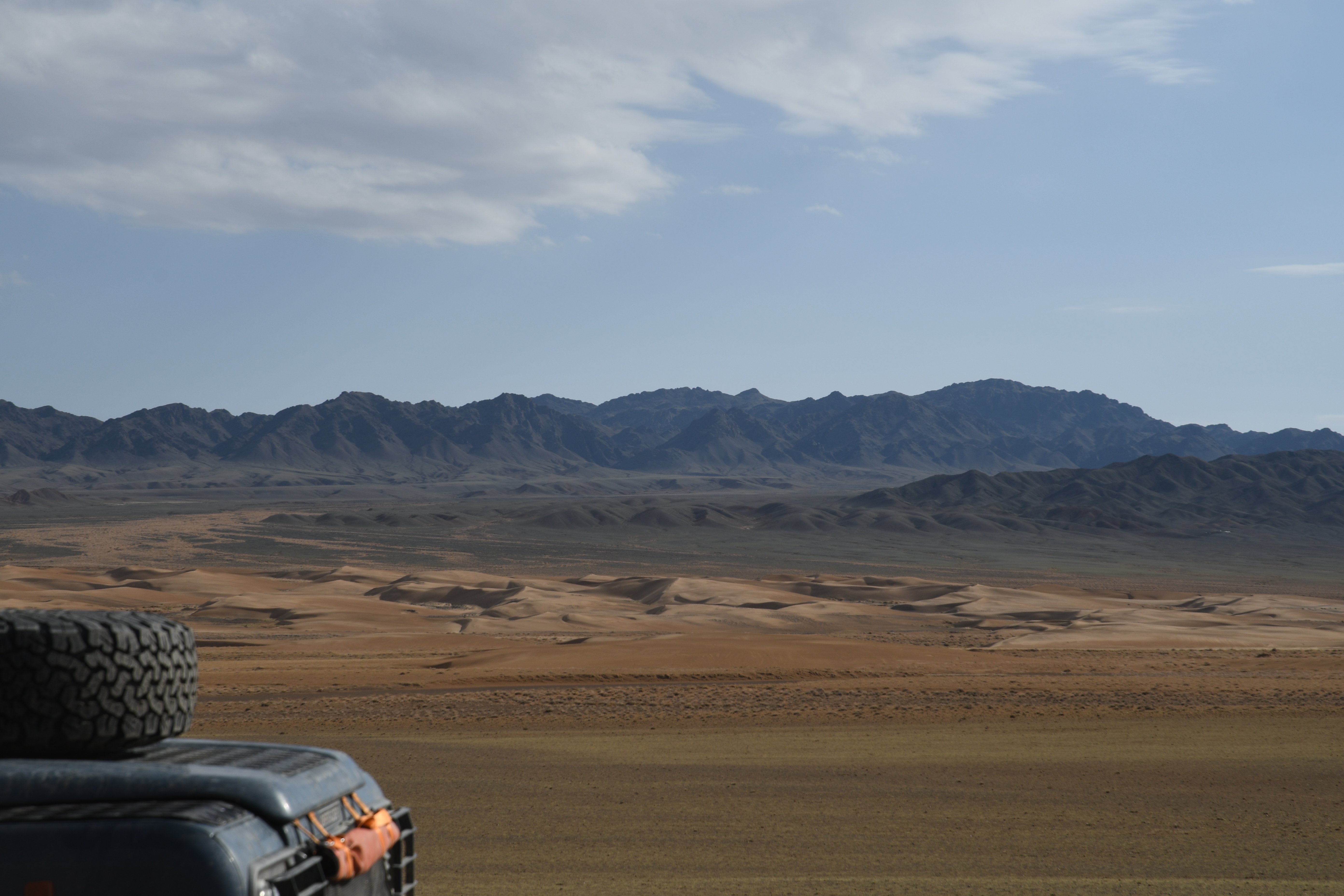 As we got out of the truck I said “I smell fuel” thinking that the battering ride had caused a leak in the petrol container in the roof that we use to refill the Coleman cooking stove. We were not to be that lucky, a quick check under the truck revealed the alarming sight of diesel leaking pretty fast from the main fuel tank onto the desert floor. Having checked that the drain plug was still tight I came to the conclusion that the source of the leak was behind the stone guard (the tank is protected by a stone guard for its full length) but to get at the leak would mean dropping the very heavy nearly full tank and even if we did that the fuel would make even a temporary repair quite hard.

The rate of loss of fuel was quite fast it filled a liter container in under half an hour, so we would lose at least 30 liters overnight, if the leak did not get worse, from a tank that had about 30 liters left in it or perhaps more….We do carry about 40 liters of reserve but the reserve only pumps into the main tank and we did not know at this stage if it was a crack in the tank that would get worse as we drove or a puncture. The good thing is diesel is no where near as flammable as petrol so there is no real danger in driving with a leak like this specially in the desert where the sand would prevent the spill being a danger to other travellers. 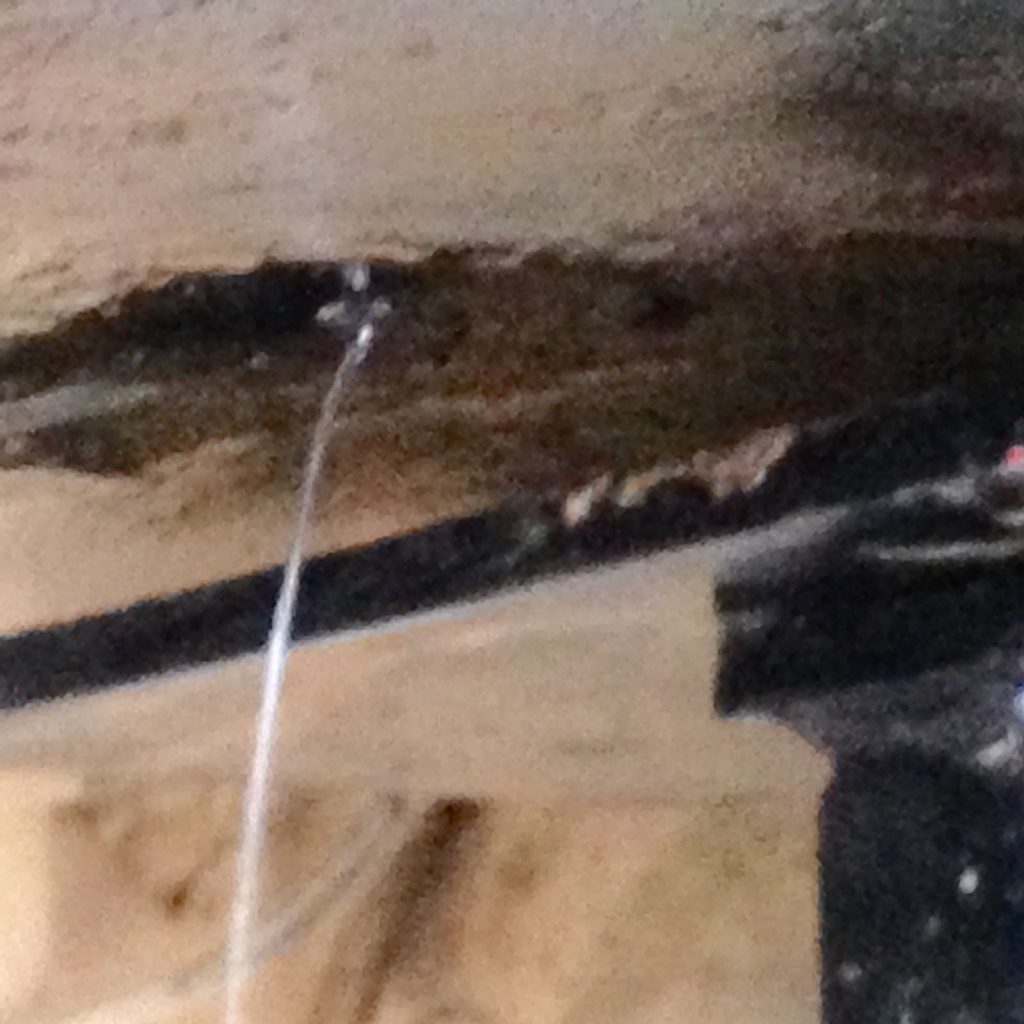 We quickly drove over to a nearby tourist Ger camp and managed to find a translator and a group of local drivers for advice as darkness fell, there was much discussion, some felt we should empty the tank, drop it and repair it on the spot, some thought with this leak and the reserve we could get to town for the morning and get it properly fixed – but that would mean crossing 70miles of rough desert track in the dark and then 30 more miles of good road.

In the end after much chat back and forward, and once the fact that we had a reserve tank was explained, we all agreed the best path was to set off into the falling darkness, all lights ablaze, and try to find a way across the rough boulder strewn tracks to civilization in the middle of the night, this is breaking a handful of my core safety rules – driving at night, driving when tired, driving in the dark off road so we agreed to take it slowly and rotate driving hourly – we also agreed that if we ran the tank out we would not commit the reserve until we had slept and the sun was up. This agreed we pressed on through the deepening darkness.

Driving in severe off road conditions in the dark is quite a challenge as it is very easy to loose the track, we had to back up on many occasions when this happened even occasionally to get out of the car to find the way, the spotlights on the truck were quite good and really helped the light bar less so. We had five hours of very stressful driving to get out of the rough roads all the way watching the fuel gauge dropping bit by bit, hour by hour. To make things a bit more complex and add to the tiredness and fatigue poor Tony had some tummy troubles….a later post will deal with the realities of desert travel and toilet stops, at least the darkness was good for that !

Finally we made it to a point just outside of town with a quarter of a tank left at 1.30am turned off the road and fell into our beds after I set up a funnel and a 5L container to catch some of the dripping diesel, which would be full to overflowing 5 hours later when we got up.

The next day we arrived at the garage that had been so helpful the day before as they opened and explained our problem by showing it, the folks speak as much English as I do Mongolian, none but a mechanic came to see the truck and understood the problem, including the complexity of the leak being behind the stone shield. After consultation they came back to me and made the universal crossed arms “no can help” sign – they did not want to take on the challenge ! At this point I asked, with sign language, if they could direct me to someone who could help as I knew from experience that just driving around looking for a place was not likely to be successful so I did not want to just drive off –sometimes just waiting around looking sad and helpless is a good tactic and eventually the owner wrote OK on my pad and one of the mechanics got on his bike with a wave and indicated that we follow him. 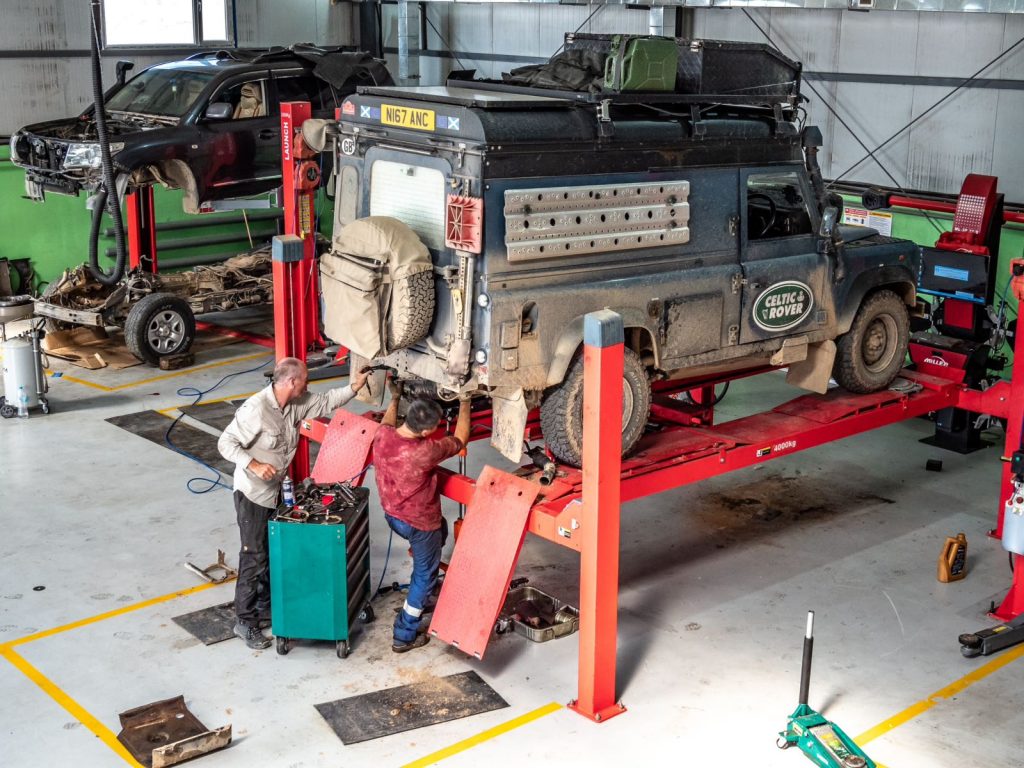 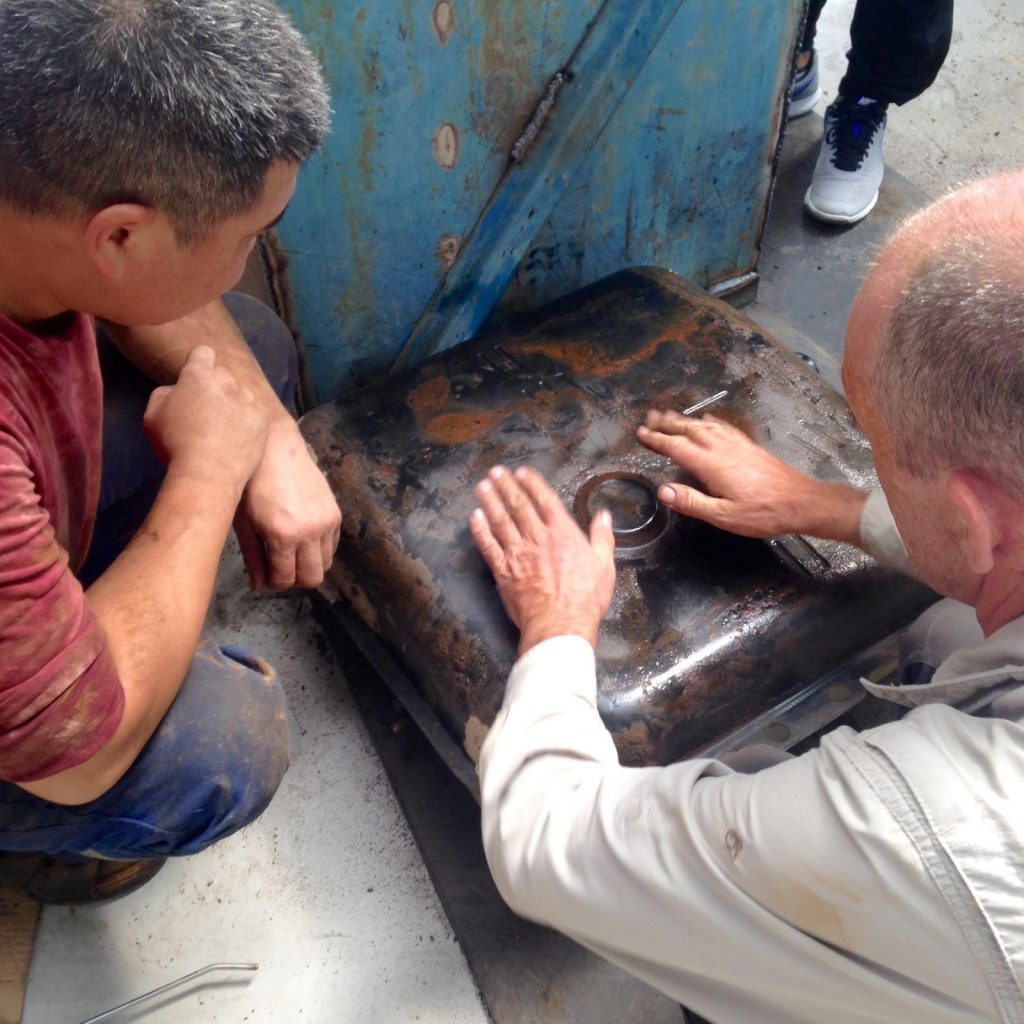 About a mile later he took us to a unassuming mud walled compound with a sliding iron gate, rattling the gate he met with a sleepy looking guy in grease stained cloths and explained the problem, the gate squealed back and we drove into the compound only to find that there was a big beautiful clean high tech workshop with two four post lifts surrounded by lazer alignment kit, bearing replacement presses, and two dismanted Toyata land crusiers plus a big spares shop. We would never have found this from the outside it was totally hidden from the road – thanking our mechanic from the other garage and giving him some money for his trouble, we set about repairing Nelson (photo on ramp).

Fortunately I carry a full workshop manual for Nelson, I was able to use the drawings in there to explain the order of dismantling the fuel tank, the mechanic had charged off undoing things and I was able to explain that dropping the tank without undoing some things first would be bad…once he saw I knew what I was doing we were able to work together quite well as I had taken the tank out myself twice and we found the source of the problem (photo of leak)

It seems now that a small sharp stone had managed to get between the fuel tank itself and the stone guard that protects it, before heading into the desert I had filled the tank to brimming and the 80kg of weight, combined with the desert “yumps” had pushed the sharp edge of the stone through the wall of the tank creating a, thankfully, small hole in the tank.  Once we had the tanks stone guard off the source of the leak was clear and we were able to dismantle the tank system and get the offending hole welded – welding a fuel tank which still has a bit of diesel in it is not a task I would relish as it can blow up, but the guys cleverly welded a patch on the tank, sticking it on first, meaning that the fuel and the welding did not mix.  They also installed cushioning between the fuel tank and the stone guard to ensure that the weld was supported and to prevent any further stones from making it into the gap.

So a ruptured fuel tank is one more thing to add to the list of damage that the Gobi did to give you an idea of how teeth jarringly bad the washboard can be three days in the deep Gobi lead to the following damage (that I know of) – holed main fuel tank, drivers door frame cracked right through, instrument binnacle mounting cracked off, I pad holder shook apart, ceiling fan mounting sheared through, roof gas strut broken, loose wobble in the steering, oil pressure sensor destroyed.  Amazingly so far the suspension has been great but the truck seems a bit “bouncy” so lets see what we find at the next check as our two friends have blown multiple rear shocks and a steering damper so far.

Previous OIL CRISIS
Next Sometimes you just have to stop