Sometimes you just have to stop

This evening Tony and I are in the deep Gobi desert, it is amazing to be in a place so remote and silent we have not seen a soul since early afternoon. Mongolia has a tiny population of about 2.5m people in a country which is as wide as central Europe and the Gobi is the most unpopulated area of Mongolia so it must be one of the most remote places on the planet apart from the polar Tundra and Ice regions. As I am typing this a kind of sunset glow is all around me as if the rocks are giving back some of the light they have absorbed during the day, the sun has set and the last glow in the sky is fading as the first stars peep through on the darker horizion.

This is a day where we sensibly stopped about 5.30pm, just turned out of the faint trail we were following and set up camp in the middle of the desert as we have had two high stress days as you can read in other blogs – firstly we had a full engine oil loss 40miles into the desert and 70miles from the nearest town, which we recovered from in the field has been fixed – secondly we got again about 100 miles from town at the Mongol Els dune fields and noticed that the fuel tank was fast leaking diesel and had to drive through the early part of the night across the desert trials to get to town before our fuel leaked out – again fixed today so we wanted an easy day with an early bed, sometimes you just have to stop and with Nelson we can just turn into the desert and set up camp we have everything we need and we leave behind only tyre tracks which fade in the desert winds. 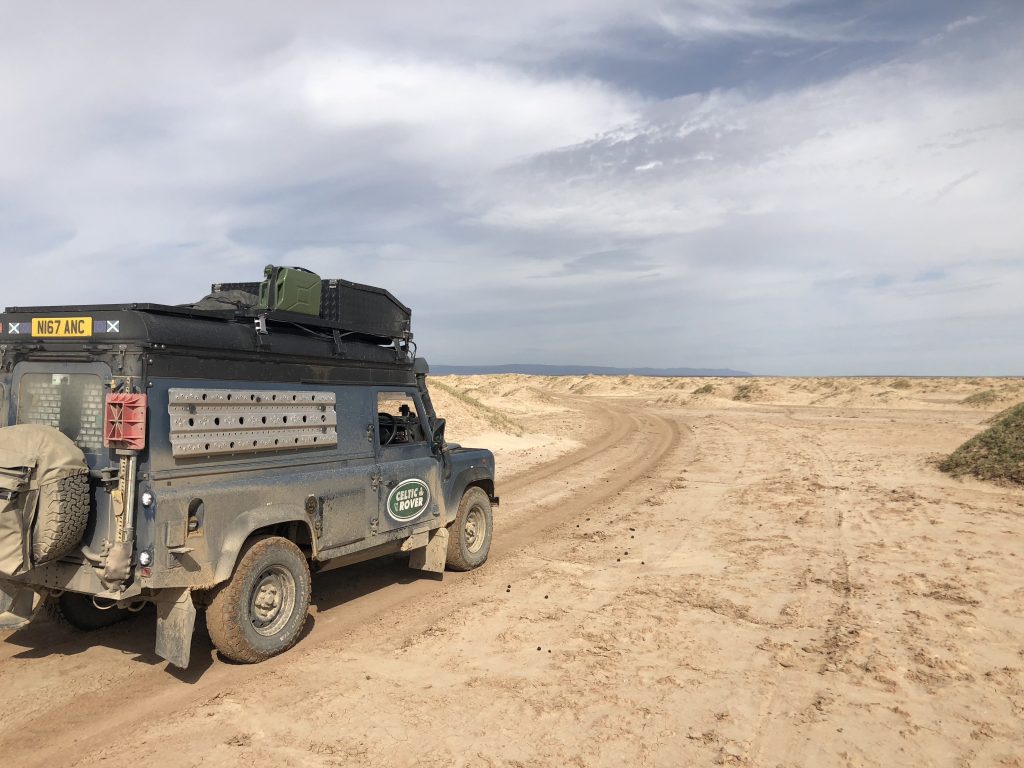 So an easy day with a nice dinner was organised, things were tidied up and put back in the right places after all the bush mechanics and clothes were washed, still leaving time for a walk up a local hill and some easy chat about our adventures of the last few days.

The fact that we are in the beautiful deep desert is not altogether planned as we think we took a wrong turn on the track and we have not seen another person or car for the last three hours of our traveling and not a soul has passed us in a car all evening. So this is the real desert, no lights in view, no tourist Ger around the corner or highway just over the horizon. As far as we can work out we have to head towards the end of the mountain range we can see across the plain about 35miles away hopefully to connect to a faint sandy trail that connects to a more substantially travelled trail on the way to relieve the sense of unease at being so remote in a single car.

We have very good GPS systems and maps, the only problem is that there are no marked roads on the GPS and the map is quite high scale so we know there should be a trial (not a real road the nearest of them is at least 70miles away in the wrong direction) but we just don’t quite know where it is, we know the road crosses the plain and cuts beside a mountain we can just see in the distance so we will head there tomorrow and see how we do. I did a bit of checking from the nearby hilltop with my binoculars, I can see the plain we have to cross which is about 40miles wide however the glint of water in the middle is a bit of a worry so fingers crossed I don’t get stopped by a river for the second time in the trip.

The next day we headed off into the plain having plotted our position on the map we knew we were some way south of the intended road so we took every possible track to the north while negotiating a very sandy track and eventually we joined the main track and made steady bumpy and slow progress to the small town of Bogd, which when it rains is very appropriately named, as we got into the town I did think we would have been more sensible to go into the deep Gobi desert with one or two other 4WD cars instead of just the two of us in one car.

(PS don’t worry about the risks in this blog, thanks to the wonders of satellites positioning we know exactly where we are within a 5m box and have emergency satellite communications if really needed)