Our first major shakedown trip was a 3300 mile loop around the Baltic Sea, the long way round via Munich due to Gerrys work commitments, the whole trip took four weeks.

Initially the long run from Edinburgh to Munich was done in three stages, down to the Ferry from Newcastle to Amsterdam, a long day from Amsterdam to Koblenz and then a further long day to Munich.  The German autobahn made this a simple trip taking about 10 hours of driving the only exciting bit was when my new roof box opened at 100km per hour on the outside lane of the autobahn, which led to a good bit of repairing as you can see in the picture below.  Thankfully the contents of the box are stored in Wolf boxes and so stayed in the roof box despite the significant air brake effect, the lid was a bit bent but my big hammer sorted that out. 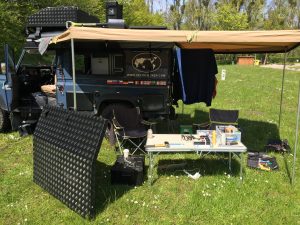 Along the way I was following the advice from other experienced overlanders and doing a regular 500 mile check on the undersides of Nelson, kerbs in Polish motorway services proved useful as impromptu jacks as you can see below.  I managed to sort out two engine oil leaks by nipping up some oil cooler connectors, a front diff had a bolt half out which was corrected and the rear diff was leaking oil from the prof-shaft oil seal so that had just to be kept topped up, using a liter of oil through the whole trip. 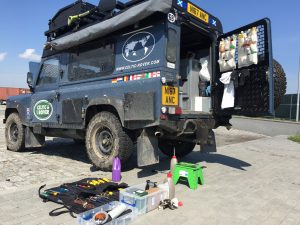 Next came a lovely few days through the Austrian Alps and into Hungary with the usual very well organized German and Austrian campsites complete with Wifi and hot showers. 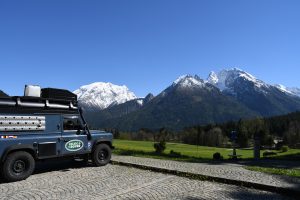 Next I headed up to Gdansk through Poland, a very nice city with a medieval crane you can see below and a lovely waterfront cafe, super biking trails and stunning beaches, Poland was the first of our good surprises from this trip, we did not know much about Eastern Europe before the trip but it is now one of our favorite spots.  Lee joined the tour in Gdansk having been elected into the Royal Society the day before in Edinburgh and we headed off to Kaunas, Riga and Tallinn in our trip up the Baltic states 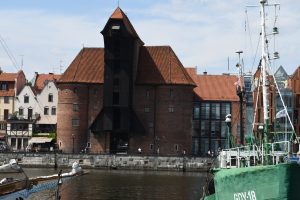 All these cities are worth a visit but the jewel in the group is the city of Tallinn which is a beautiful compact and well preserved medieval walled town that you could wander around for a full day and still discover new sights.  We tried to alternate between city visits and wilder camping one of our favorite spots was on the coast of Estonia where we were alone in a super camping spot on the beach after driving about 30k over gravel roads as the campsite we were heading to was hosting a wedding 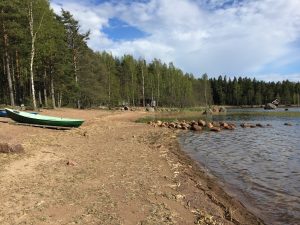 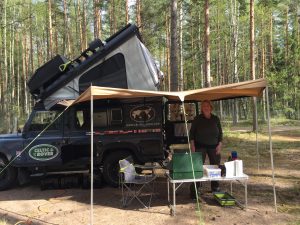 The cultural highlight of the trip was Saint Petersburg and the nearby summer palace of Peterhof which we reached on a very impressive hydrofoil ferry, we managed to investigate a small proportion of the Hermitage art museum and topped it all of with a visit to Swan Lake ballet in the Hermitage theater. 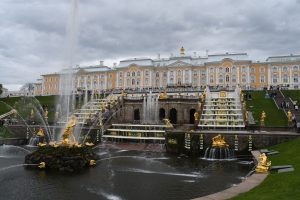 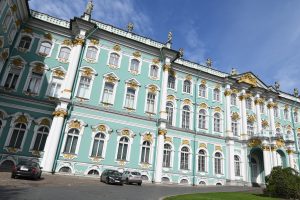 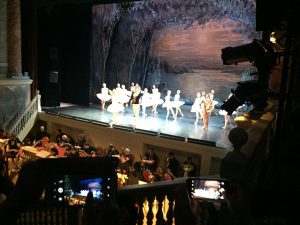 I had been in some fear of the border crossing into and out of Russia but in both cases the procedure was straightforward (at least once we found the right pre-booking spot on the Estonian side) and the people were pretty friendly at each crossing, both taking about 2 hours to complete which was about what we expected.

Next on our list was some relaxed camping in Finland including an night spent with a 60 strong biker group who were very interested in Nelson and a nice day in the old wooden town of Porvoo before heading to Helsinki itself and the boat to Stockholm.  This boat was the biggest boat I have ever sailed on and even had its own massive shopping mall down the middle.  The size of the boat, the blue sky and the smooth sea made for a super relaxing crossing to Stockholm in Sweden.  Here Lee had a conference in the truck with the director of one of the local vet schools that she works with and then I had to drop her at the airport to head off to Chengdu in China for a business visit with the team that look after the Pandas.

I was left to head down through Sweden with a mixture of wild camping and campsites all very easy and relaxing.  We had been watching the TV series “The Bridge” so I changed my route to take that bridge between Malmo and Copenhagen as you can see below, unfortunately is was a no stopping zone so a quick snap was all I could manage. 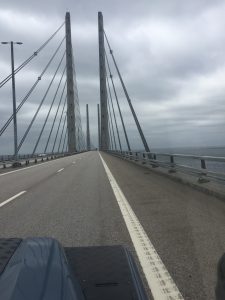 In copenhagen I had the first bad weather of the trip so learned more than I intended about Danish history as it was warm and dry while outside there was a gale with sideways winds but this cleared up by lunchtime and I emerged into the middle of one of Copenhagens big festival parties.  This one is called “distortion” and is a techno funk party that takes over the streets of the city including some very interesting versions of the little blue mermaid as you can see. 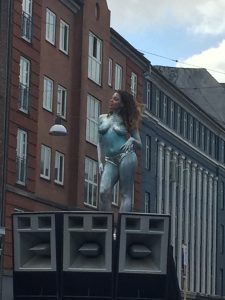 After partying in Copenhagen for a while I turned for home via Groegen in Holland and had a pretty smooth ferry home.  Overall the trip went well with all the systems on the truck being well used and tested.  Mechanically things went well a small vibration at 50mph may be due to a propshaft bering being on the way out but it was not too bad so its on the checklist for the post trip work on the truck along with full servicing oil change all ahead of its chassis change in July.

Next big trip Morroco in September,

Previous Cooking in a truck
Next Wonderful Morroco