The end of the world….Ushuaia

We left our friends Camille and william rebuilding their engine and headed off to Ushuaia along the grandly titled “route find de le monde” or route to the end of the world, Ushuaia is on the big island of Tierra del Fuego literally fire island but it is very reminiscent of Shetland, bleak barren and windswept in the northern parts, we had heard tales of the Patagonian winds from travellers who were coming up from the South as we headed north and we were not to be disappointed.  As we headed south from Puerto Nateles I was hanging on to the steering wheel and keeping the speed down as the wind gusts buffeted us from side to side, it was mostly behind us so not to difficult but we were passed by an ambulance on the way down and later found out that an American motorcyclist had been caught by a gust and blown into a barrier on a corner and died so it was pretty serious stuff.  Lee, less practiced than me with Nelson, let me do the driving and only occasionally shrieked :-))

When we got to the ferry to Tierra de Fuego we were faced with a very long queue as the winds had shut down the crossing, the land rover was rocking from side to side and I had to get out to help Lee get from the front to the back of the truck as we were afraid we would lose a door without someone hanging on to it, the shipwreck on the way shows some of the roughness of the sea with white horses on the water as far as you can see. 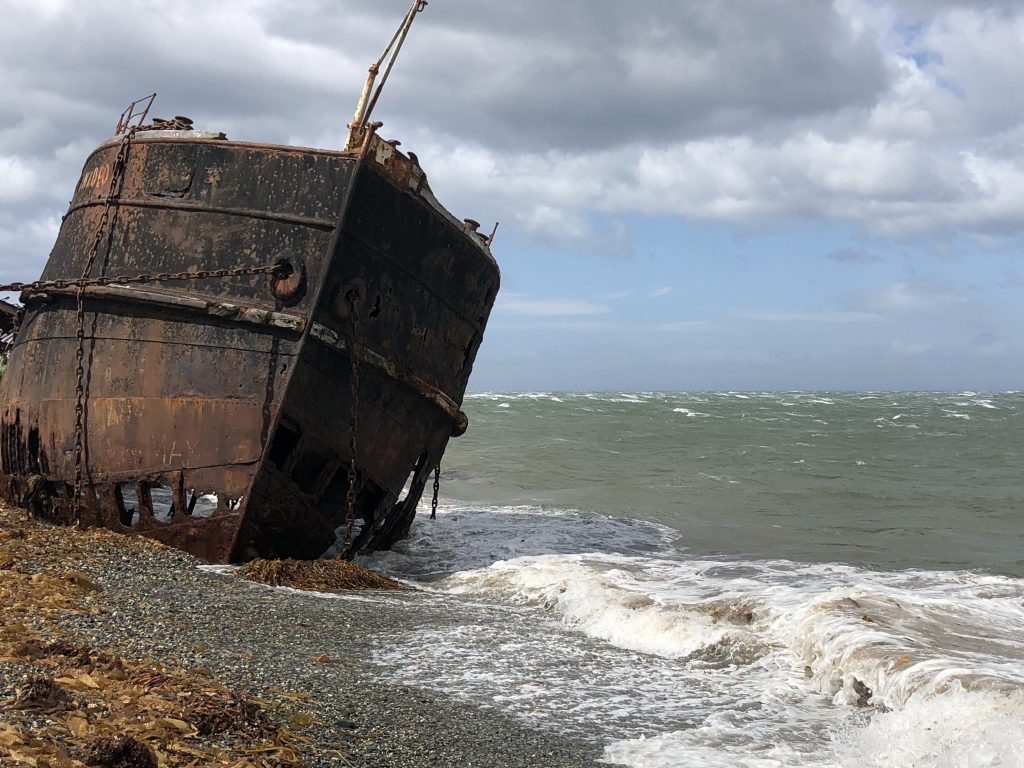 Suddenly the wind dropped and through the rain I could see the ferry moving from its anchor point in the shelter of the bay towards the loading ramp, it was one of those comical moments as the line shuffled up and Lee, at this point warming up a tin of campbells chicken soup to keep us going, had to hang on to pots and soup as we moved forward to the ramp.  Thankfully it took a while for the ferry to get in position and we could scoff our soup (which was lovely) and get in position for the run on to the ramp.

Now this type of ferry has no moorings, he just accelerates gently towards a concrete ramp and uses the motors to keep in position while the sea and wind try to blow him off the ramp, we were towards the end of the loading and I guess the full ferry had settled a bit so the sea was breaking to about 2 feet deep in front of the ramp to the ferry.  Lee said “I guess we cant get on there then” just as I said “hold on” and went for it we managed the ramp even though it was moving slightly sideways and claimed our last place on the Ferry, which of course meant we got soaked with spray all the way across the short crossing as the ship pounded through the waves, Lee who is prone to sea sickness stayed glued to the passenger seat only whimpering a little as we rocked around. 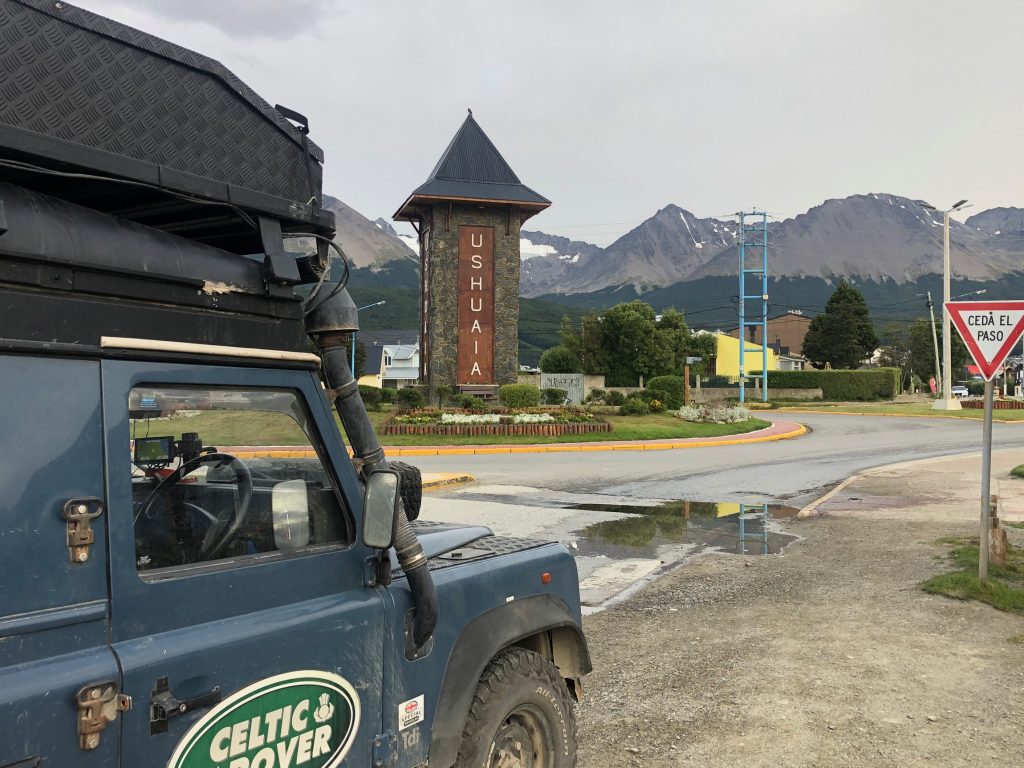 That night we stopped at a nice tourist information place on the island, it is bleak and windswept so a nice set of bathrooms with a hot shower in the lee of a small hill is a real oasis on the otherwise long run down the island, for the first time we did not put the roof up for fear of the wind and managed to sleep quite well top to tail on the narrower lower bed while the Land Rover rocked gently in the wind. 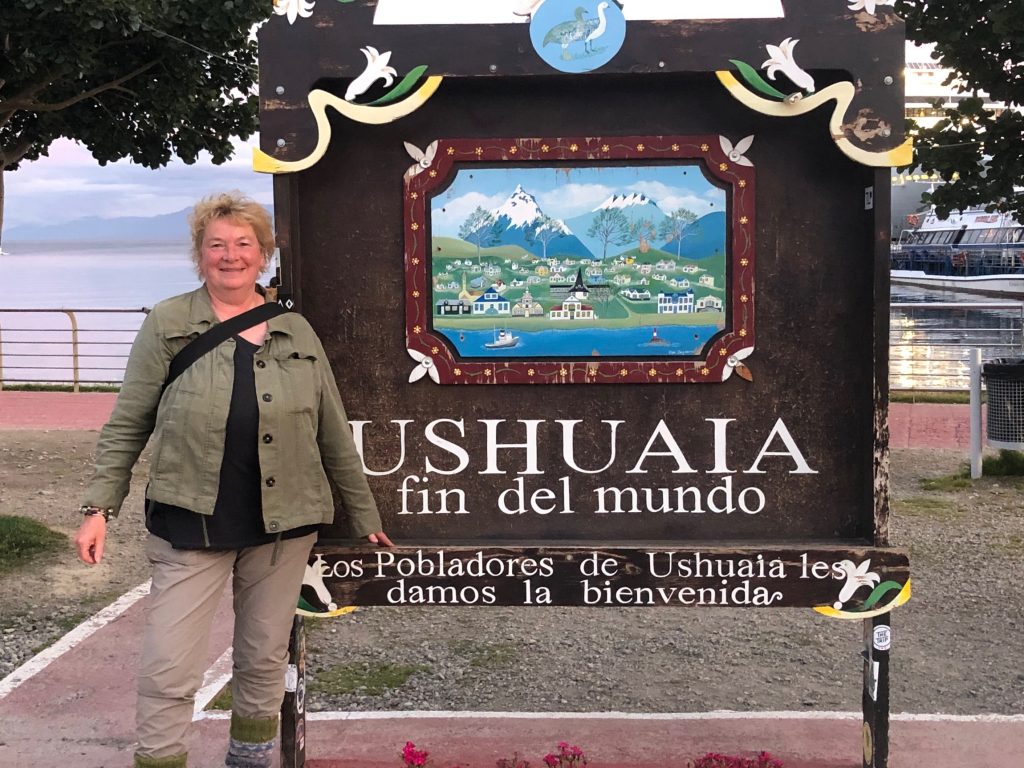 The next day we reached Ushuaia and we met up with Tony who had landed a few days before the planned “crew change day” on Monday, great thing was he was there and was carrying the critical spares needed to finally fix the broken suspension rod so that for me was the first order of the day.  Looking after the truck is an important part of the routine of the trips but is always a bit stressful in case in trying to fix one thing, which we have a spare for, we break another thing…which is always a risk.  I had tried to change the rod myself as it is just two bolts but I could not get enough leverage on the big bolt and so took it to a garage, principally to get it on a ramp to improve access. 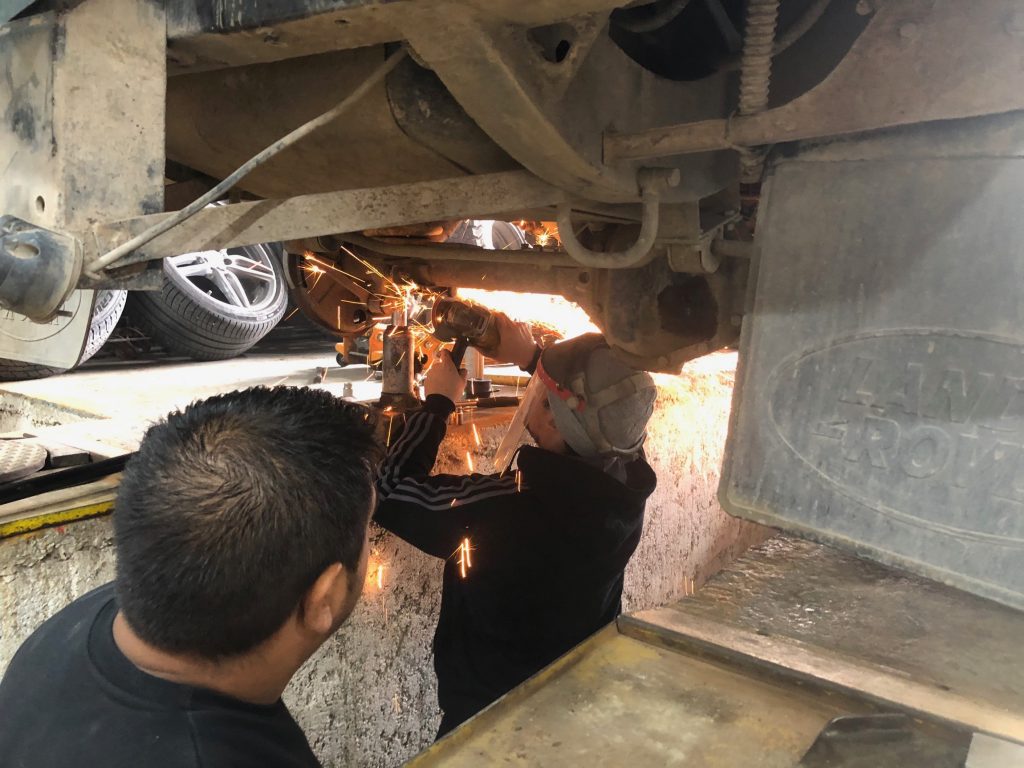 Well then started one of those sagas that can happen, to cut a 6 hour story short the repair to the rod had accidentally welded in the bush so in the end we had to use a grinder to cut out the bolt and the bush to be able to fit the new rod, just as well I gave up in the hotel car park and went to the garage!  I have grinder and blowtorch at home but not in the truck so the “big boy tools” were needed and finally we were fixed and back on the road. 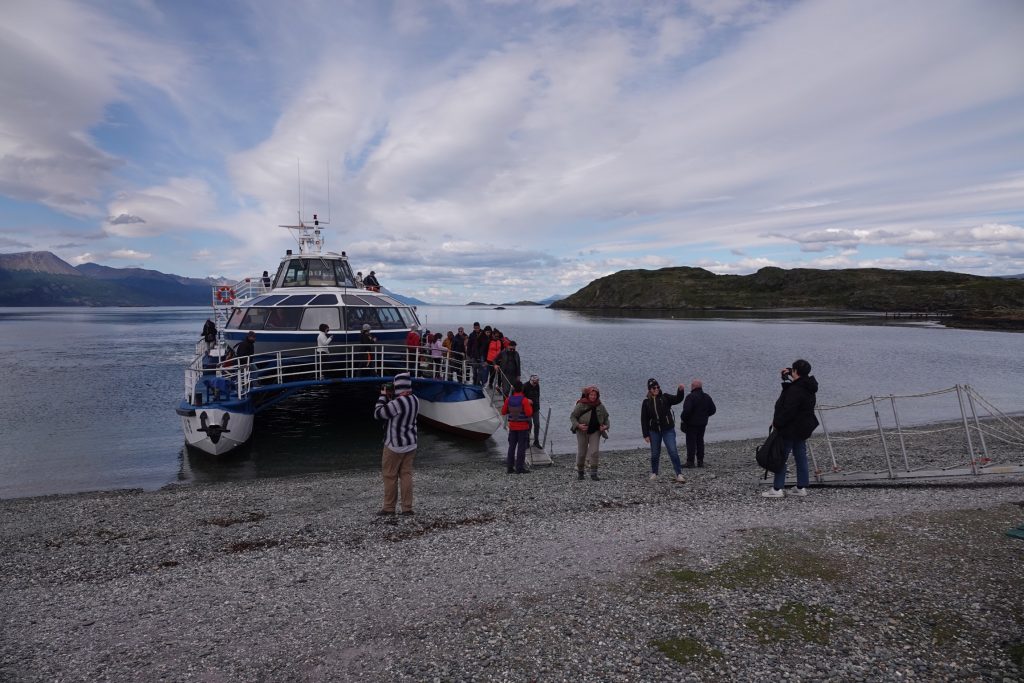 Lee and I headed off to do some sightseeing, all the way down from Santiago Lee had been reading about Darwin and his voyage in the Beagle so each evening I was given a verbal update on his progress, so our first order of business (once Nelson was fixed) was to go to the end of route 3, which is as far as its possible to go south here, and for lee to dip a finger in the Beagle channel in homage to Darwin and his adventure so many years before 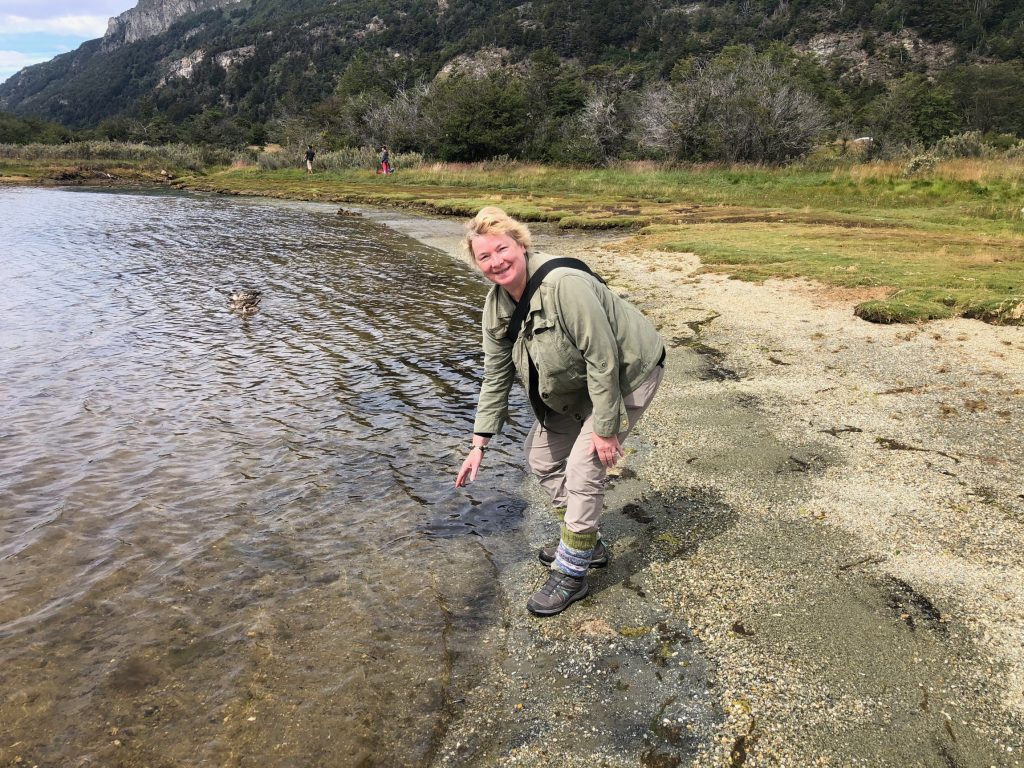 Later that same day we took advantage of the still waters to take a boat trip on the channel and see some cormorants, seals and perhaps an albatross (or at least a very big bird that we think might be an albatross) 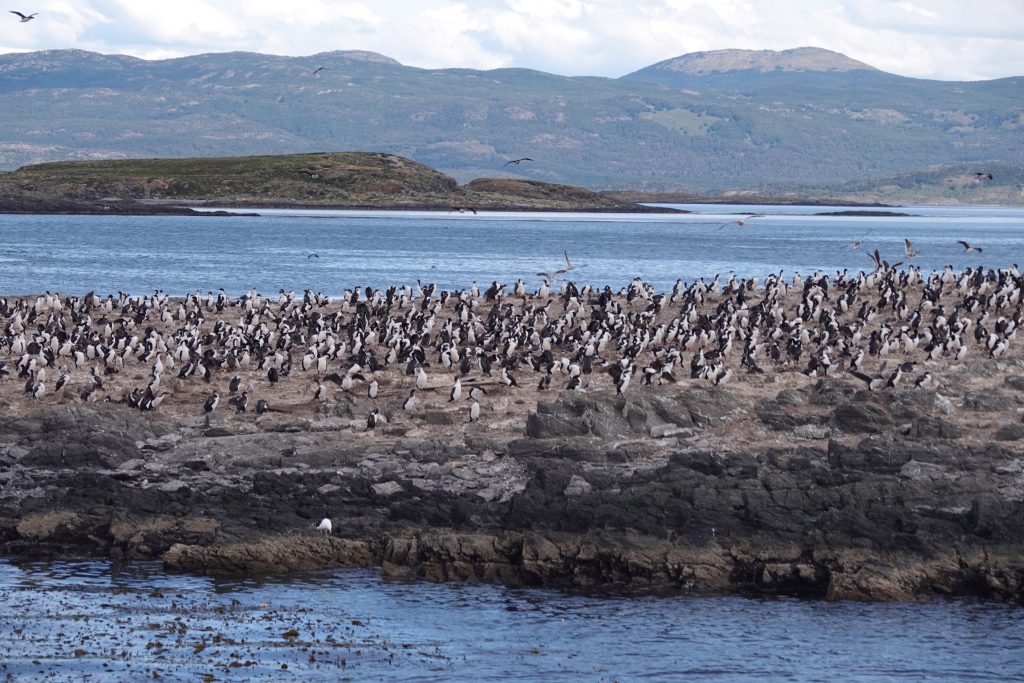 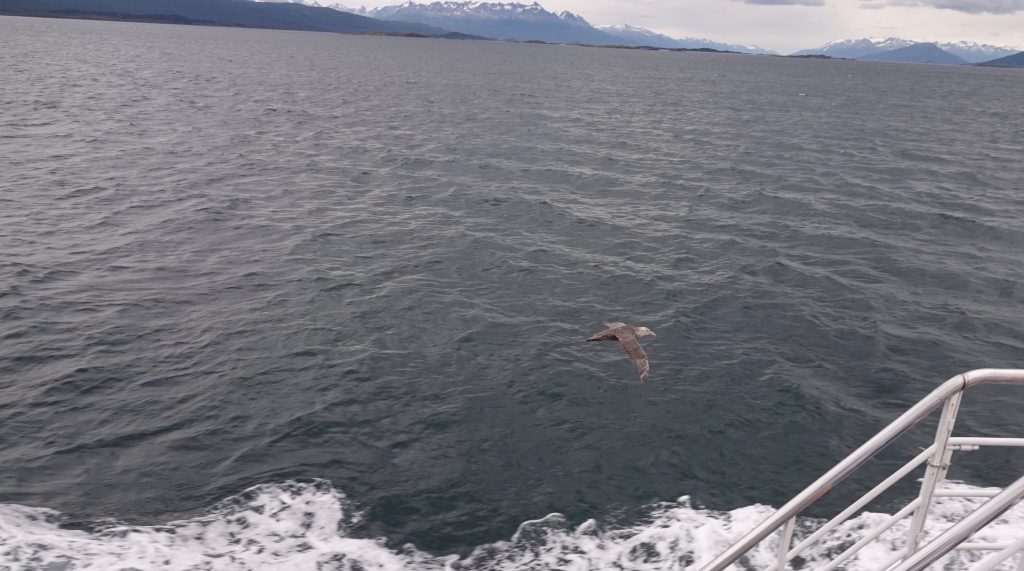 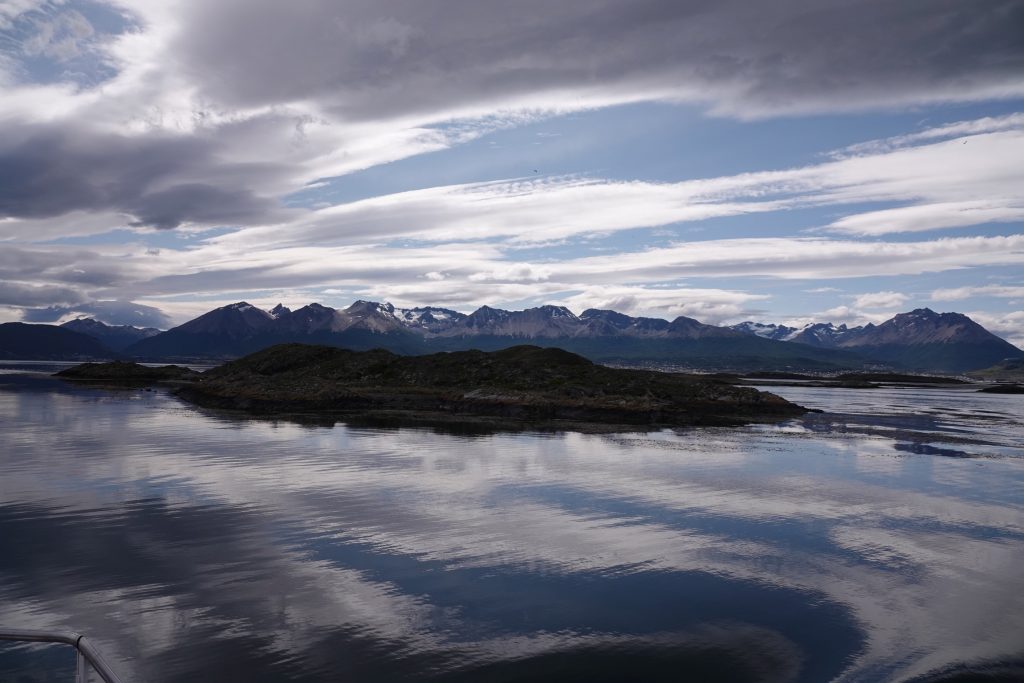 As usual the pictures do not really so justice to the scene (I need to learn how to take better pictures really) but hopefully these give some idea of the mirror conditions and the striking cloud cover overshadowing the snow covered peaks of the island.

Once we got back to the shore we had a treat in store as our friends Andy and Susan had just docked on the last day of their Antarctic cruise in the beautiful and very capable Scenic Eclipse a nearly new ice capable boat with lots of toys (helicopter, submarine etc) so they had been enjoying the top end version of touring in this part of the world.  It was funny to see the battered campers of the overlanders lined up in the carpark overlooking the sleek lines of their ship. 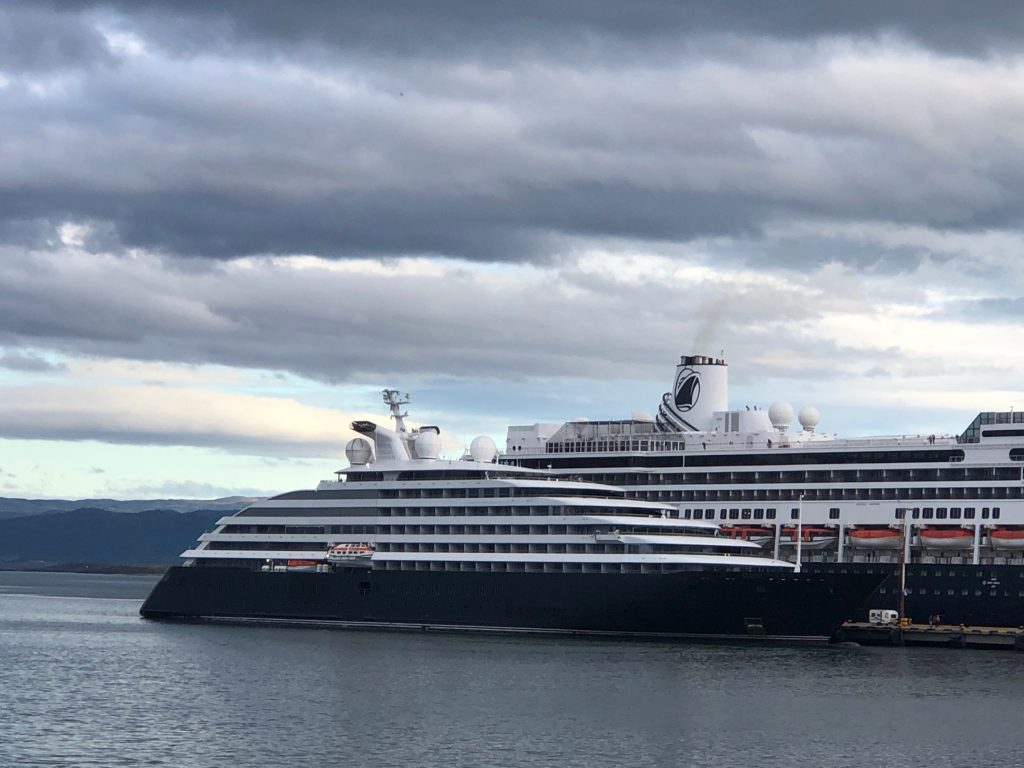 Andy and Susan had kindly organised for us to come on board for a tour, this was great for Lee who would like one day to do a cruise in the Antarctic but we could not fit it into the time she had available this trip, next time.  The ship was lovely and the drinkers celebrated with pink Champagne in the stylish bar (they have magnets on the bottom of the whisky bottles in the collection) it was lovely to see them as they set off for the whistle stop tour version of our trip in South America by plane and nice hotel ! 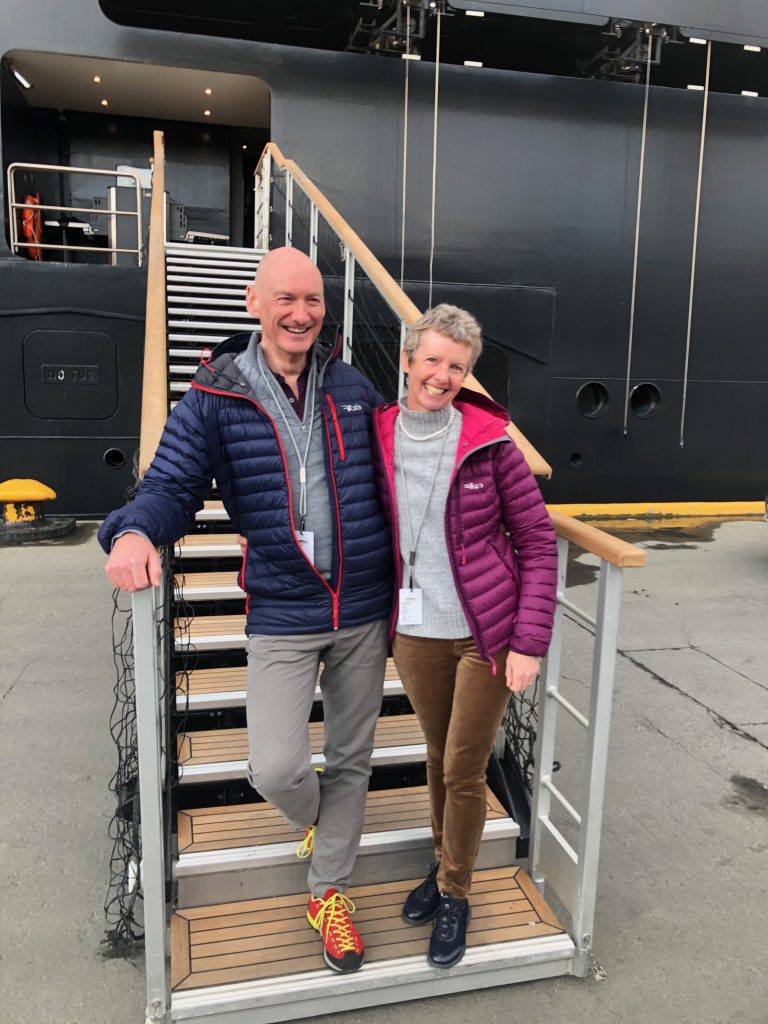 Although they are on the luxury version of this trip Andy is no stranger to expeditions having kayaked around Tasmania among other adventures since leaving Gore and we had hoped he could join Nelson as crew but could not quite get the dates to work.

So finally and sadly Lee is on her way back to Edinburgh to spread some TLC among the family and animals, we had a lovely trip together for five weeks and the great sunrise was a good final send off for her 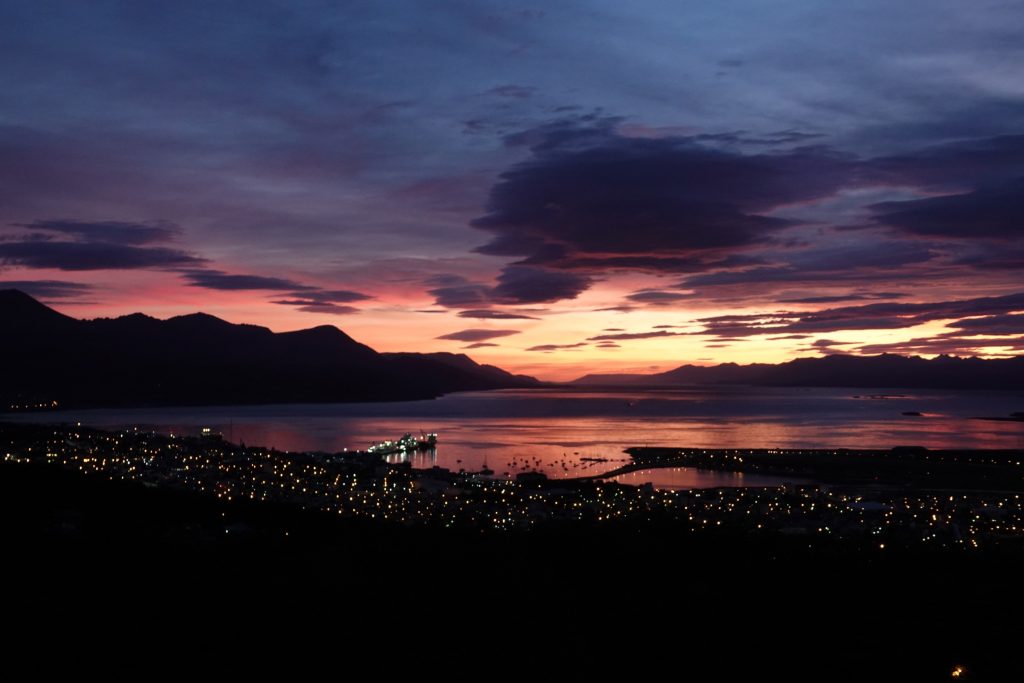 So now Tony is in the passenger seat and we are off to Chile for a few days back along the route that Lee and I took as the Torres, Fitzroy and Moreno stops are much more interesting than the coast road on the east side of the country so once again and for the last time on this trip I am back in Chile.  This time they took my eggs, having not had a problem with them on any other border crossing into Chile but at least that was all. 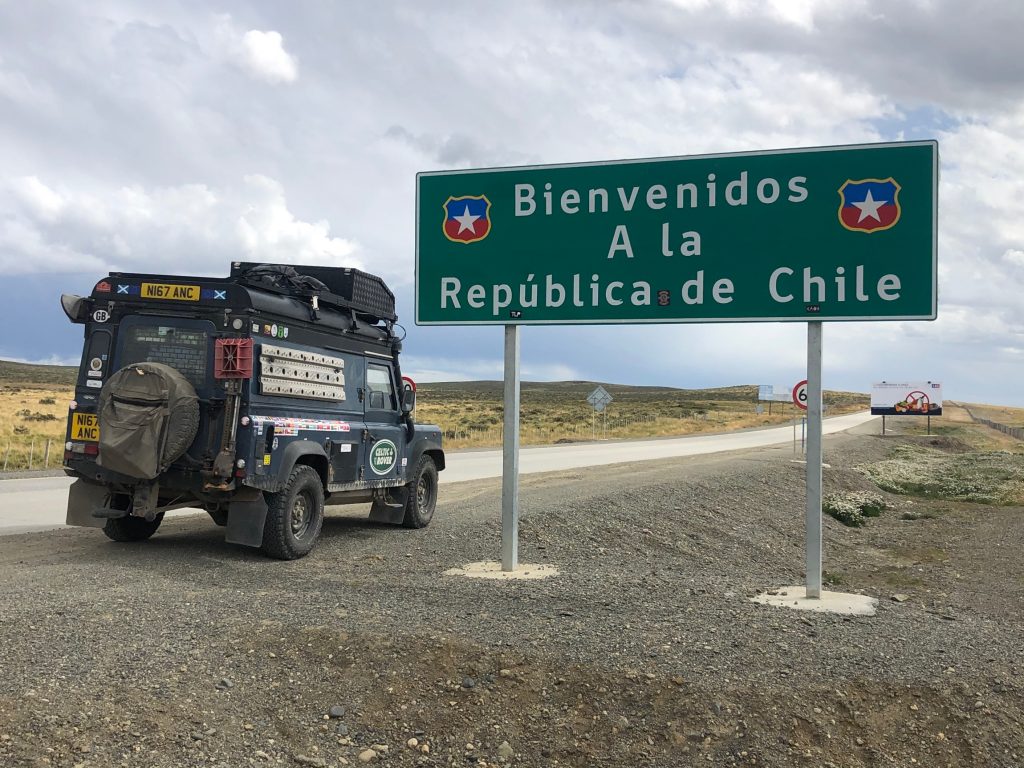 I have decided not to join Tony in climbing up the Torres again, so I was smugly in my sleeping bag as he set off at 6am and have enjoyed decent coffee, music and internet while waiting and catching up with my blogs in the cafe overlooking the mountains!

Previous Land Rover Mary Poppins
Next All Change in a week….