The Great Salars of Bolivia

After the stress of the oil flange falling apart, and the amazing recovery thanks to the mechanics in Arica, we took it easy for a day cruising down the PanAmerican highway rather than heading to the mountains, at each stop I fussed over the car checking for leaks measuring oil and coolant levels and generally being a bit paranoid !  The fix the guys had put together was very unorthodox and I was still worried that as the engine got hot or through vibration that the seal would fail – so far no damage had been done to the engine as we had stopped before losing so much oil that the pressure dropped but I was constantly checking the pressure as we went down the highway and checking for leaks at every stop.

Our next destination was the great salt flats, or Salars, of Bolivia.  This meant a climb of 4000m or more from the coast and we would be quite remote from garages and recovery if something did go wrong.  I also had to think about Mark as he had been at sea level so we needed to choose a route to the border which allowed him at least one night to acclimatise with the help of the diamox which I had shared with him.  So we found ourselves in a lovely wild camp just short of the border with Bolivia at 3000m and considered that enough for one days ascent for both Mark and the car. 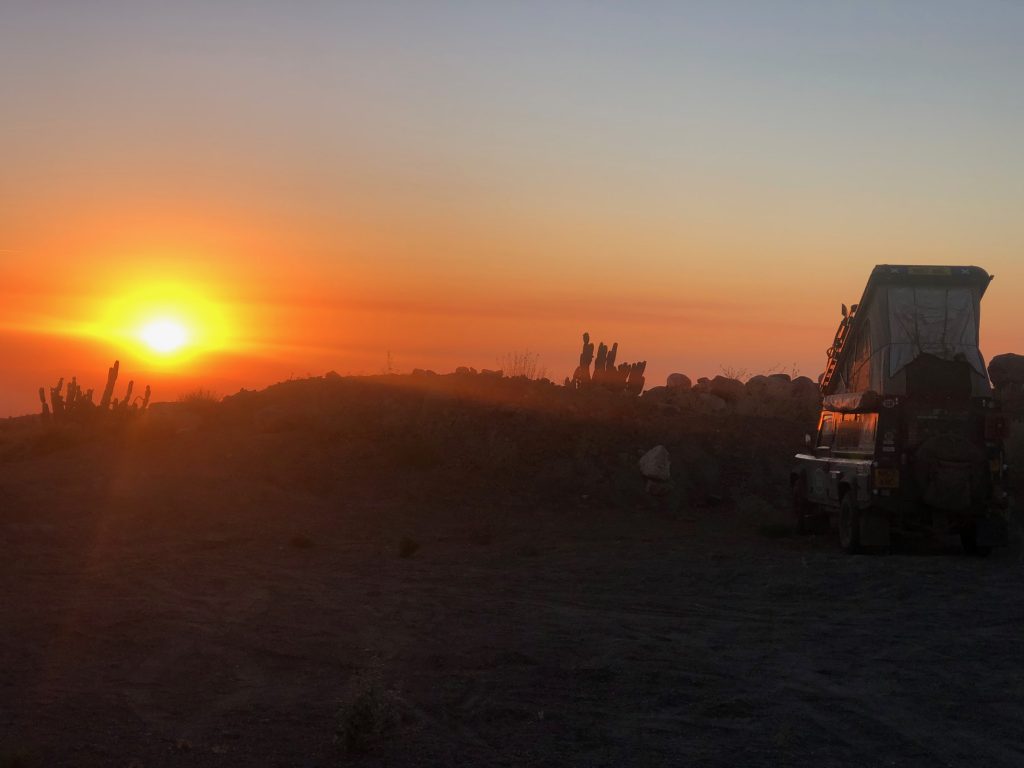 Mark was getting a good introduction to wild Camping as we had a clear sky and a lovely sunset, which at that height means a cold night, a bit of a shock as we had just come up from T-shirt weather on the coast a few hours before.  The car did well a bit of an overpressure on the water system due to the altitude change and the heat of the climb caused a small leak which I could fix easily.  We also did well with the Altitude both having a decent sleep probably partly due to the relief from the stress of the breakdown over the previous days as well.

The next day we headed to Bolivia, a simple border crossing with the usual formalities and we were on the edge of the first of the great salt lakes, in this case we buy passed it as we guessed it was a two day crossing, the guide books said it was not much travelled and we were in the beginning of the rainy season and alone – just after a major repair, so I chose to drive round on the normal road to the bigger, but more popular Salar at Uyuni 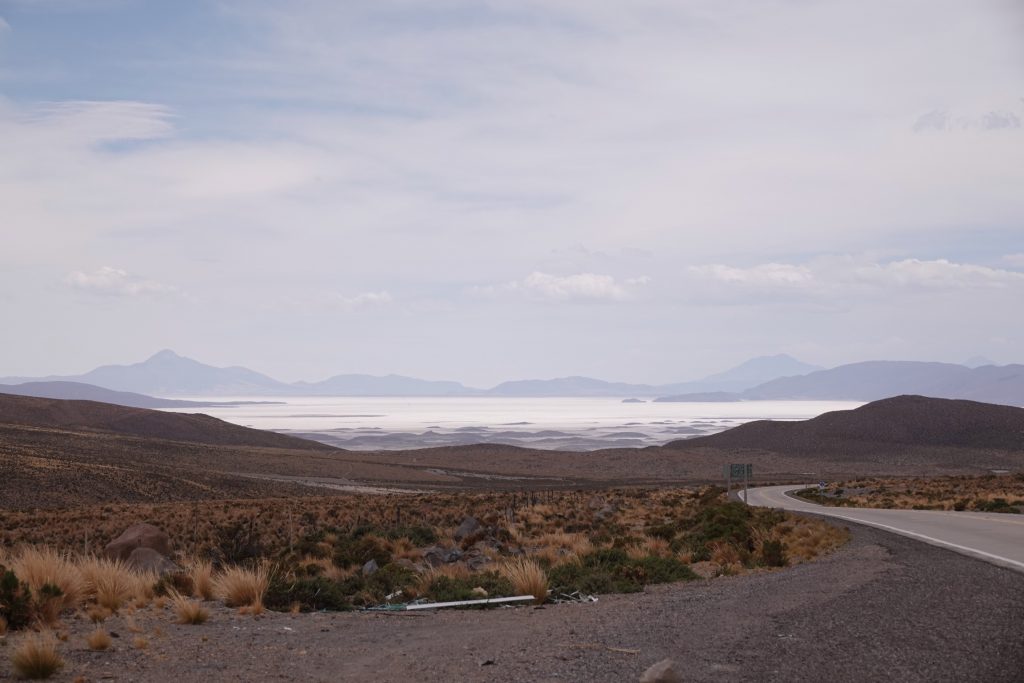 The one that got away, Salar Coipasa, discretion proved to be the decision as the rain started we knew this one was a multi-vehicle, multi-day expedition not for us, alone, with no local knowledge just after a major breakdown…

We headed on to the main Salar de Uyuni and camped on the shore of the salt plain for the night, even on the good roads it took us all day to drive down to the entrance and a small village where we could get more diesel for the long Lagunas route after the main Salar.  Thankfully Nelsons extra diesel tank gives us the range that is needed for this two day trip, many other folks have to carry fuel in tanks to manage the trip. 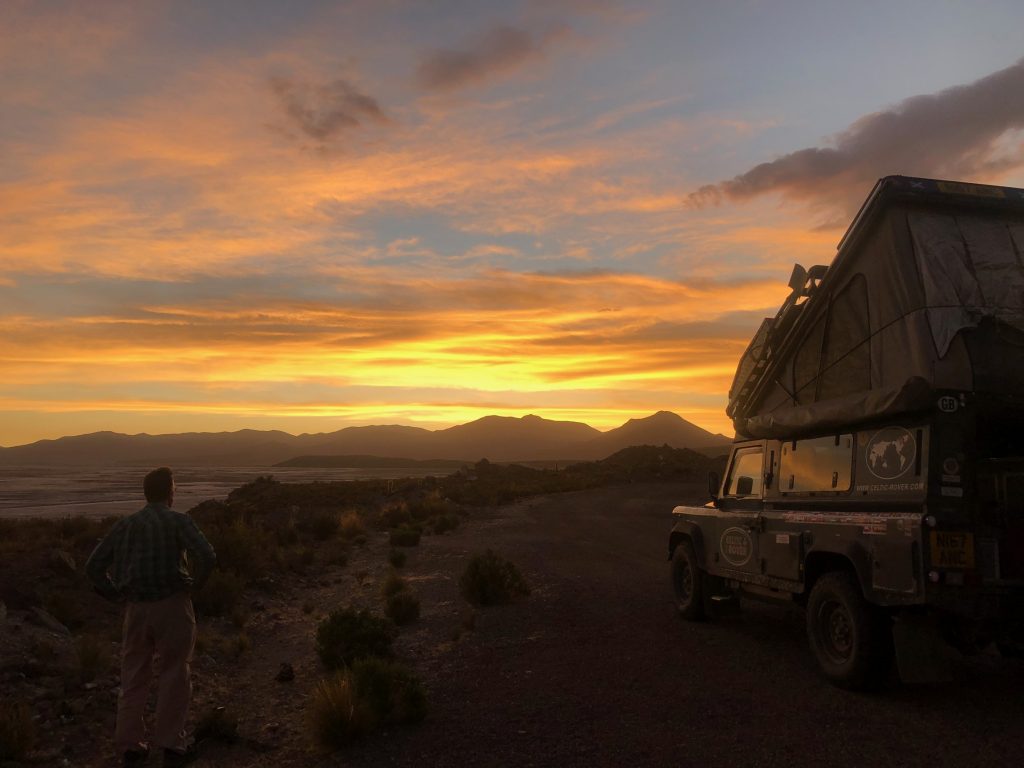 Once again we were treated to a great sunset as we heated up our camp rations (no fresh food allowed through the border  and no shops on the way), the edge of the Salar is on the left of this picture and would be our destination for the next full day.

The great Salar of Uyuni was every bit as spectacular as I had hoped, often when one sees sights that you have been looking forward to there is an edge of disappointment, usually as you have only seen photoshopped images taken from just the right angle and the reality is spoiled by development, rubbish or crowds of tourists…no so here.  The salar was pristine, beautiful and empty, it was amazingly big we drove for about 70km across it and we only saw a few other cars in the distance or at the central island were the paths cross. 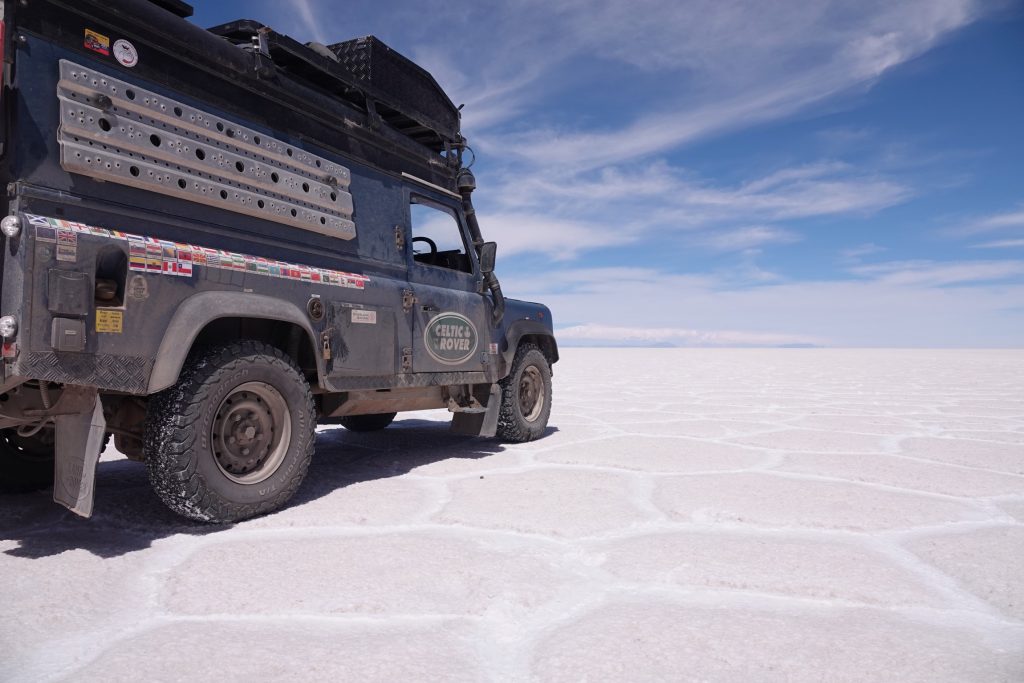 The salar is made up of these hexagonal blocks formed when the surface water evaporates, it was just on the edge of the rainy season when all this will be renewed for the next year in pristine whiteness 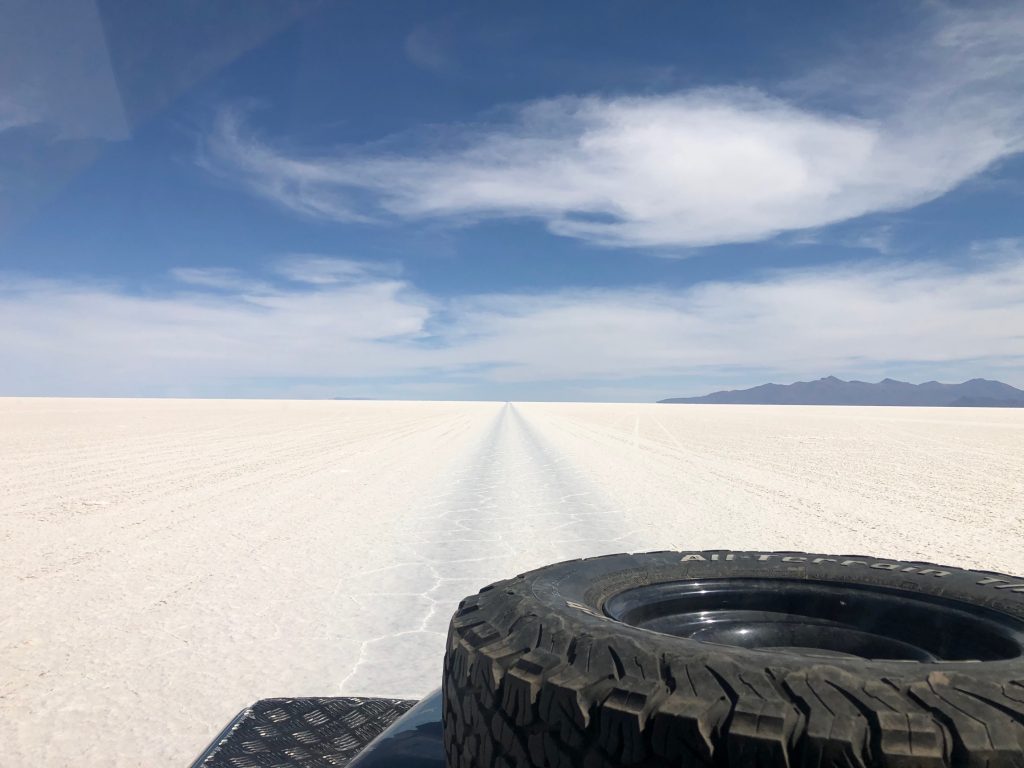 Navigation was pretty easy given the tracks in the salt and our high resolution navigation systems but the roads went on for hours of driving flat and smooth. 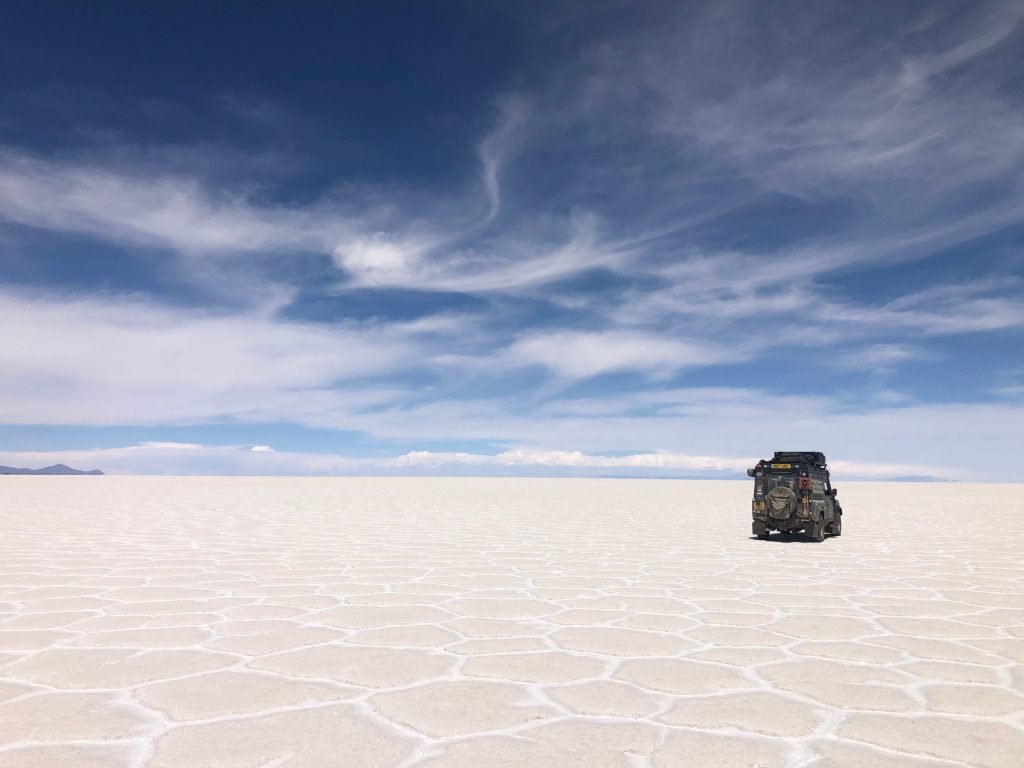 There really was no one else around for most of the day, and this image has not been enhanced in any way this is actually what it looks like not a photoshop version! 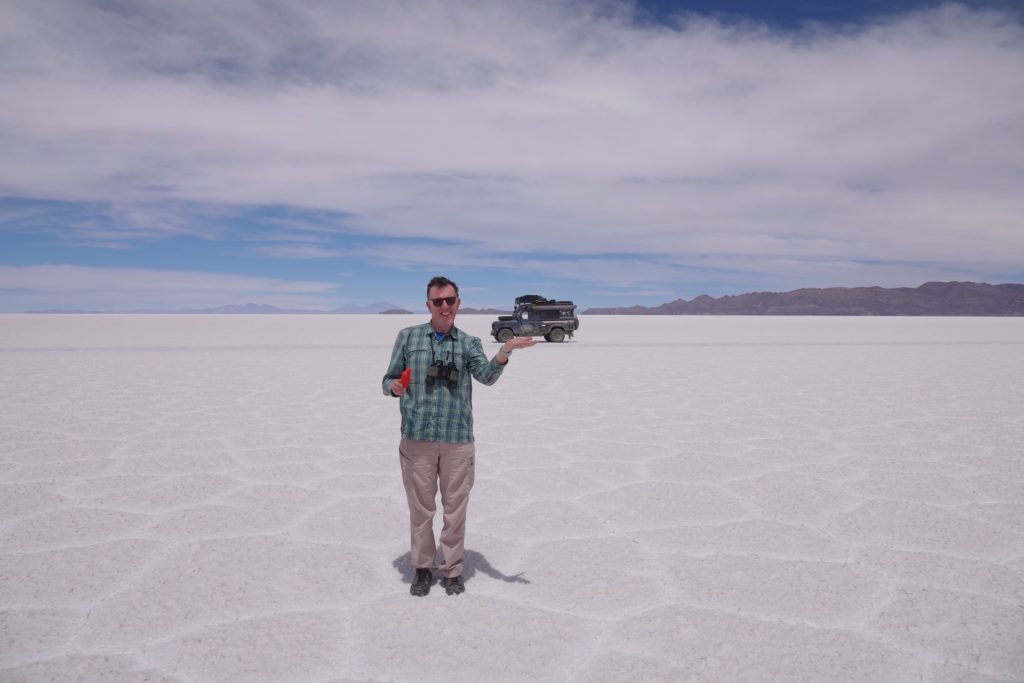 We did not quite get the classic picture right here, I think Mark was not quite sure why he was putting his hand out as I asked him to raise and lower it, he needed to be a bit closer really.

For most of the day we were able to scoot around the lake visiting various islands and taking pictures but as we approached each island and when we entered the Salar I had in the back of my mind that it had been raining for a few days and I had read stories of water running off the land into the salt and causing the crust to break, under the crust is brine and mud so if you “go in” and break the surface it can be a big issue to get yourself out specially if you do not have another vehicle with you.  So I was very cautious of the shoreline I think perhaps to Marks amusement as he jumped up and down on the hard salt.

As we went to leave the Salar we headed to the south coast and the main causeway that leads on to the salt, the causeways are built to bridge the soft part of the salt at the shore in the rainy season and we could see some standing water near the shore as we approached.  Suddenly I could see the salt went very slushy just in front of us, I shouted a warning to Mark who was driving,  and the left rear tyre sank about three or four inches as we broke through the surface.  Thankfully the tyres had been deflated before we went onto the salt and the trucks four wheel drive to other three wheels pulled us out, I “encouraged” Mark to keep up the momentum as I knew if we stopped we would be stuck for sure, we have no pictures of the next five minutes as we dared not stop and bounced through drifts of wet salt trying to keep up momentum to avoid breaking the fragile crust, it was a fine balance of momentum being our friend and picking the right track, by the end Mark was white faced and white knuckled as we hit the causeway and bounced up to the friendly stone surface through puddles of water and wet salt.

So in the end a really special day, wonderful natural sights and a bit of heart stopping technical stuff where Nelson once again, properly set up, proved his immense capability in tricky situations….

Previous Nelson down…and rises again
Next The Lagunas route, across the sky to Chile from Bolivia