The Lagunas route, across the sky to Chile from Bolivia

I was delighted by our day on the Great Salar of Uyuni, it had met all my hopes and aspirations and the sticky bit at the end gave us just enough excitement to make it a grand adventure, a few mph slower or not running low tyre pressures and we would probably still be digging ourselves out of the slush meter by meter so we were well relieved.  Cleaning the salt off  on a ramp gave me a good chance to check all the engine oil system and steering ball repaired seals and all was good so I had a greatly increased confidence that Nelson was, at least for now, fixed enough to try some more adventuring.

It is possible to drive from the Salar directly on tarmac roads to our next destination the desert Oasis of San Pedro de Altacama but it is also possible to take a rough and unsurfaced high altitude road across the Andes which passes many mineral infused lagunas (lakes) of different colours and 6000m mountains on roads that rise to nearly 5000m.  I had been told it was a two day off road challenging route, so it had to be done.

As we headed away from the salt pans we had a full load of diesel for the long journey across the mountains (there are no villages, fuel or food available up there) I was struck how much the landscape reminded me of the high plain of Mongolia with the same random selection of rough track between A and B 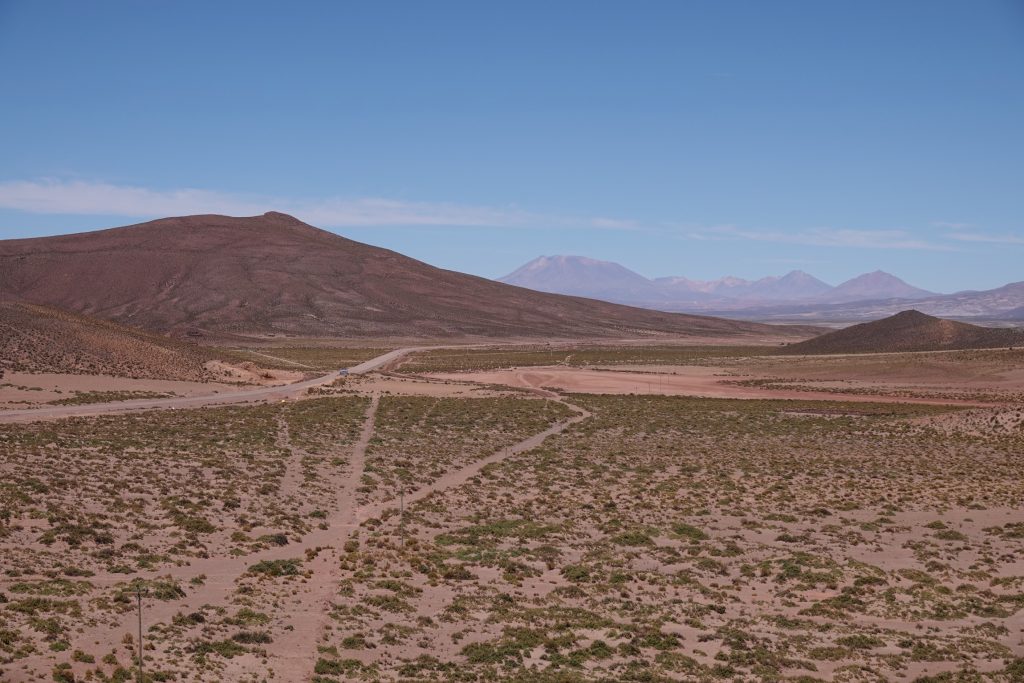 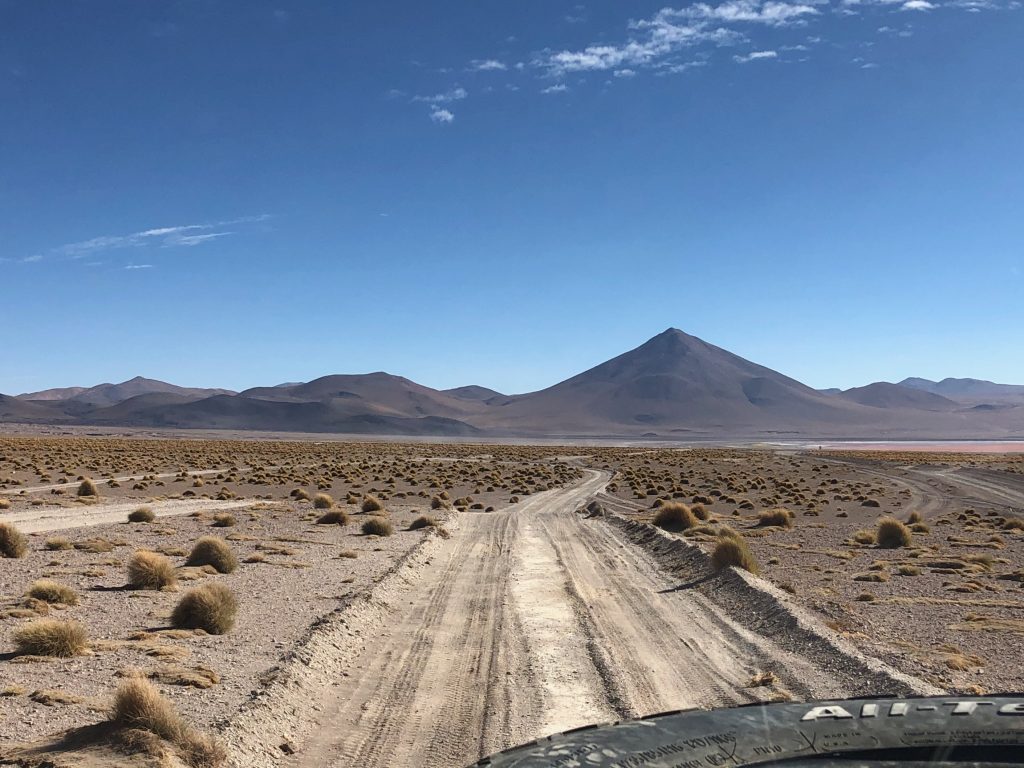 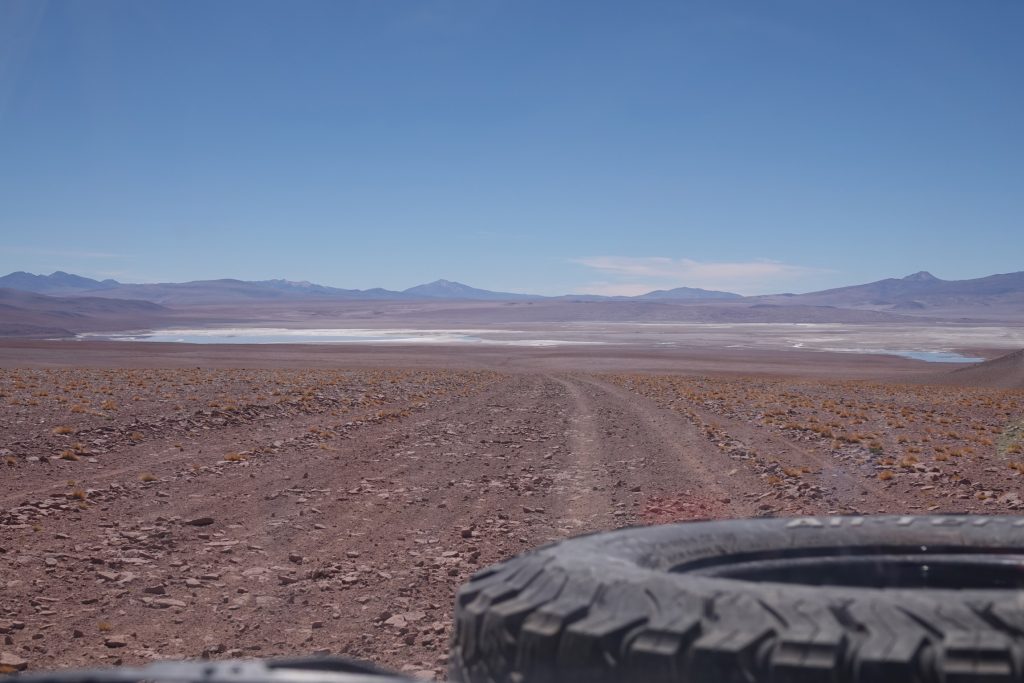 As we went along the horizon was dotted with volcanos and mountains of different colours depending on the composition of the minerals, with so little rainfall these deposits are not washed away as they would be in other places and stay as splashes of colour on the mountains 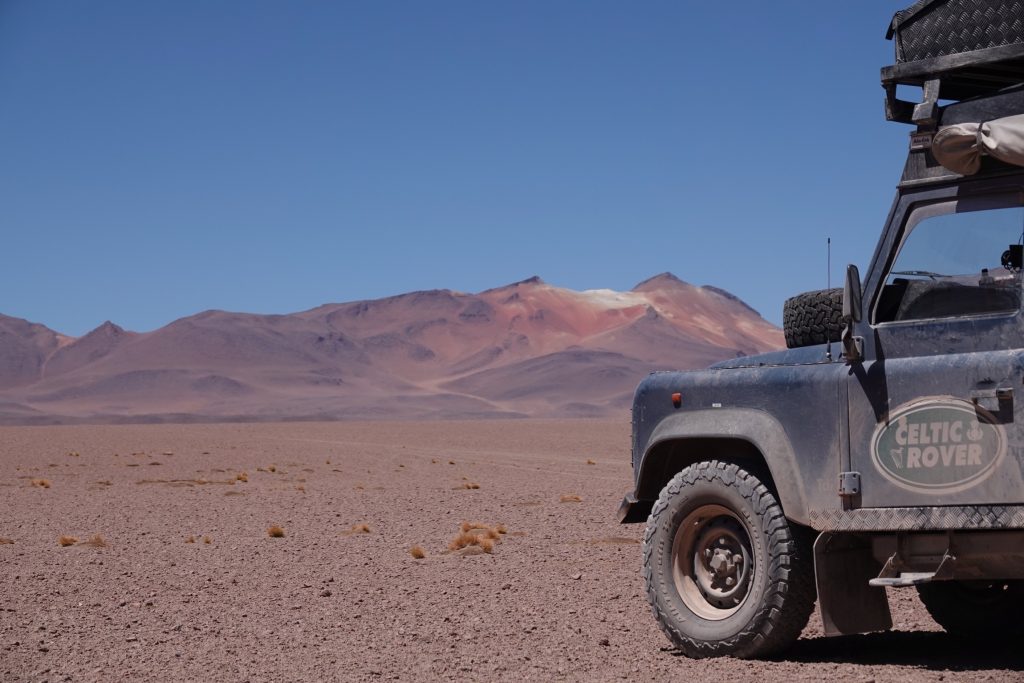 There is not a lot of wildlife up there, in fact it is a bleak place were very few plants can grow but we did see a lot of different types of flamingos (I had not realised there are so many different types) 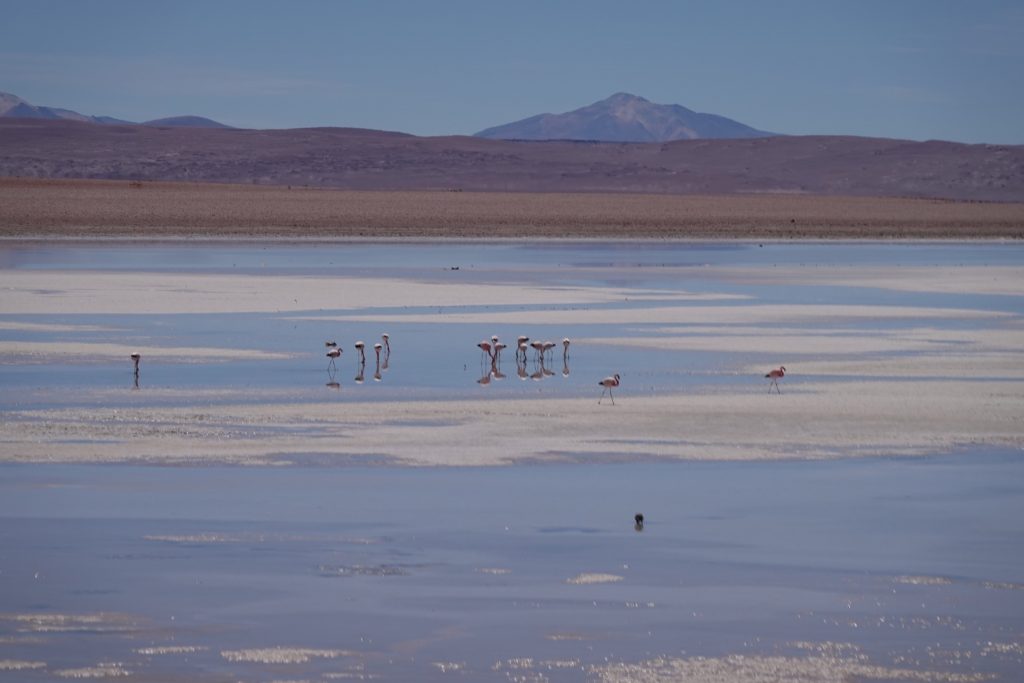 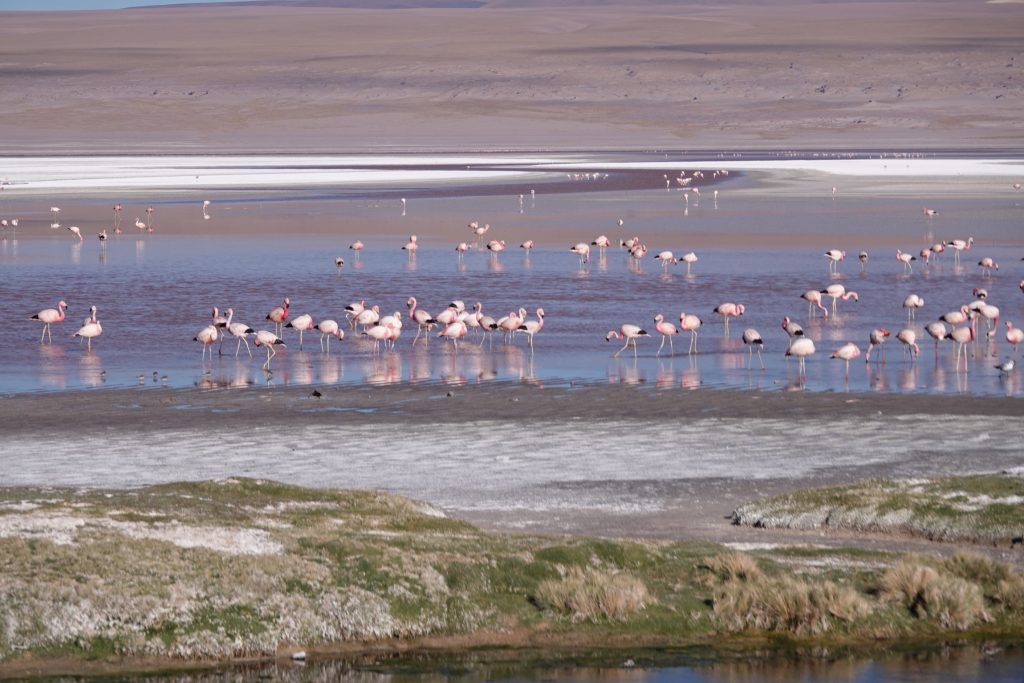 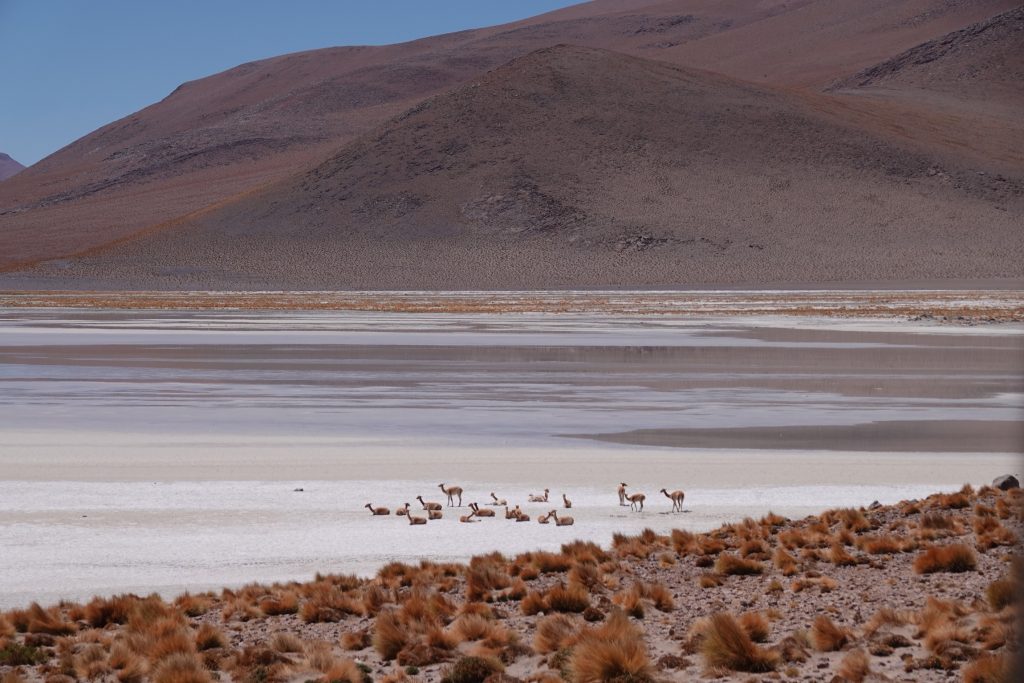 On the route navigation was a challenge, the passenger had to continually help to guide the driver on to the right course as there were so many faint tracks going in different directions we had to keep the car close to the map target route while trying to avoid the worst of the washboard that was shaking out our fillings and not doing the car any good at all. 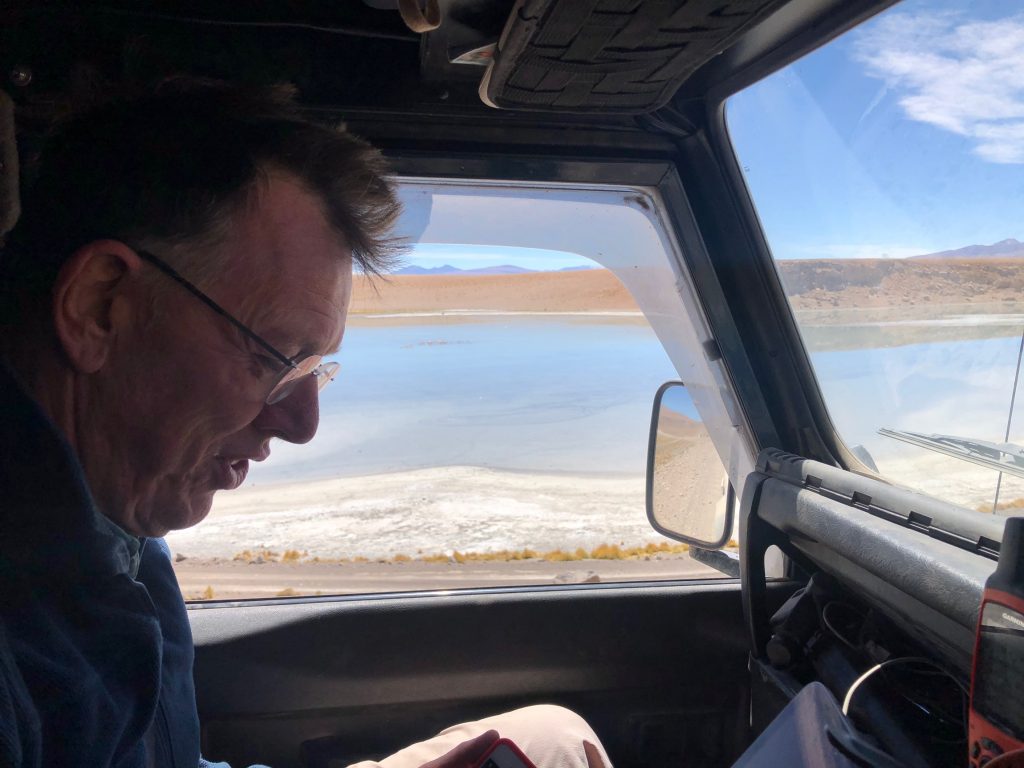 What is not obvious from the pictures is the cold and the wind at that altitude (we got to 4912m on the tracks) so although the views from the car were really spectacular and different, specially as we got higher and it was less like Mongolia and more like one would imagine the surface of a planet or a moon, getting out of the car was a challenge as the wind and the cold cut through us and sent us scurrying (breathless) back into the car for a respite. 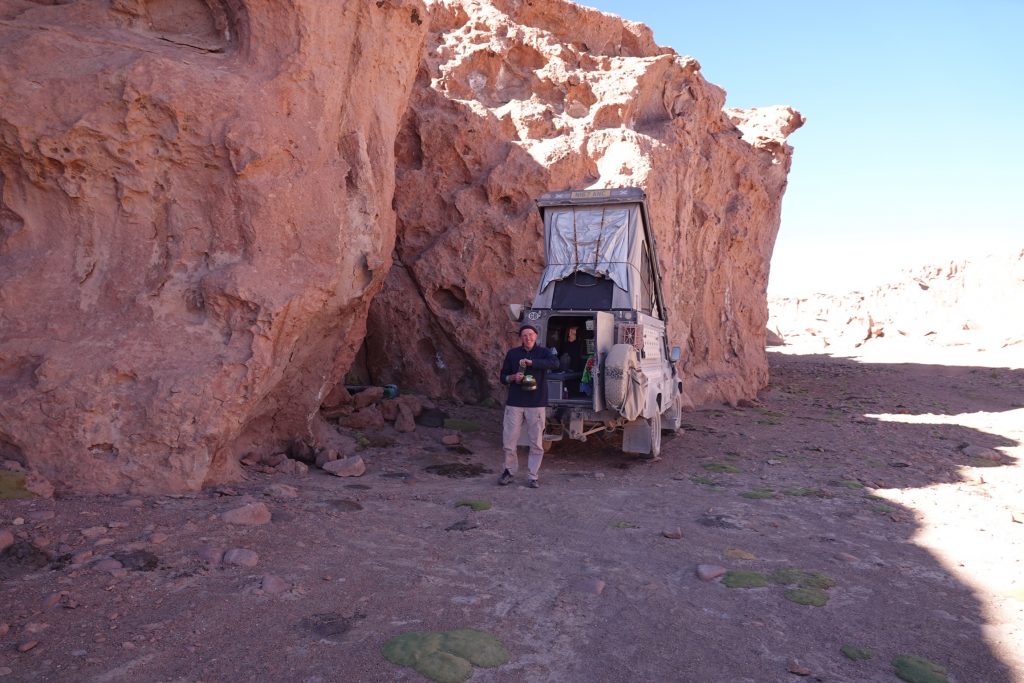 In this case some of the great advantages of Nelson over some other land rovers, for instance with roof top tents, come to the fore.  We were able to pop the roof and put in the extra insulation sides I had made up in Scotland and then turn on the heater, it has been adjusted to enable it to work at high altitude so we were cosy, then the single gas burner is enough to enable us to heat a pan of water to hydrate our ration packs without going outside so we could sit inside as the wind howled outside reasonably warm and comfortable until it was time to go to bed.  Saved programs on iplayer gave us a little break before sleeping and headphones allowed us both to enjoy different programs.

The final key innovation is the use of the “pee bottle” we have one each and two independent sleeping areas so if there is a need in the night there is no need to go outside and all the heat of the car can be retained, this is important when its -5 oC or so outside.  Usually my guests hold on for a few days before using it once they do they never look back, I have no choice really as small residual damage from my chemotherapy means I do need to pee once or twice a night so for me its is a great innovation !  Another important overlanding skill is being able to use a trowel for any other business that is necessary, once you get used to it it means you can wild camp in complete wilderness without fear.

Anyway that night it was really cold and windy, we were in our fully closed sleeping bags with base layers, wolley hat and hoods up to keep warm, in the morning we could turn on the heater and restore some heat to the car before having to get out of the sleeping bags and breakfast was for sure hot coffee and porridge inside the truck.  Inside the truck I have a 5l container of water for this situation as the cold froze the normal tap and sink water system so we had enough for coffee etc to get us going.

The next day we continued through the lunar landscape until we came to the border with Chile past colourful lakes in some cases naturally poisioned with the minerals that leach slowely from the deposits in the mountains. 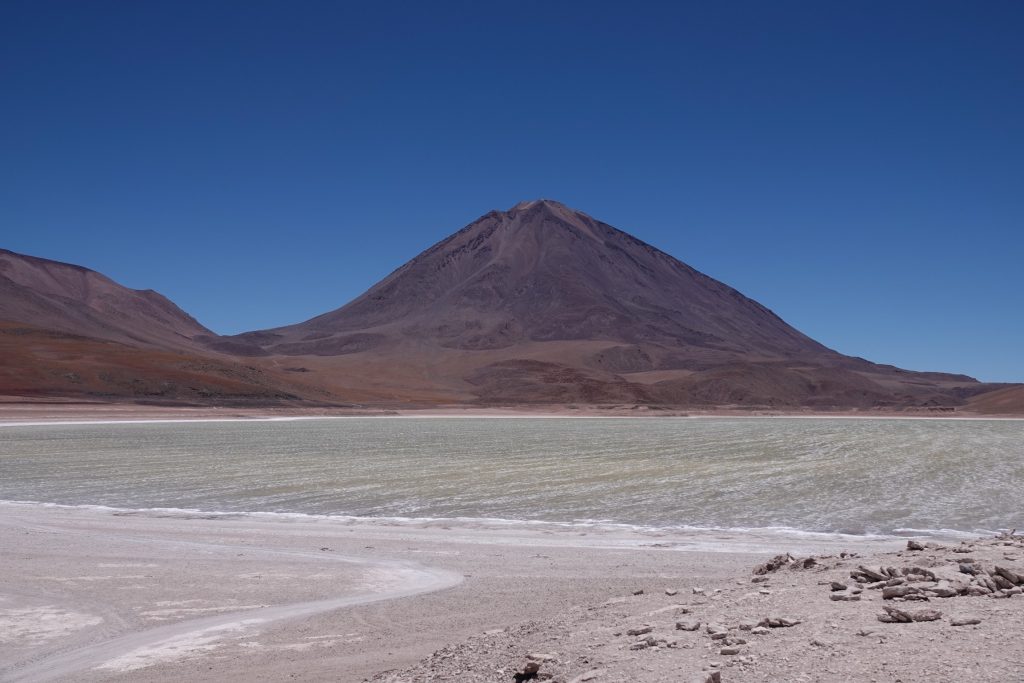 In this case laguna verde is properly named as the ” green lake” poisoned  naturally by arsenic apparently, you can see the waves caused by the wild wind at this point 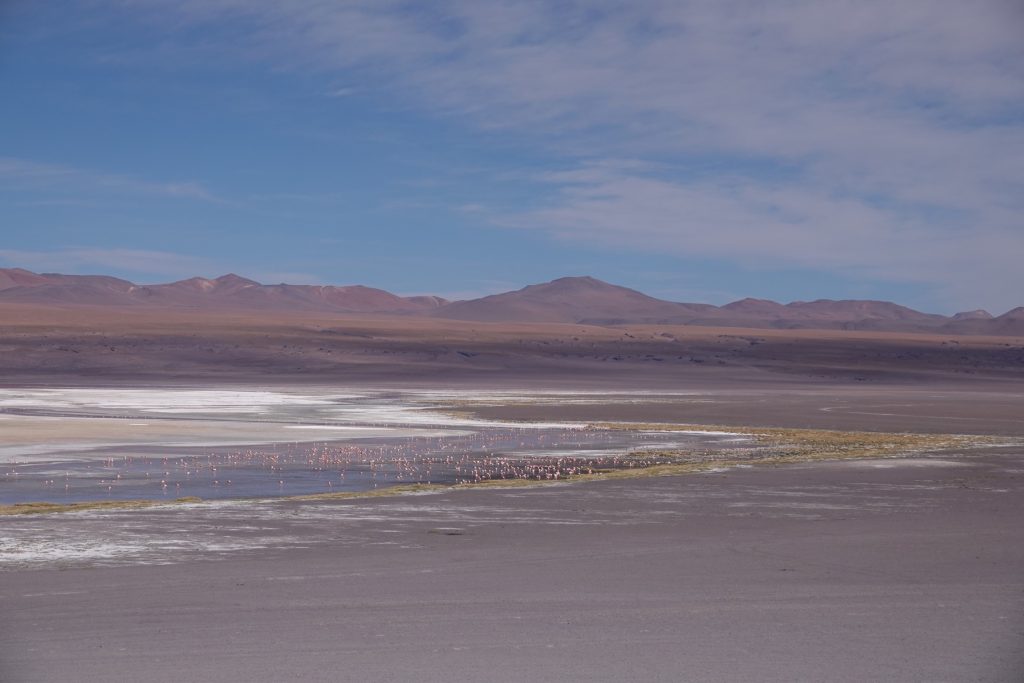 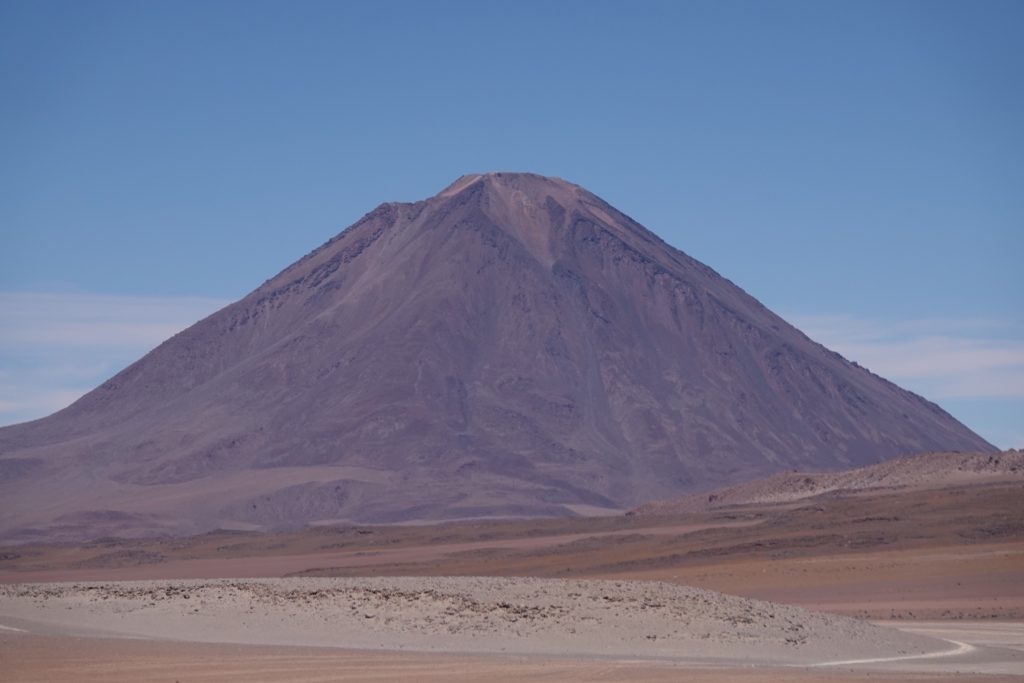 On the border with Chile is this nearly perfect conical volcano the border post is just to the left of the volcano, a pretty horrible desolate place to have to work, the staff told us that they only have to work there for a few weeks in the year as they rotate it.

Once in to Chile we coasted downhill to the lovely little town of San Pedro de Atacama, it is a backpackers haven and full of tour operators, souvenir shops, coffee places and restaurants, normally the type of place I would have little time for as I like to experience the “real” country I travel through, but after the breakdown, camping in town squares, outside police stations, in canyons and gruelling days on rough roads I was really ready for a few days break, some nice food, hot showers and good coffee – all of which we have found here in our two day break from “proper adventuring”.  Everything in life needs a bit of balance from time to time ….. 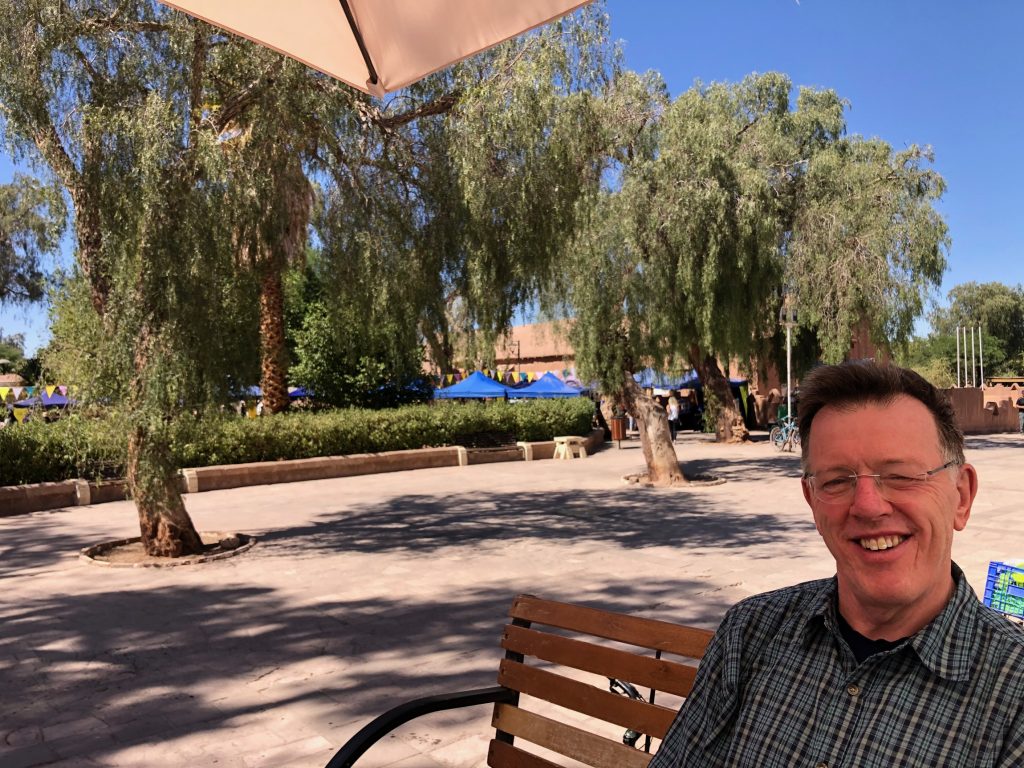 First priority was a nice breakfast, made for us, on the square at 220C, short sleeved shirts, sun hats and big smiles the order of the day (once we actually got up around 9.30am)

Nelson had a long list of minor repairs and about a ton of dry dust had to be cleared from every surface while the local laundry worked on our big bag of clothes.

So while Mark has cycled the valley of the moon I have caught up with my backlog, somehow I need to fit in blogs (which are for me the lasting record of the trip which might make it into book form at some point in the future) ordering spare parts, video chats with Lee and family and all the admin stuff (like ordering spare parts) that creep up on you.

We are now refreshed and ready tomorrow to tackle the challenges of Argentina …..