Crossing the high Puna to Salta

The Puna is the local name for the very high altitude plain that is divided between Bolivia, Chile and Argentina, in fact this area has been the subject of a number of historical wars between these three countries principally for its mineral wealth as nothing much can grow at 4000m and there is more salt than water.  Previously we had spent some amazing days in the Puna and the salt plains of Bolivia before heading down into the Atacama desert to the lovely little town of San Pedro de Atacama were we took a day off and got warmed up, cleaned up and stocked up on good food and coffee ready to start the next phase of the adventure – back up to the Puna, this time from San Pedro to Argentina, which meant a long slog up from 2500m to nearly 5000m in a day.

Thankfully we had both acclimatised to the heights so we would be OK, and we have over the last year learned how to drive Nelson up big hills and altitude, this involves stopping to let everything cool down and depressurise every 1000m or so (including remembering to depressurise the petrol stove so it does not spray everywhere) and driving in the engine sweet spot (2500rpm and half a bar boost).  Some of my friends had suggested fitting a sensor on the exhaust gas and we also keep this under 650C so what ever speed meets these requirements is the speed that we go along at – which sometimes means 30km/hr and second gear if necessary and just “grind it out”.  All this has been learnt at the expense of the last engine which blew up after my trip to the Pamir and Karakoram highways on the “Roof of the World” tour, I have found in South America that they have roads here even higher than those roads but I guess no one has told their tourist boards which still claim the roads in Asia as the highest when they are clearly no longer so.

Anyway off we set chugging up the mountains to back up to 4000m and the wind, cold and desolate beauty of the Puna 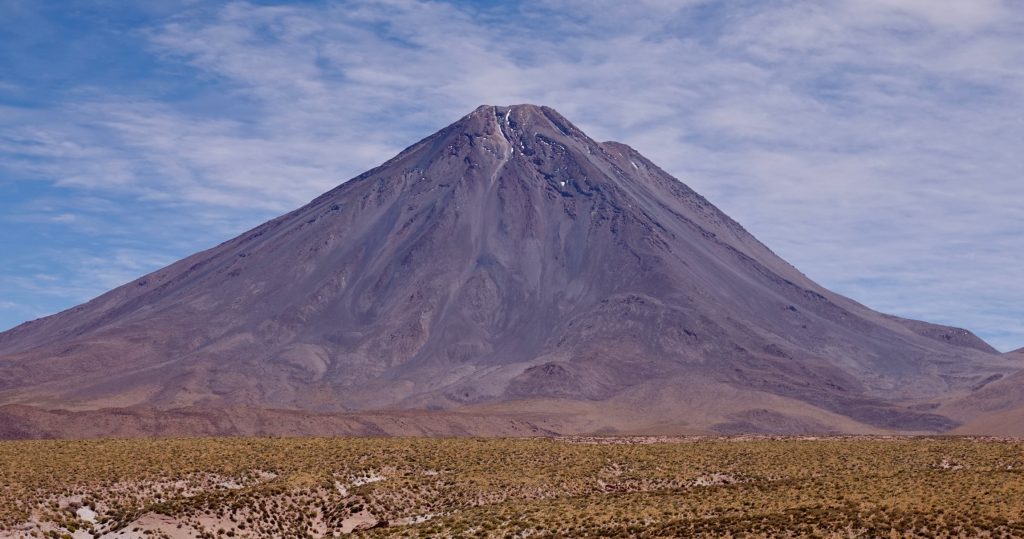 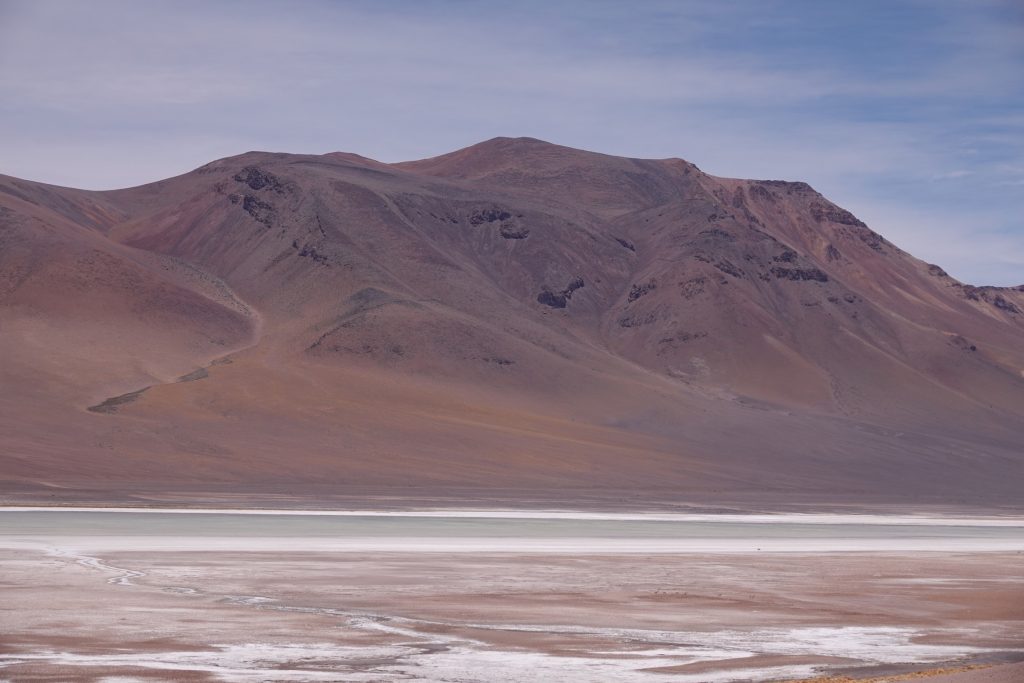 At this time of year there has been a little rain so there are pools of deep blue water in some parts of the salt flats and expanses of wide blue sky in all directions, the mountains are all very high above sea level, around 6000m but as the base level of the salt flats is around 4000m they seem quite small on the horizon and the main impression is of the desolation and lack of life across the wide plains. 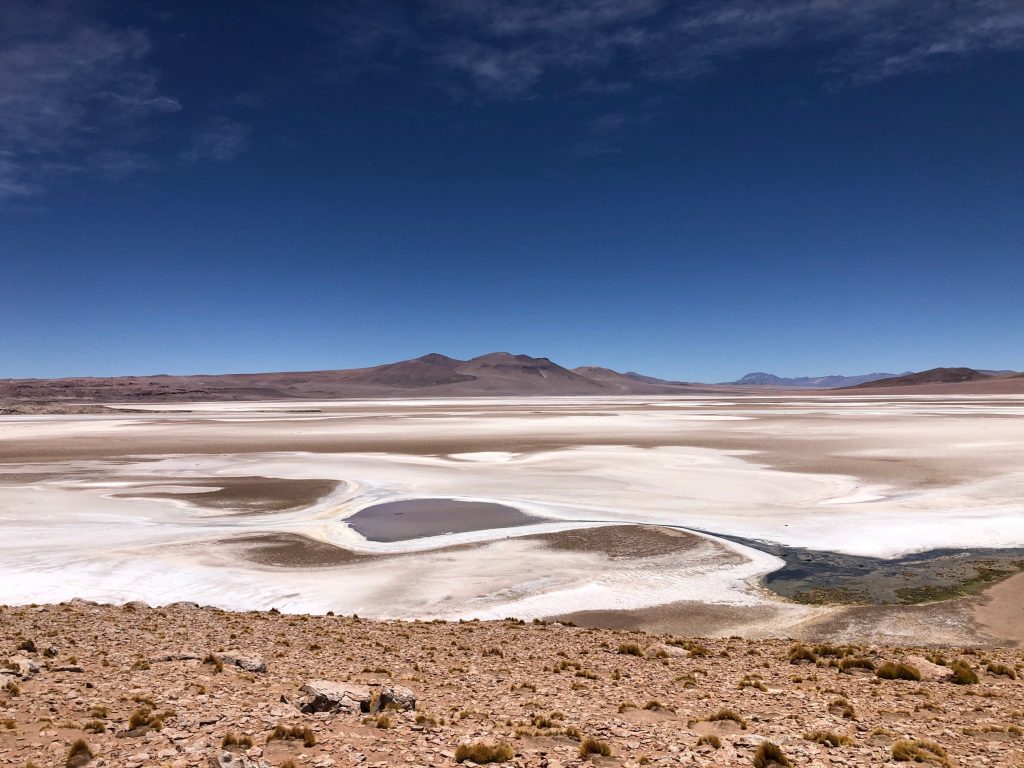 As we cross into Argentina we face two more high ridges so we drop down to 3000m and chug back up to over 4000m twice in one day but on lovely roads, very much better than the roads we faced on the lagunas route in Boliva and Nelson seems quite happy to potter up and coast down the mountain ranges.  We feel once again that we are driving on the roof of the world. 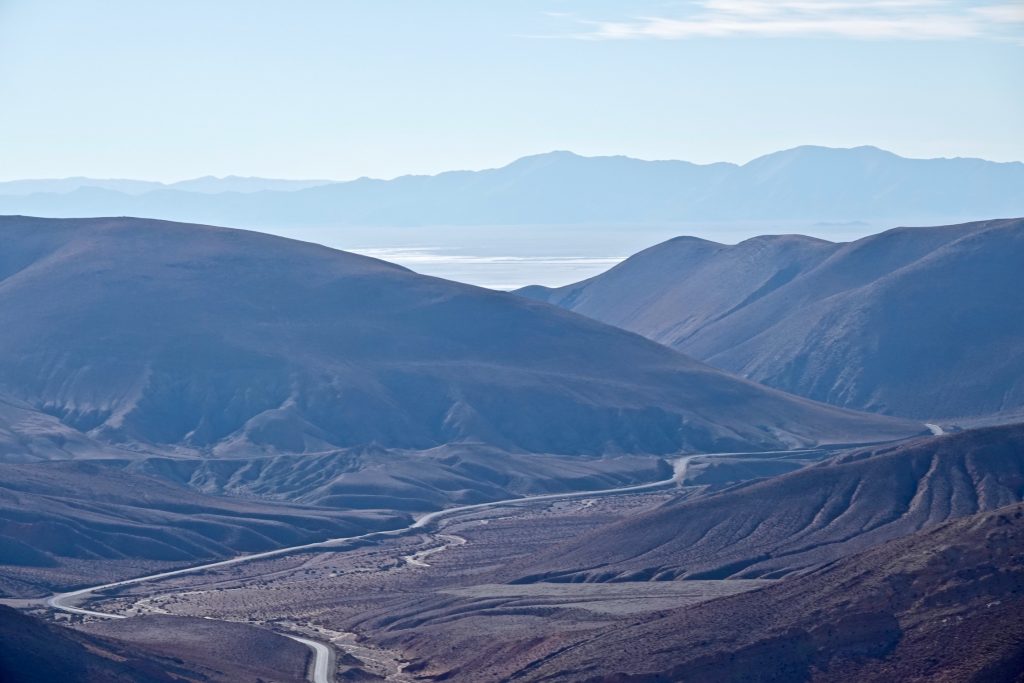 Here you can see the lovely Argentinian road snaking down the valley from the border post and the salt lake in the distance we still have to cross, our destination for the night is Punamarca which is still some 250km away on the other side of the far mountain range.

As we cross the last set of mountains we are once again surprised by a new sight, in this case some startling erosion patterns and bands of colourful rock both caused by the low rainfall and high mineral content of the soil.  The coloured hills of Punamarca are the beginnings of the Georges or Quedebras that will be a big feature of our next few days in Northern Argentina 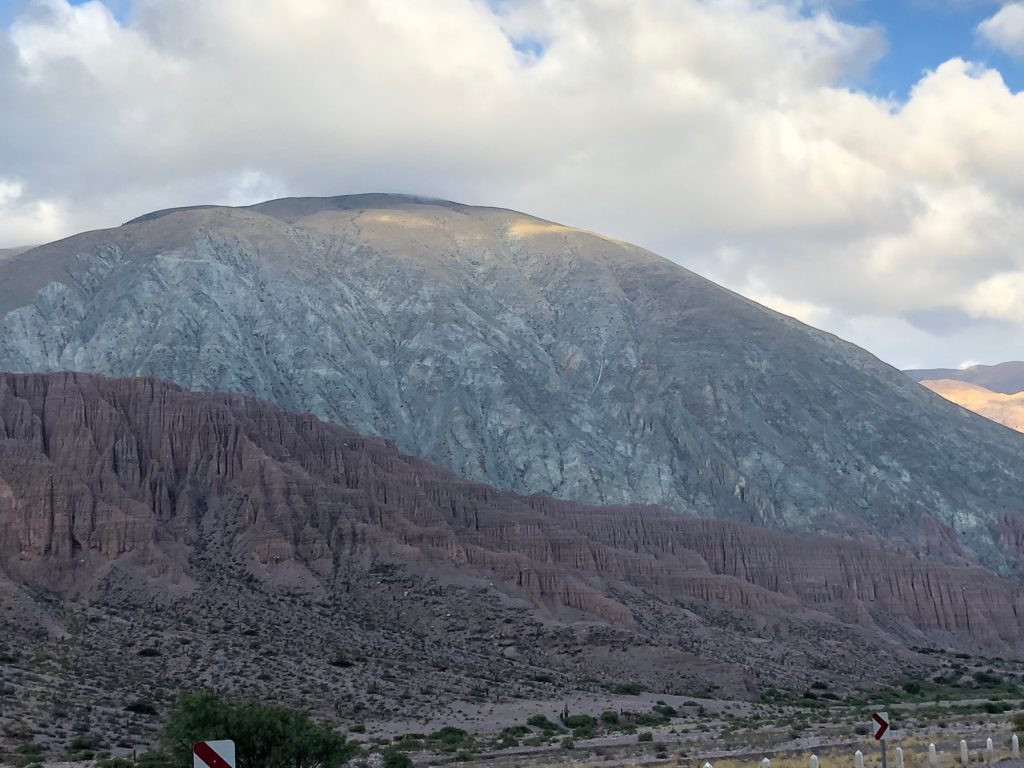 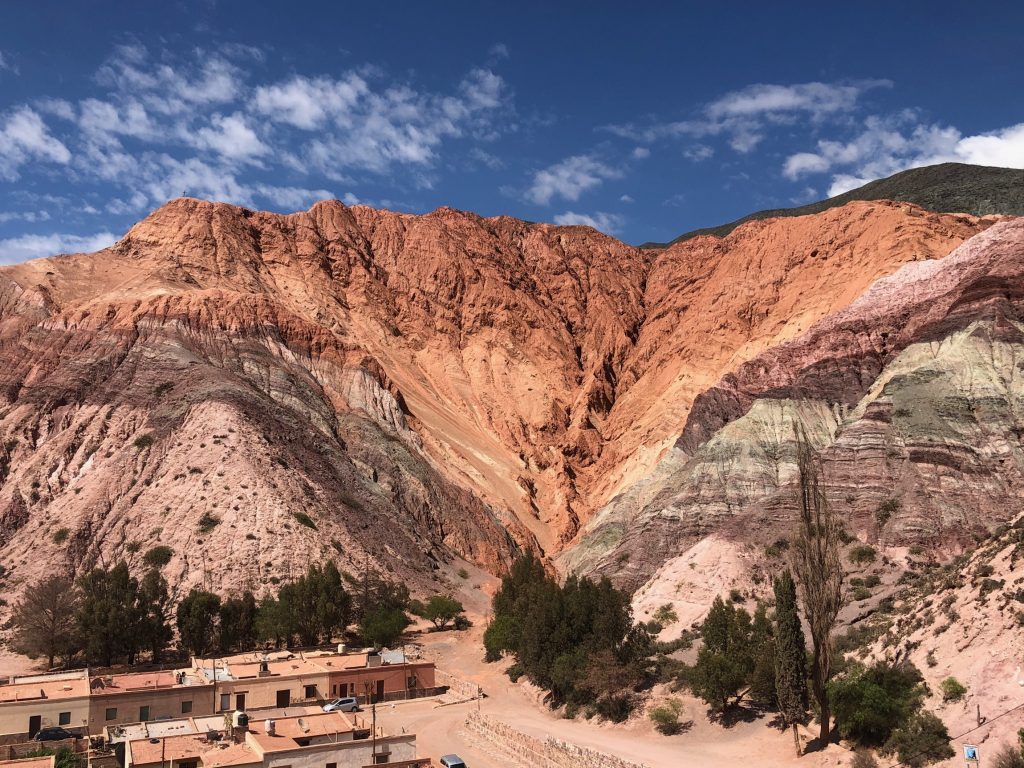 These then develop into full on bands of colour as we enter the village of Punamarca that change shade in the sunset and the next mornings sunrise.  The next day we make our way down the gorge to the city of Salta, which is quite a big and bustling city, however we were lucky enough to find a lovely campsite on the edge of the city Lido in the 240C heat, you can just see Nelson tucked into the trees in the back of the picture. 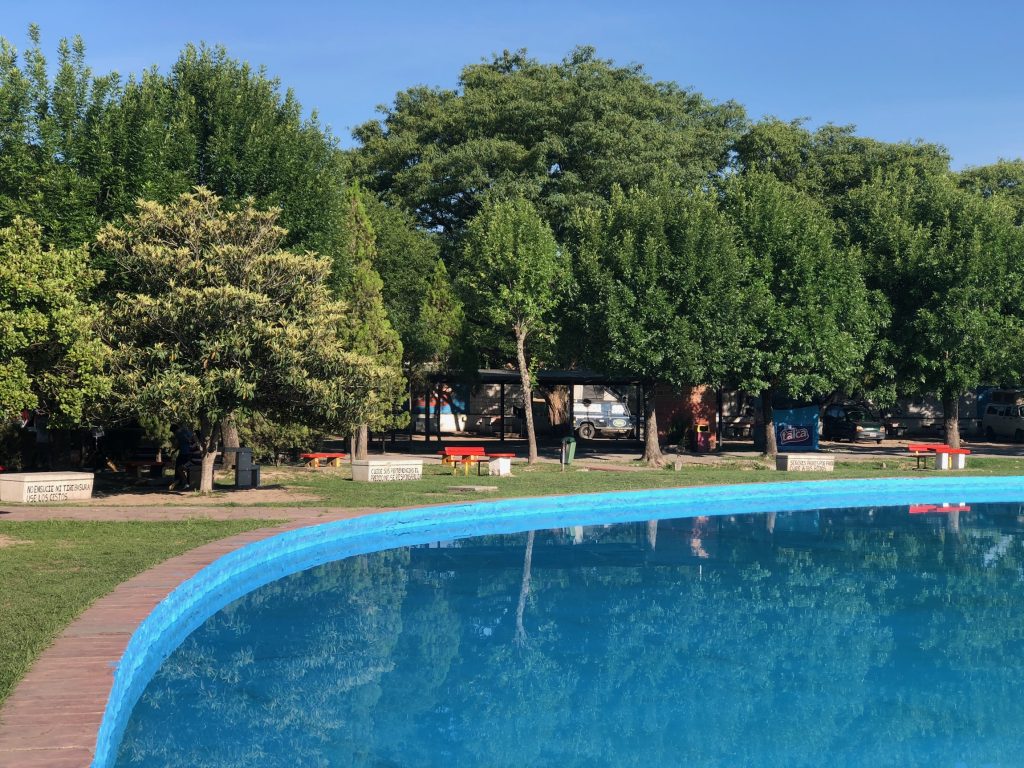 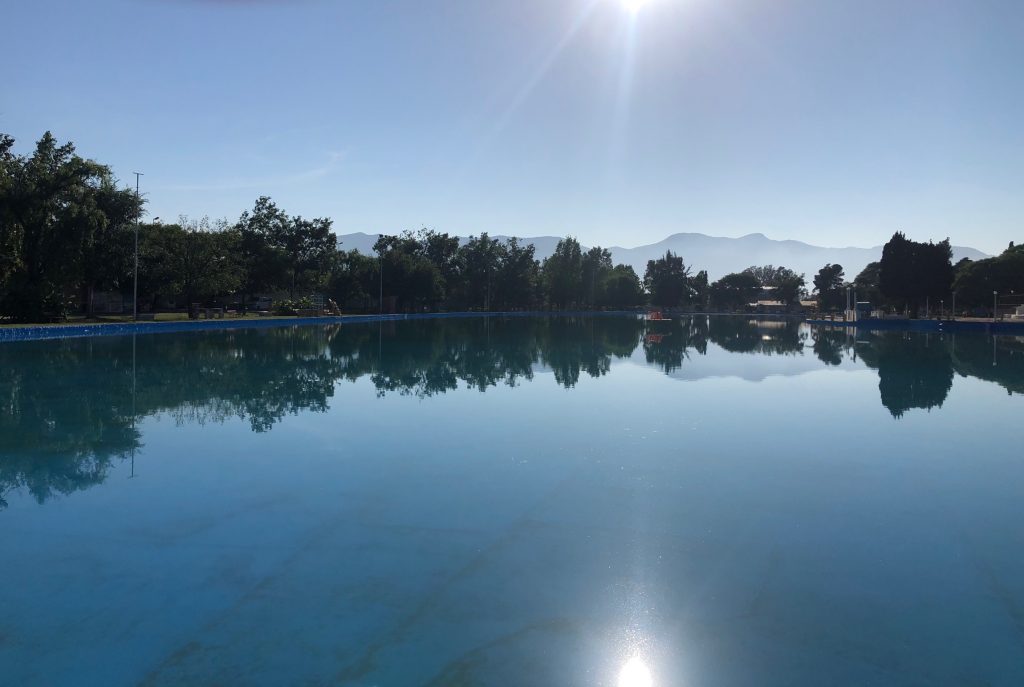 In the evening we had dinner on a terrace overlooking the main square and saw three different political parties rally in the plaza below us as we had dinner.  It seems that politics here in South America is more vocal and active than we are used to back in the UK and, I guess driven by the inequality that is so clear here, many of the movements appear to be good old style solicalist, marxist movements trying to get a fair share of the wealth of the country for the working men and women specially those farmers and indigenous folks – a worthy cause. 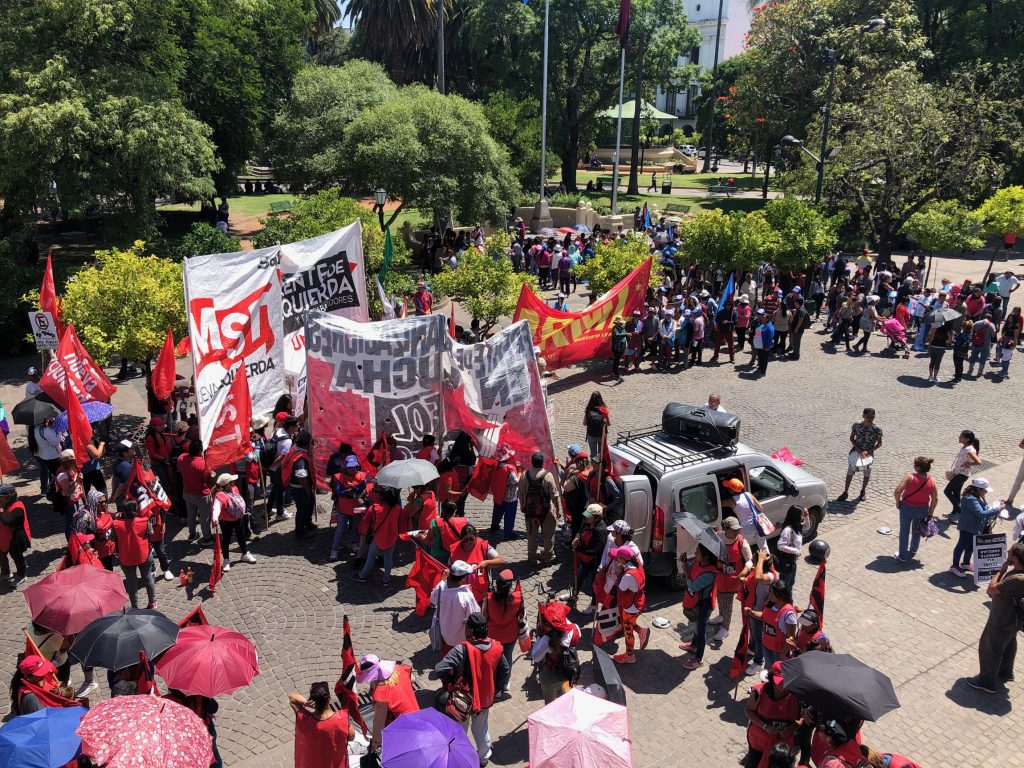 One thing which is immediately clear to us is that Argentina is much much cheaper than Chile, very nice meals for two in a good restaurant can be had for about 20 USD here that would be twice as much in Chile and the quality of the meat is vastly superior to anything we experienced in Peru, Bolivia or Northern Chile so I suppose some Stereotypes are just true !

Previous The Lagunas route, across the sky to Chile from Bolivia
Next A green and pleasant land