A green and pleasant land

We had a nice few days by the Lido in Salta which allowed us to catch up on things after a few weeks of rough travelling over the salt plains and altiplano, it is a reasonably large city by comparison with anywhere we have been for weeks so we enjoyed visiting the tourist spots and trying out Argentine food while still getting involved in the active local political protest scene.  The squares and colonial architecture of the city centre were a contrast to the hustle and bustle we saw on the bus ride from our campsite in the Lido a few kilometers outside of the city. 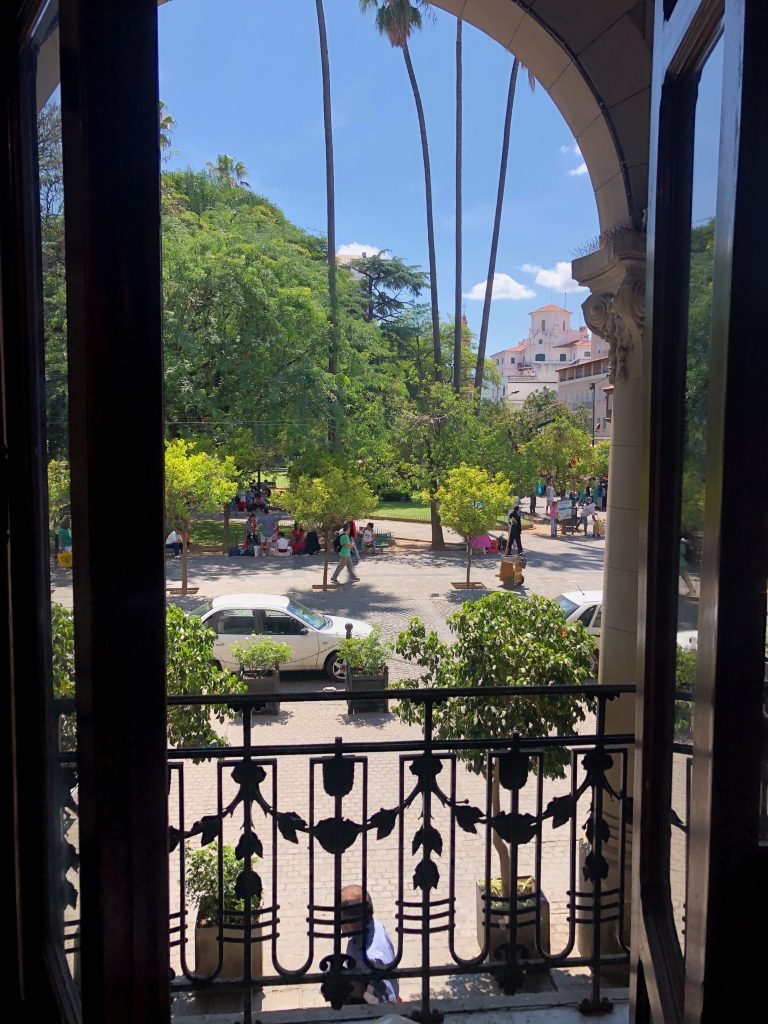 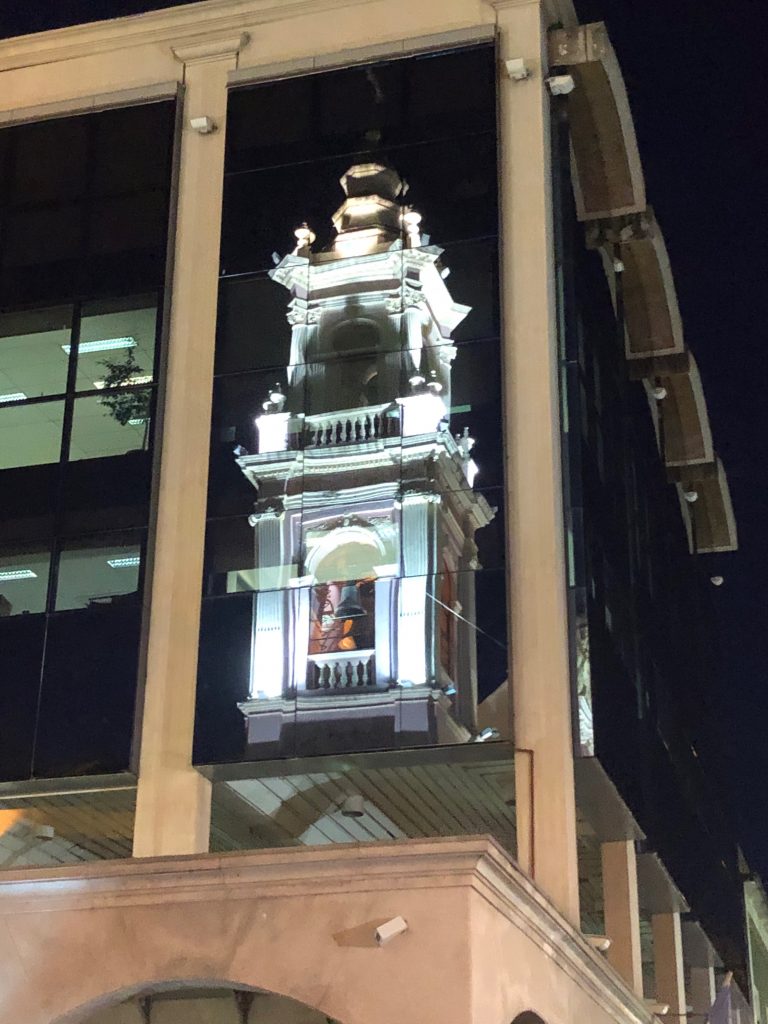 There is a nice contrast between the old architecture of the church and the new glass of the modern buildings captured in the reflection above.  At this stage we were down from the high plains and out of the most well known gorges so I was a bit afraid that we would be on straight main roads through farmland and the more adventurous part of our trip would be over, however I was mistaken…. On the map we had seen a small road from Salta to the small village of Catchi, not the most direct way to the next target city of Calafayte but it looked very interesting so we headed west on this road instead of south on the main road, this turned out to be a great decision. 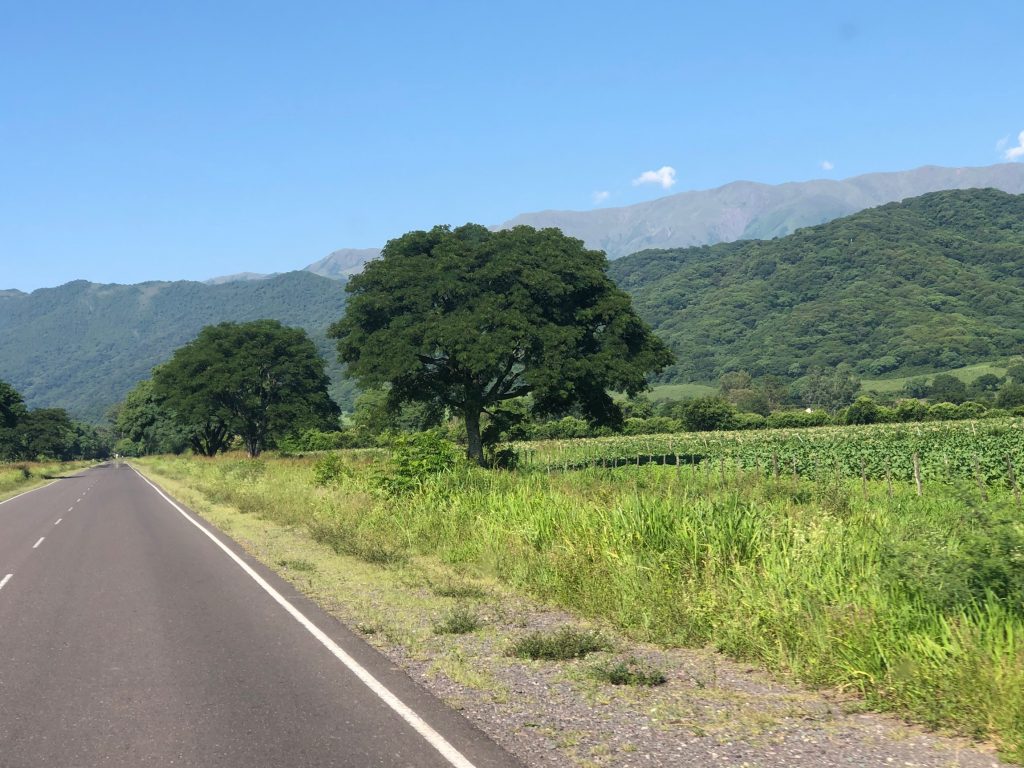 At first we were surprised, after many weeks of desert landscape of various types, by how green and fertile the land around Salta was, we even saw our first proper trees in weeks and enjoyed scooting along the smooth roads between the low hills. 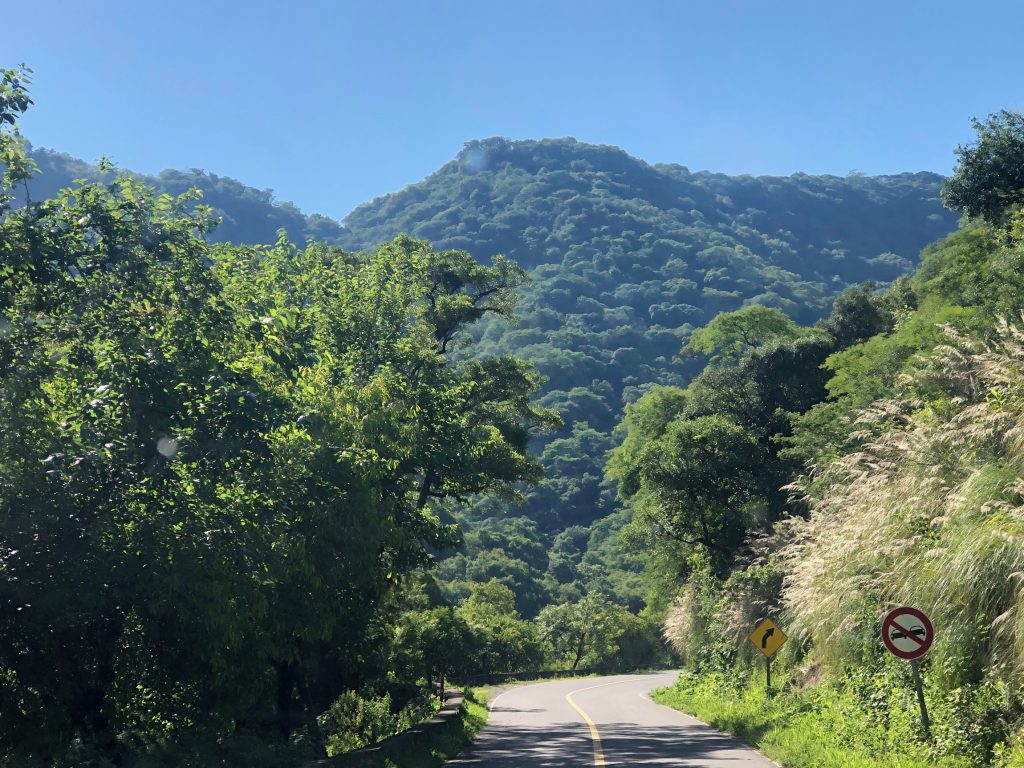 Then the road started to wind through lovely wooded hillsides increasing the contrast with the arid desert and altiplano we had become used to, as we headed up the hills and past a big reservoir we met up with a party of Brazilian motorcycles on a ten day tour and swapped tales of the roads.  They zoomed past us with a wave eventually and the road climbed higher gradually out of the trees and into a new landscape of green hills and looming cliffs and we lost the nice smooth road to loose but well kept gravel “ripo” but the views were great again and the driving pretty easy. 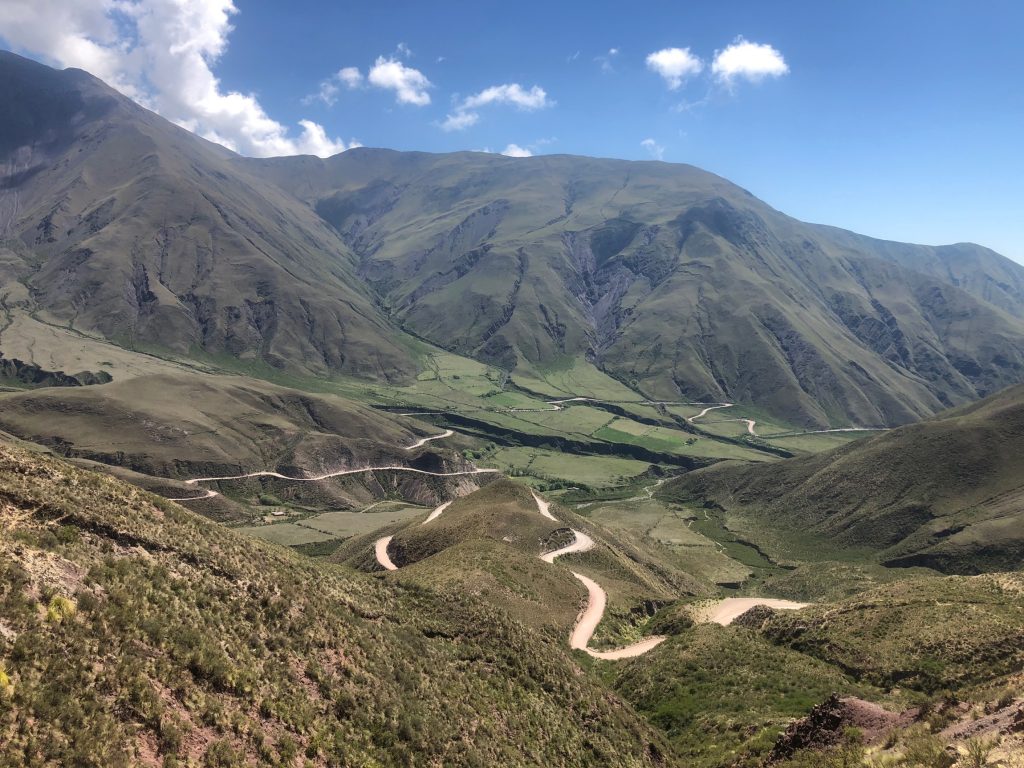 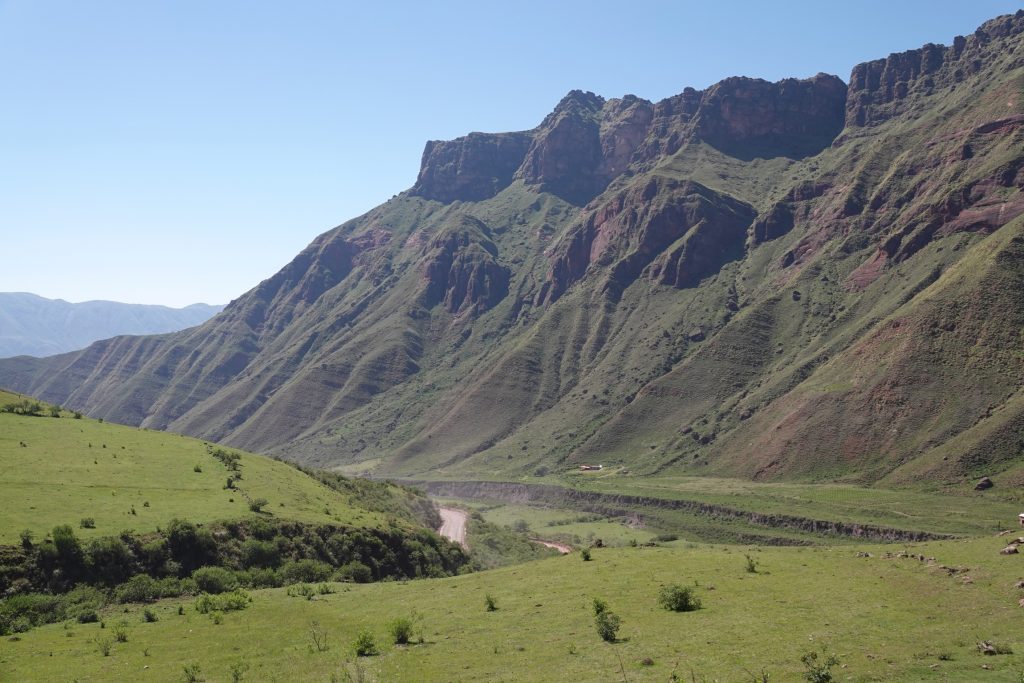 At the end of the day after a nice lunch in the village of Cachi we made our way to the ambitiously named “utopia camping” for the evening.  We were greeted by a nice German girl who was volunteering there and she got us parked up between the rows of vines and showed us the “facilities” in this case the shower was in the middle of a group of bushes and the toilet was in the middle of another set of bushes, and your only protection for your modesty was to whistle loudly while going about your business as there were no walls involved at all ! 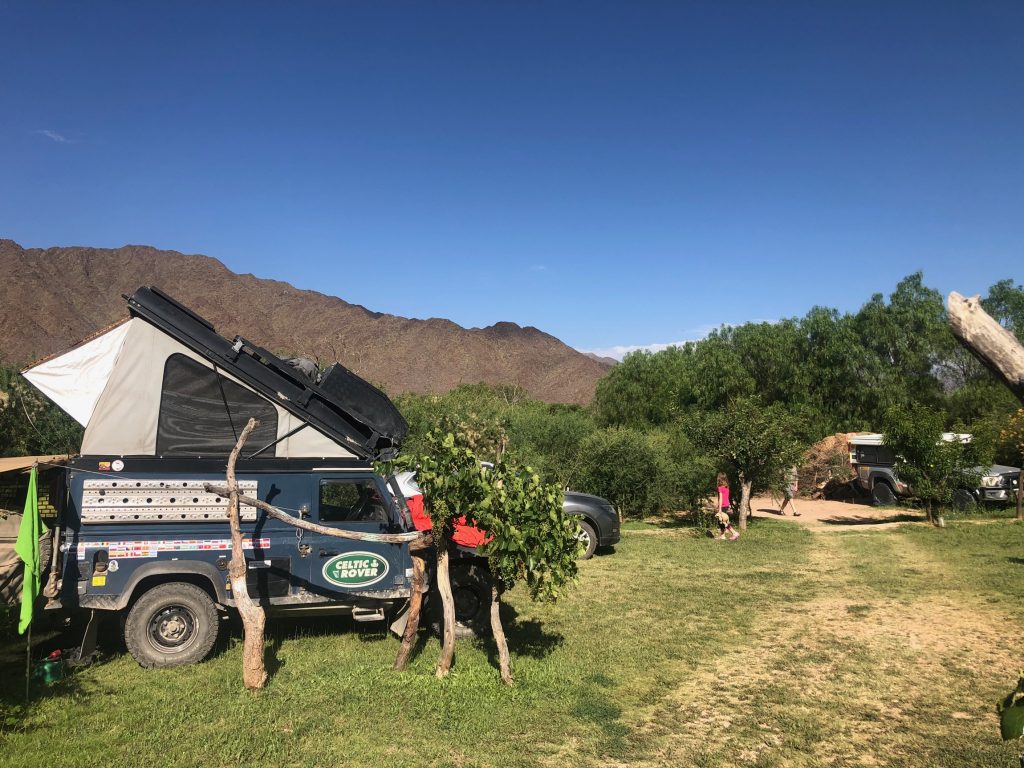 It is a measure of how far we have become flexible that we really did not bat an eyelid at this unusual set up and happily set about whistling as we showered before taking a dip in the inflatable pool set up in the orchard.  It turned out to be a lovely site, the owner was himself an overlander and two families were also staying so we all had a good chat over beers and cups of tea about our adventures.

One thing that had surprised me was after we crossed the mountains we joined the major route 40 which runs 4000km plus down Argentina, we will be on and off this road for the rest of the trip to Ushuaia, but it was not the main road I expected, in fact it was rough loose gravel with some washboard and narrow bridges. 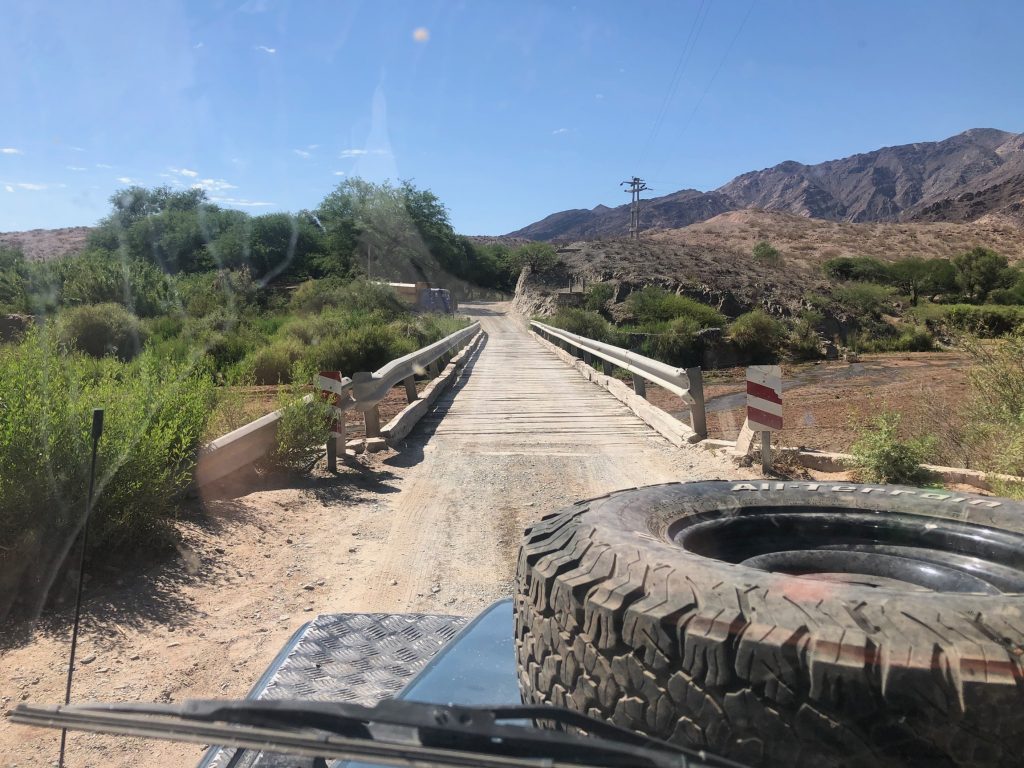 As we joined it again after our nice night at Utopia it became even narrower and more rippled, we were pleased not to meet any traffic on the narrow sections as we did see one or two buses in the course of the day and a lot of reversing would be needed to get past them on some of the narrow sections.  It seems that the new road on the other side of the valley has taken all the traffic off R40 in this section of Argentina and it is very rarely used. 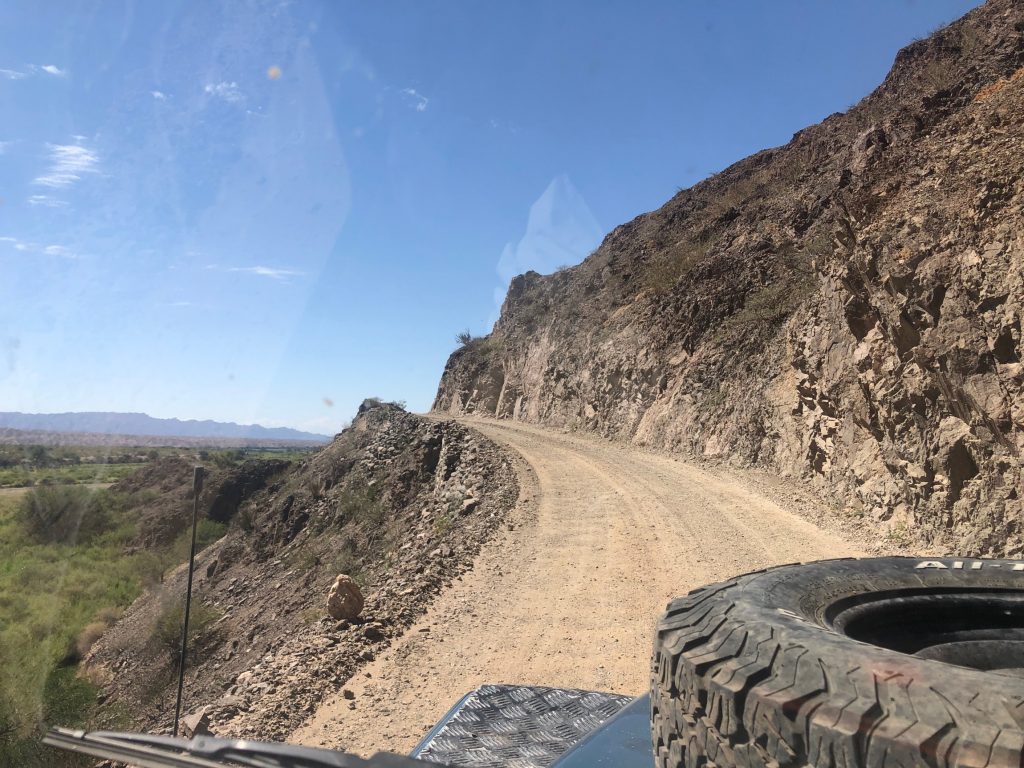 Unknown to us we were heading once again into a spectacular landscape of jagged rock formations and little habitation, certainly no towns or villages bigger than a few houses, so from the green and pleasant land of Salta, and the lovely green cliffs of the drive over the mountains we were heading into a considerable wilderness of massive geological features that the stoney and rough road somehow wended its way through for 100km or more. 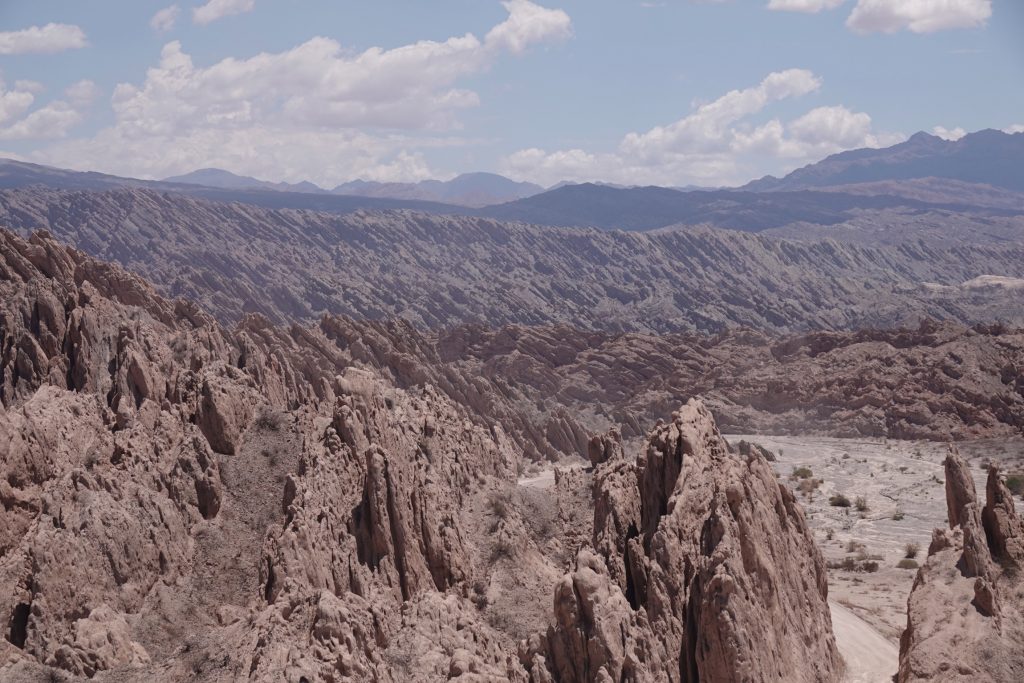 I have no idea how the road builders picked a route through this mass of jagged rocks, buttresses and ridges but somehow sweeping between the outcrops a road was built across a hundred km of this rock wasteland 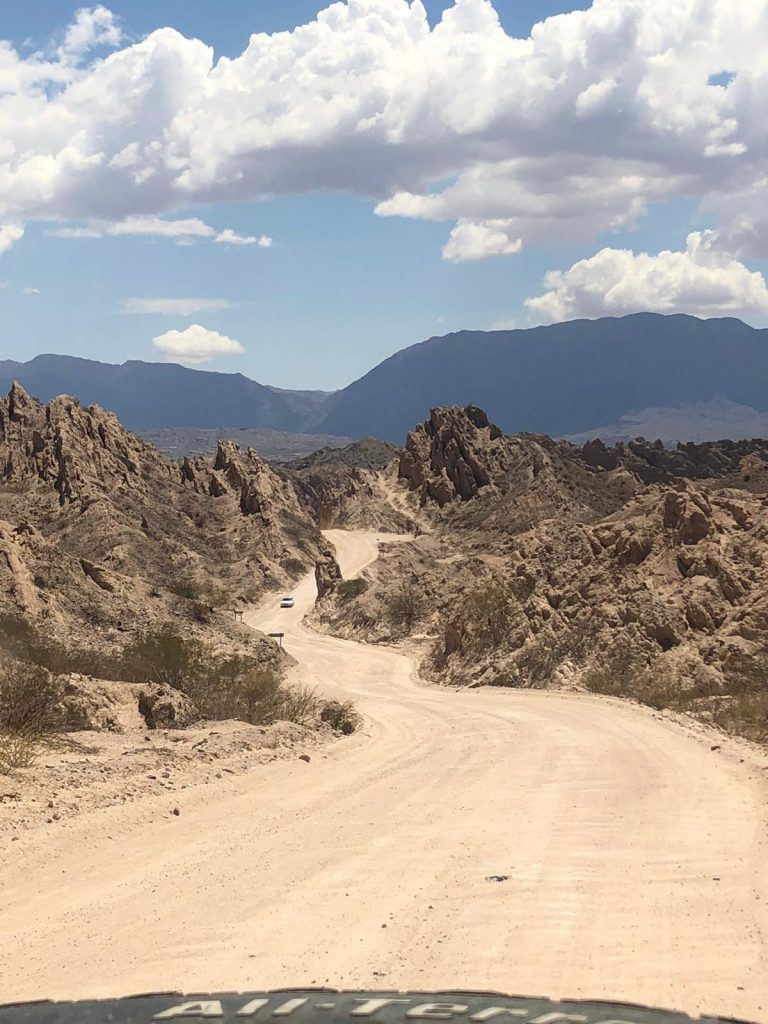 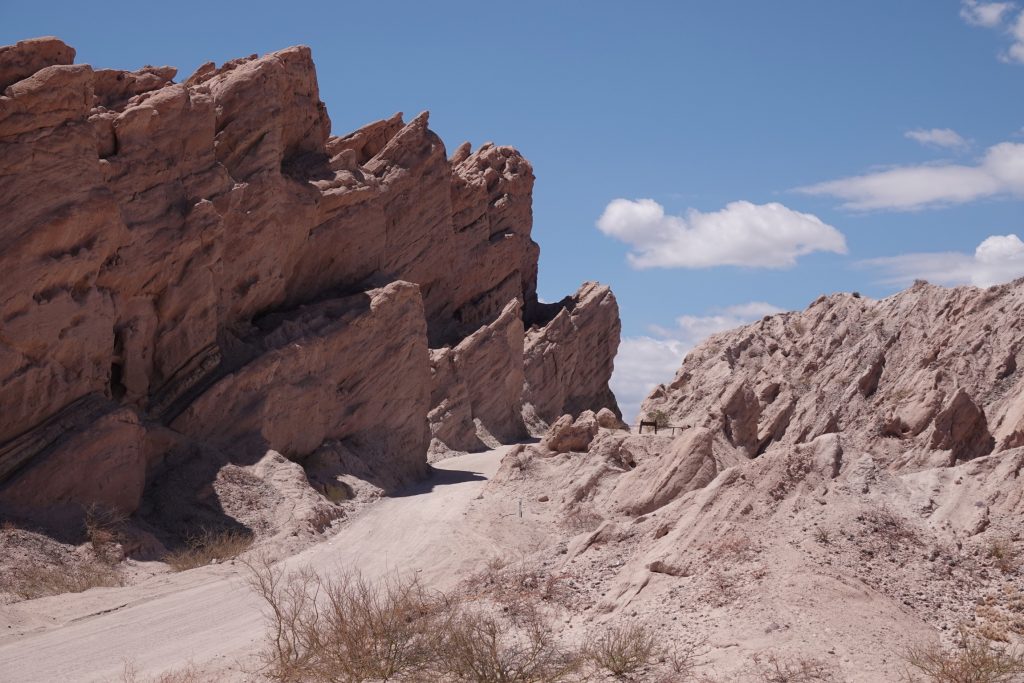 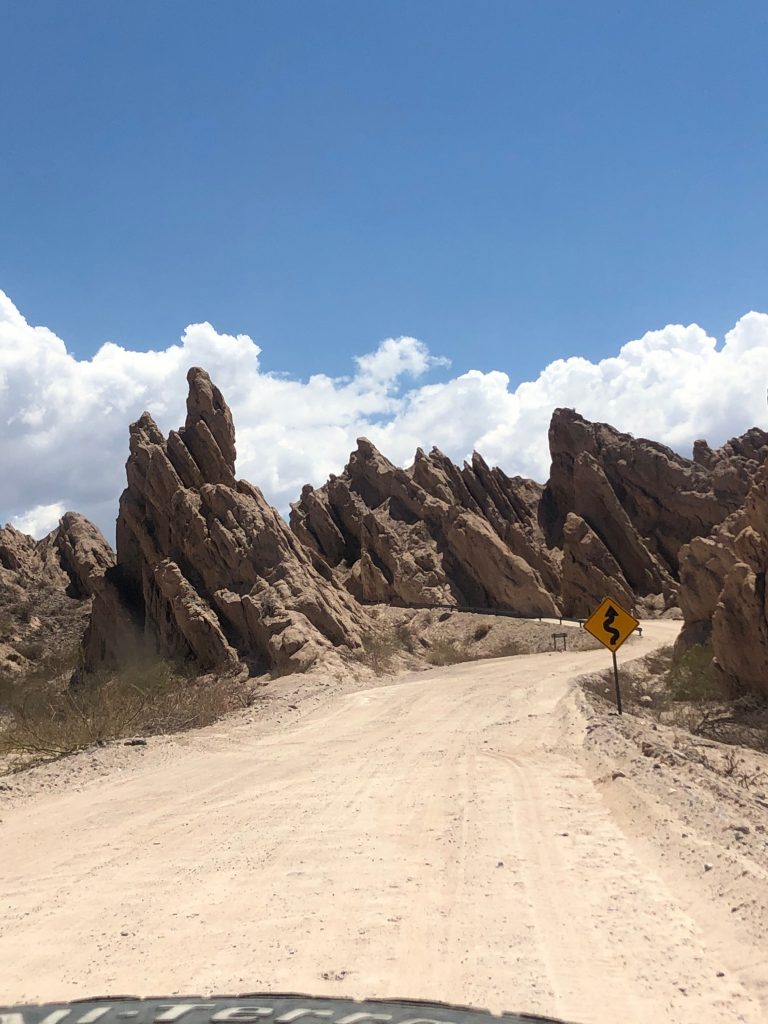 Finally after many hours of enjoyable driving we reached the town of Calafayte our destination for the night, the next day we took to bicycles on the bus to a major gorge, the “Devils Throat” about 50km from the town and then cycled back up to the town. You can just see Mark at the bottom of the gorge if you look carefully, it is reminiscent of Petra in Jordan only much bigger in scale. 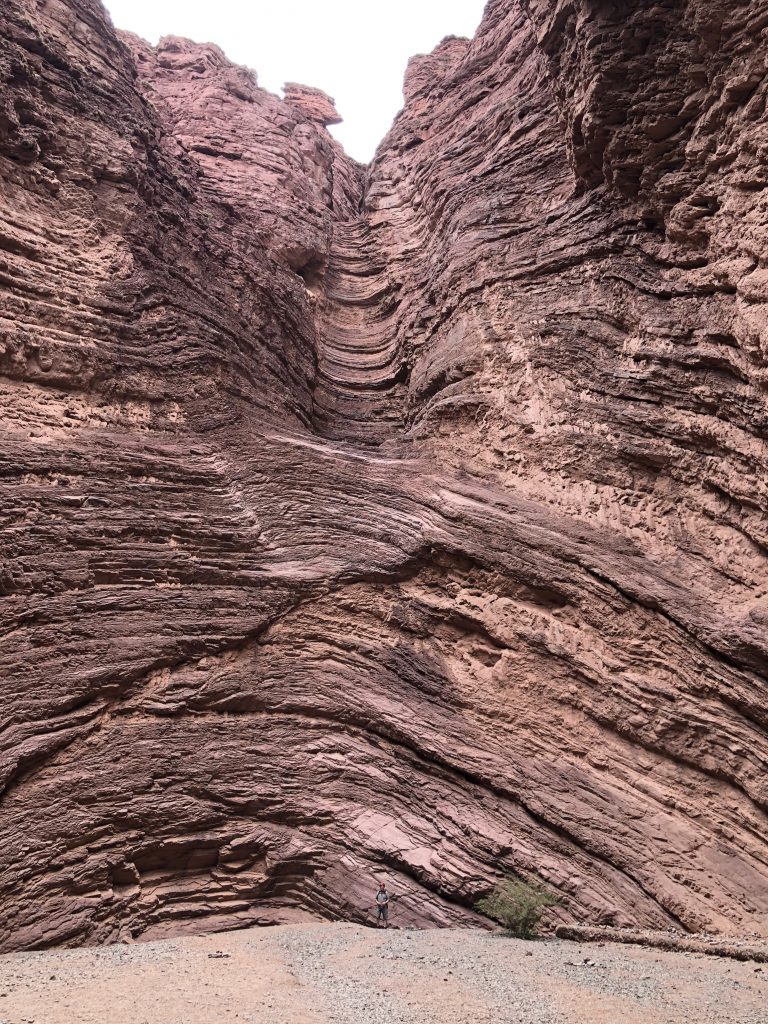 Now the guidebook said cycle down to this feature and get the bus back, but Mark got a bit confused so we took the bus downhill and cycled back up the hill to the village, so instead of a nice downhill section as promised to get me on the bike we actually did a 1000m ascent.  This misunderstanding only came to light when I said to Mark as we were riding “Mark, if we are going downhill why is the water flowing in the opposite direction?” but it was a lovely ride helped by having the wind behind us and a good story to tease Mark about. 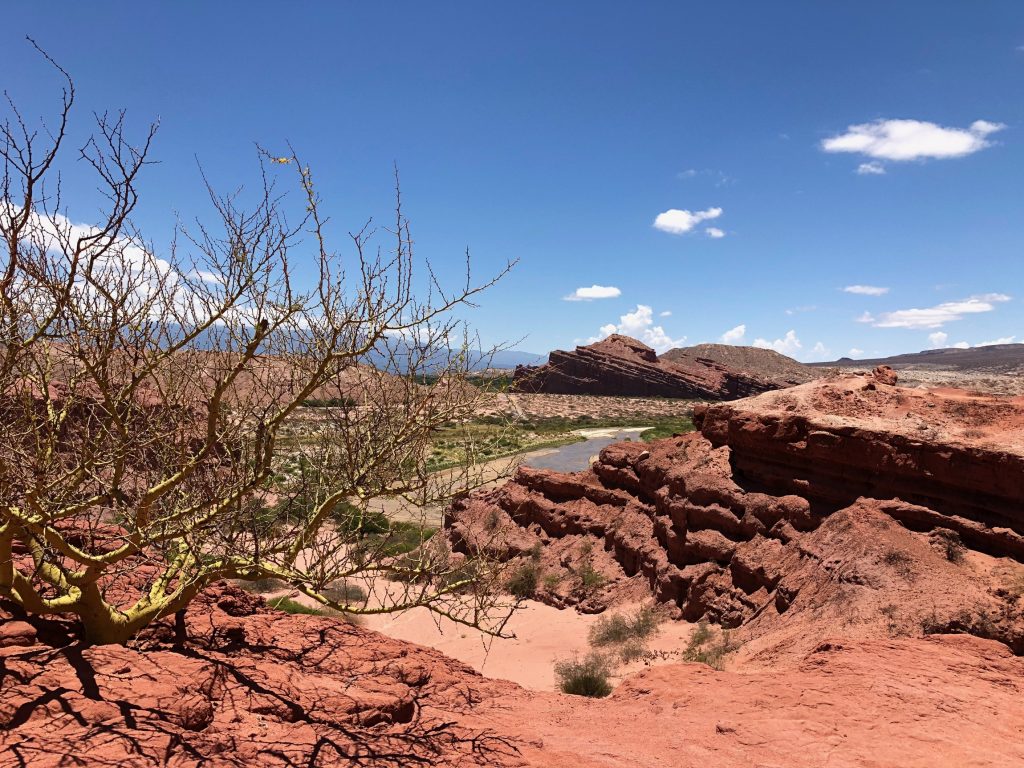 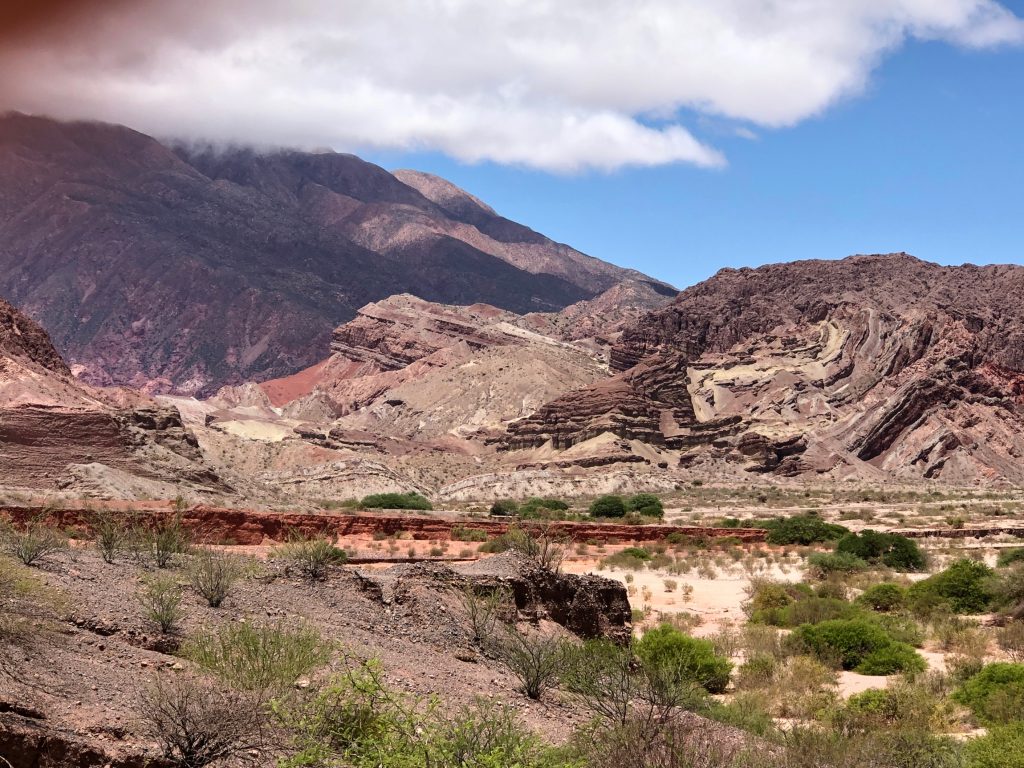 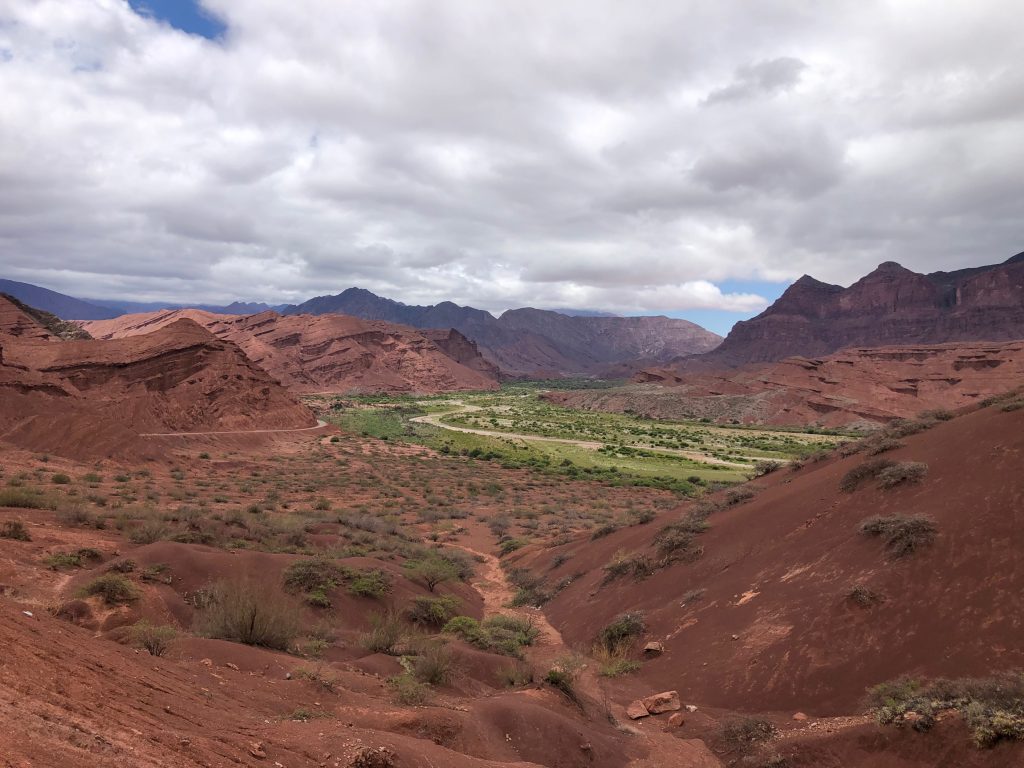 Calafayte turned out to be a lovely town to base ourselves for a few days continued to expand the variety of the scenery that we have experienced throughout this trip to South America, that daily variety in climate, scenery, culture and altitude has been the biggest surprise and delight of the whole trip so far.

Sadly this part of the trip is coming to a close, as I have to get to Santiago in Chile for the flights home for Christmas, and that will be the end of Marks section of the trip, but Santiago is some 1500km away and we have three days to get there so time to get a move on !