So recovered from our bike ride up the hill to Cafayate we braced ourselves for the “big run”down to Santiago, it is a feature of trips such as mine that I do have a very flexible schedule but I also occasionally have specific dates to hit for airport pick up and drop offs.  In this case we had to get to Santiago some 1500km away in about three days so that we both could get flights home in time for Christmas.  We had agreed this plan upfront as we wanted to spend as much time as possible in the dramatic landscapes of the Bolivian Salars and the Altiplano that stretches across Bolivia, Chile and Argentina and this still seems to have been a good choice.  As we rolled out of Cafayate the roads thankfully cooperated and we were faced with lovely smooth flat roads with almost no traffic 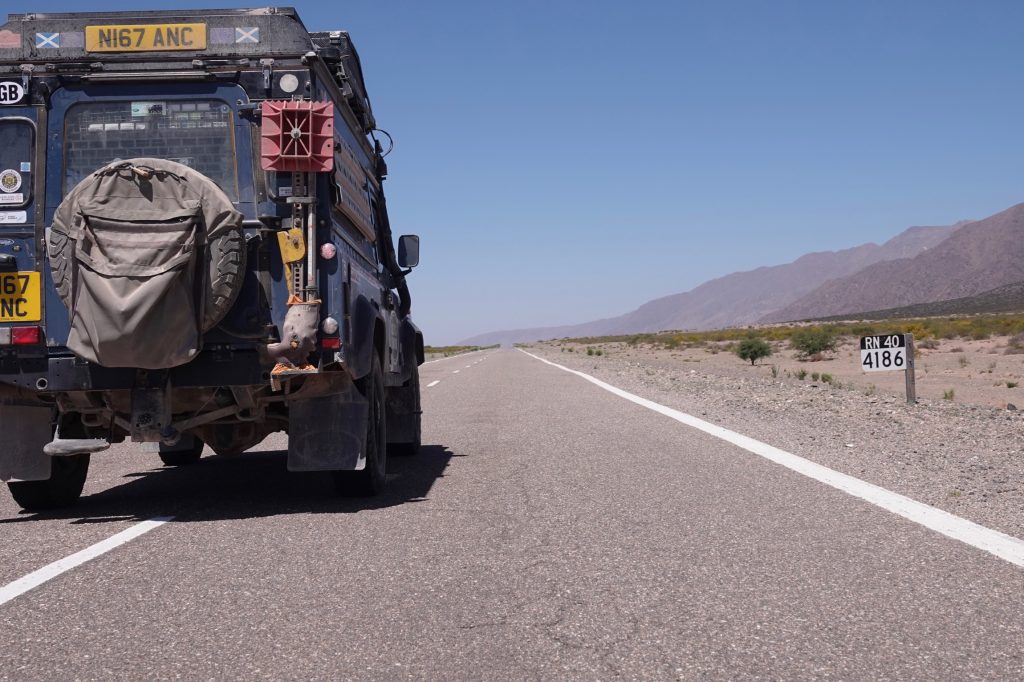 In this case I was able to stop astride the white line in the centre of the road for the picture as the straight was about 10km long, flat and we had not seen another car for at least 30min.  Nelson was running well at 80-90km/hr on these lovely roads but I was conscious that we did not have time to have a breakdown and get it fixed so I would regularly check on the engine at our rest stops and listen to every sound as we piled on the hours and the miles in the valley between the mountains running south.

Despite making good time we did not get as far as we hoped on the first day so we pulled into a campsite just before darkness and reconsidered our plan to take a “scenic” route to Santiago, it could be that we should head directly down the R40 to Mendoza to save some time and make our next day journey a more manageable 350km and 5 hours on a nice smooth road rather than head once again into the mountains.

In the end the decision was easy as in the same campsite we met a forlorn German guy, Norman, who was travelling in South America on his classic Vespa scooter that he had owned since he was 16.  Unfortunately his engine was in pieces in his hands as the piston had been sticking after every few hundred kilometers, we chatted together and discussed the reasons for this but quickly came to the conclusion that neither he or I had the expertise needed to really diagnose the problem and the wear marks on the side of the piston and the bore suggested to me that this was a serious problem not just a clean and assembly job. 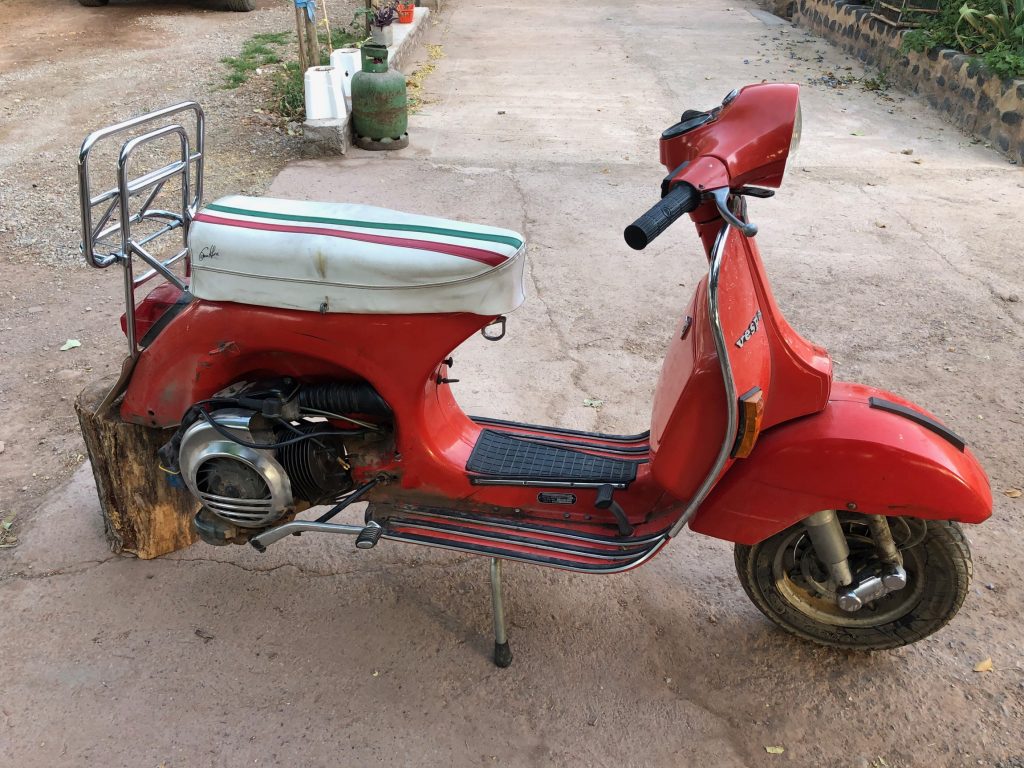 Norman agreed and had already tracked down a Vespa specialist in Mendoza, his only problem was that city was 350km away and it was not obvious how he could get there with a local taxi or bus.

Looking at the Vespa I remembered that my friend Colin had once got his very fancy racing bike into the back of Nelson, because he did not want it to get dirty and scratched by hanging on the bike carrier at the back, and as far as I could see Normans vespa was about the same size in height as Colins bike with the front wheel removed.

So after a bit of huffing and puffing all three of us managed to get the Vespa and Norman and all his kit into the back of Nelson with a little help from the roof rack for some of his bags and the next morning we all set off for Mendoza on our rescue mission. 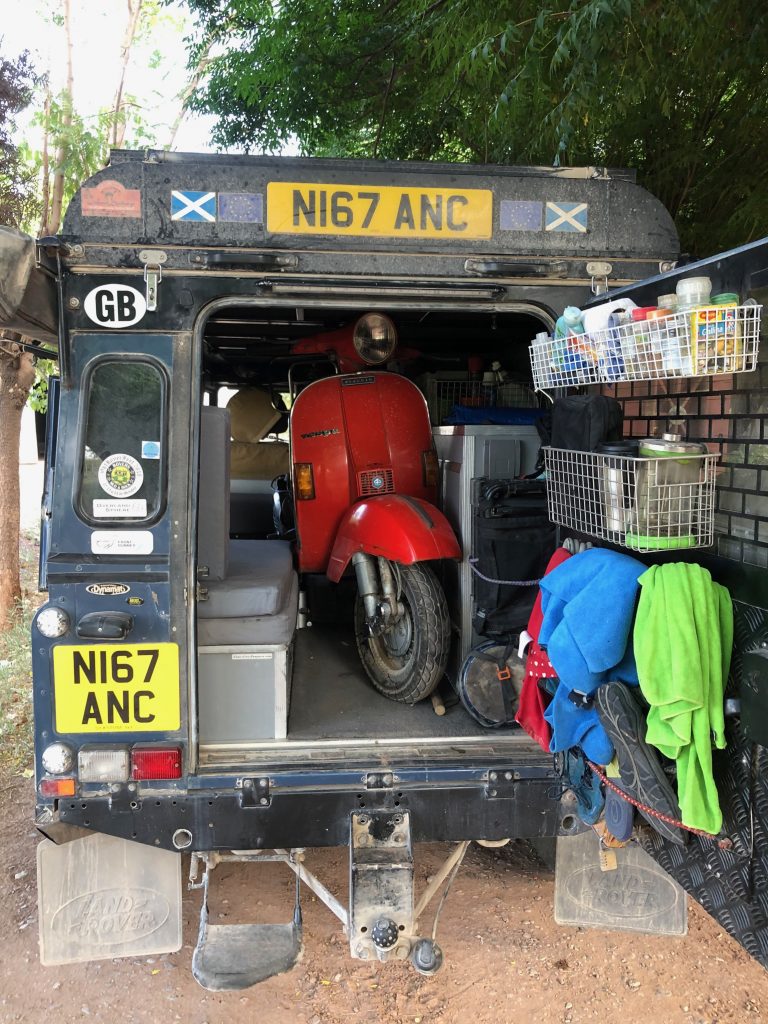 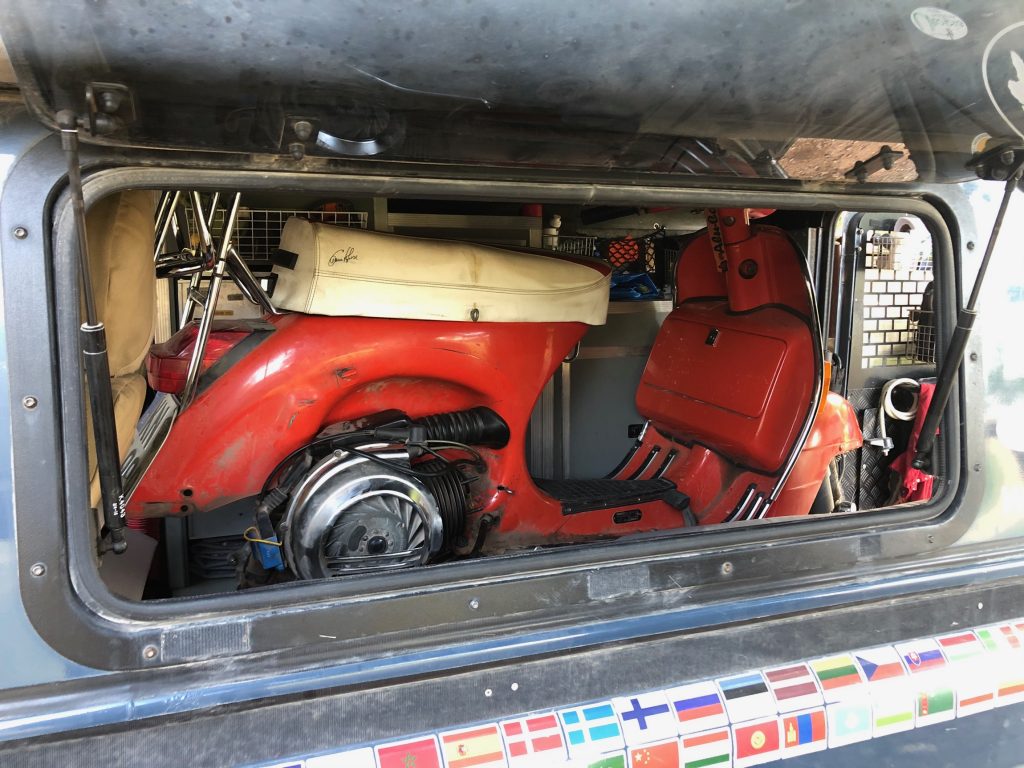 Surprising what you can get in the back of Nelson with the use of a few spanners and much sweating, as we can lift the roof we can stand inside to get the Vespa in position and then close down the roof, getting it in without the lifting roof would be almost impossible. 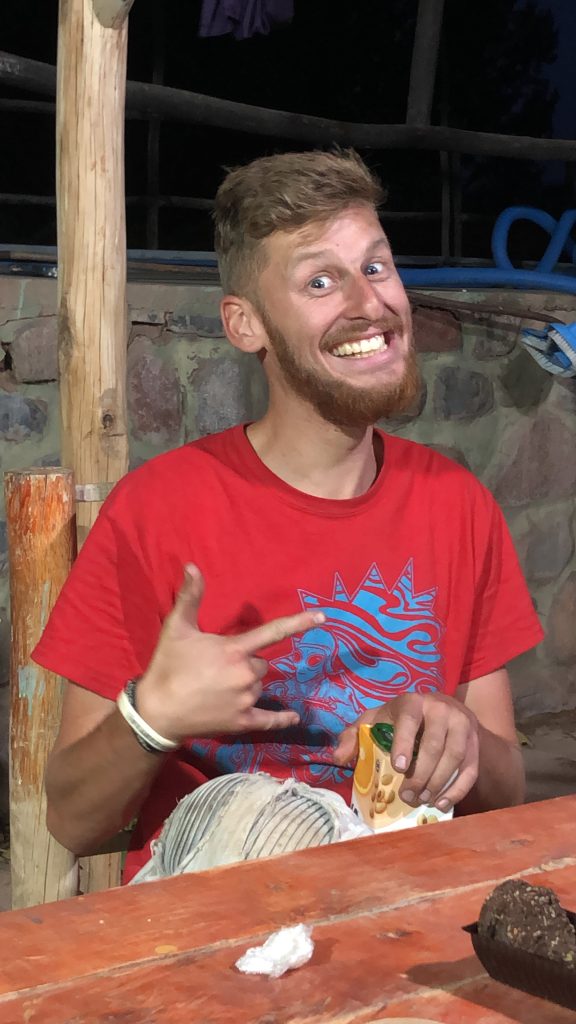 Norman was very pleased when he realised that the scooter would fit in to Nelson so he celebrated with an extra cookie.  The drive to Mendoza was a very easy 5 hour trip.  As we drove down the road we checked the map for a lunch stop, we look usually for Empanadas, the local version of a Cornish pastie and hope for some coffee.  I was surprised to find that there was a shopping mall on the way with a Walmart attached so we pulled in and found that they had a Macdonalds ! 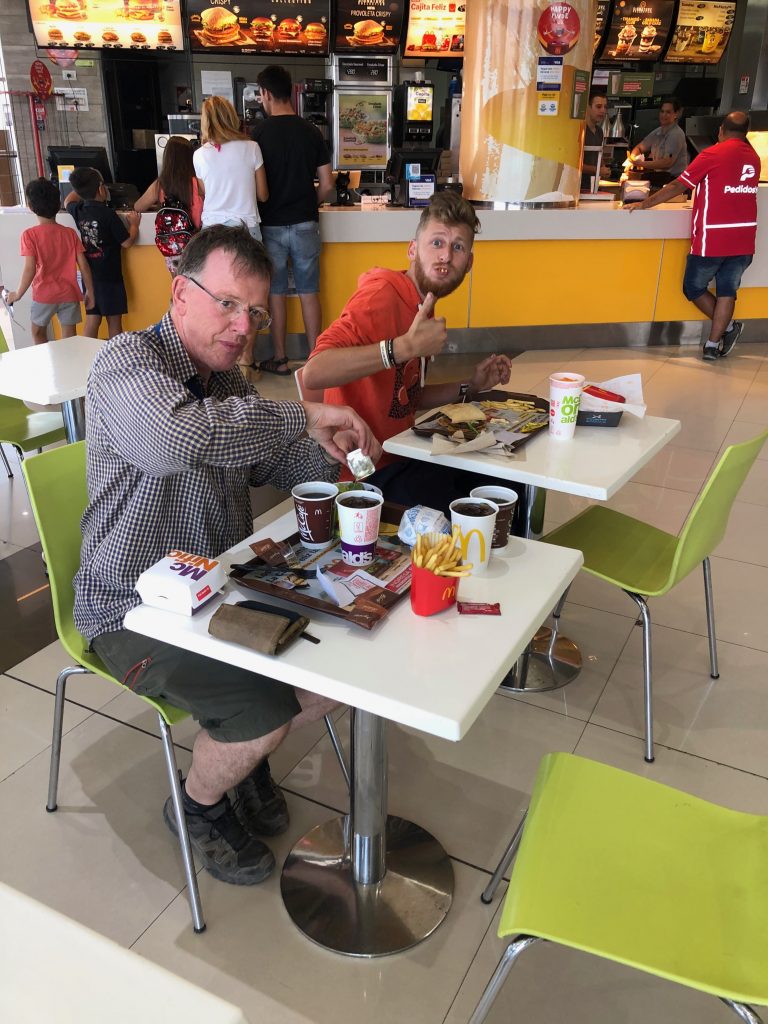 Even Mark who never eats MacDonalds at home, could not resist the cheezeburger, coffee and fries !

As it was a Sunday we dropped Norman at a hostel near the Vespa specialist and parked Nelson for the night in a secure car part where we could “camp” among the parked vans overnight.  Mendoza is one of those places where theft from cars is quite common so parking in a secure compound was necessary.  Actually it seemed to us to be quite a nice city and we enjoyed walking through the parks and had a lovely dinner in what would be our last night for some time camped in Nelson. 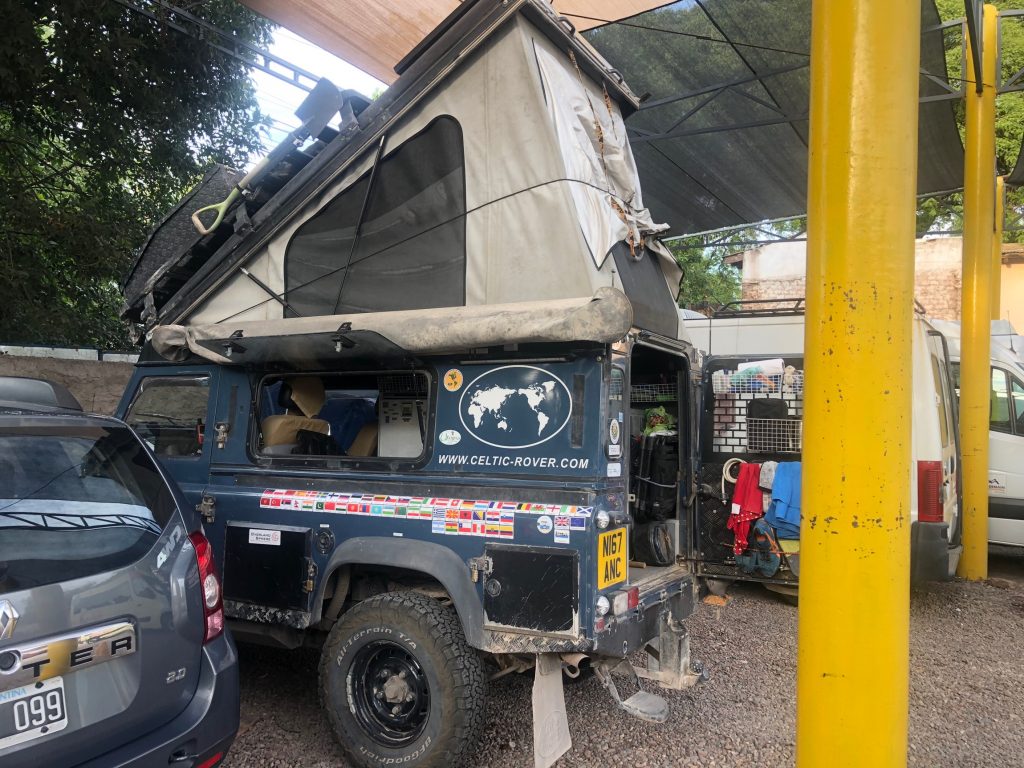 Our luxury campsite in Mendoza, a car park, total cost £2 for the night 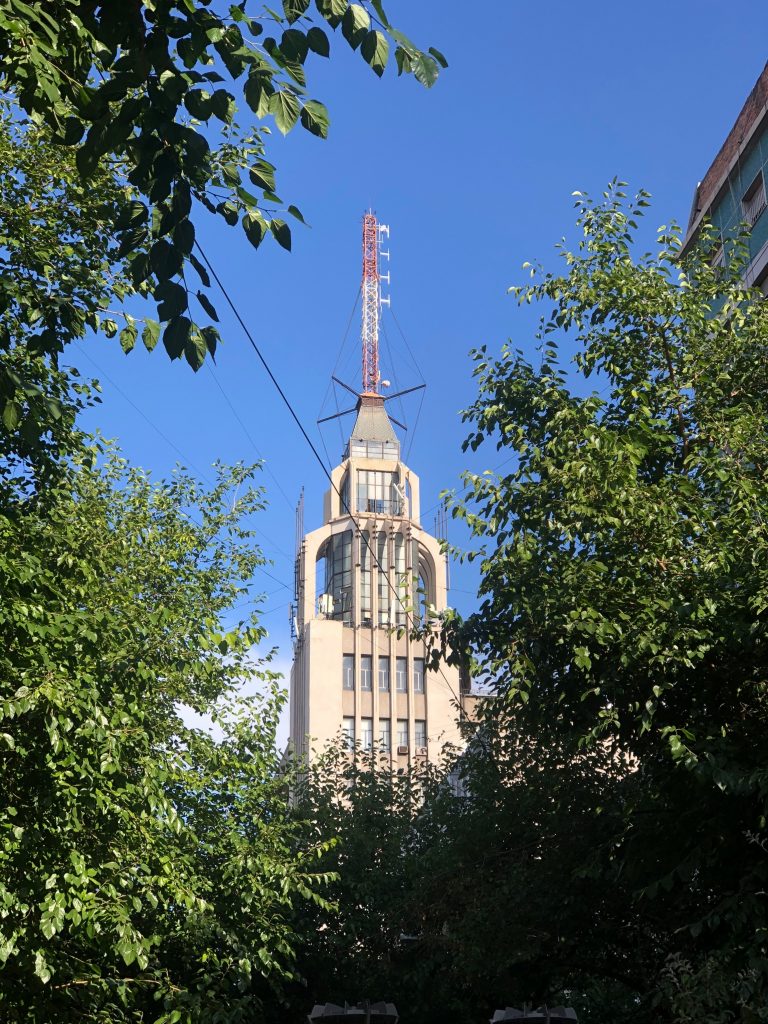 Interesting art deco buildings around the central park in Mendoza and a lovely set of fountains with added rainbows due to the setting sun. 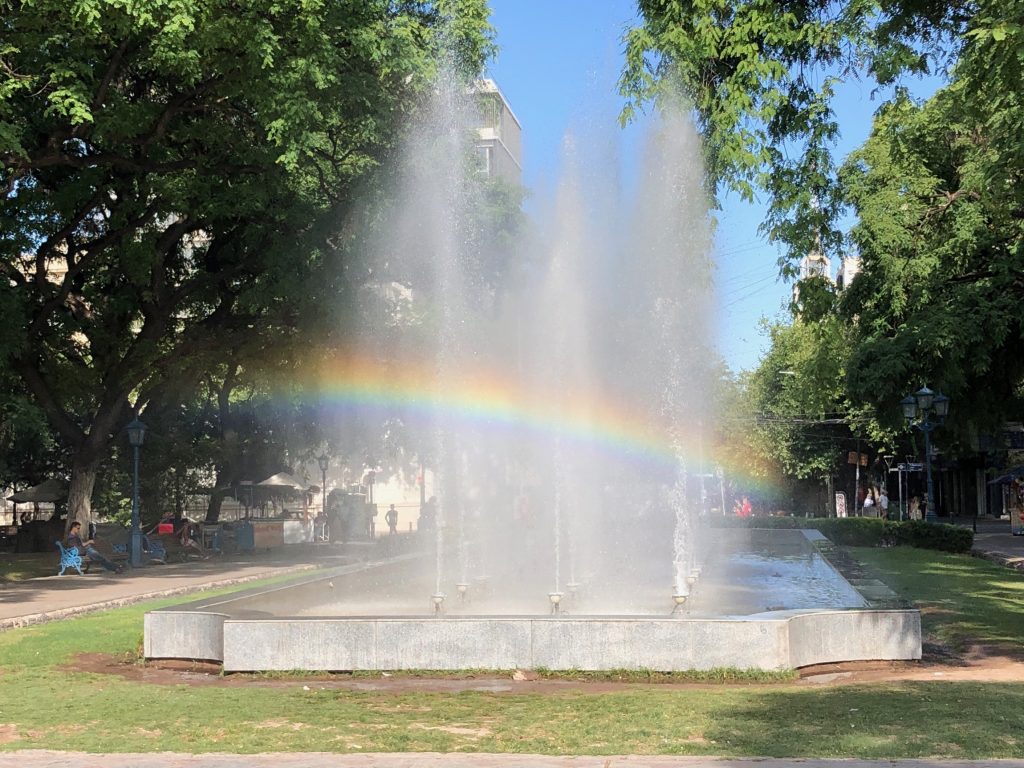 The next day we set off for Santiago which is our last crossing of the Andes for this section of the trip, the road was easy with some nice views. 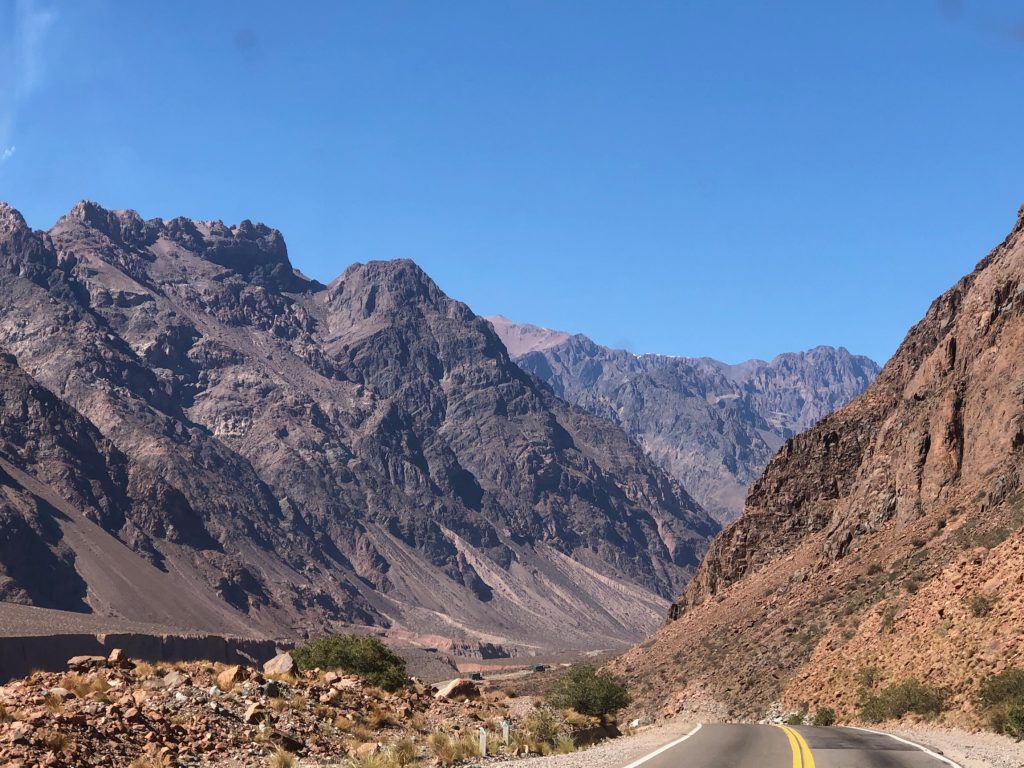 We pass quite close to the highest peak in the Andes , Aconcagua at 6959m, one of the mountains that an Inca mummy has been found on in recent times.  Turns out they were pretty good mountaineers ! 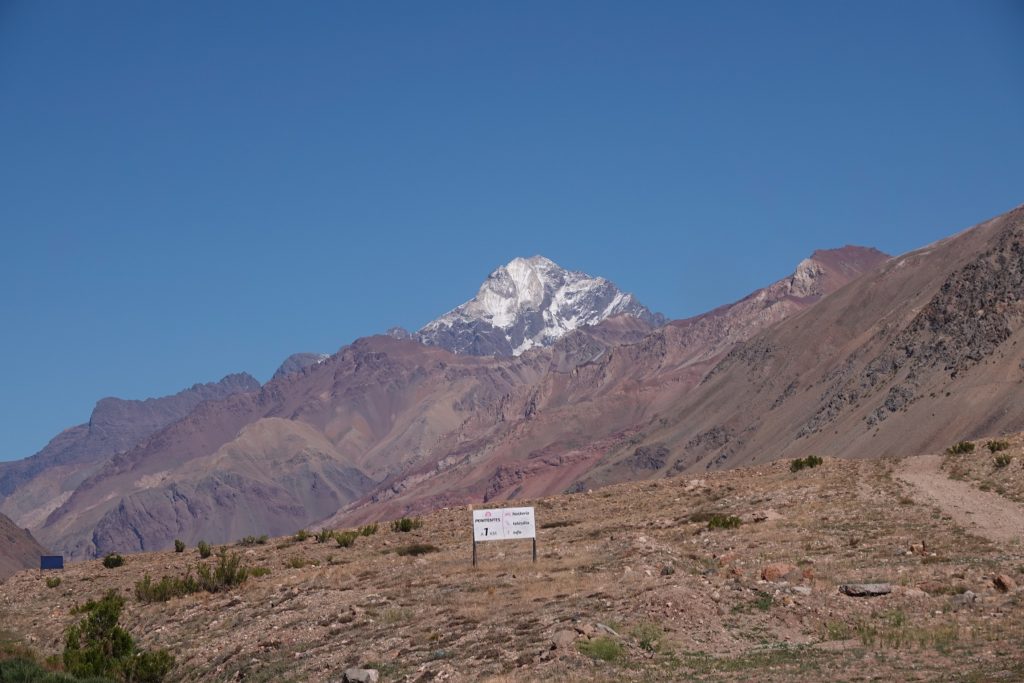 Finally we made it to the relative luxury of our hotel for the last two nights, so we had a base to sort out our kit, clean up the car and ourselves, and get some laundry done before heading back to the UK.  So I am writing this final blog of this part of the trip on a desk overlooking the park having had a nice dip in the pool and a super dinner last night, a little bit of indulgence before heading home for Christmas. 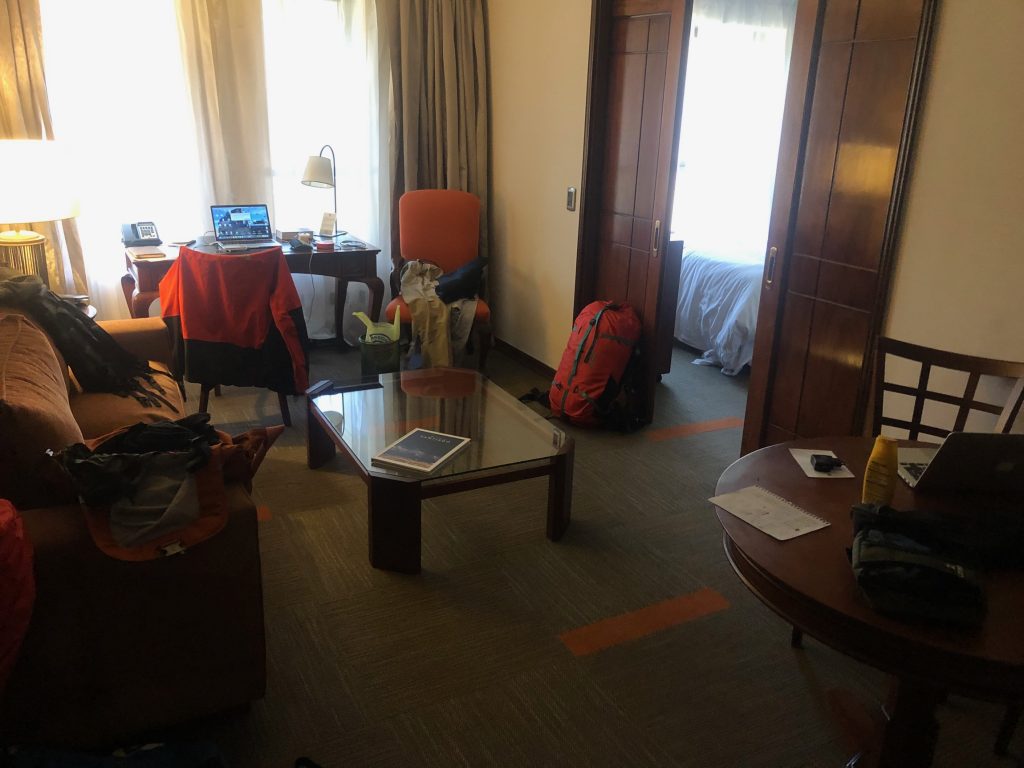 Nelson too is getting a Christmas break, in his case he is in the custody of the local Land Rover dealer who is going to repair the bush fix oil leak (which has just started to leak again) with the correct parts while we enjoy Christmas at home.  Hopefully when I come back with another set of the correct parts (just in case) Nelson will be all checked out and in good shape for the next leg of the trip, Patagonia with Lee after a good indulgent Christmas at home !

So to anyone that actually reads this stuff I wish you a Happy Christmas and a Peaceful New Year, see you next year on the road.

Previous A green and pleasant land
Next Sunshine in Santiago