THE SNOW CAPPED ROAD TO CHINA

To cross China as an Overlander, in you own car, is one of the most difficult transits we face in the world.  The reason is that the Chinese Government does not recognise your registration in the UK, does not accept the Carnet, requires you to be with a guide, on a formal tour, register your car in china, get a Chinese (provisional) driving licence  and finally to give them in my case a 8000 USD “Customs Deposit” which apparently I am going to get back in a few months…..

For all these reasons it is customary to cross China in a Group and many of us choose to cross china as quickly as possible in a group to keep the costs down.  In this case we were to join in with three motorbikes and by doing so and some good negotiation by our friend Marc, we were able to keep the costs around 800 Euro for Tony, myself and the Car.  To cross on your own would be something like double that amount.  To cross from Mongolia to Laos, the other favourite route is double those numbers again.

I have been lucky enough to live and work in China quite a lot so I was not so concerned about seeing the sights more about just getting to the Karakhorm highway, Pakistan, India and Nepal specially the latter which means transiting China if you also want to visit Mongolia and the Pamirs as I did.  Hopefully in the future Chinas one belt one road initiative, which is aimed at opening up the ancient silk road to traffic once more, will also open up tibet and China to Overlanders, when it does I will be back! 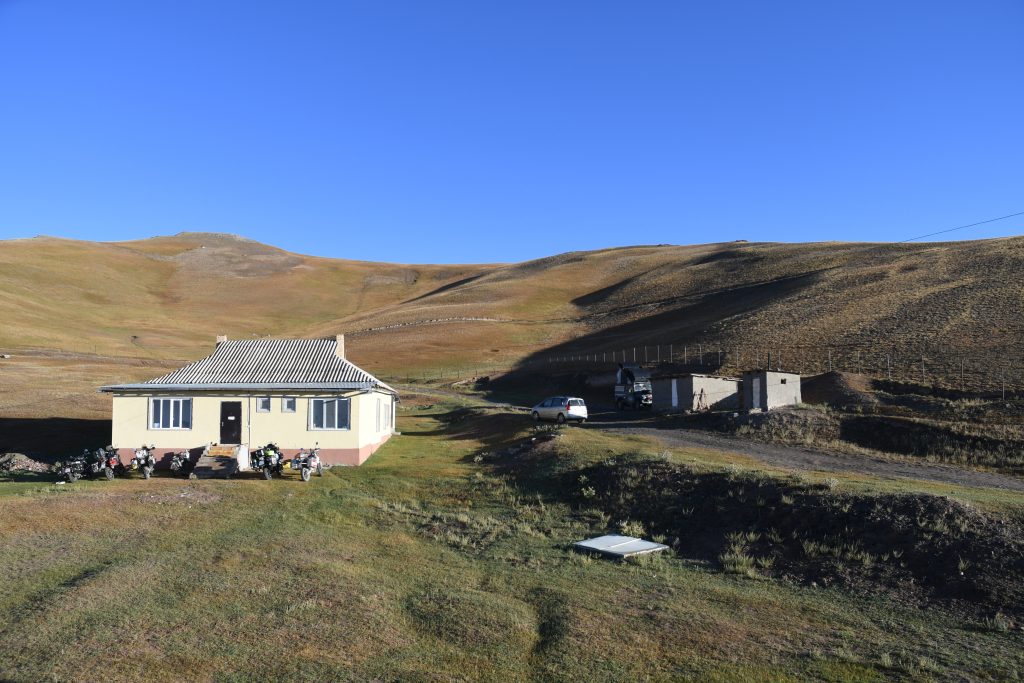 So the nice Muras guest house in the picture, in a little place called Sary Tash, was to be our gathering point on Sunday night ahead of crossing into China from Kyrgestan.  Sary Tash is a small hamlet with two very understocked soviet style shops and one petrol station which sometimes has petrol and sometimes not (as my friend Dave Spinks was to find out two weeks later).  Getting diesel that an engine can actually run on is a challenge across the Pamirs so in addition to 123 liters of on board storage in my two tanks I was carrying an extra 40L  can and needed it to avoid the black market fuel dispensed from rusty drums that we saw in some villages.

We got to Sary Tash a day early after a really tough set of driving days on the high Pamir passes, even though there is not a lot to do in this sleepy town I was glad for a little bit of internet to get in touch with the family and just to have a down day to sort out the car, do some washing and read up on the next section of the trip.

The team gathered together on the second day we were there and I was relieved to find that out team were all very nice people, quite relaxed and fun (we had never met before in person only on the internet) and there were two other motorcycles staying in the same hotel who were also going to China, in the end we travelled together all the way into Pakistan.  Here is some of the group getting together for dinner for the first time.  There are some bikers from Italy in this photo who had a massive fight with a very cross staff lady the next day, apparently someone had taken some beer without paying, it was fun to watch the cultural clash (but actually the local lady seemed to be in the wrong) and the real owner came along eventually and smoothed things out. 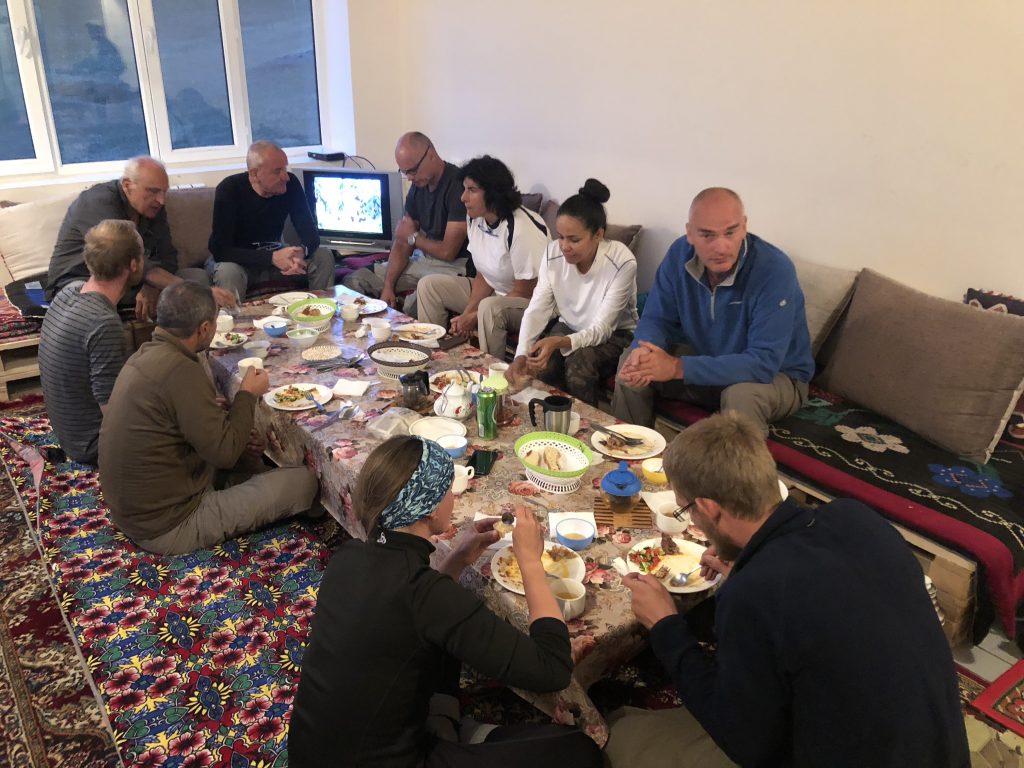 The day before we crossed into China had been cloudy and a bit wet so I had no expectations for the China crossing day other than a fast run to the border 70km away.  Nature had other ideas, the rain overnight had cleared the air and we woke to a crisp blue blue sky and the most amazing panorama of freshly snow covered mountains, this was the view from the house we saw first thing, the peak is Mount Lenin, which is the fourth highest peak in the old soviet union and it was a lovely view to wake up to. 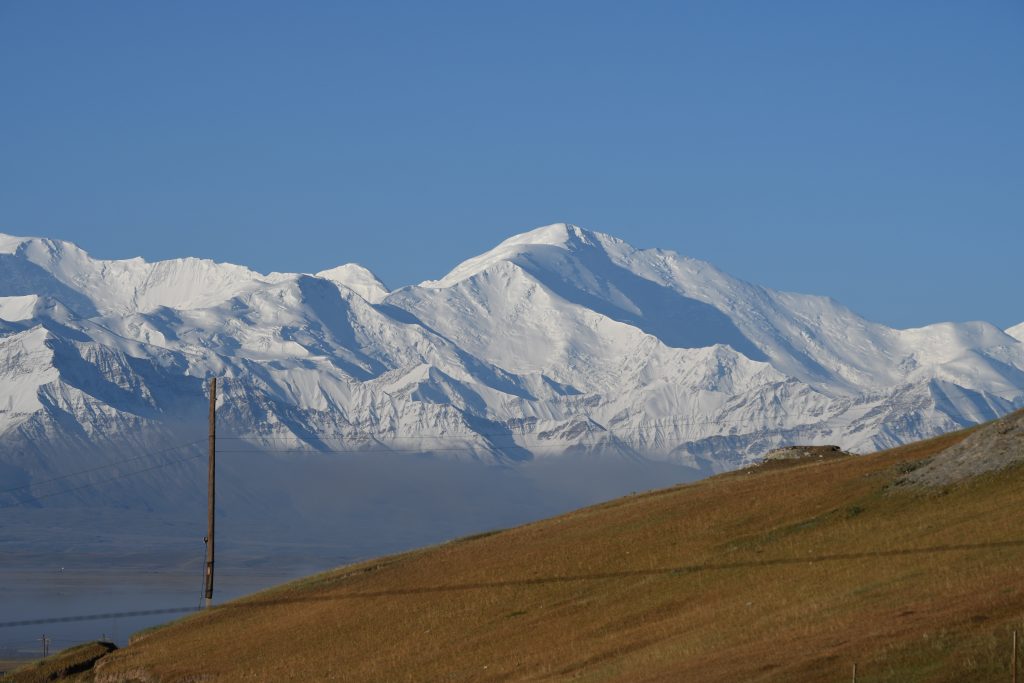 As we drove towards the Chinese border the views just kept expanding, we really had the feeling we were on the roof of the world for a few magical hours, we had an extra passenger Paula as she had injured her foot in an accident in Uzbekistan so found it difficult to ride for long periods, I think she is working on her husband to travel the next time with a camper instead of a motorbike! 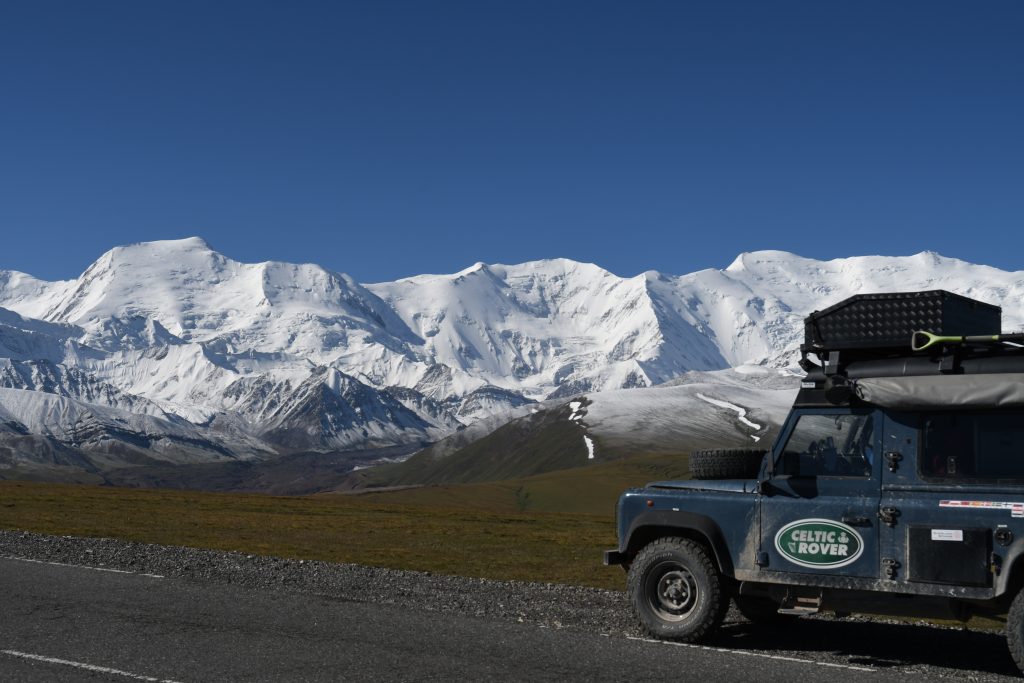 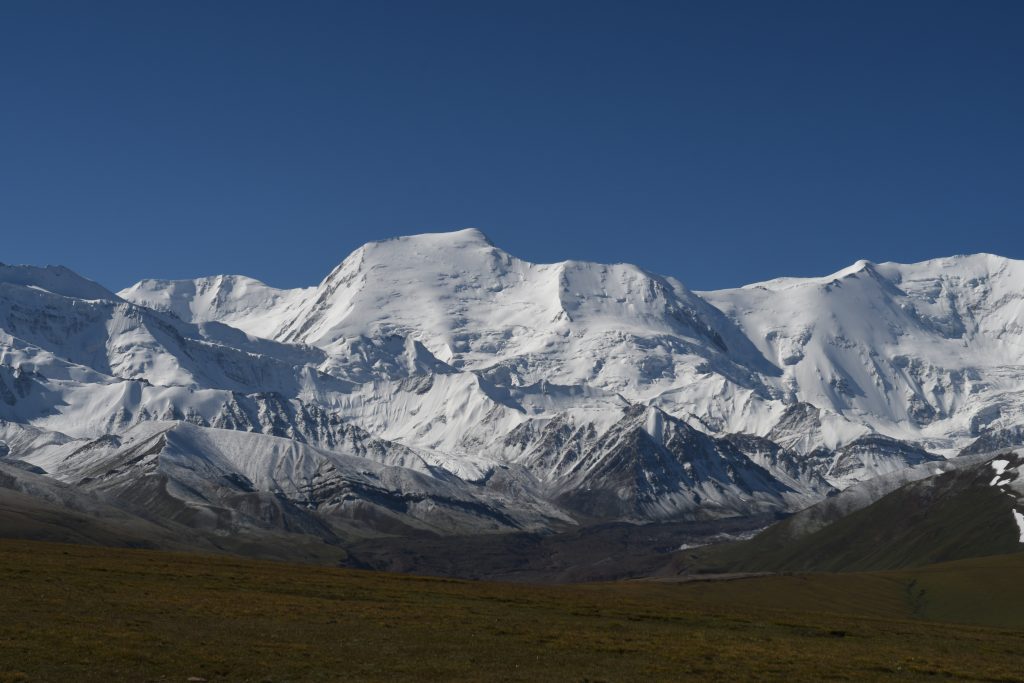 After an hour we arrived at the border of Kyrgestan here is our group going through the simple formalities of leaving that country, the border posts are actually about 5okm apart so it was strange to be in such a big no mans land. 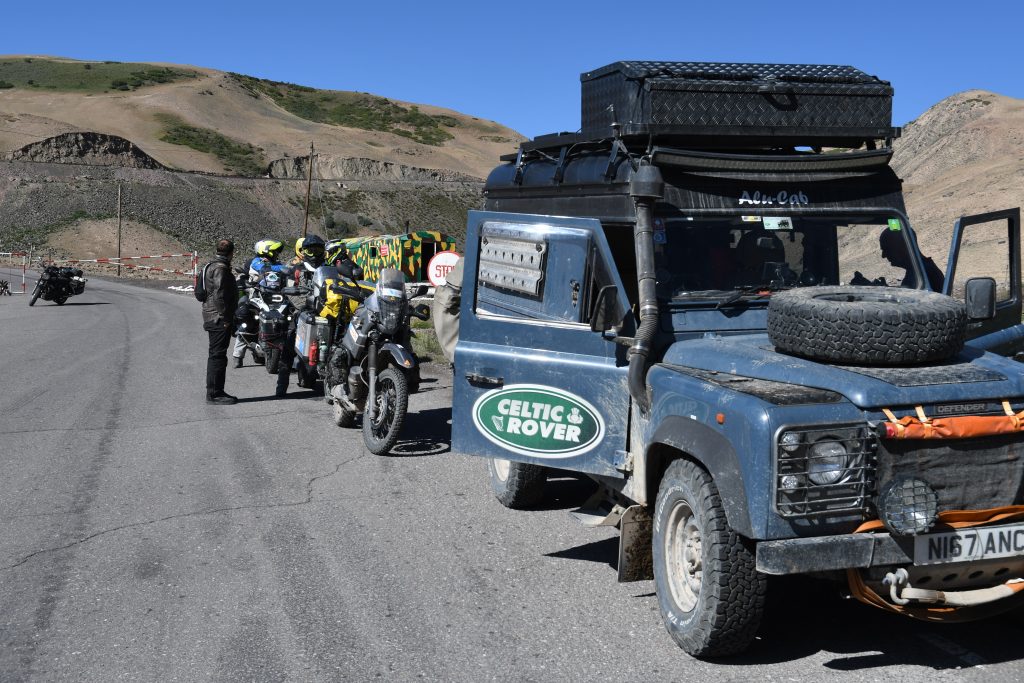 Finally we made it to the Chinese border at about 11.20 in the morning, only to find they were closed for lunch for the next three hours, that set in motion a pattern – in the end it took us two and a half days to clear the formalities in the Chinese border, but that’s another story ….. 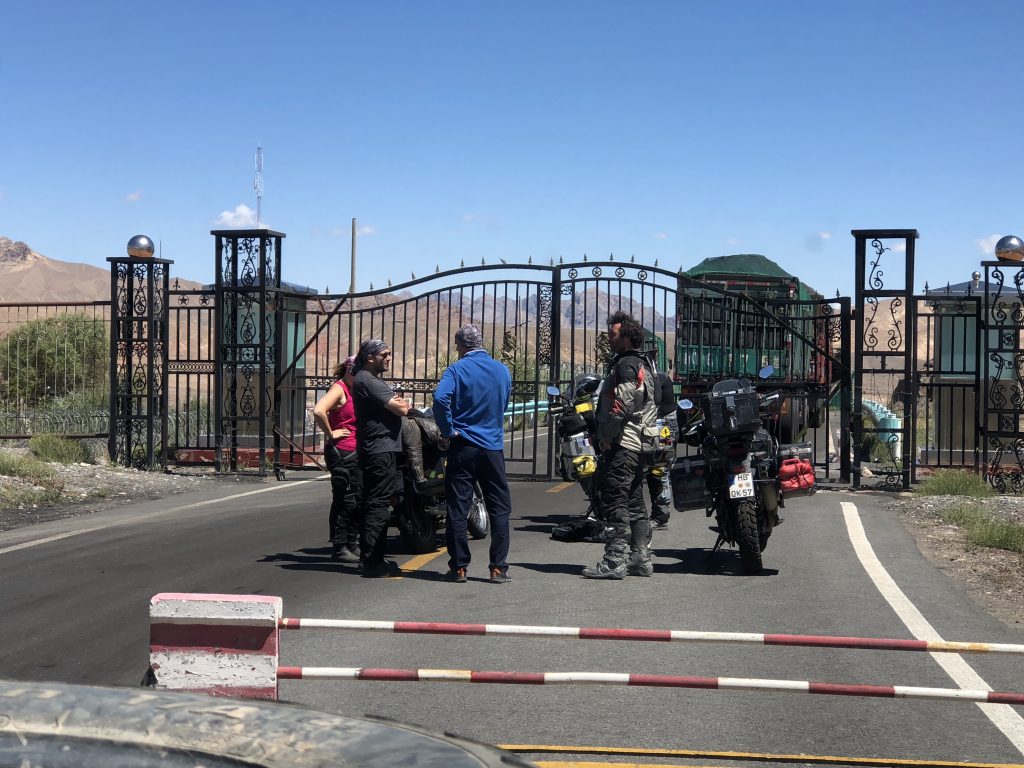 At least with Nelson acting as the mother ship we were able to make coffee for everyone and provide some shelter from the sun for the whole team !

Previous The Pamir Highway
Next China, Pakistan and the Karakorum Highway