When a Mountain lands on the only road

Today I set off from Katmandu on the first leg of my solo journey home, at least as far as I have planned its solo until Istanbul when I will pick up my godson Chris for the run to Munich and the Octoberfest.  I was in good spirits having been rejuvenated by seeing the family for a few weeks, although sad to see them go, and part of me simply wanted to get on the plane and be home to nice coffee and my own bed for a change, I feel I am on the way home now and have a clear goal with all visas in place.

So knowing from coming into Kathmandu that the road was heavily under construction for the first 30km or so, and traffic slows to a start stop, que jumping nightmare, I got up bright and early and was on the road at 6am while most of the city was asleep and the roads were much quieter than they would be by 9am.  I did not look at the news, I would not have understood it anyway but just jumped in the pre-packed car, waked the night watchman and set off in the dim of dawn.

This seemed to pay off well, I quickly overtook some early morning buses and found myself “flying” at 50 or 60kph along the lovely road that links Pokhara and Katmandu, really the only sensible road in the centre of Nepal.  The plan was to turn south to the Indian border on the main road that links up about 2/3 of the way to Pokhara.  By 9am I was approaching the junction with about 20km to go and suddenly I was faced with a stationary line of trucks.  Being well mannered and trained I dutifully stopped behind the last truck and gradually more trucks stopped behind me, nothing was coming the other way…. 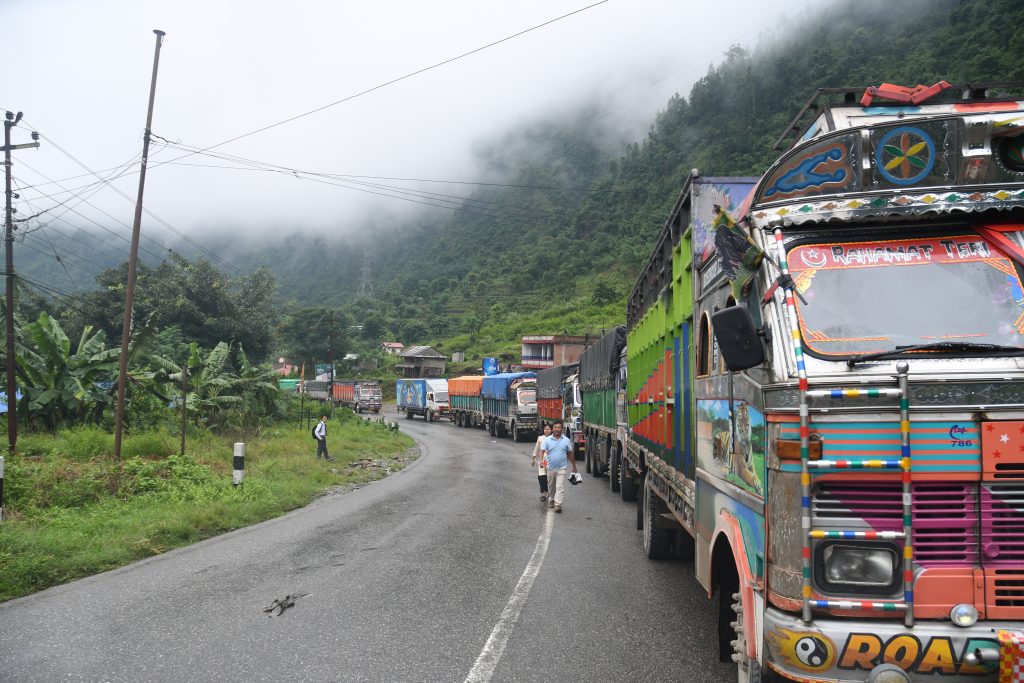 So it seems that overnight in the monsoon rain a big part of a mountain had landed on the only sensible road to India from central Nepal and the road was totally shut, in fact I was later to learn that the road south was shut for 13 hours despite a full team of diggers and bulldozers working on it flat out all day.  The road on to Pokhara was still open, it had only been slightly blocked, so southbound traffic was queuing up blocking the road in both directions. Those of you who have driven in India or Nepal will know what happened next.

Some clever chap in a small car decided that he would just drive up the “empty” side of the road and squeeze in further up the que which was now about 20km long, others seeing this decided it would be a good idea to follow him, bus drivers seeing this decided that they would get in on the action too, eventually after about 50 or 70 cars and buses had gone past I felt that staying with the trucks was clearly not the way the game was played, and followed a bus up the outside lane.  I reckoned that the bus would have more trouble than me slotting in so I gently drove from space to space with a honking line of locals behind me!

Now it does not take a genius to realise that this was going to end in disaster, but the local way of looking at things is that the disaster will for sure happen, but they will shuffle around work it out and in the end be much further up the que than if they had stayed put and let the oncoming traffic from Pokhara run freely once the minor blockage was cleared.  So it happened, we were all stationary both lanes completely full sometimes three across, when the blue bus below, leading the charge of traffic from Pokhara came down the road with its passengers clearing the way in front of it. 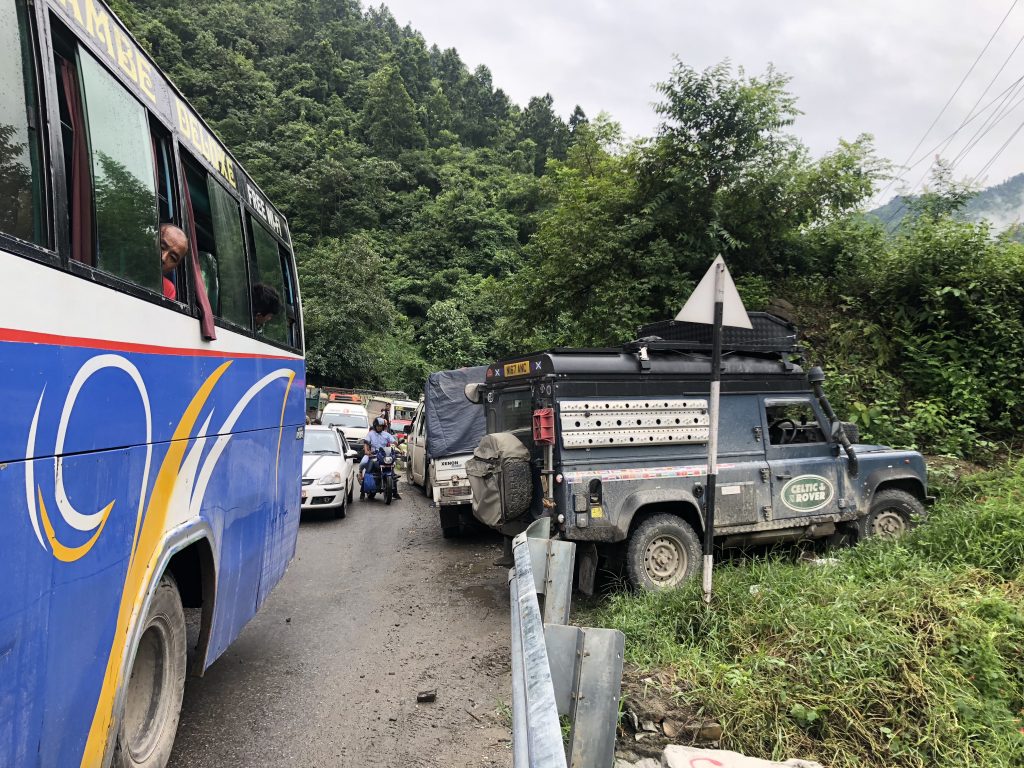 Thankfully as you can see I had kept a careful eye on “escape” routes for Nelson and could nip up a small embankment with my low ratio gears and smugly get out of the way. I felt I had balanced not being a dope with not blocking the road quite well !

I had by now been chatting to the locals who reliably informed me that the landslide was a really bad one, the que was already 20km long and we would be there for a long time.  At this point the sensible thing was to turn back and come back another day, as I was close enough to the end of the que to escape onto the quiet roads back to Pokhara, so I did a quick five point turn from my hiding place and followed the bus, as you can see it had a appropriate inscription on the back.

It took the bus, which its mega horn blaring, and a little army of road clearers and organisers walking ahead, about an hour to shuffle through the small amount of traffic which had piled in behind me including buses, lorries and tankers as well as cars! 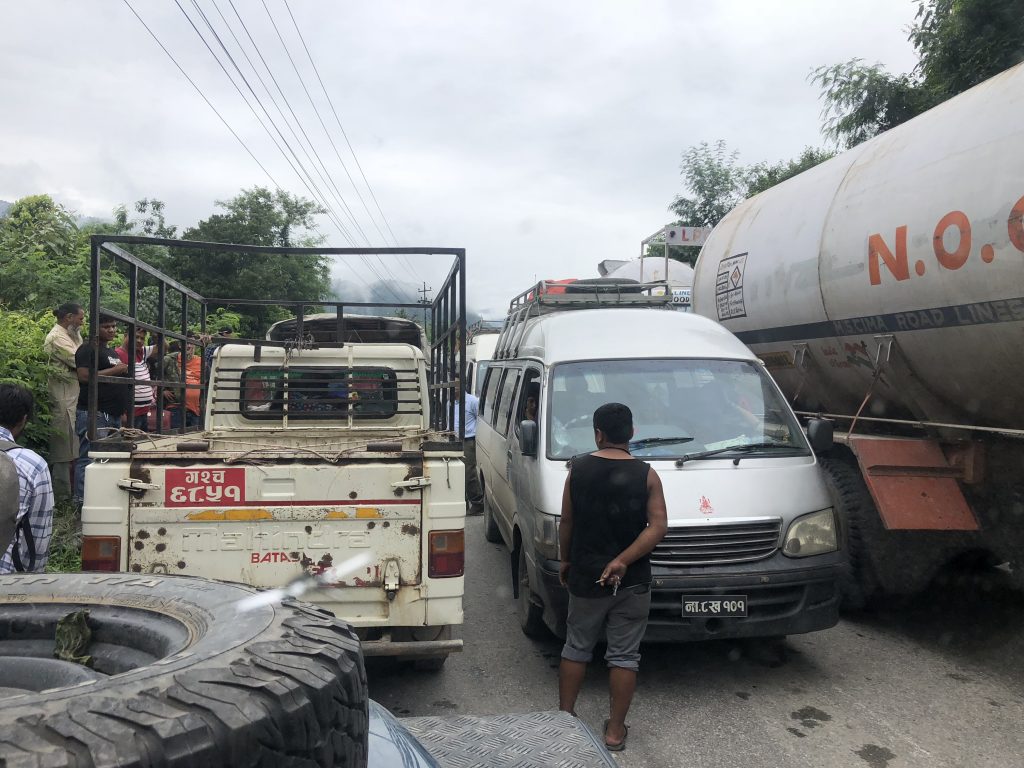 As I was tucked in three behind the lead bus I got on the clear road to Kathmandu for the second time that day, and was able to zip along quite quickly, in my stationary time I had read the maps and saw that there was a mountain road which ran more directly south from Katmandu, it looked more twisty than the main road but still it was only 11am and the twisty part was only about 70km.

Well there is a thing about being in first and second gear in a Landrover, that means you are doing about 10kph, so 70km takes 7 hours and that is what happened, as you can see below, even though I could make progress along the road every few minutes I would come across a truck going the same way or worse a bus coming the other way and we would have to squeeze past in the mud or take turns on the narrow bits (I did not take photos on the narrow bits or rough bits as concentration is needed not to slip off the road, not joking there were three recent wrecks on this road I passed) 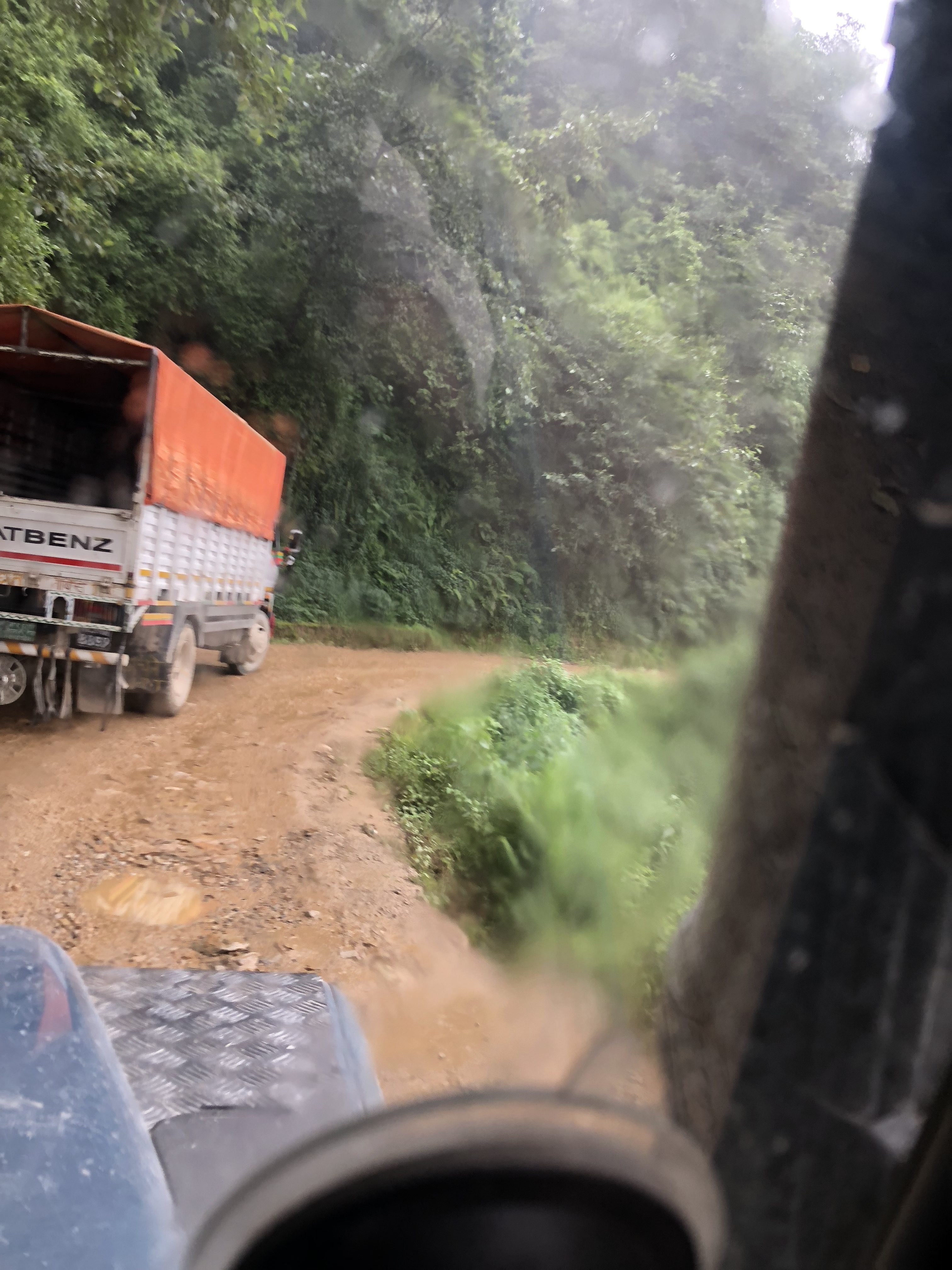 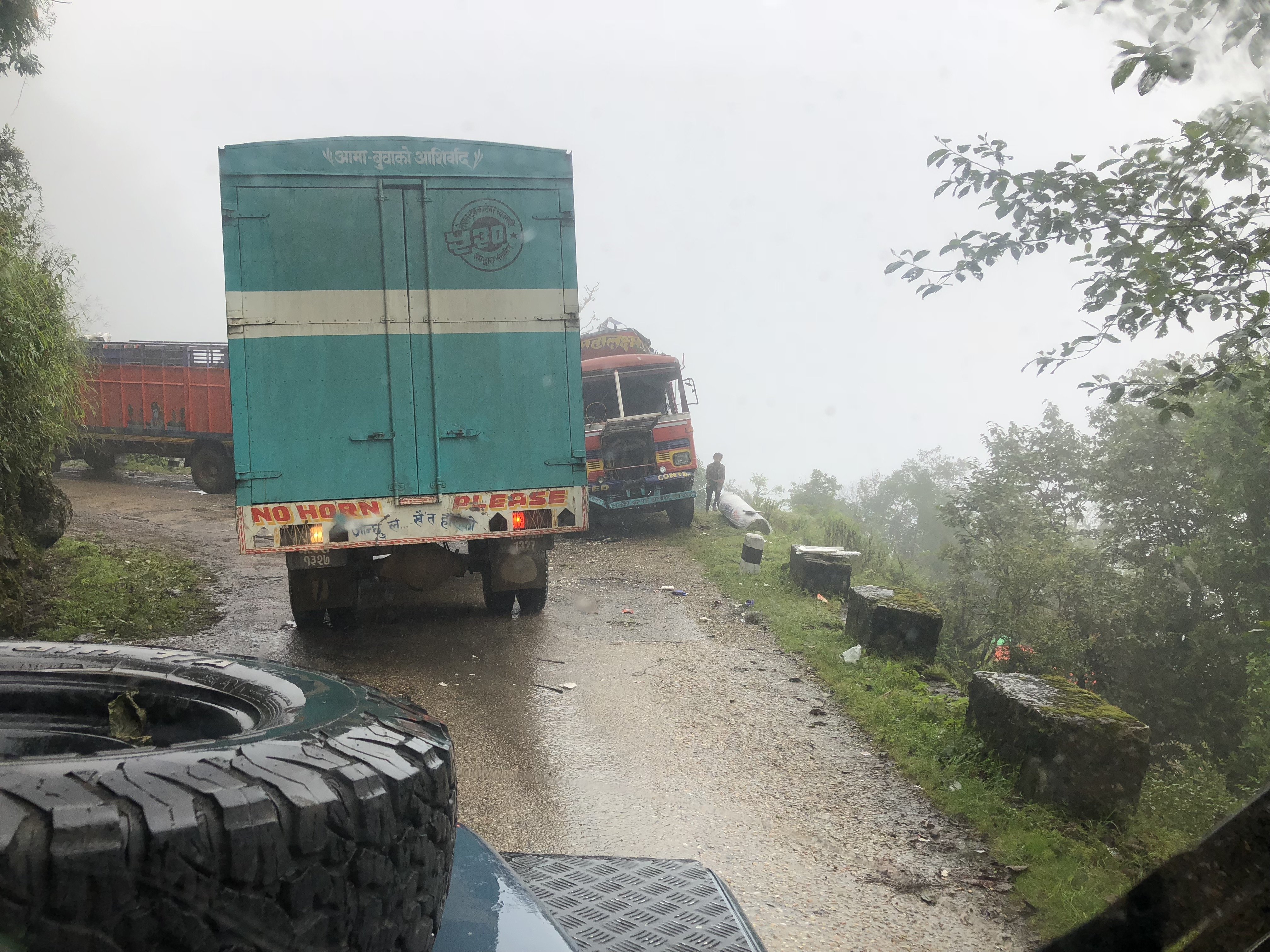 The road was quite spectacular but it was hard to appreciate it while trying to navigate over the horrible wash outs and small landslides as the rain poured down and the time ticked away.  There was no where really wide enough to stop so I kept myself going with chocolate and coke, probably putting up my chance of diabetes with my diet on this trip!  I did manage to capture a nice photo or two on the quiet bits of the road just out of the window of the car while I was waiting for a bus to navigate a tight corner. 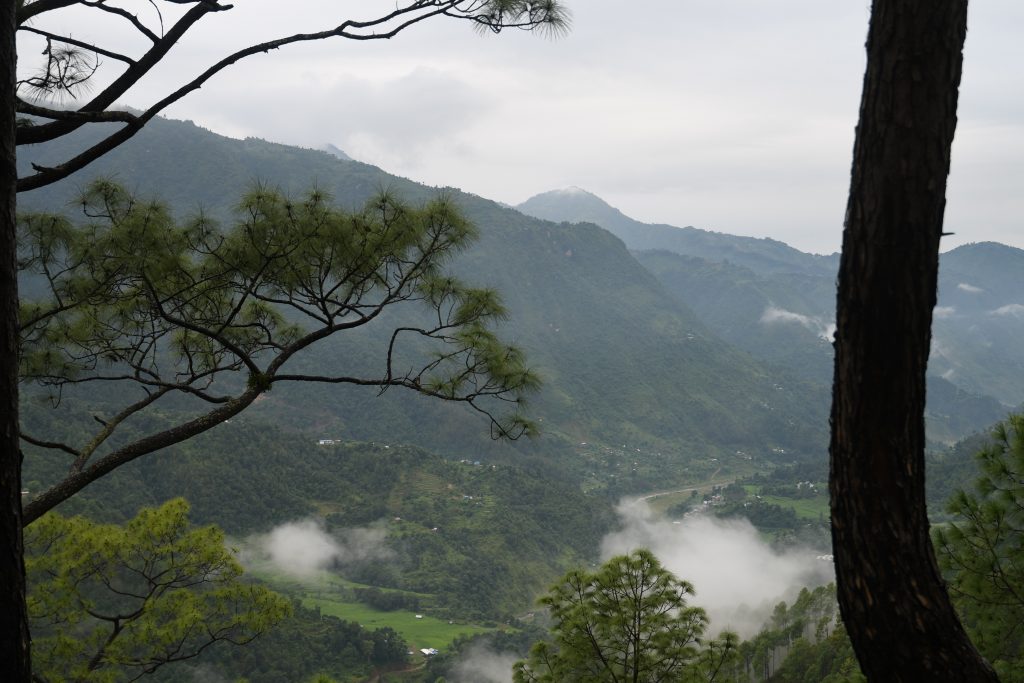 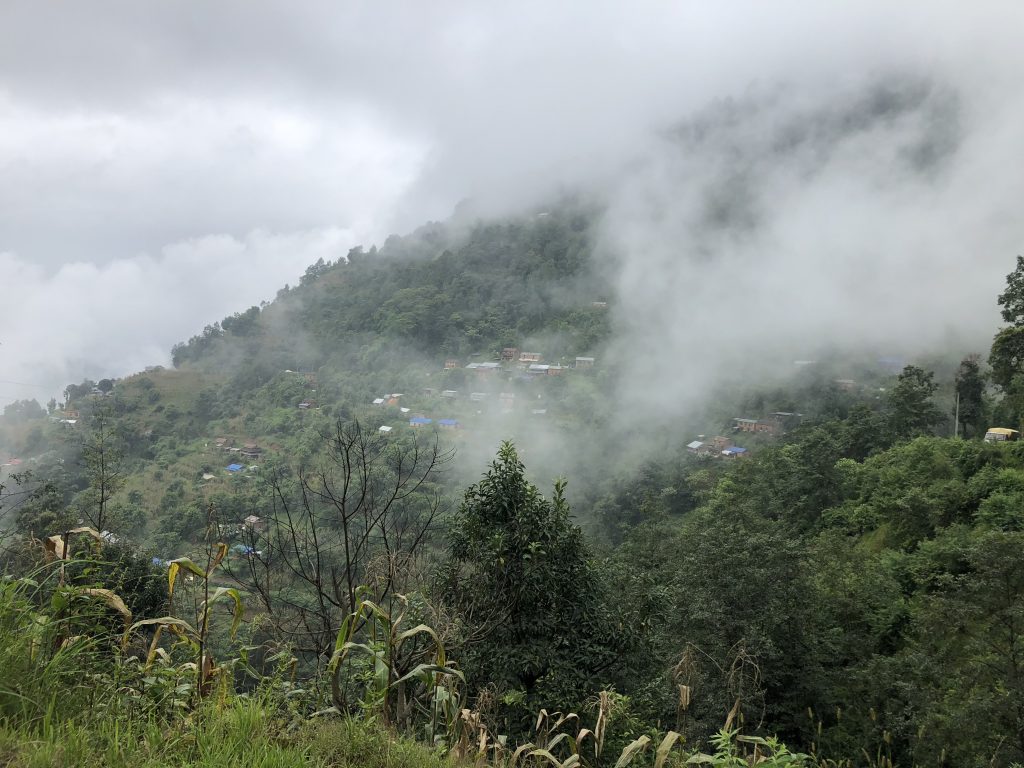 All this low ratio mud plugging, while actually a good challenge for the Landy and myself, meant that I got off the mountain in the growing darkness with 200km still to go to my hotel…

The smart thing to do would have been just to pull over and make some dinner with my emergency rations, but I was on my own and had been stationary for four days so I felt that I was OK to keep going, looking back on it now that was a poor decision but in the end I made it by 11pm having been driving since 6am sustained by Coca Cola and chocolate !  Now any overlanders reading this should for sure not make the same mistake, I got away with it but really it was not the right decision.  I made it most of the way by following a big bus which seemed to be on a mission to get to the border, thankfully by following it with about four car lengths between us I could see when he braked for or cleared the cows, potholes, unlit cycles, unlit vans and trucks, and pedestrians out of the way and I followed in his wake, so to speak.

Finally I got to the place I had booked for the night at 11am to be welcomed by surreal dancing girls and a casino as the cheap hotel I had spotted near the border (its still very hot and wet to stay in Nelson and I knew it would be a long day) was actually a gambling haven for Indian folks !  They were quite surprised to have an “ordinary” guest and the American manager even took a picture for their social media. 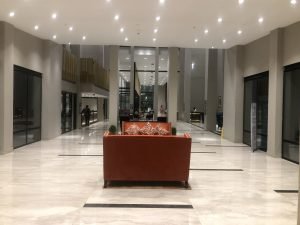 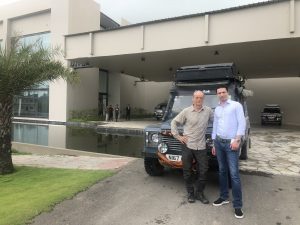 So all is well that ended well, but next time I think I will just drive back to Katmandu and wait for the main road to open, minor roads in Nepal, in the monsoon, are not a realistic option.

Previous A meeting of explorers
Next Land Rover Overland Katmandu