An evening with Mr Vali

Mr Vali is a 65 springy energetic Iranian man who runs a homestay in Mashhad. A homestay is pretty much as you would expect from the word you go and stay in his house, more accurately his basement, and you get to join his family for tea and chat. I thought after the bustle of the park the previous night that a quiet homestay would be ideal.

Finding Mr Vali’s place is tricky until you do the obvious thing and just ask a local once you get close, then it is easy to find the narrow side alley and the unassuming metal door with the small sign “Vali’s homestay”

I had not made a booking, it is the low season here, probably because the Iranian people are wise enough not to travel in this heat, so I am guessing he will have a space and I have heard reports that he allows guests to stay in their cars as I like to do. This proves to be correct and actually I am the only guest that day so all is well, we negotiate 5€ for the use of the clean shower and bathroom, the internet and the shade of his nice cool basement as Nelson fries outside in the heat. As you can see it is very basic but comfortable. 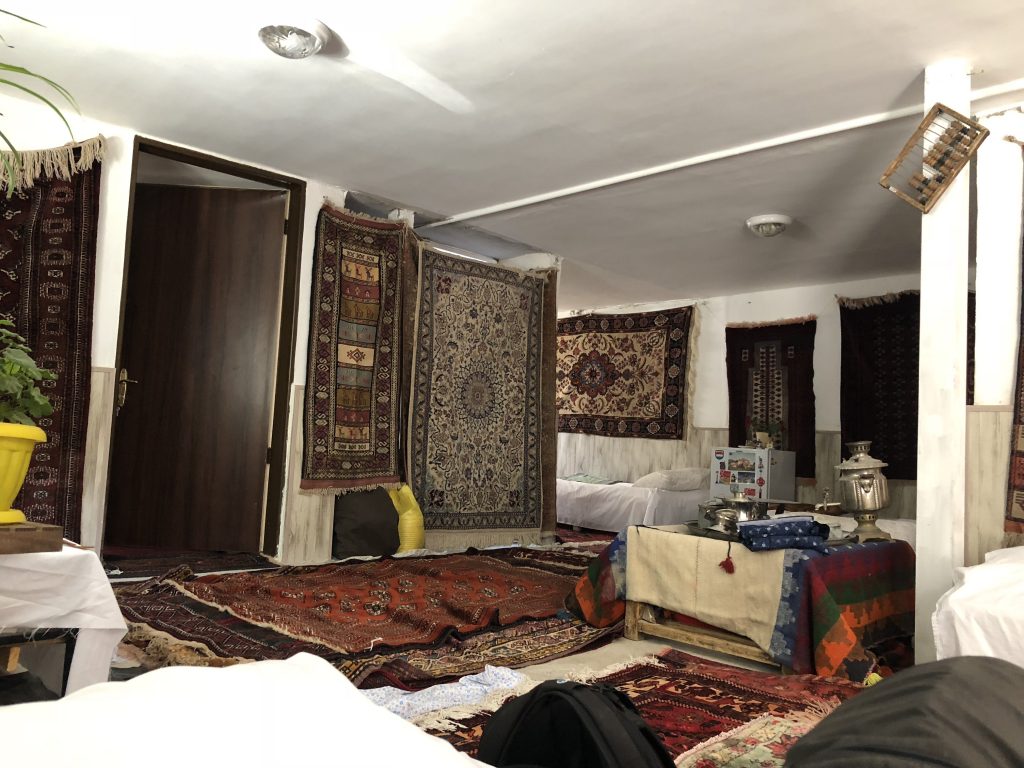 There was a nice supermarket nearby so I went along to stock up for the Turkmenistan desert runs over the next few days, even found a few nostalgic mars bars that I popped in my bag along with local bread, fruit and milk which I hope will last in the fridge if I improve the ventilation. I have been forced to drink black tea and coffee on occasion due to running out of milk in the heat, sweetened its not too bad really and makes more sense than trying to keep milk in this heat.

As I came back from the supermarket to the car I saw four young men loitering around the car, leaning on it and chatting, immediately my subconscious hackles were up I seem to have a reaction to people touching the car, looking does not bother me but touching seems to set off a protective reaction. I tried to push this down and offered a friendly hello and a handshake to the guys but was careful to keep the doors of the car locked, they gathered around me asking questions in Farsi but I shook my head and said “no Farsi, no Farsi sorry” carried on with opening one door and putting my shopping in the truck. Eventually one of them got his google translator to work and it said – “I want to see the papers of this car”, I carefully locked the car and turned back to them drawing my own translator out of my pocket in a John Wayne style maneuver, at least so I thought ! In turn my translator said “but I do not know who you are, why should I show you anything”, followed by “ if you are policemen please show me your identification” one guy produced a kind of warrant card (it turned out they were policemen but some kind of local religious plain clothed policemen). At this point I decided safety in numbers so I suggested going to the homestay and having the owner translate, just with one of them, and I would take my papers.

He agreed once we had sorted out how far it was, and if he would take his car, and Mr Vali’s daughter was able to translate for me, finally all was well. The main problem I have in Iran is that my visa expired that very day, which is fine as the visa is for the day up to you enter Iran, you then have 20 days from entry before you have to leave. Now I know that, the customs officials at the border know that, but the local policeman on the beat just sees the date of expiry and thinks you are overstaying, so I have to show them the entry stamp and watch them count on their fingers when I have to leave (two days before I need to) and then check the Persian text on the visa again in case I am pulling a fast one. Finally all is well. I walk back to the car with the, now confirmed, policeman and he says sorry Mister and I insist that its no problem to check and we are all friends, they screech off, Sweeny style for effect with lots of waves and I breath a sigh of relief.

After that little drama I was ready for some home cooking (5€ extra) and it proved to be delicious, chicken rice thick soup, bread, rice, salad, youghrt and meatballs in tomato and lentil sauce, the food was lovely but more interesting was the chat with Mr Vali, he talked at length about his travels to the UK before the revolution, the marriage of his son – which he called a modern style marriage in that the son and his wife had found each other (much easier for the parents he thought). His talk turned to how he had had a number of offers for his daughter who was just about to graduate, to have one or other person as a husband but so far no deal had been reached. He felt that this arranged marriage was more stressful for the parents as they are responsible if things do not work out and there are still in this part of Iran dowry payments to be negotiated. It was a bit surreal to talk to this man about his daughter while thinking that my own daughters are of a very similar age. It seems to me that this old style way of thinking tries to get the basics right, family, money, job and security and then affection follows and our system seems to lead with affection and the others follow, some of my Chinese friends who have a similar system tend to think that ours is the more shallow and less responsible system which is an interesting perspective.

We talked about his business, the type of people who came to stay in his homestay and the price of saffron (as we drank saffron tea) as the night fell on his balcony sitting as one nearly always does on the floor.

I did not take any photos that evening, it seemed too intrusive to the discussion and I was quite tired but the next day Mr Vali, who is a historical carpet repairer as his main job, showed me some carpets so if you want a nice carpet delivered to your door in the UK for 100€ then here are some choices ! 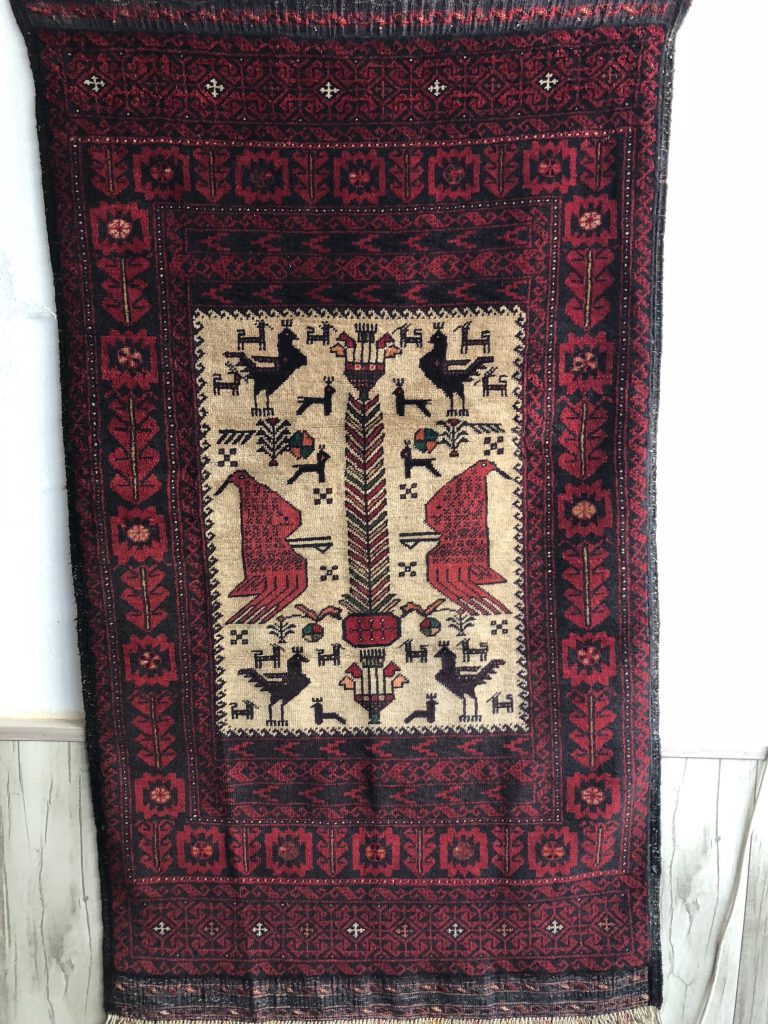 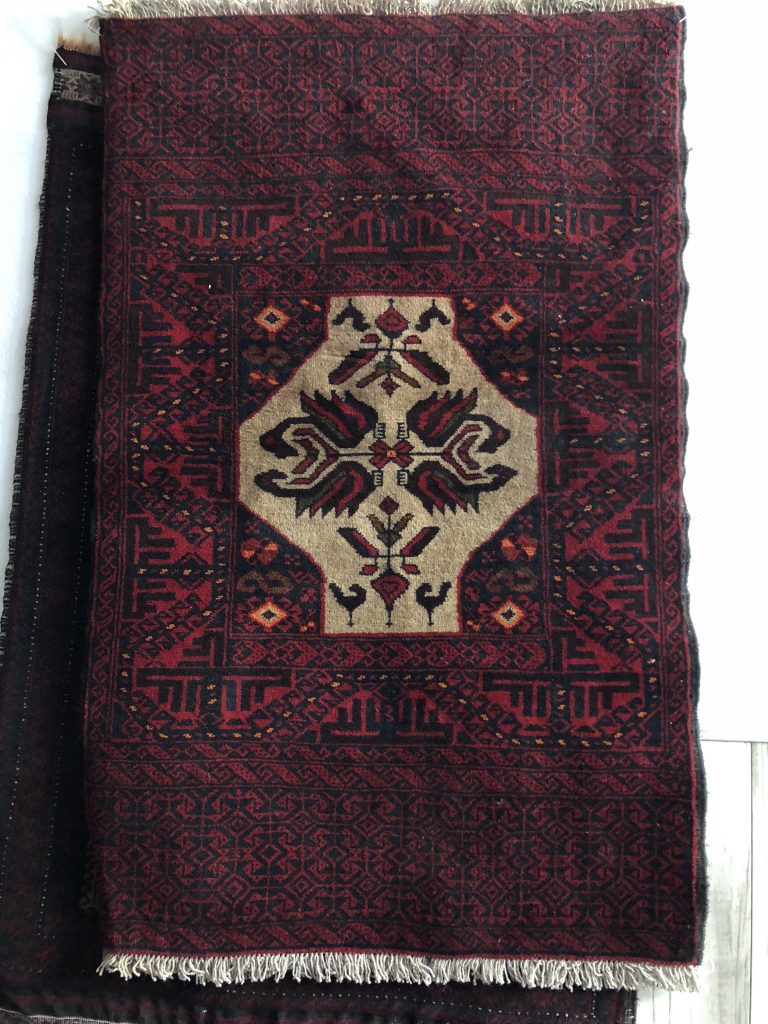 Previous The Shrine of Inman Reza
Next The road to nowhere, and not the Hotel California