The road to nowhere, and not the Hotel California

Today was one of those travel days that you just have to dig through and wait till they are over, mostly.

The bit that was good was on the way from Mashhad to the border at Sarakhs with Turkmenistan I found a lovely ridge that stuck out over the desert from a mountain range and it had a very small road on it, this was one of those tracks that just had to be done, and so it was, a little gingerly at times but we managed to get to the top and the view was spectacular.  Somehow the pictures in 2D cannot capture the scale of the drop off on both sides of the ridge and the expanse of the view but here they are anyway 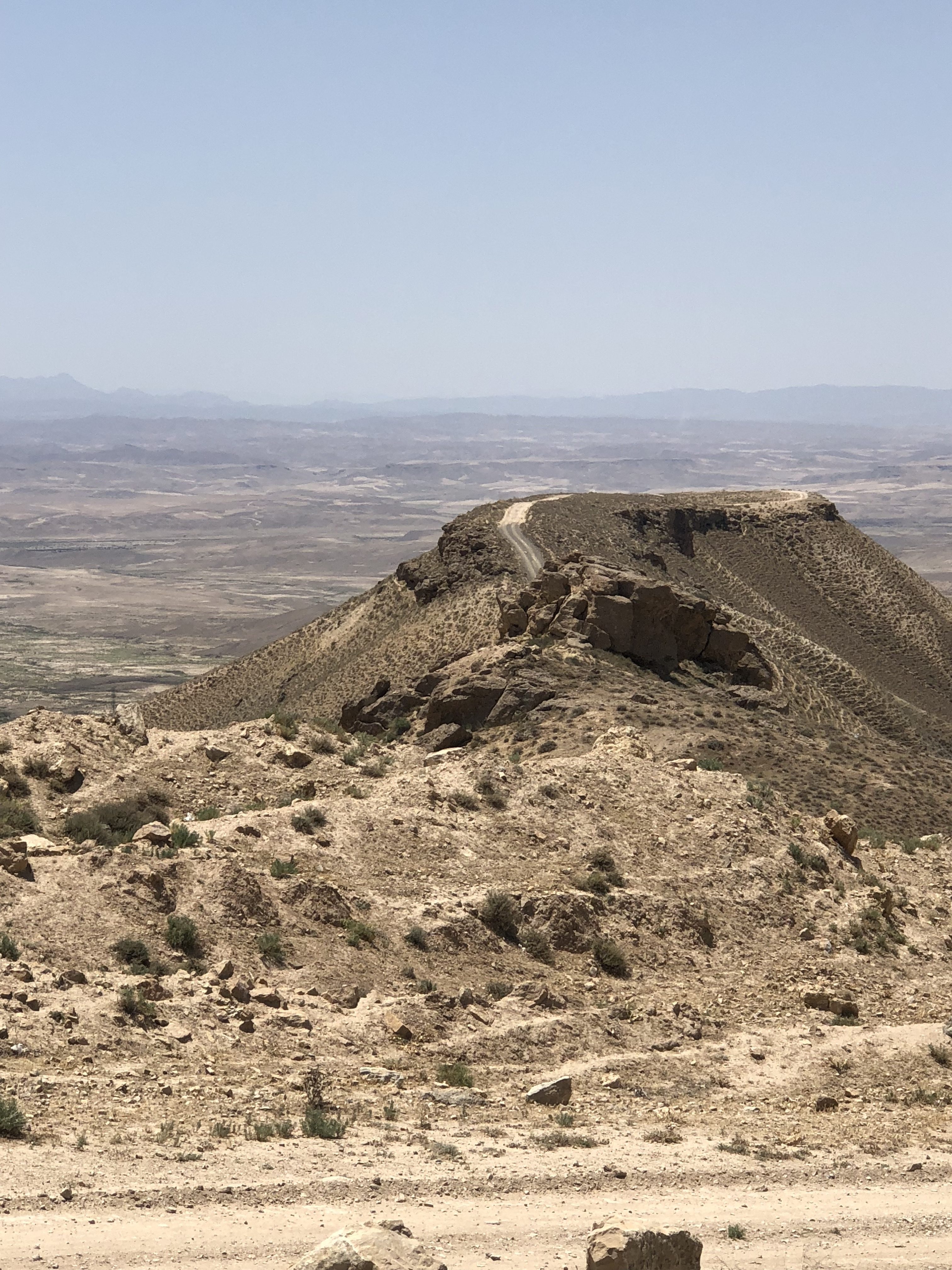 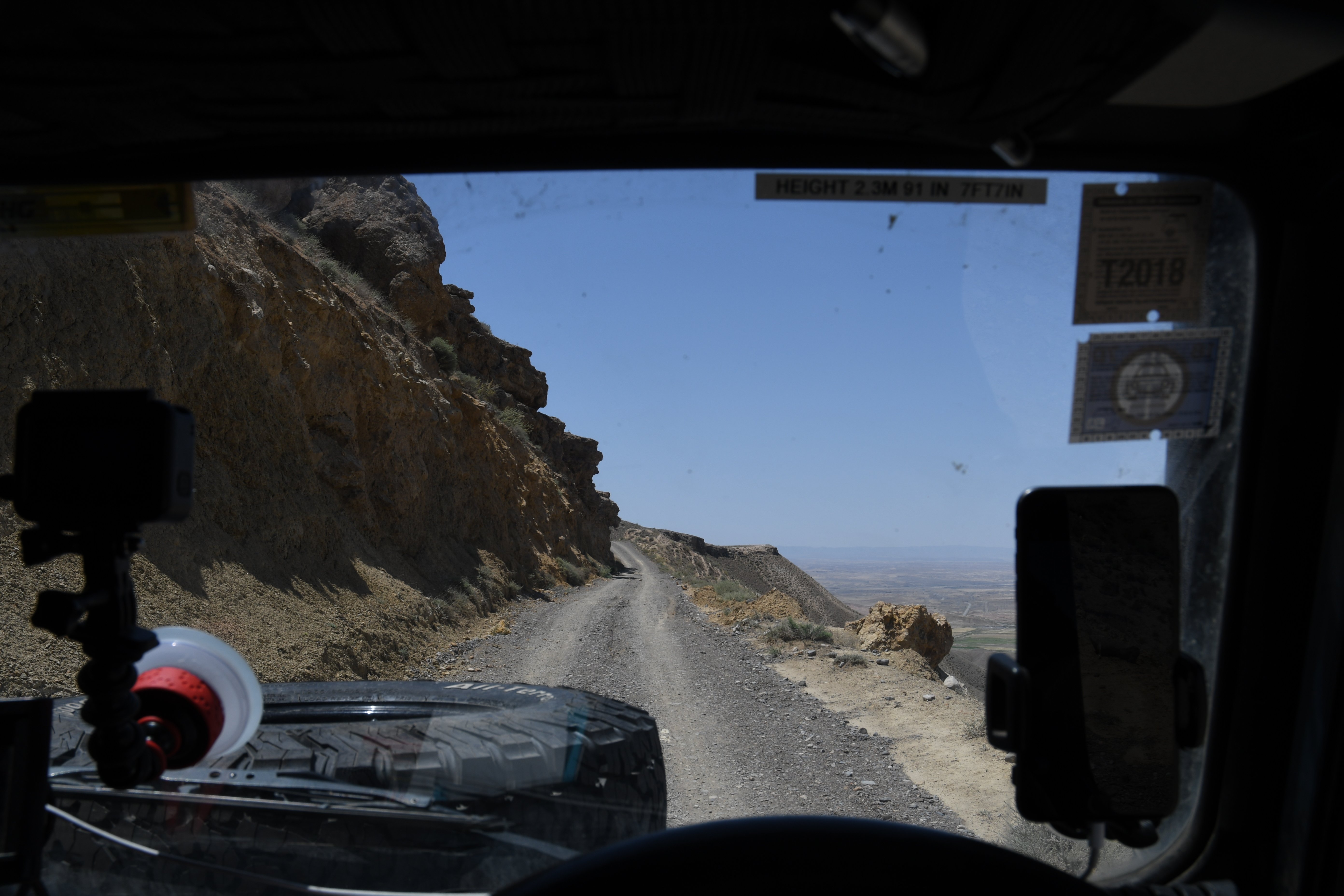 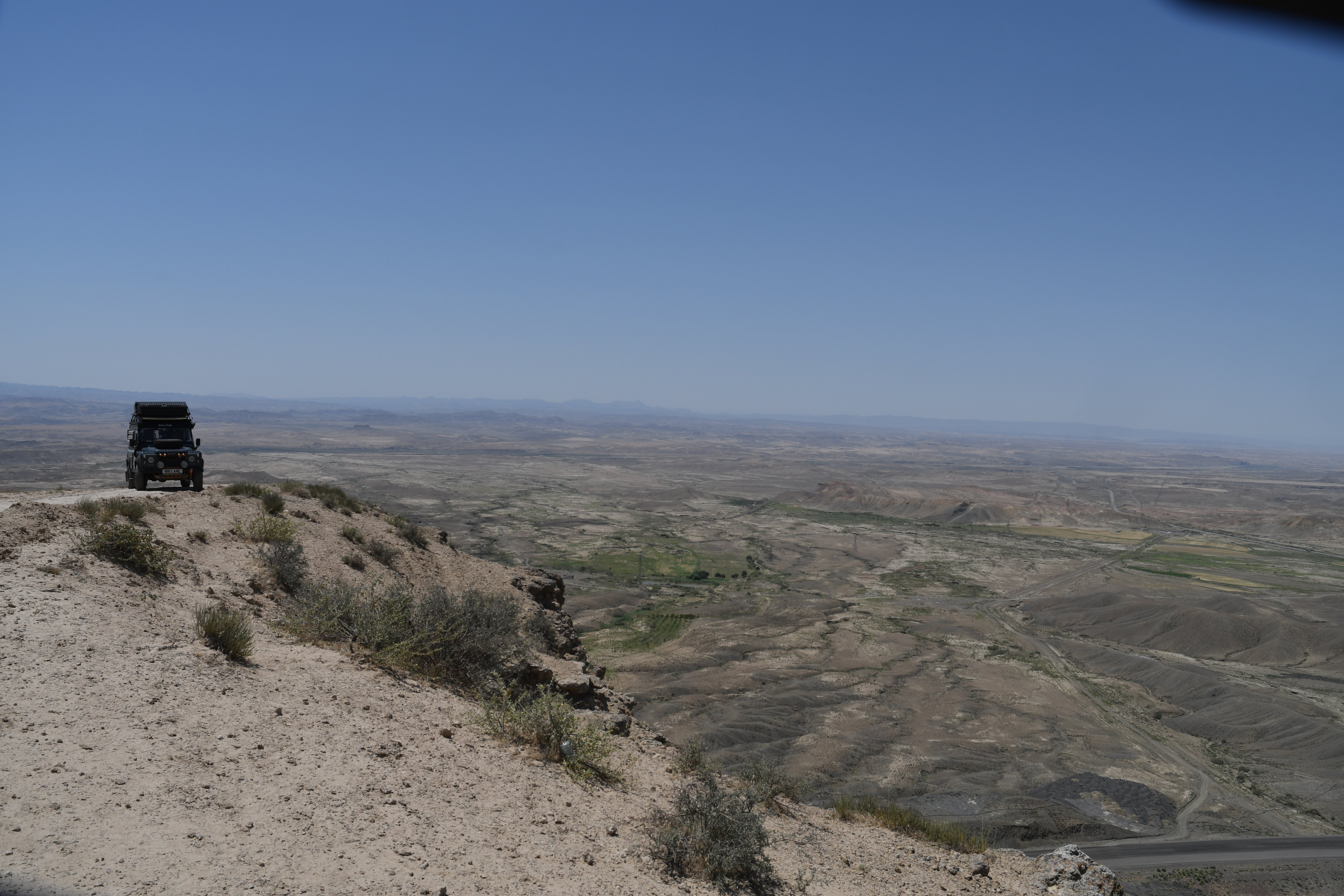 That was the good part of the day, I tootled along to the border knowing already that I was a day early, my tight transit visa through Turkmenistan did not start until the next day but I was hopeful to find a place to stay near the border so I could get across early the following morning.  Unlike most of my planning for this trip, in which happy coincidence and good luck have enabled me to make the most of situations the desert beat me this time.  The border crossing is in a wasteland of scorcing desert and the little town on the border is a two street affair with little shade and no really easy camping options, I had noticed one hotel near the border so in hunger and in need of escaping the scorcing heat I called in there.

Dinner was good enough to last me a day, soup rice and kebab a very typical Iranian dinner and not too expensive (about 3€) served on plastic covers with reflective aluminium foil underneath, an interesting look. 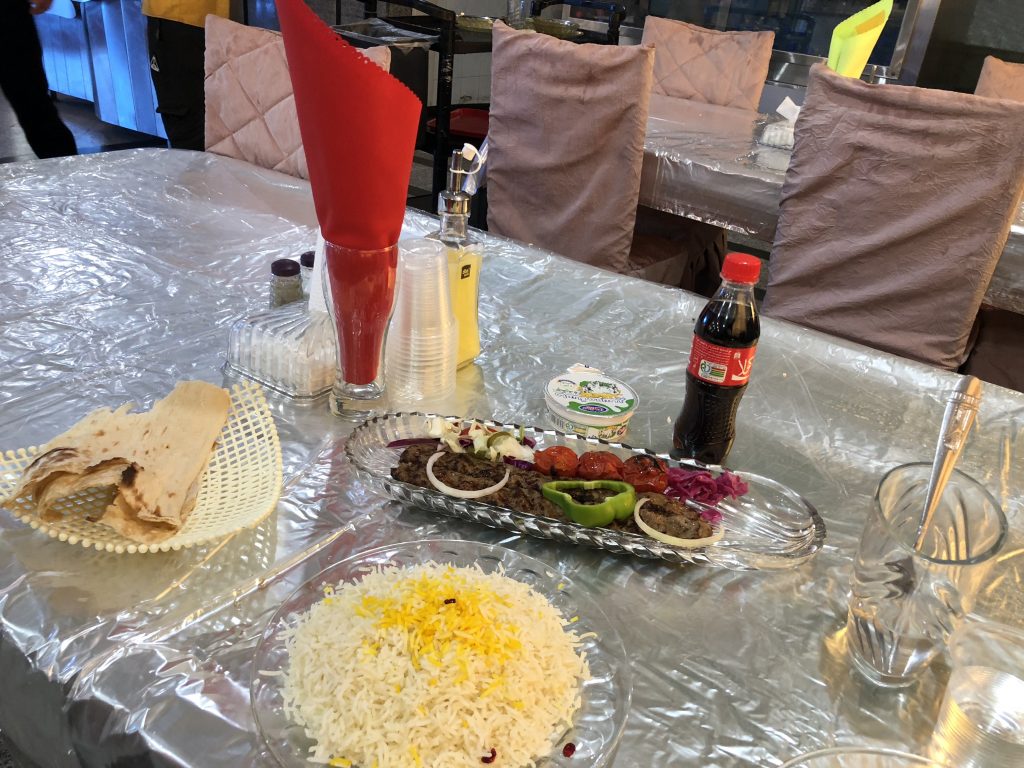 Happily fed  I thought I would try my luck as a restaurant customer to see if I could stay in the car park overnight.  This was rebuffed by the manager and I had to use my remaining currency to negotiate a shower and wifi deal with the hotel, which “could” allow me to camp in the car park, much haggling ensued as they started at 60 € for one night and finally after pleading poverty, and the intercession of a guy who turned out to be police, a deal was done for my remaining Iranian currency (8€) and I have a quiet lobby to sit in, a supply of tea from the friendly receptionist, and a room with nice shower for my trouble.  This is not the Hotel California even though it is in the desert, in fact its called the hotel Doorty which is funny but a bit unfair as it is basic but not dirty. 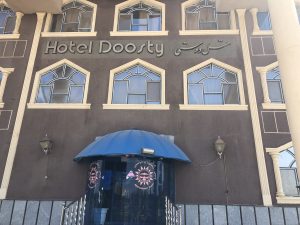 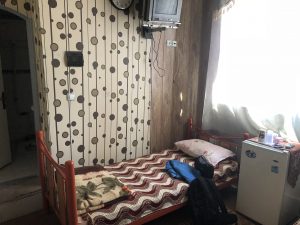 My landy continues to attract attention, this time it seemed to be the local special forces commander who called in to the hotel with some plain clothes police, I guess because when I was driving round the village I had gone past a barracks with guards that kept a close watch on me, and nothing much of interest happens in this town. I had to go through the usual checks and as usual all was friendly, and they were mostly interested in the machine.  I know he was special forces from his kit, not the usual conscript gear closer to US standard issue, everyone was being deferential to him as they were checking my passports etc and he had lots of stars on his shoulders.

I think my upbringing in Belfast during the troubles has been good preparation for this sort of thing, I take it as well intentioned and even that the fact they are checking me means that I am pretty safe, for other people not being used to being stopped and questioned so much it might be a bit unnerving.  Again by the end we were all friends, maps and photos have been shared and oddly I feel safer as I think the local police will once again be looking out for me tonight.

So I thought I was badly done by having a bit of a dead day (as you can tell from the blogging which has been achieved) but later in the afternoon I met a nice German guy who had cycled here, and his visa was not active for another four days,  so he was really stuck in nowhere Iran….I helped him out with a lift to the town so he could buy water and provisions and while there we met some locals for a chat so that helped spread out the afternoon.

The sun is setting now, and the football has just come on the TV so lets see what a night in the Hotel Drooty brings, Turkmensitan in the morning !