The Shrine of Inman Reza

The reason that 90 percent of visitors come to Mashhad is not the wild park camping scene, that is something to experience, but not a feature to draw Muslims from all around Iran and abroad to pilgrimage in Mashhad. The draw for them is the holy shrine of Inman Reza, which is, as far as I can tell, one notch down from Mecca in the pilgrim sites of the Muslim world. A Muslim who completes the pilgrimage to Mashhad can add a suffix to his name just as those who have been to Mecca can do. I did read the story of the Inman Reza but I will not attempt to summaries it here, suffice to say he seemed to be a very pious and peaceful man caught up in wars between princes and eventually martyred as the king thought he was attracting to many followers, his body lies in the tomb at the center of the shrine here, it is considered very holy so only Muslims are allowed into the central courtyard and Mosque. 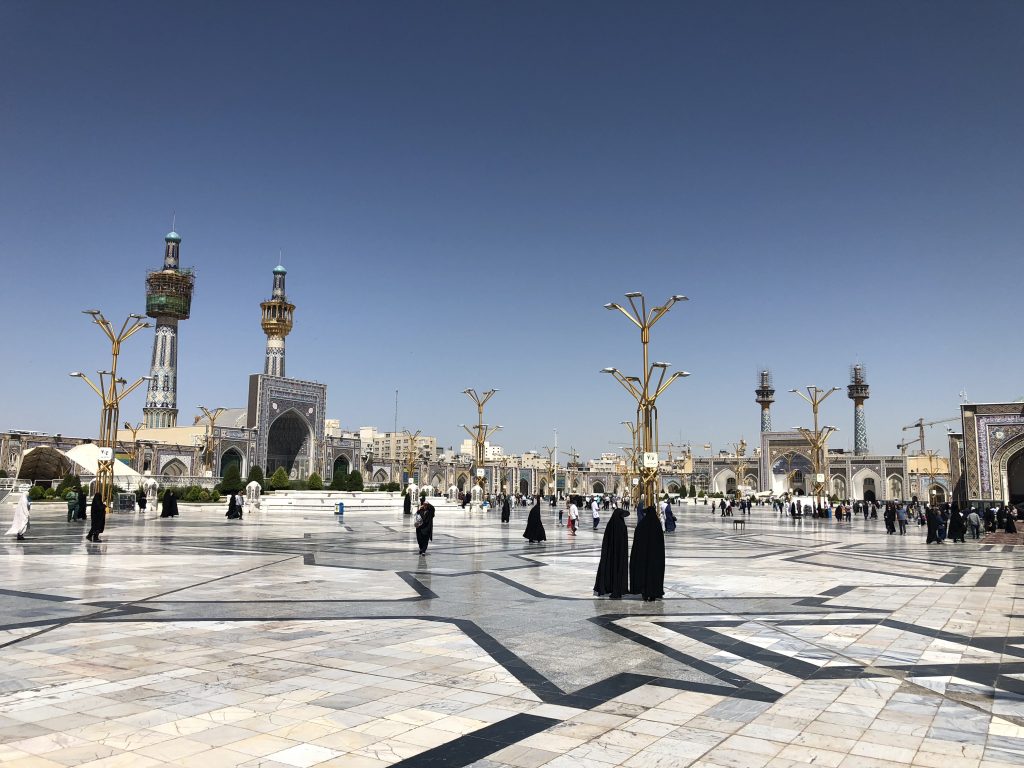 The fact that this is not a museum Mosque but a working and thriving community is illustrated in the photo below, I turned at the sound of some singing and chanting to find that a full on formal funeral was taking place right in the square with the body being taken to the shrine for a last blessing. 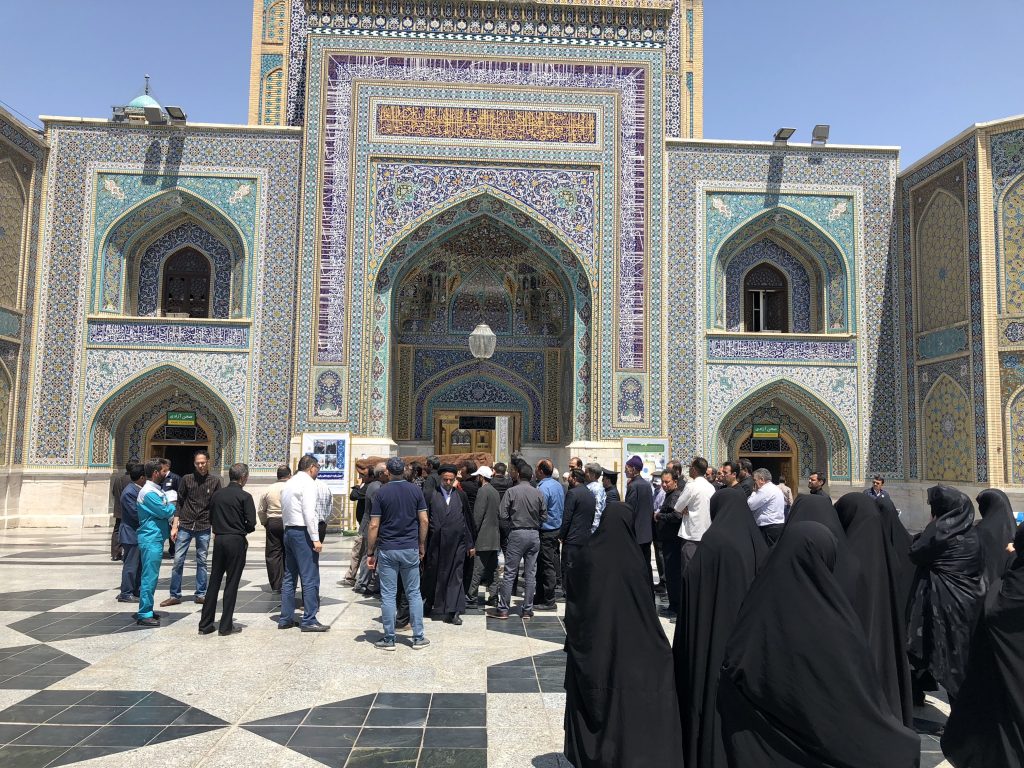 This is not a place like Esfahan or Teheran where you see an occasional tourist, I was at the Mosque complex (it is vast) for a whole morning and I did not see a single other person who looked like a tourist. That in part may explain why my presence in the park the previous night had caused such a stir with the locals, for many of them it was the first time they had seen an English speaking person in the flesh, so I was like the fourth attraction after the paddle swans in the lake, the ice cream parlor and the bumper cars for many of the families – the foreigner and his amazing “machine” as they call the landy was the forth attraction.

As I sat in the Mosque I reflected on my feelings about Iran. Despite a feeling of this being a really different part of the world, the feeling of being the lone foreigner, and the strangeness of the Mosque or the resonate call to prayer from time to time, I felt comfortable all the time. This is a really remarkable statement, when I think of how nervous some of my friends and family were about Iran, my own apprehensions before I came, and what I had seen on the news. The simple truth is that I never felt threatened in Iran at all, quite the opposite, I felt only a genuine deep rooted hospitality and openness from the people. I felt much more comfortable here even in the backstreets of the cities than I do when I am in many European and American cities as there seems to still exist here the feeling of a community that keeps an eye out for each other and knows each other. 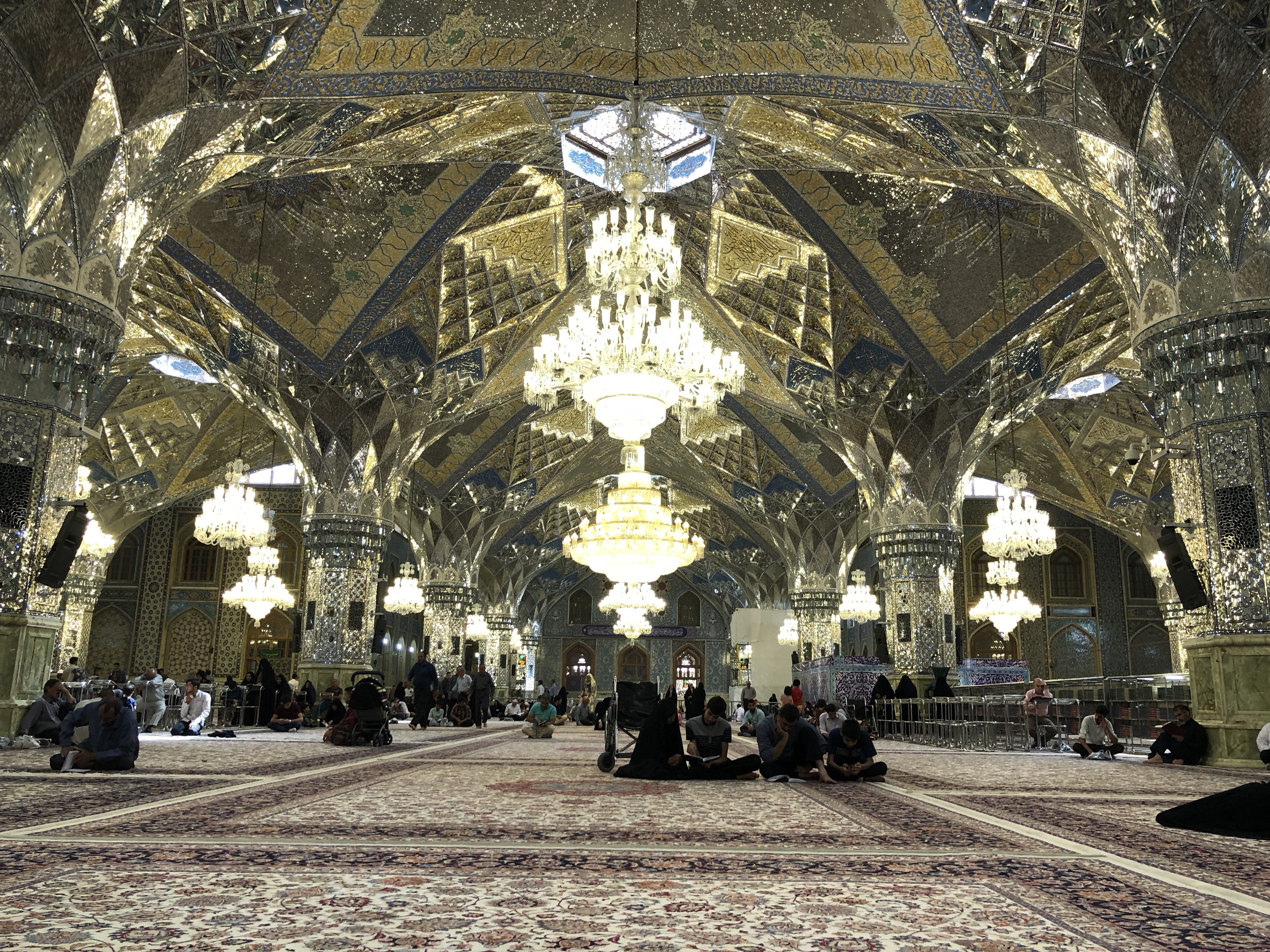 So it was again at the shrine of Inman Reza, despite sticking out like a sore thumb people were kind to me, pointed out what I was to do with my shoes, shook hands and said “welcome to Iran”. I was allowed into the mixed prayer hall in the Mosque, which is a massive colonnaded and carpeted area were people prepare themselves for the actual pilgrimage “moment” of coming face to face with the tomb of the Inman. This is a lovely space, people just sit down where they like, sometimes families together, sometimes groups of guys or women usually dressed in the black chandor as this is a very holy place for them, but young kids run around freely, people chat, read and pray all mixed up in a respectful but nice atmosphere.  There is a great deal of mirror used but always small pieces so that a person will realise that each and every one of us is all shot through with faults 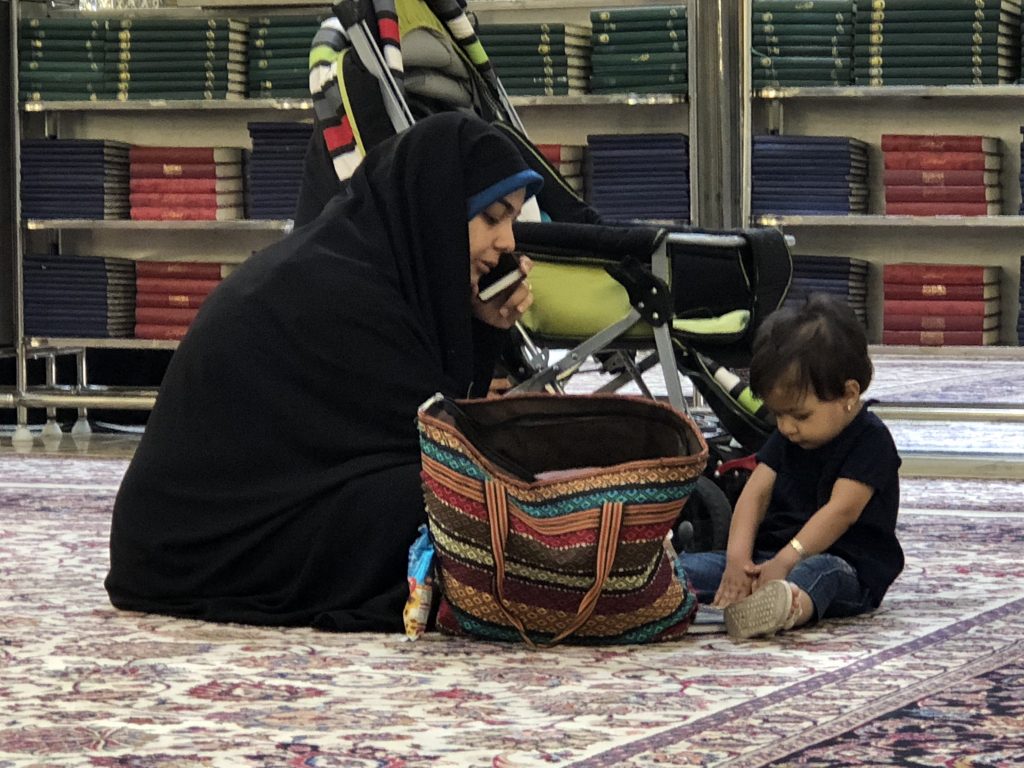 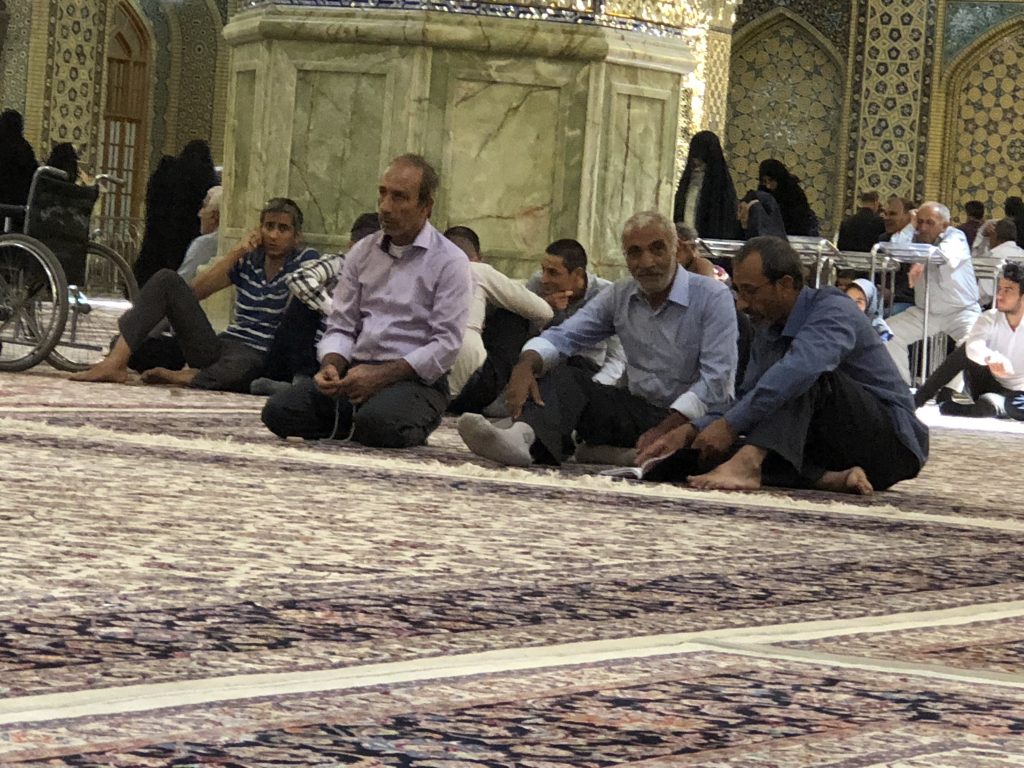 I sat in this space for an hour or more, just reflecting on my new impression of Islam and its ancient culture and traditions, in some ways unlike the Roman ruins and even the Christian Cathedrals which I also like to visit, the Islamic culture still seems to be a real and living thing – not that it is something I agree with specially – I am at heart a constructional liberal even ahead of being a democrat, there can be tyranny in majority democracies as our own history in Northern Ireland shows – but I am happy to have seen and experienced the reality of Islam and the vibrancy of its life in the ordinary people, I will add in below my favorite Mosque picture taken in Shiraz of two boys I watched play, unhushed, for 15minutes while others prayed and looked around, that was the surprising part, the essentially tolerant and family orientation of the reality on the ground of that religion. 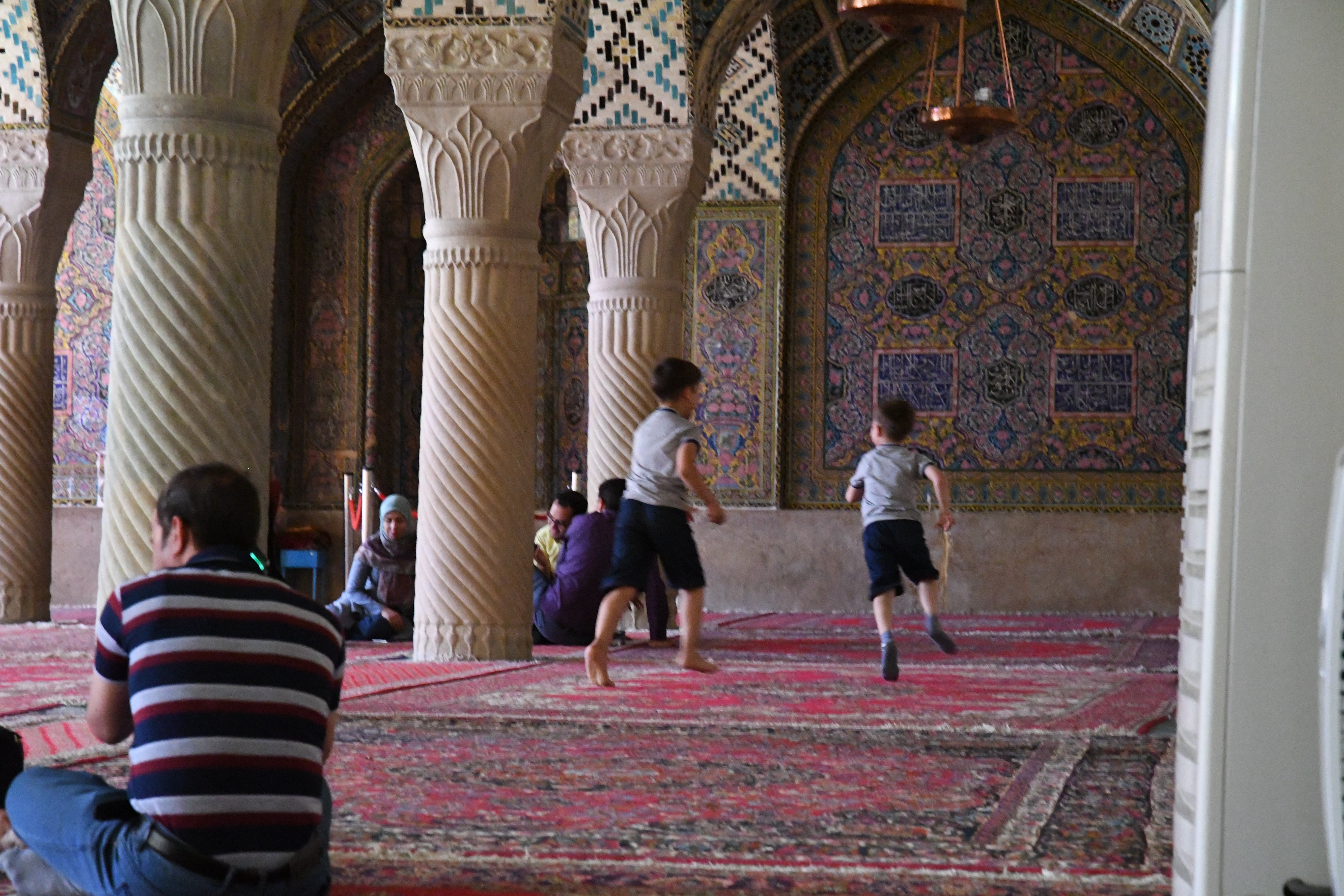