Mashhad – a little too much of a good thing

After my trek through the desert I had a lovely nights sleep in the cool air of the mountains, the fresh breeze through the side windows in the sleeping area was a welcome relief from the heat of the day. I had followed a tip from my overlander website to a nice park outside a local town, I spotted a tough looking track to the side of the park and headed up it in low ratio, it was pretty rough, which is what I like, as I knew that the locals could not follow me up the track in their Peugots (although it is amazing what they can go up without the benefit of 4WD, this road was a pretty safe bet as Nelson had bounced around a good bit even in low ratio), so it proved, and I had a nice peaceful night on my own in the shadow of the mountain as you can see in the picture below. 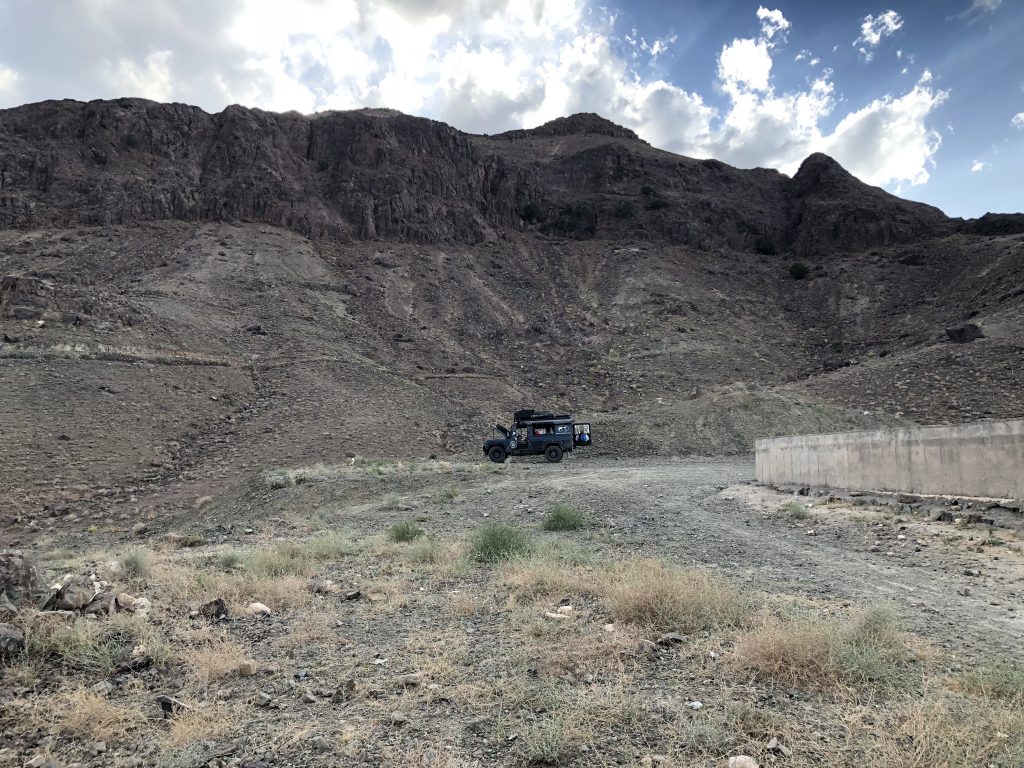 To understand why I headed up a rocky track, and the good and bad points of the rest of this story, it is necessary to explain to a western reader that Iranians love camping, but it is nothing like the camping we know in the west. In the parks in the evening they gather together in their cars and decamp onto the pavement or the flat sitting areas, decamp means they bring carpet, tea making equipment, cooking stuff, cushions, prams, smoking apparatus, toys etc sometimes piled up on top of little cars and they have a regular traffic jam in the park, cars can come into the park until it is totally full. Eventually all the pavements is full of families on carpets or pop up tents eating and drinking and kids running around, adults walk back and forward, and its like a busy city street in the avenues of the park, in fact I think there are more people, and cars, in the park than in the city on a warm summers night. Couple this with there being no western style camp sites that I have found so far in Iran and these are places we have to use when we go from town to town, if you can find a quiet corner they are free and fine places to stay sometimes even with showers! 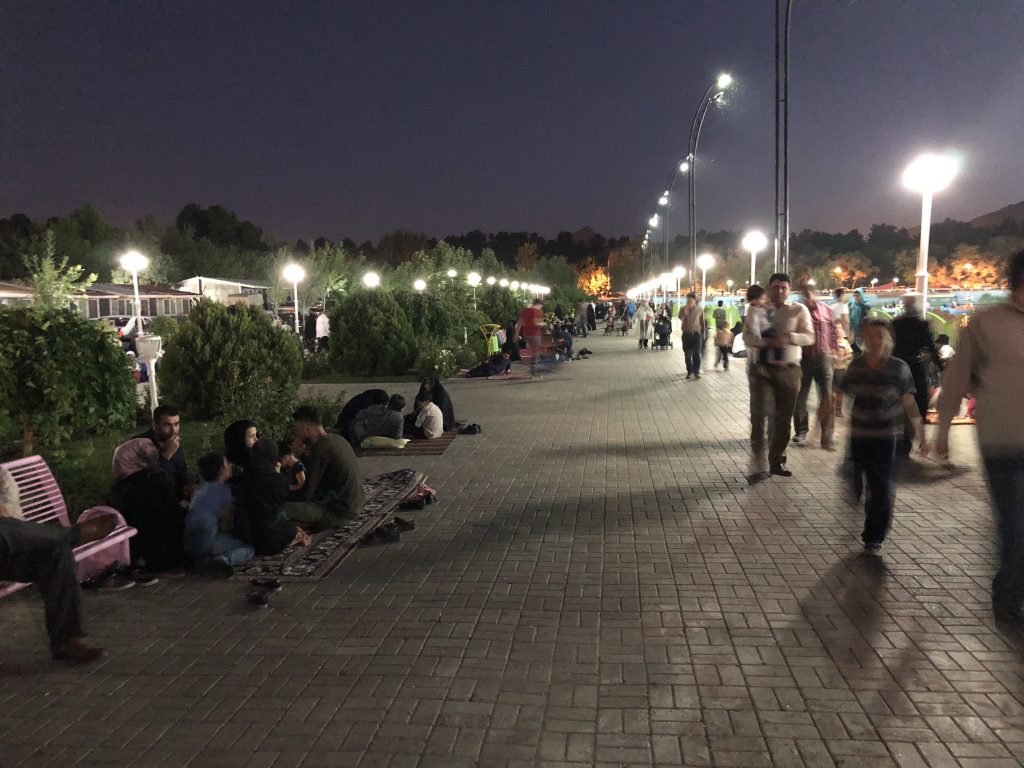 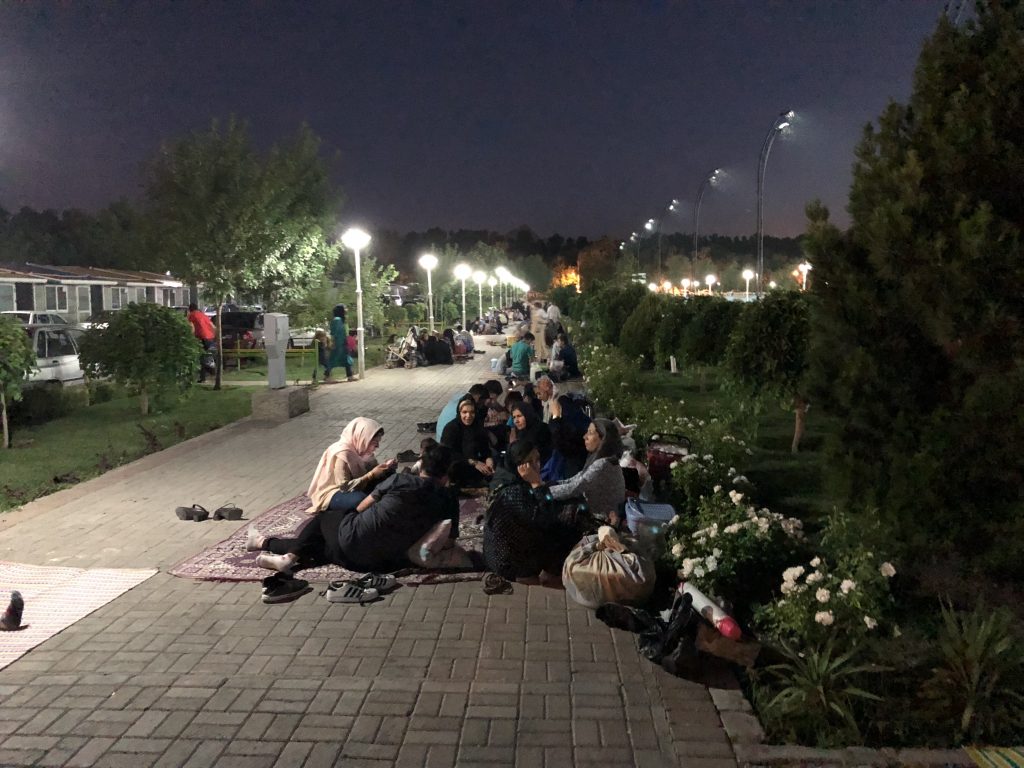 So the next day after my desert adventure I decided to give myself a day off, I had a fridge full of melted stuff, my water system was playing up and the seals on the vents which let air into the landy were hanging off, the adhesive melted by the heat of the desert. My plan was to go to Mashhad the next big historical town (in fact the most holy in Iran) and my jumping off point for Turkmenistan but to give myself a day off sightseeing. I was going to find myself a nice flat spot and work through the mechanical checks we do from time to time on the truck, and fix the problems caused by the desert, so I headed to a big park in the city which is supposed to be clean and well organised, and so it proves to be.

The experience starts very promisingly, I check in at the entrance smoothly and a nice policeman on a motorbike offers to led me to my place, or so I thought, actually he took me to the office of the chief of police of the park where I was very comprehensively interviewed, all very friendly, but thorough…Mashad is next to both Turkmenistan and Afganistan so I took this as just a bit of local security and so it proved. However the next bit I failed in my assertiveness test as the policeman had decided to put me next to the police station for safety, which is in the central part of the park, and I did not object strongly enough. Where I really needed to be was in a quiet corner of the park, not in the centre of the park. Thanks to my lack of assertion with the policeman in the beginning I have now become the main attraction for the local community who come to watch major parts of cleaning my fridge, gluing my seals back on, cooking my tea, and  there are even about five people a few feet away watching me during typing this blog. 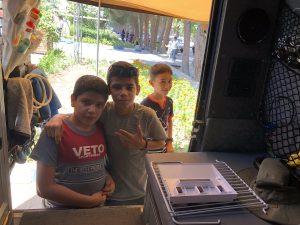 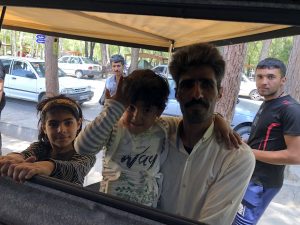 At times there are 10 or 15 people around my table in a semicircle and sometimes one or two policemen trying to manage the crowd.  This is partly so that the sidewalk is not blocked and I think partly with a little sympathy towards my predicament. At first this attention was a bit of fun, I enjoy showing off Nelson and on the positive side I have had three ice creams, two bowls of cherries and three offers of food from the camp barbques which are going on all around me. I even had offers of places to stay and help in seeing the sights. It was for a time fun to talk to some of the young folks, two of whom told me I was the first person they had ever spoken to who was an English speaker by birth, so we chatted as I washed out the fridge, cleaned and glued vents or stripped them off the car, the policeman took on a self appointed role to ensure that no one touched my tools, blowing his whistle if folks got too close, it was all a bit comical really in a nice way. So now I have a kind of adopted policeman hovering over me full time as the crowds had got a bit out of control.  Now by rearranging my camp set up so my back is to the street, opening my dor and strategically positioning my chair I have created a kind of no-go area of peace.  By working on my blog with my back to folks I am managing to keep interest down – my last resort is my translator which I have set to “I am working please give me peace to work, thank you” that seems to do the trick most of the time. Just used it again a few seconds ago. 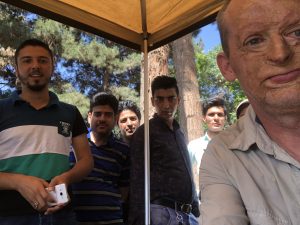 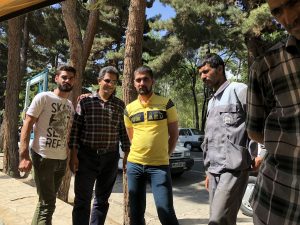 At no time is the curiosity of the people in anyway unfriendly or hostile, nor am I specially worried about my kit, the valuable stuff is locked securely away in the truck (a valuable feature of the truck is its safe and its central lockable cubby box when I stop all the navigational, camera and computer stuff goes in there and it stays locked, in addition I have the habit of keeping the car locked even when I am showing it off I open one door at a timed so that people are not reaching in one door when I am at another, not that I had any actual problems of that nature, in fact the people were more trying to look after my stuff with the policeman gathering my tools into a neat pile. 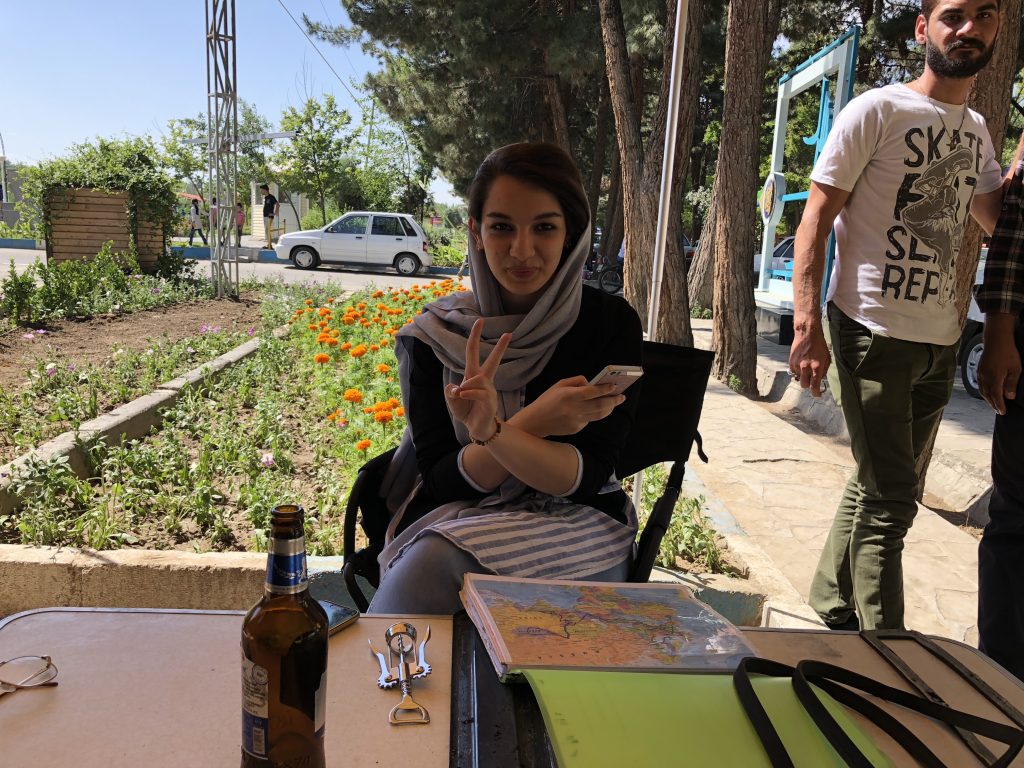 So again I have had a very memorable day, to be the centre of attention in an Iranian park, in that countries holiest city, is for sure not something that happens every day, for that interest to be wholly friendly and curious is a great reflection on the spirit and kindness of these people. I wander through the crowds of people sitting and lying on their carpets in the park, in the smoke of the barbques as they drink tea, make kebabs or smoke their water pots and think how lucky I am to see such a thing and to feel so safe, even if I am at times bit overwhelmed by the interest at times