Drink till you pee – Tabas

It is academically interesting that my Iran lonely planet says the desert here is the hottest place on earth, while the same guidebook for Turkmenistan says it is their desert, and I am sure I remember the same claim being made for death Valley in Nevada when I travelled through it with the family a few years ago. Probably it depends on who claims the hottest moment, day or year average but I think it is safe to say that these desert salt pans are really, really hot

The US trip was eventful because, indulging in my interest in old cars, I had hired a VW camper van in San Francisco and headed off down route one towards Las Vegas with Lee and the girls. We got as far as Vegas and stayed in the famous Caesars place, but to be honest it was the Grand Canyon and the desert that I was most interested in, I can take or leave the plastic marvel that is Las Vegas. However that box ticked and we were safely on the road to Flagstaff, the first in a series of campsites I had booked to circumnavigate the Grand Canyon, and pick up some sites like Yosemite and Monument Valley, in the remaining two weeks of our road trip. Sadly that was to be the end of our camping, suddenly one of the valves in the VW engine decided to exit the side of the cylinder and the motor was destroyed in an alarming series of crashes and clunks. This left us stranded at the side of a US road in the middle of the desert and led to a series of hair raising misfortunes that are worth a separate blog…

This story was in the back of my mind as I set of from Yazd, in my mind I was well prepared for the desert, well prepared apart from one thing, my Land Rover does not have air conditioning. In the US both the VW camper and the car we ended up hiring did have it and I was beginning to think I perhaps had listed too much to the land rover “old hands” who said – just drive with the windows and vents open and you will be fine – usually followed by some story about how they had crossed the Sahara on a Donkey chased by the Taliband or some such. This had proved to be true so far but the next section was the deep desert. Never the less I set off, fridge full of water bottles cooled overnight, fans on, vents and windows open in the already warm morning air. Once out of town I had to do the usual dance to get “Gasoil” which involves persuading a friendly truck driver to use his quota card to allow me to buy 50L of fuel to top up the trucks tanks. This took about 15 min of decent banter with the staff as we waited for the needed friendly truck driver to appear – eventually one did and with friendly waves I set off into the desert.

The views in the desert are occasionally spectacular, flat salt pans interspersed with jagged peaks and ranges of sand dunes, but a big part of the beauty of the desert is the solid, menacing, endless wall of heat which is only kept at bay by the flow of air from my fans, fully open vents and windows. There is a big difference between this way of keeping cool and the aircon version, my body is supplying the moisture to keep me cool in the desert, the air is just wipping it away. So although one is cooled by the constant flow of air the way this happens is that my body was pumping out moisture without it even having the chance to turn into sweat, this became obvious as I went through my first two liters of fluid in about an hour and a half, normally a man of my age, and perhaps me particularly, would have had to stop for a pee given I had drunk two large cups of coffee first thing that morning, but there was no sign of that happening! Somewhere in the back of my mind I remembered that the best way to know if you were properly hydrated was to drink until your pee was a normal color, so I guessed not needing to pee at all in the morning was a bad thing. I increased my level of fluid intake to compensate and finally about one in the afternoon I was able to pee but that required me to drink four liters of fluid and then a further two before I got to 5pm (then another one and a half at my night camp before I felt normal again) 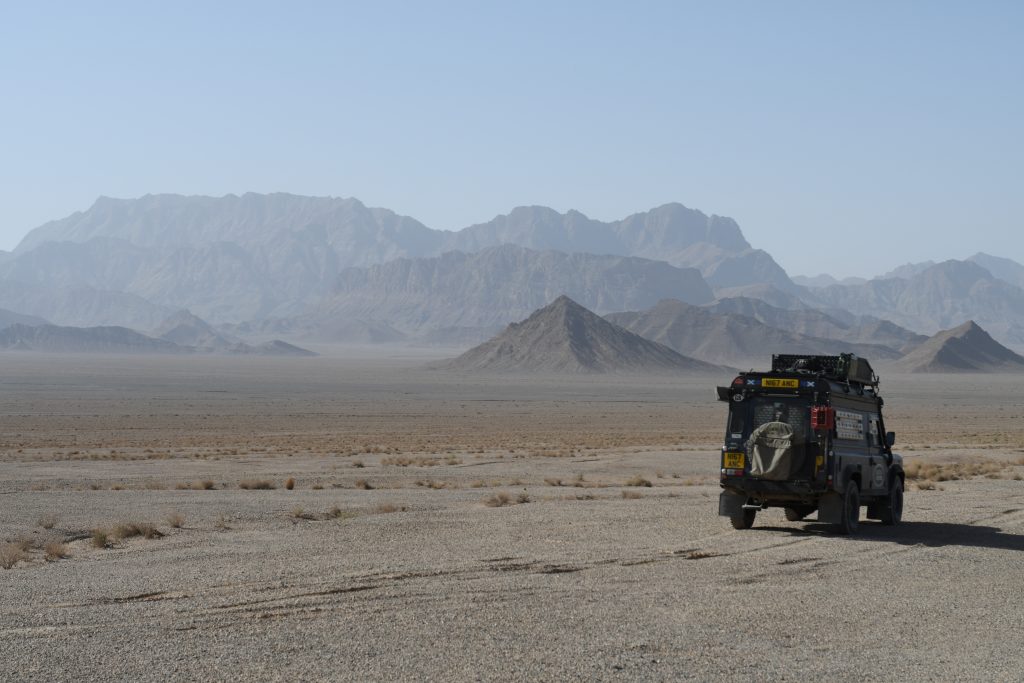 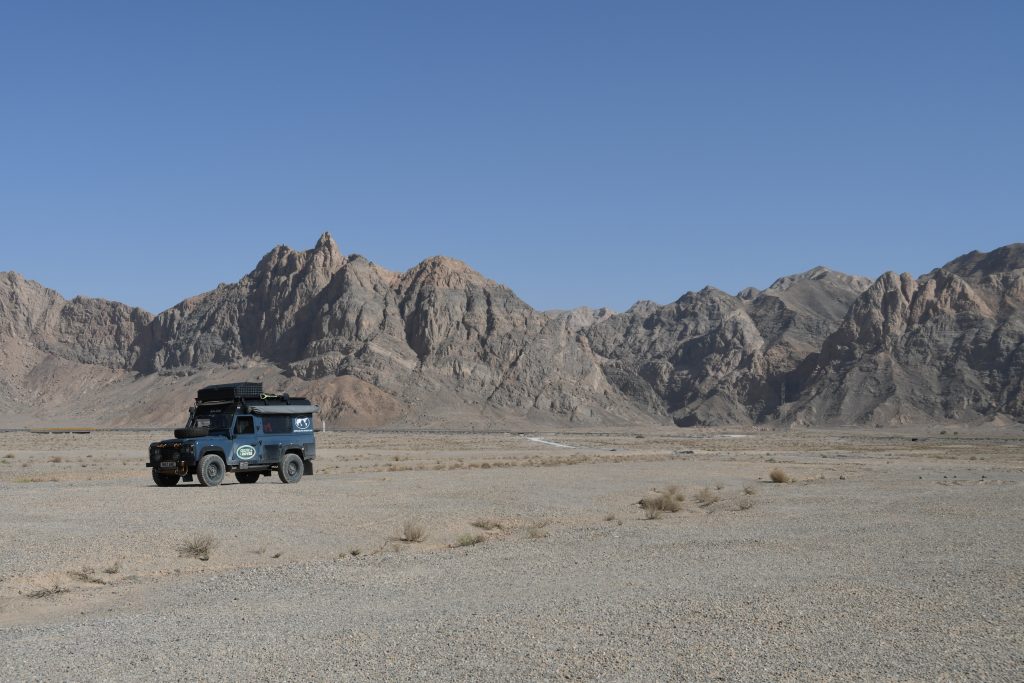 Now stories of pee may not give you an idea of how hot that desert was, but the temperature in the car showed 43oC, the fridge packed in with most of the contents melting, the glue on the seals on the air vents melted and the water in the under floor tank was so hot I had to pull my hand away when I turned on the tap, the shower in my truck is suppose to be only cold but that day it would have been too hot to use. When I stopped to take photos it was like opening an oven to take the chicken out on Sunday, but standing too close, it was only bearable for a few minutes. 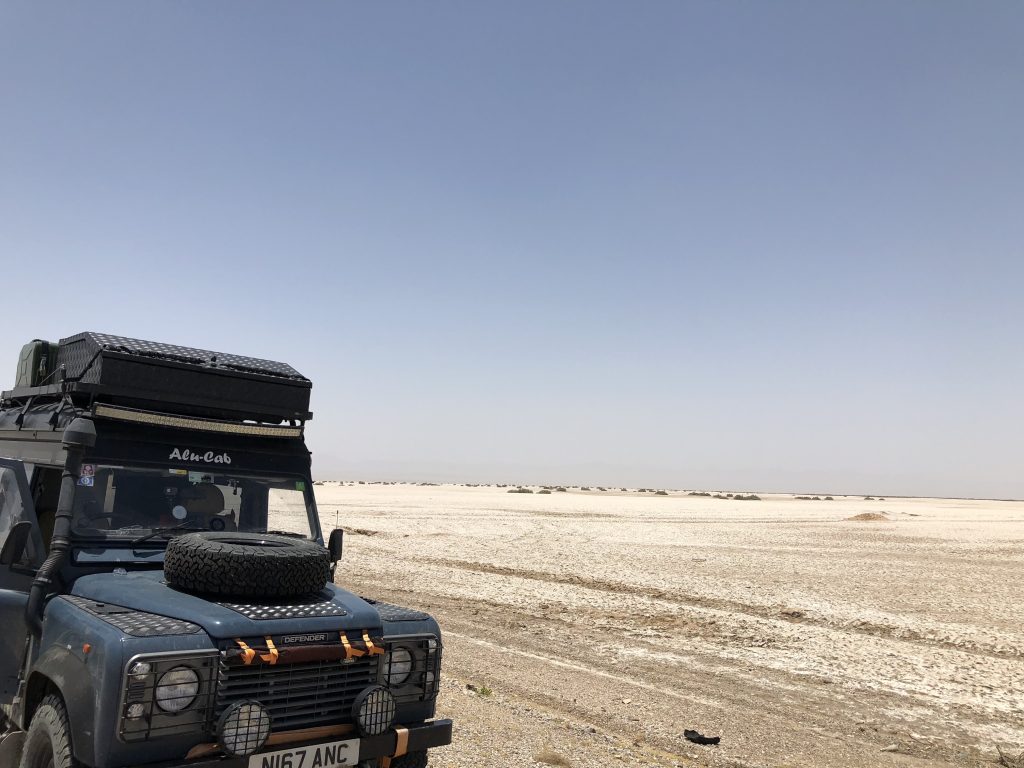 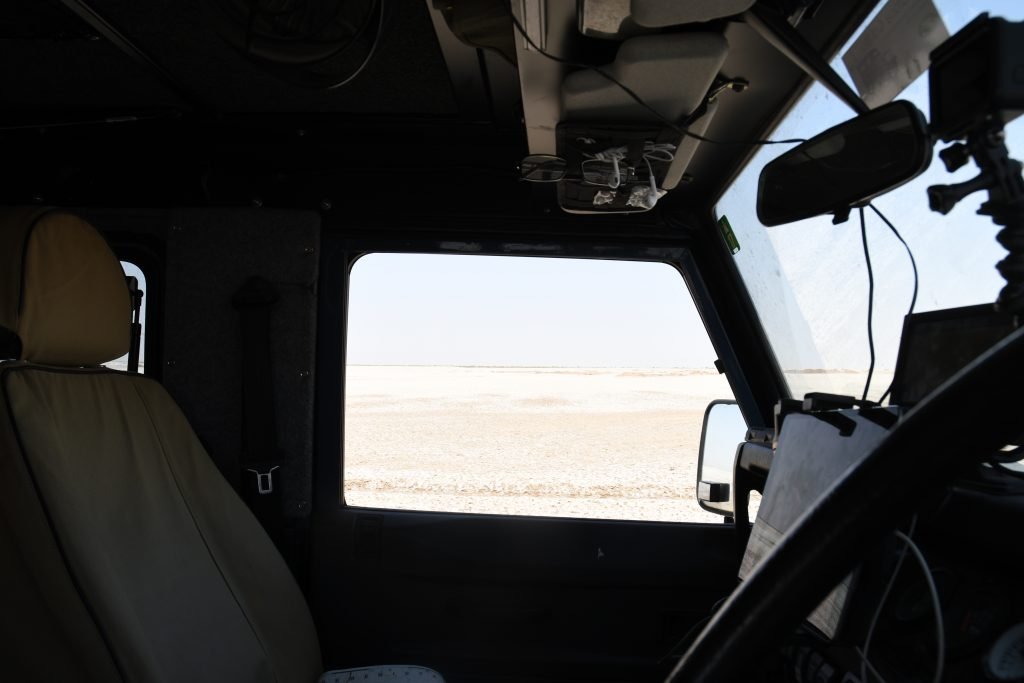 As the miles rolled on I began to worry that I would be in pretty bad shape if anything happened to the car (remember my previous experience with old cars in the desert). I had plenty of hot water, some slightly chilled water sort of cooling in the weakly functioning fridge, and there were regular police checkpoints every 50miles so if I had broken down I am sure a recovery could have been arranged. Just to be safe I kept my excursions off the main road to where I could still see the highway and could walk if needed with my hat and some water to flag down a friendly local – at least in Iran the people are so friendly that I was not concerned about people not stopping, which by the way is what had happened to us in the USA until a friendly policeman took pity on us. 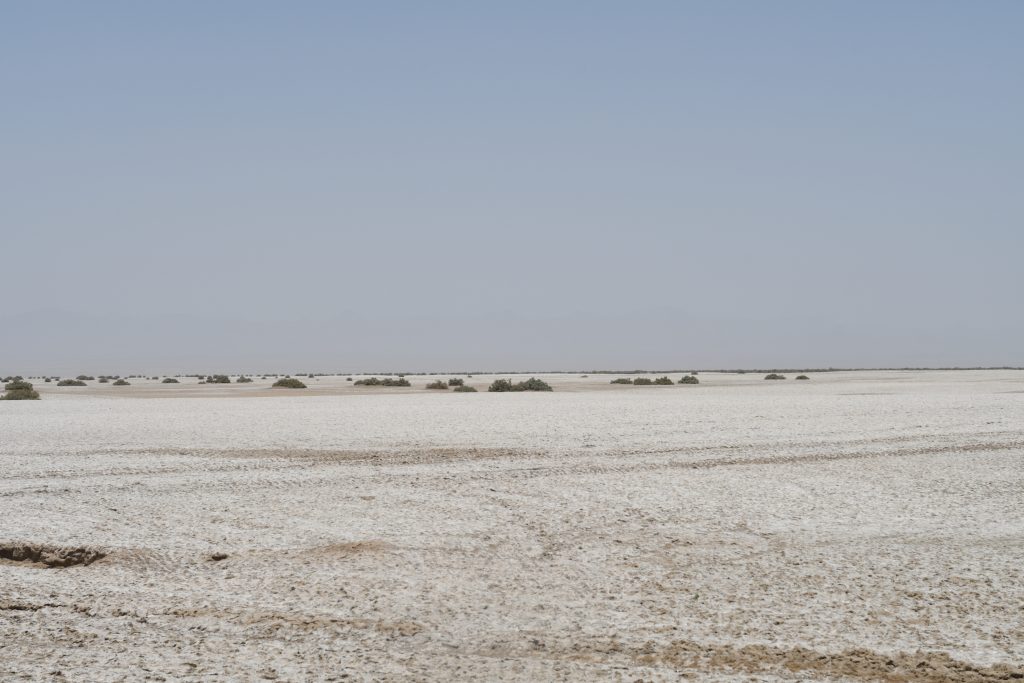 Of course in reality there was nothing to worry about and I can write about this now from the peace of my mountain campsite, where the air is much cooler, and there is a comfortable breeze. I had intended to stop in the Oasis town of Tabas but as soon as I stopped the car I realized that their was no way I could survive in that heat in the truck. Instead of staying I just walked into a little shop bought a lot of cold drinks and snacks (Iranian cheezy balls are quite a nice source of salt) and drove round a pretty Mosque before heading out of town across the arrow straight road to the next part of the desert, at least the breeze in the truck made the heat bearable. 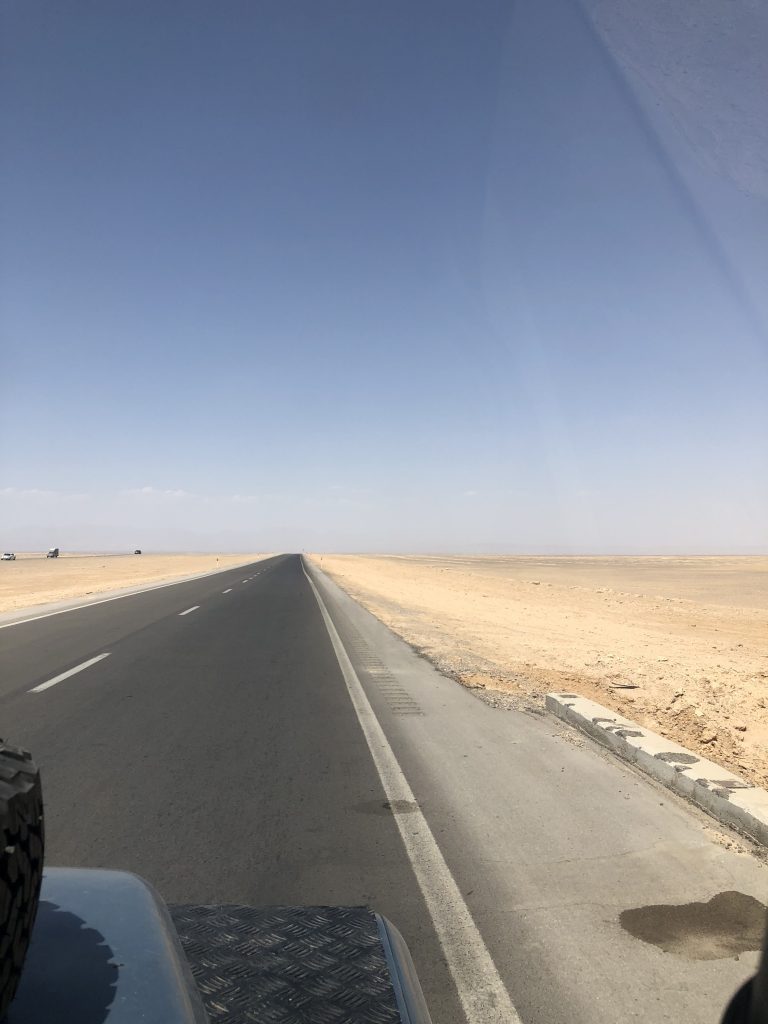 That day I drove 600km over 10 hours so by the end of it I was shattered, and I had listened to all my music twice, and some radio programs about history called In Our Time which is a great way to pass the time. Next stop I will refresh the music and the podcasts.

Just like all of my time in Iran these two days crossing the desert with out the benefit of air condition, the shorter part to Yazd and the long trek to the mountains south of Mashad, had created a really significant experience for me. Firstly it had renewed in me a serious respect for the heat of the desert, secondly I was really pleased with the (so far) solid reliability of Nelson my Land Rover, some adjustment is needed to the vent seals (or I will get wet feet first time it rains, and I need to improve the ventilation of the fridge back, (a few well placed holes with my drill should do the trick) and I will be ready for the next desert in Turkmenistan, which, some say, is hotter still….

So next time the old salts say, “don’t worry about aircon we never used it in the Sahara in the 70’s” smile and nod your head in agreement…then just install the aircon if your are going to cross the Asian or American deserts in the middle of summer, it will be less of an ordeal and more enjoyable (maybe not as good a story the reader can be the judge of that)

The reason I am sweating my way across the desert is that the passes in Nepal and Pakistan are open in the summer and bearable in temperature, in the winter they are closed often with snow, or really cold, so to get the good conditions in the mountain passes a few days of sweating it out in the desert is needed. Despite the tough few days it is true that travelling in the car is for sure better done in warmth and dry conditions than in cold wet misery even if it’s a bit too hot occasionally.