Tony and I have been exploring the beaches of Brazil in the last week of the trip before we head to Montevideo and put Nelson in his container home, mostly this has involved splashing around in the sea, wild camping beside beaches in sleepy but friendly towns like the spot below in a little town called Arambare, we just drove along the beachfront and pulled into a parking spot on the beach, some loos 15m away and lots of locals out for a walk to chat as they passed b 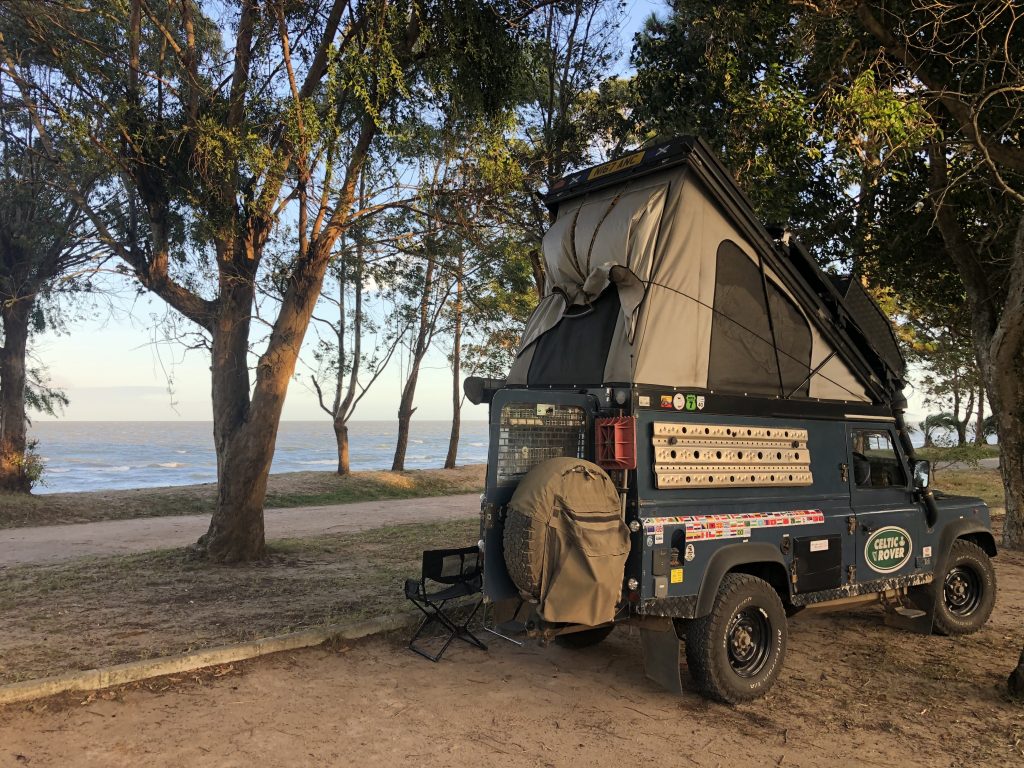 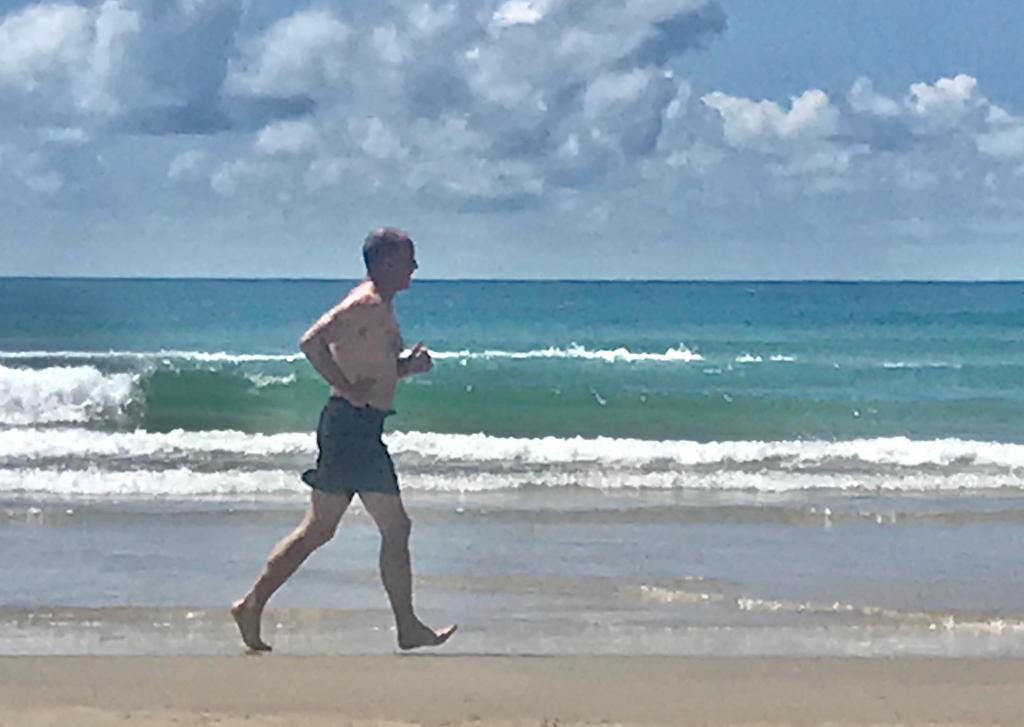 This is probably also motivated by my self conscious tummy wobble in contrast to the rippled and tanned look which seems very popular on the beach, but most of them have 30 years advantage on me, my Dainel Craig impersanation does not work out so well as you can see ! 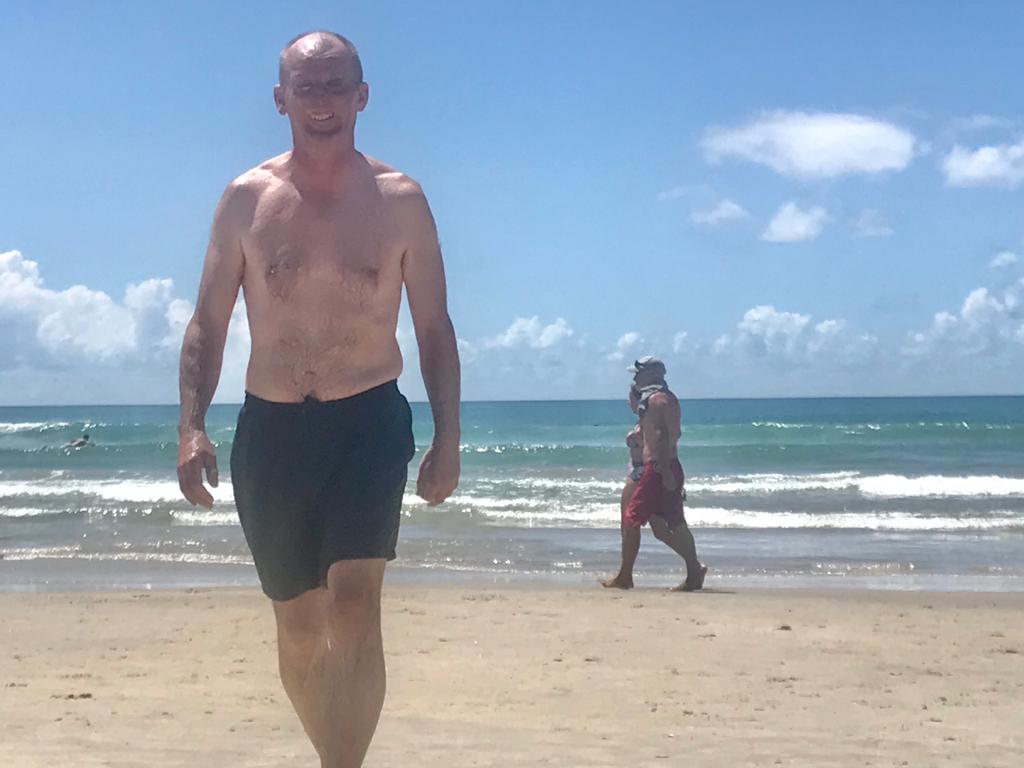 Tony ever full of energy, is very refreshed by his swim but is not turning heads 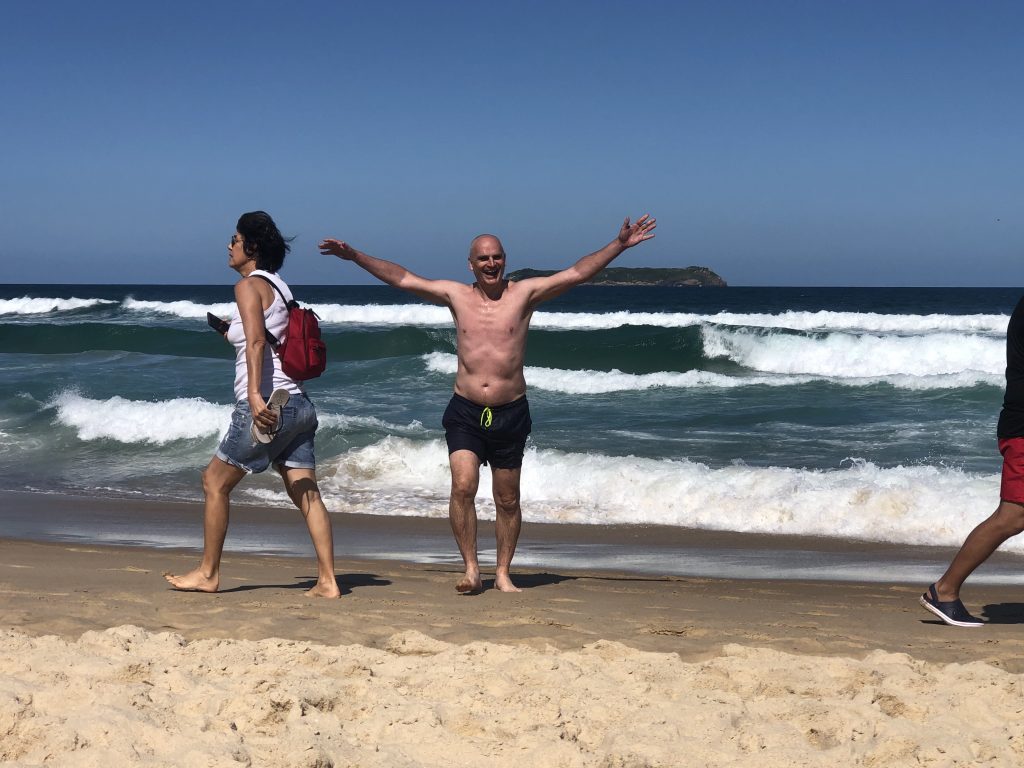 It is very nice to get up in the morning for a run along a deserted beach, this one from two days ago, somehow made sweeter by text from my running friends complaining about snow and gales in Edinburgh. 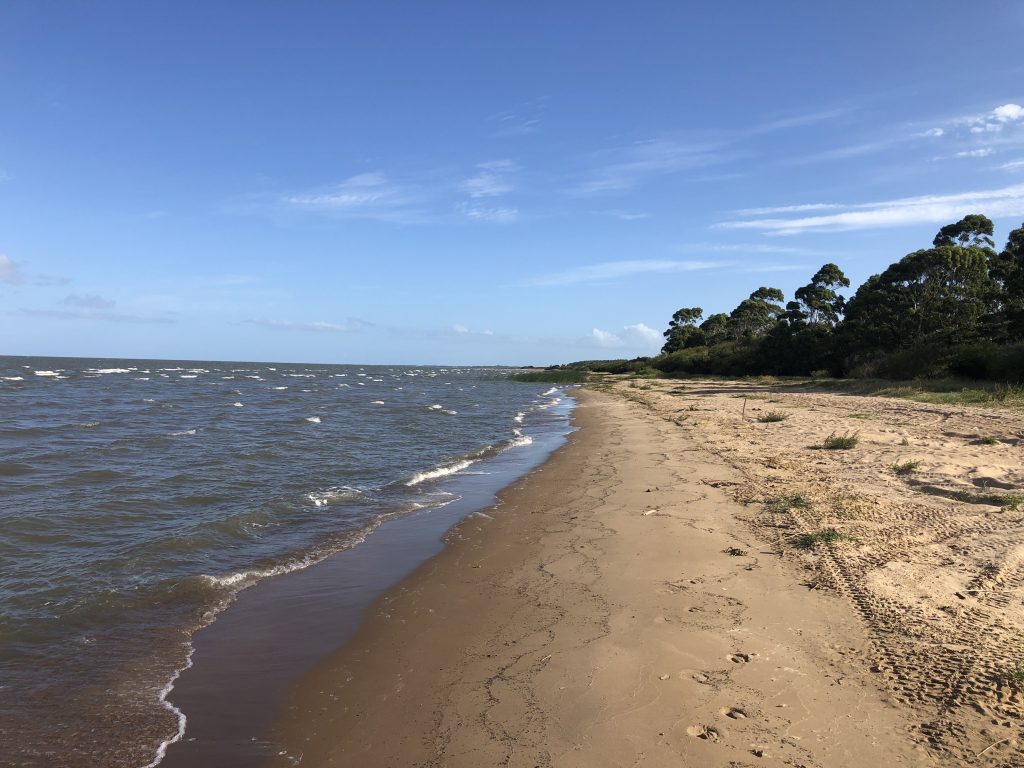 We keep seeing folks here ‘”going to the beach” it is a major logistical operation with beach chairs, umbrellas, cooler boxes and thermos flasks to keep their mate cups topped up, some even bring their dogs though that is more generally not allowed like the couple below 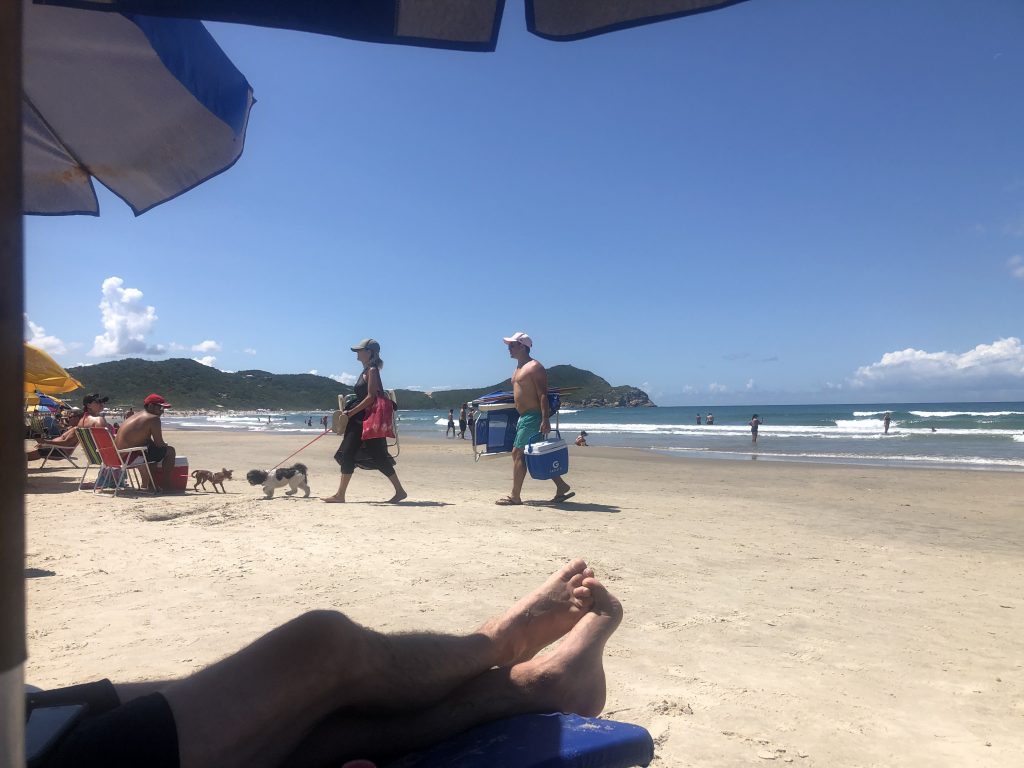 It took us a little while to get used to beach life, normally we are more into mountains and narrow passes but eventually we decided that we had to do it properly so went along to Praia Rosa just south of Florianapolis (which also has nice beaches) and we parked Nelson in the beach road and rented a pair of sun loungers and a beach umbrella, a critical thing for my fair skin, the nearby cafe kept us stocked with ice cream, coffee and cold drinks and we embraced the “pura vida’ for a day. 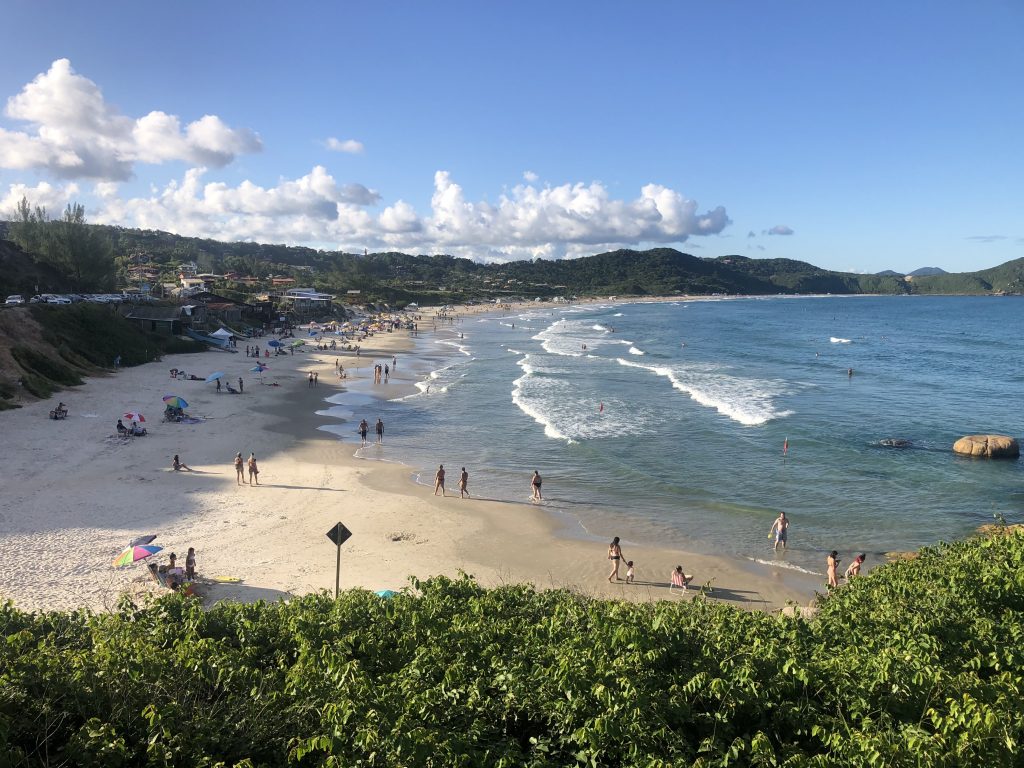 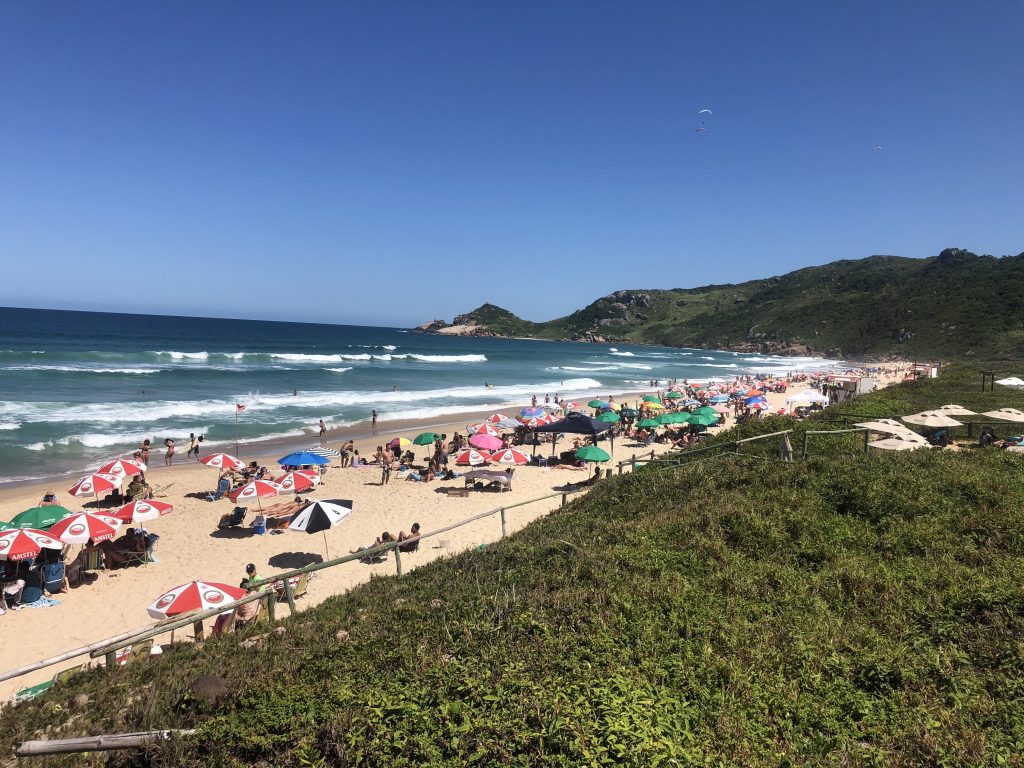 Today was another thing all together, we found on the map a beach which claims to be the longest in the world, Playa Cassinio in Brazil, which we measured as about 200km long and of course had to do it. 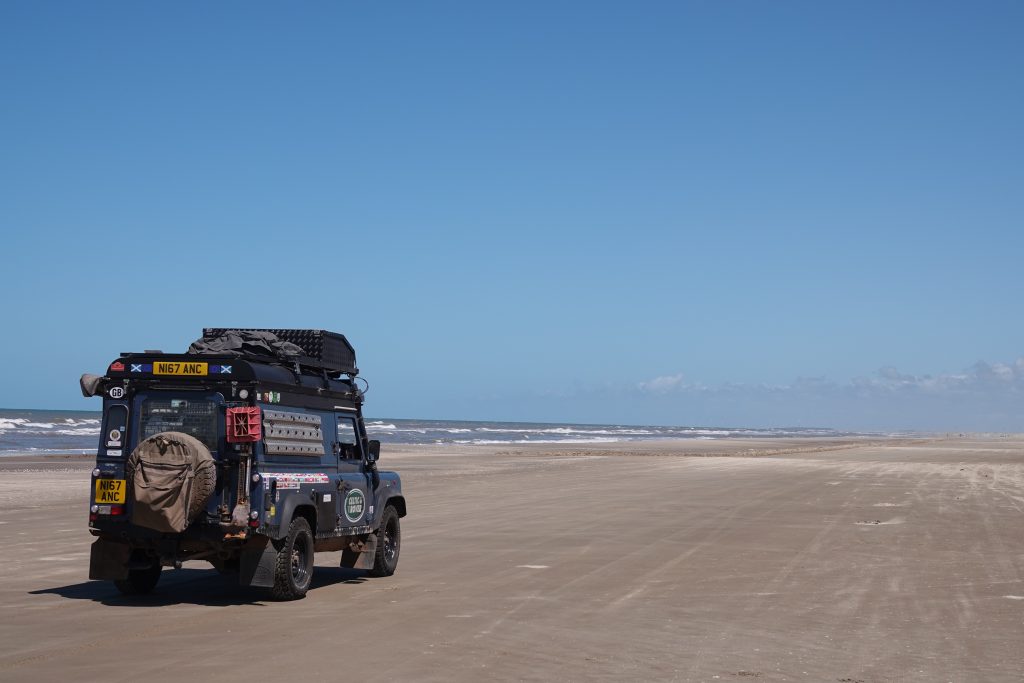 Things started well there were a lot of cars on the beach and the sand was lovely and hard packed. After about three hours of driving down the beach we were all alone and started to hit small soft spots, so I engaged central diff lock and slowed down, as the soft spots merged into deep sand the tyres were let down and the rear diff locked

After that we used a combination of cursing, prayers, power and momentum to get through as we dared not stop on one 30min section or we would not have restarted without the sand ladders and digging the truck out.

So my three ton Landy can do a decent impression of a beach buggy after all and my longest beach drive ever was logged at 6 hours and 200km ! 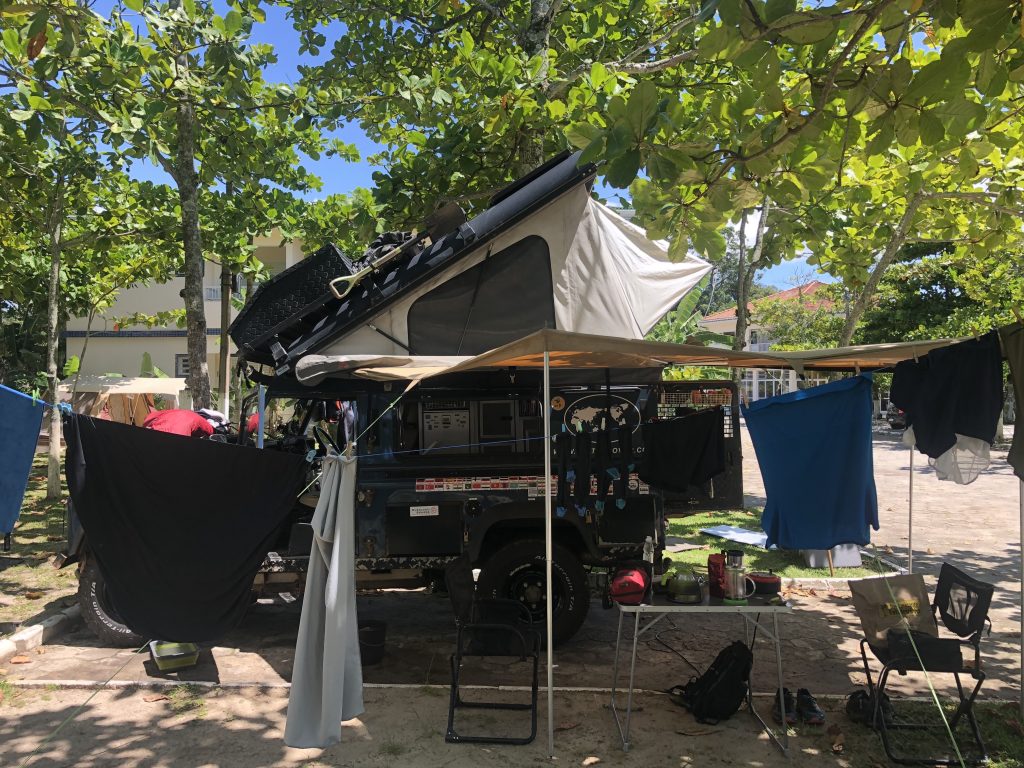 In between all this strenuous activity on the beach I am starting to get organised around the end of the trip, clothes are being washed, the Landy has been cleaned from top to bottom (it really needed it), everything aired and dryed and we are running down stocks of food in preparation for shipping the car back to the uk when it has to be all packed up in the container, its good we have some decent sunny and dry weather so we are not packing anything damp for the month long storage in the container.

Although after six months I am happy to be heading home, every time I see these flip flops in the house in Scotland I will be thinking of the balmy warm lazy month on the beaches of South America and when winter comes around something will be pulling me back to long sunny days warmth and surf ! 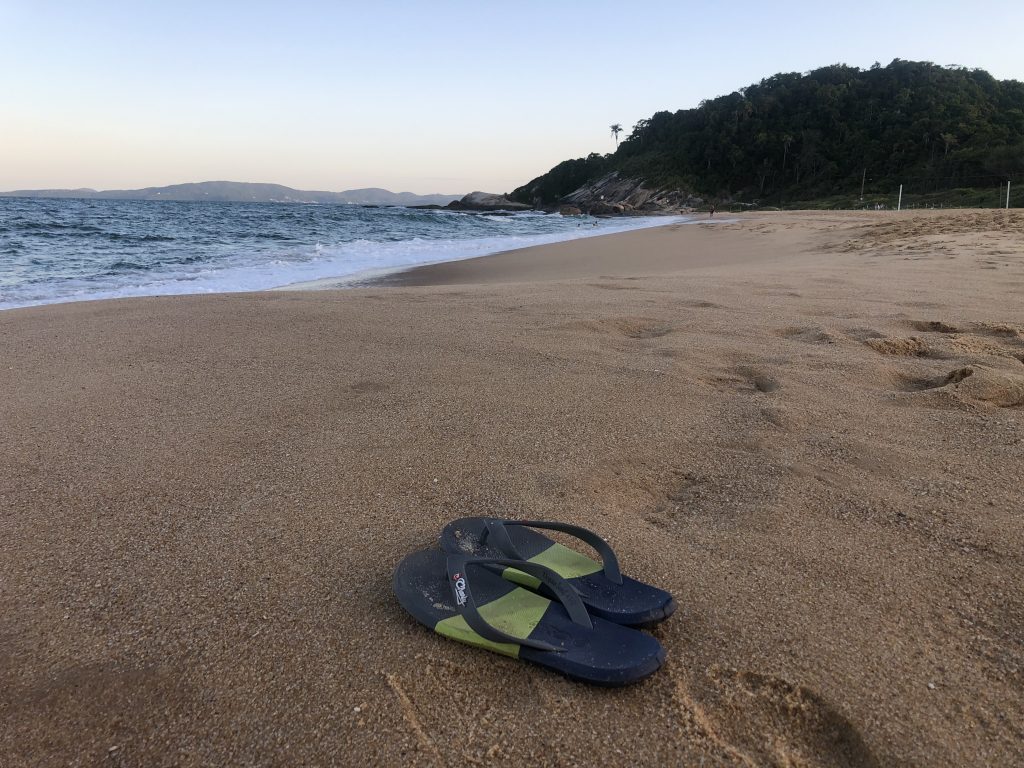 Previous Missions and Falls, a few days in the Jungle
Next A vist to Germany….in Brazil