Carnival…dancing shoes, not much else

One of the anticipated highlights of the trip was to see Carnival in South America, however this caused some angst before the trip and I was quite anxious about it ahead of time as often it is the events with a lot of advance anticipation that can disappoint simply because I have built up a picture in my head of what it should be rather than just enjoy the event for what it is… I see online many travellers falling into the is trap in reviews when they say a waterfall, glacier or a walk is not as fantastic as the one they saw in another country and they don’t just enjoy the day or the experience for what it is, I try not to fall into that trap as much as possible but I could see that there was a danger in the case of Carnival.

The first risk I took was choosing the location, there is of course a very spectacular and well known carnival in Rio, but friends had advised that recently the situation in Rio was not so favourable and it is a long way north, there is a great carnival in Gualeguaychu near Buenos Aries but it is rammed with people from that city so I chose Encarnacion the Carnival capital of Paraguay instead.  I had read that it was a super carnival with a new purpose built Sambadrome by the newly developed waterfront beach area and was very friendly and accessable while being still a major carnival and a night to remember.  One of the reasons I had opted for a smaller and friendly Carnival was from our experience in Mongolia where we happened on a small town Naadam festival and could wander among the competitors and enjoy all the different sports at very different levels of proficiency.  Lee and I were lucky enough to happen on a Guacho festival in Chile with exactly the same friendly and accessable feeling.

As we walked around town just before the Carnival was supposed to start looking for somewhere to eat my nervousness increased as there seemed to be no one around in the main town square and we were able to have a surprisingly nice Japanese meal in a posh restaurant without a reservation.  I did not think either of these two things were good signs and began to worry that we had driven past some towns with great Carnivals and ended up in a quiet backwater. 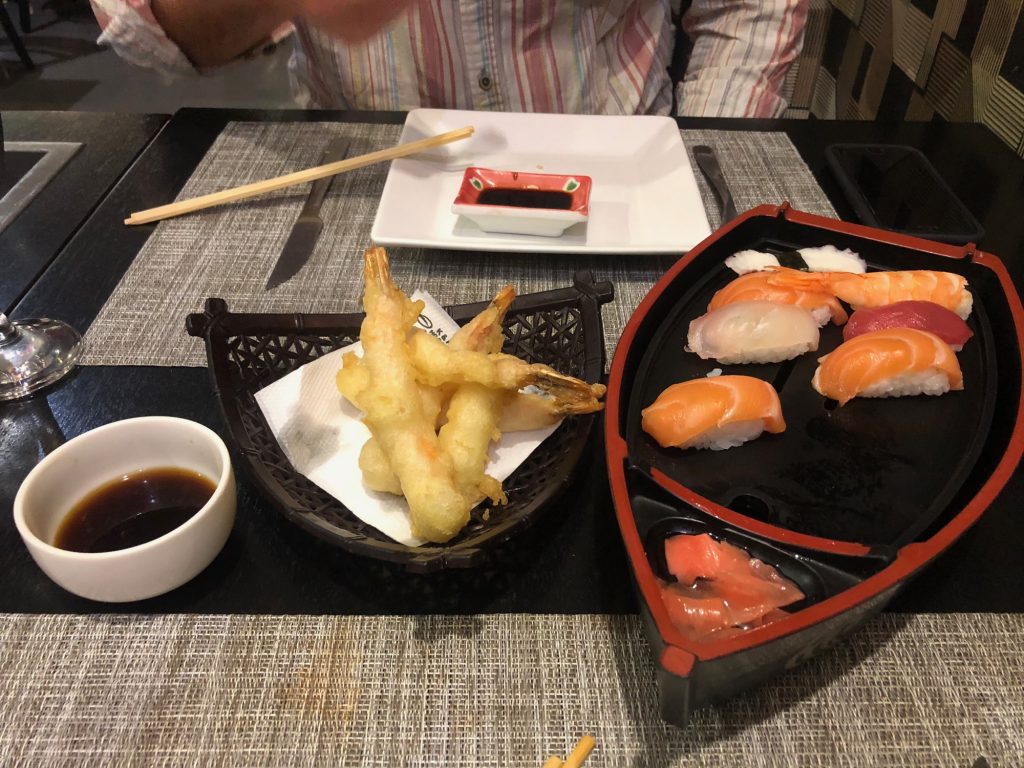 Even the excellent Japanese food could not quell my concern and so, in typical English fashion we rushed the food and headed to the Sambadrome just before the official kick off time 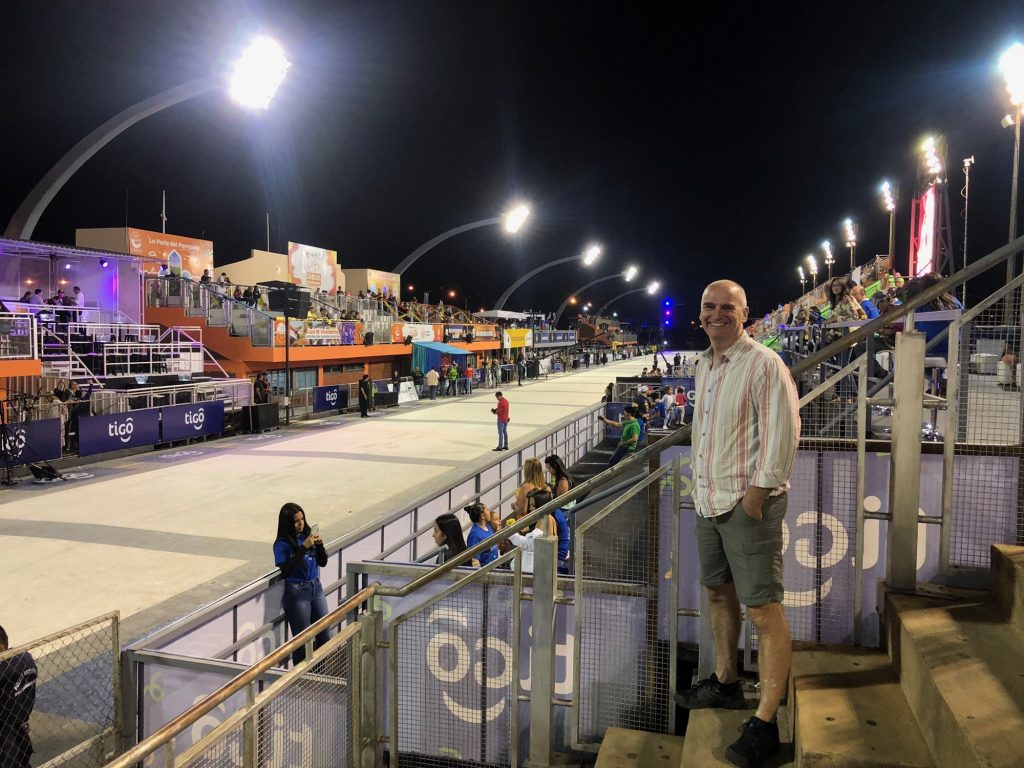 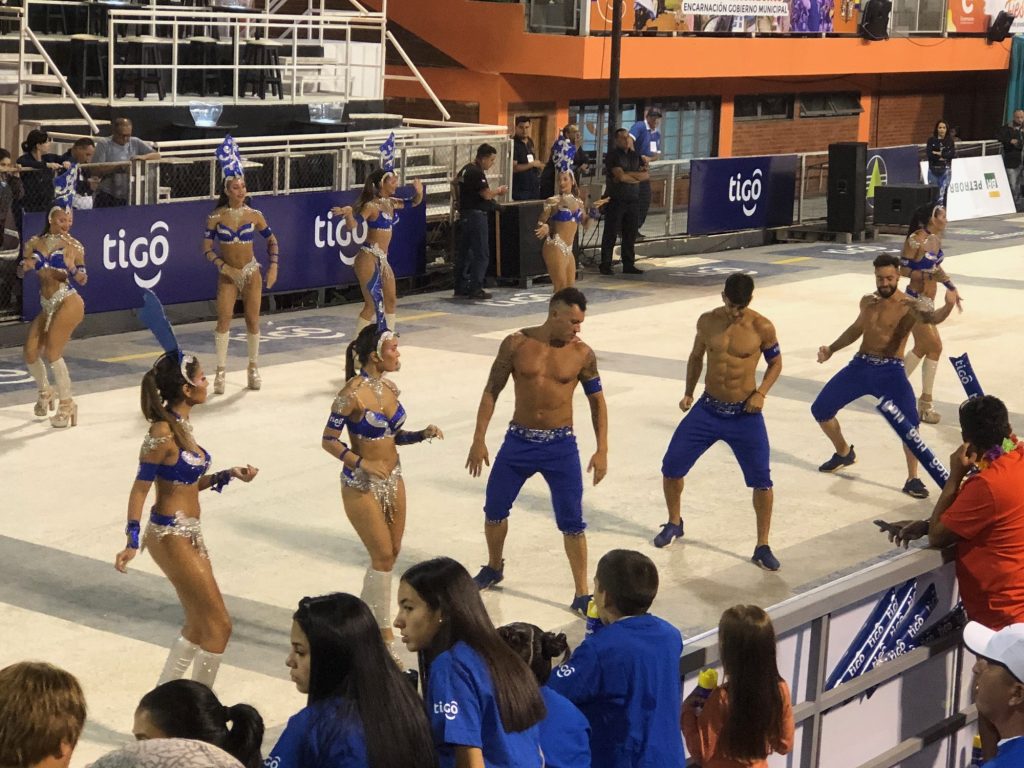 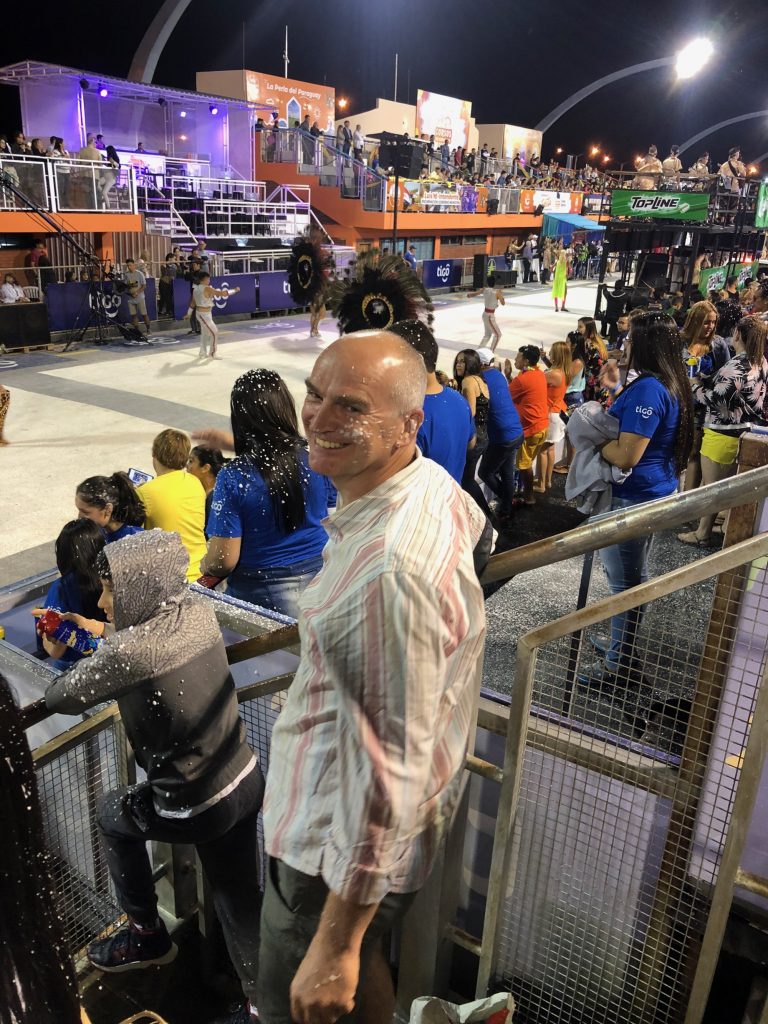 However as the stands filled up and the real dancing started Tony is starting to smile as he is squirted with spray foam at this point it is about 9.30pm and things are just beginning to warm up 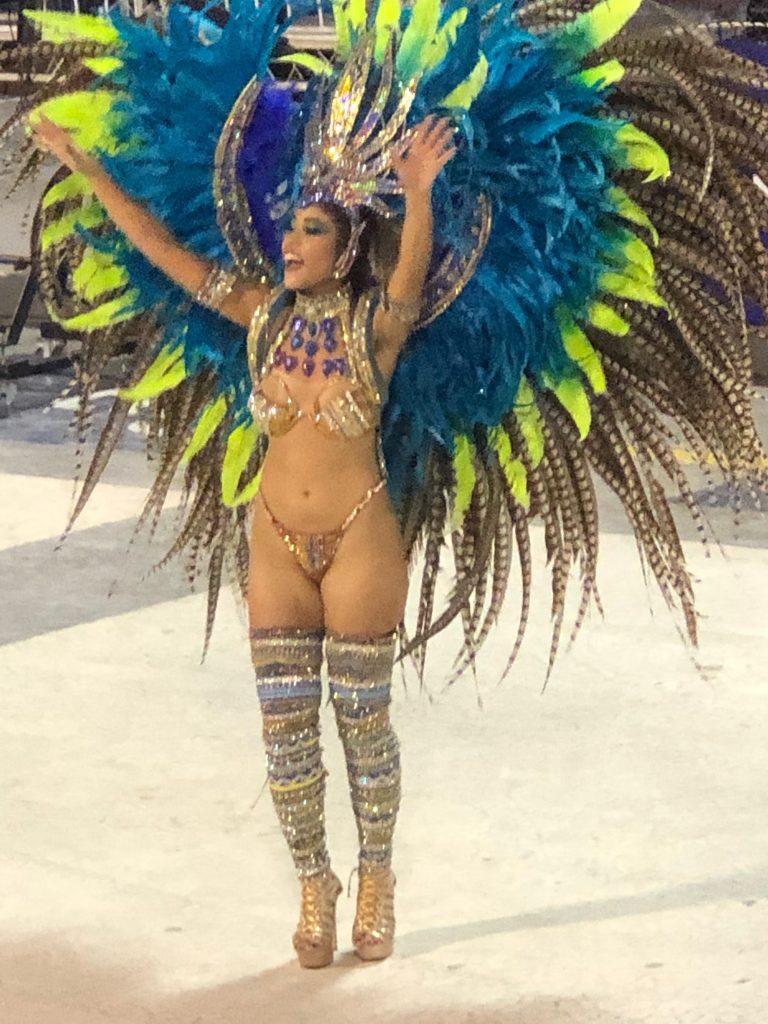 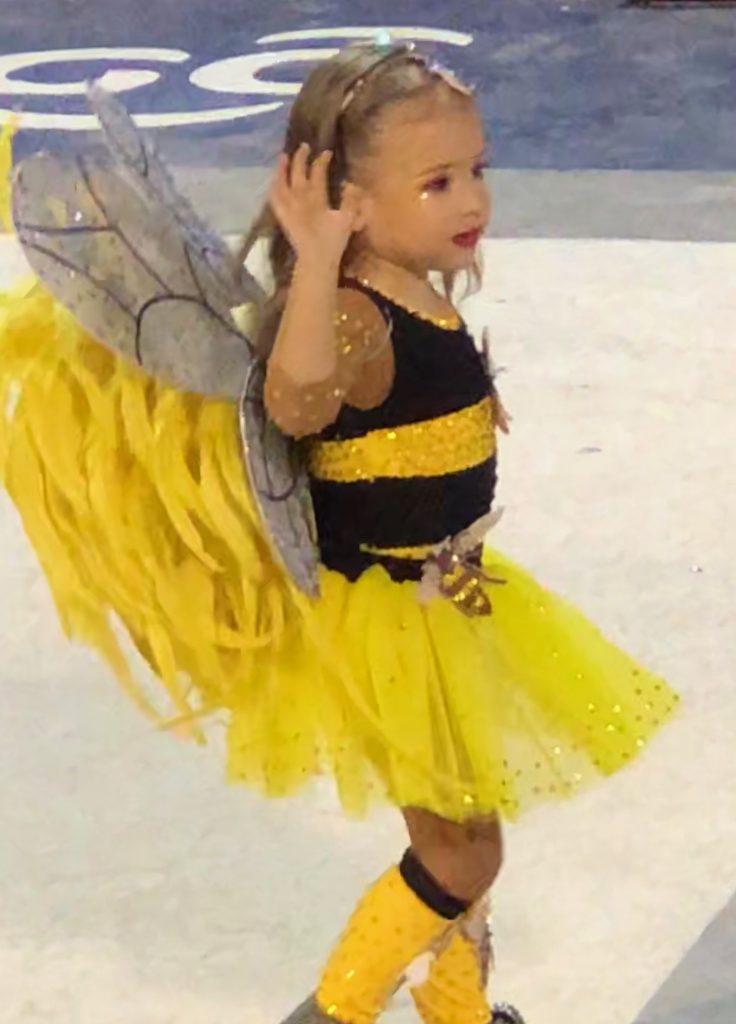 Mascots were used to get sympathy and draw the crowd in 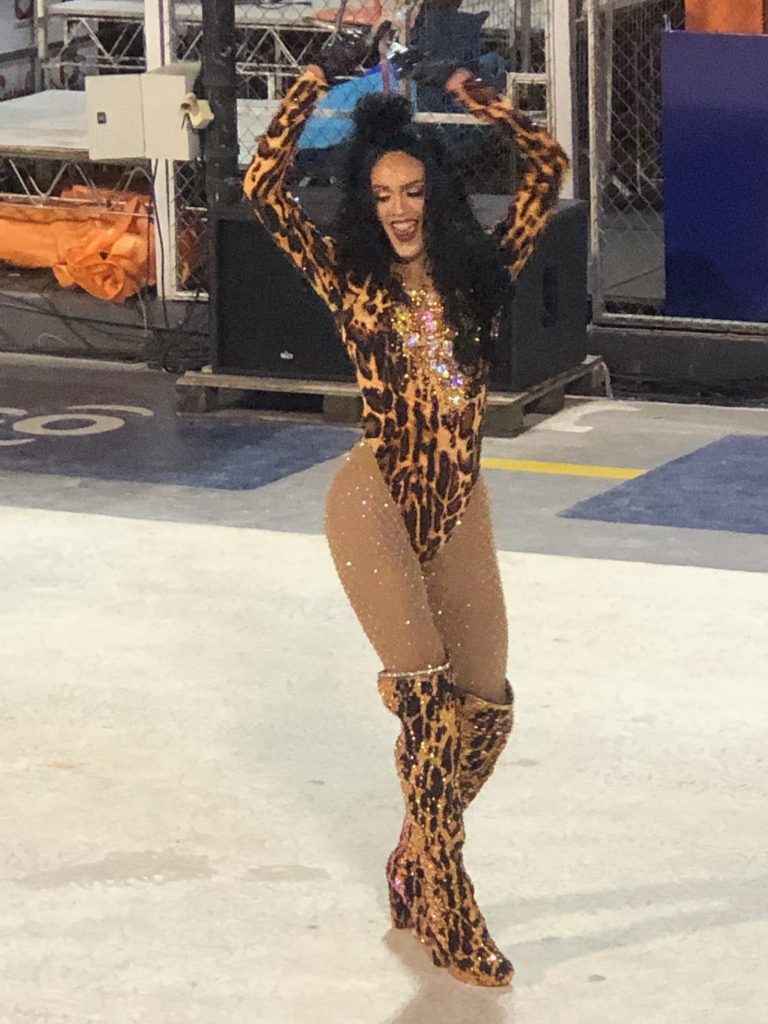 and the occasional big cat stalked past 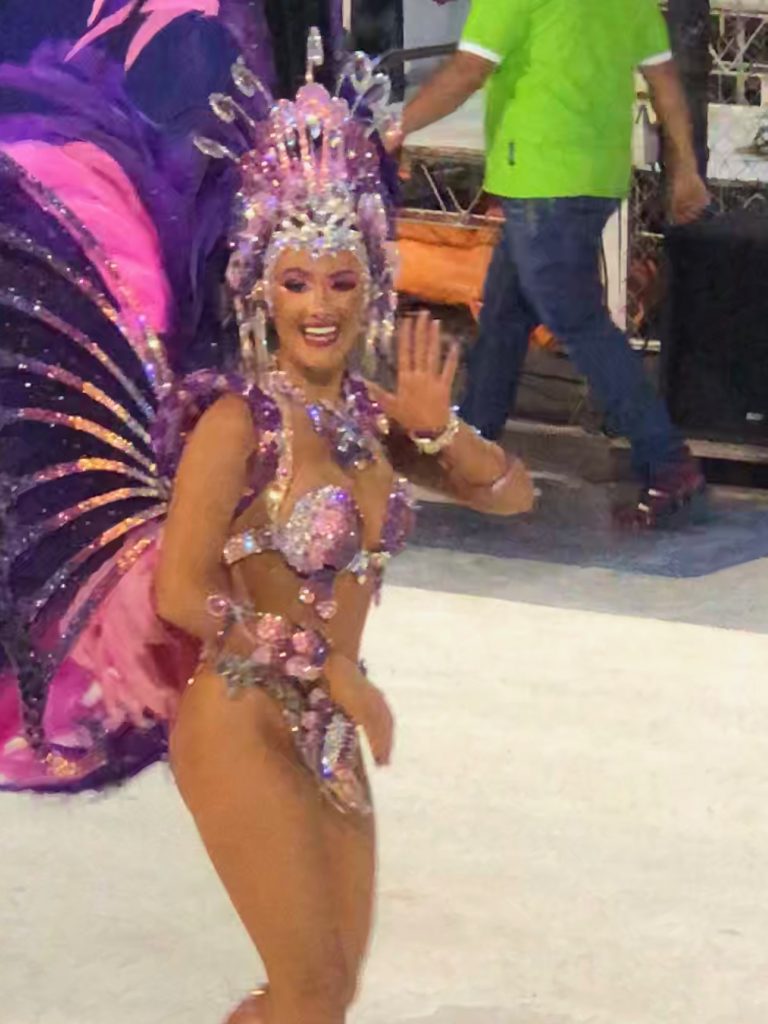 We even got the occasional friendly wave 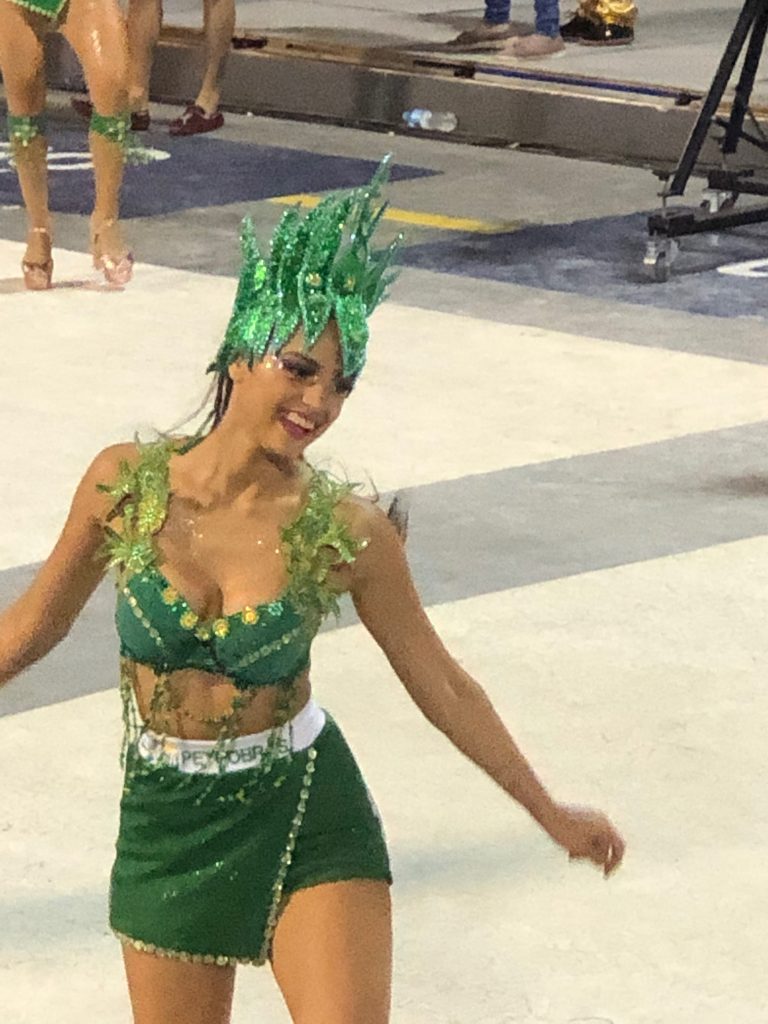 And even Irish style Pixies were included to make me feel at home, when the music ramped up everyone, including this little girl beside us started into a spray foam war which soaked all the dancing crowd 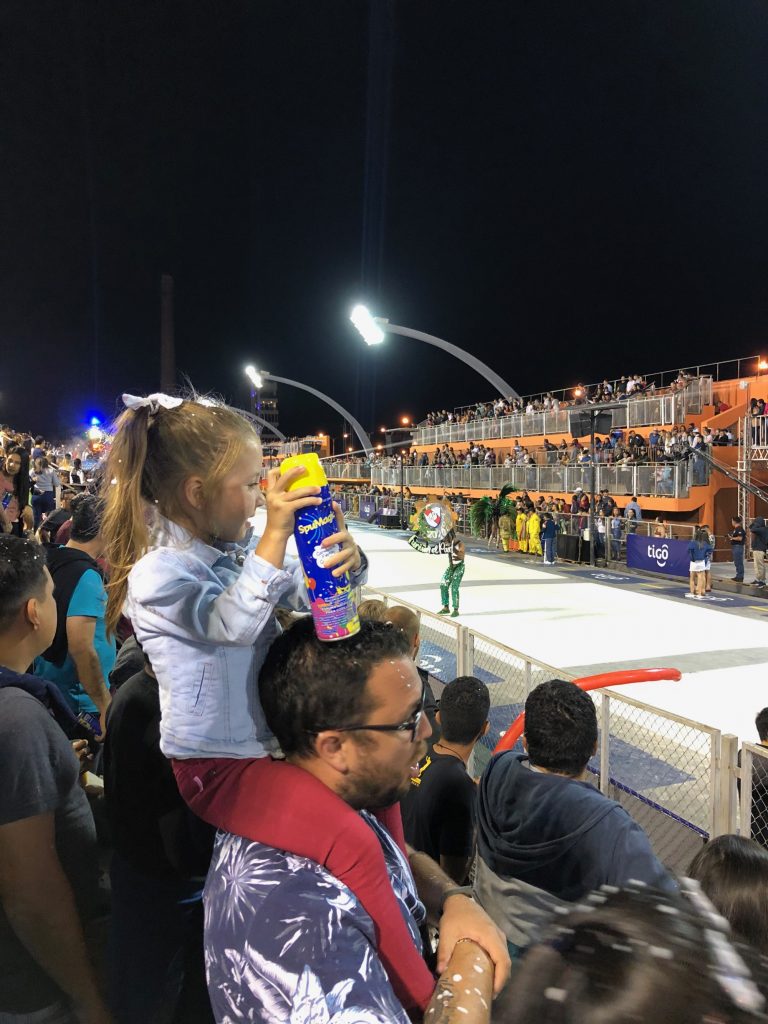 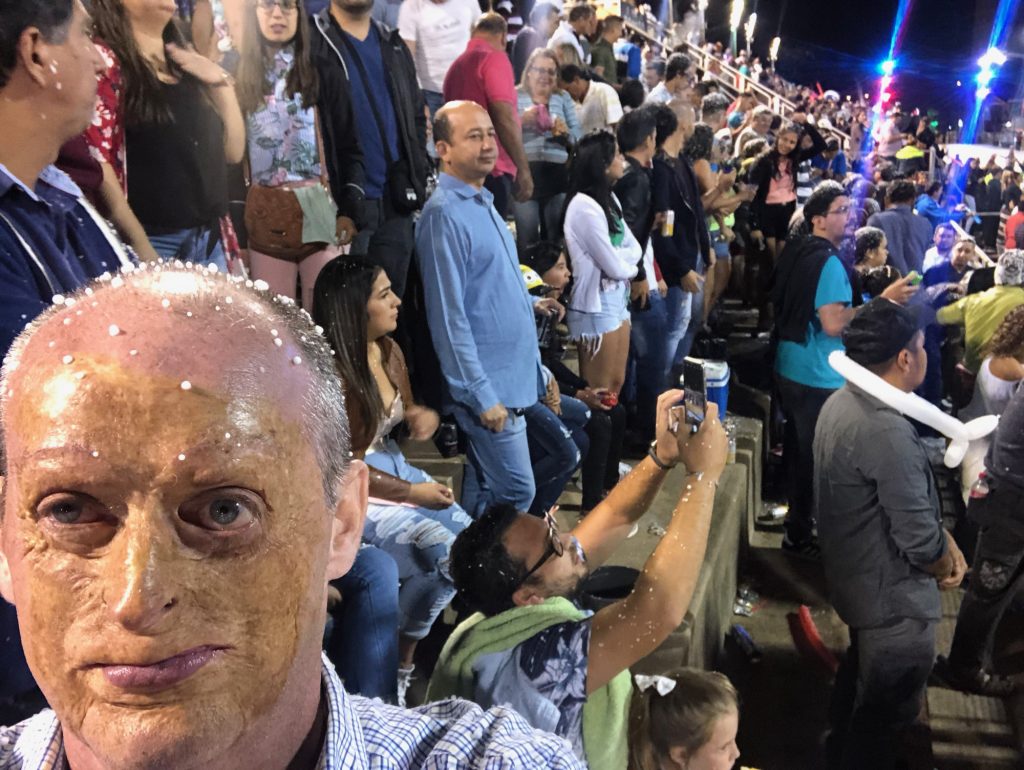 Between the foam, the dancing, the constantly changing music and the warm evening a real party soon got under way 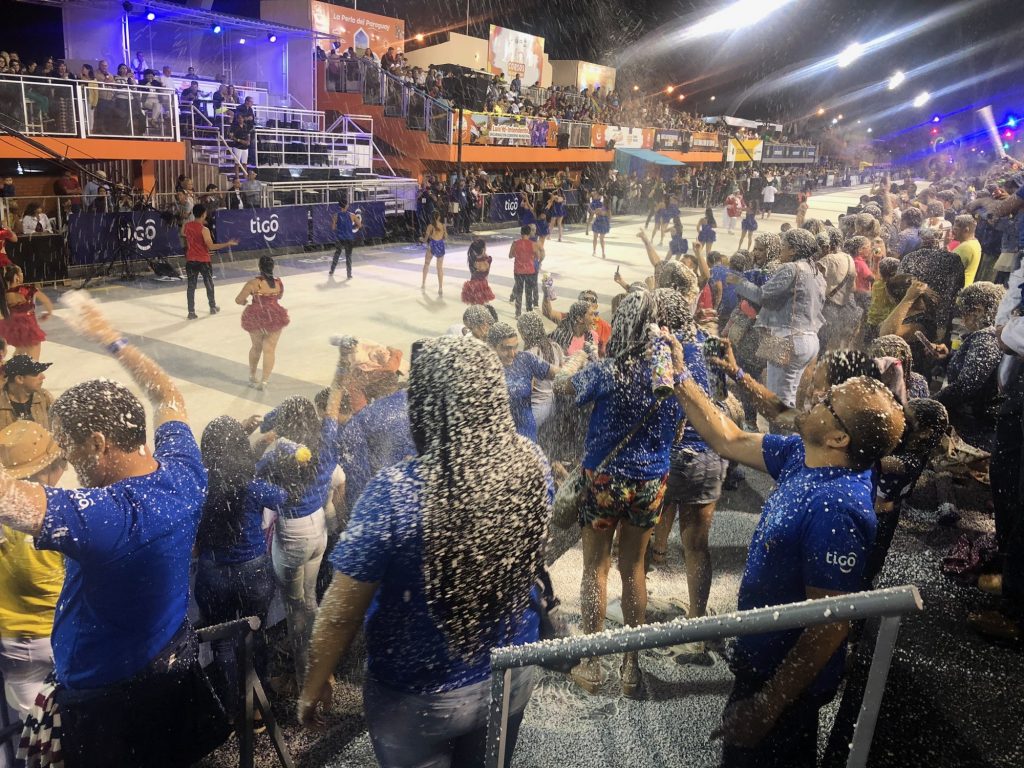 There were all sorts of floats and costumes, which went on from 9pm to 3am, 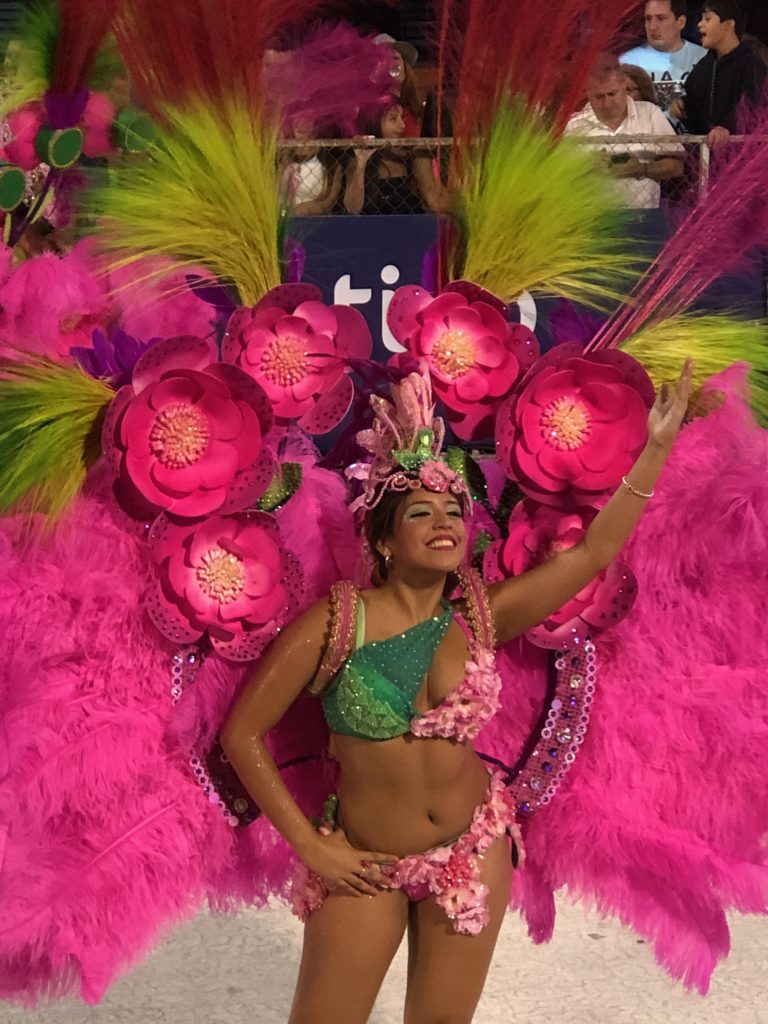 This lady was up to win the most flowers competition 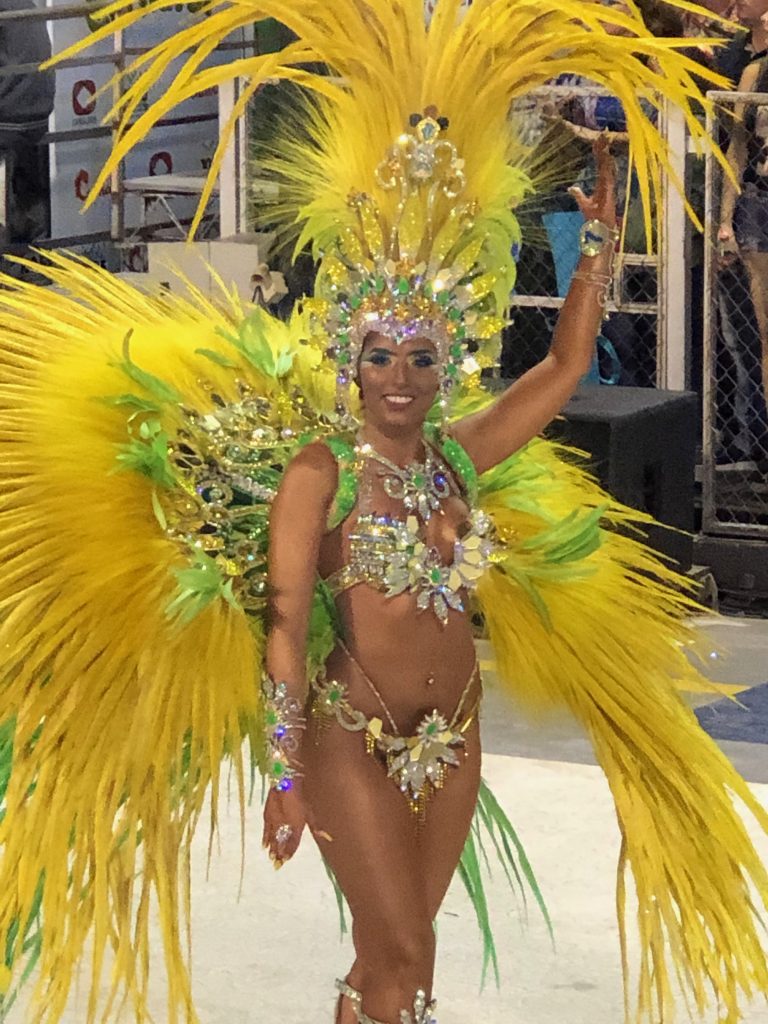 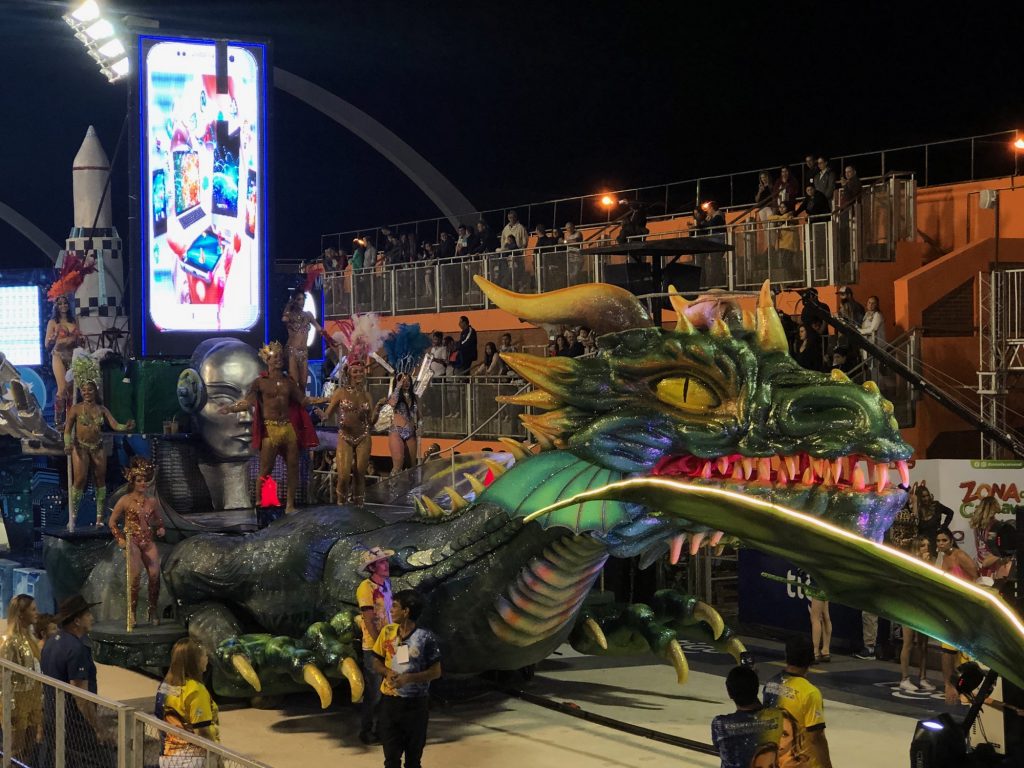 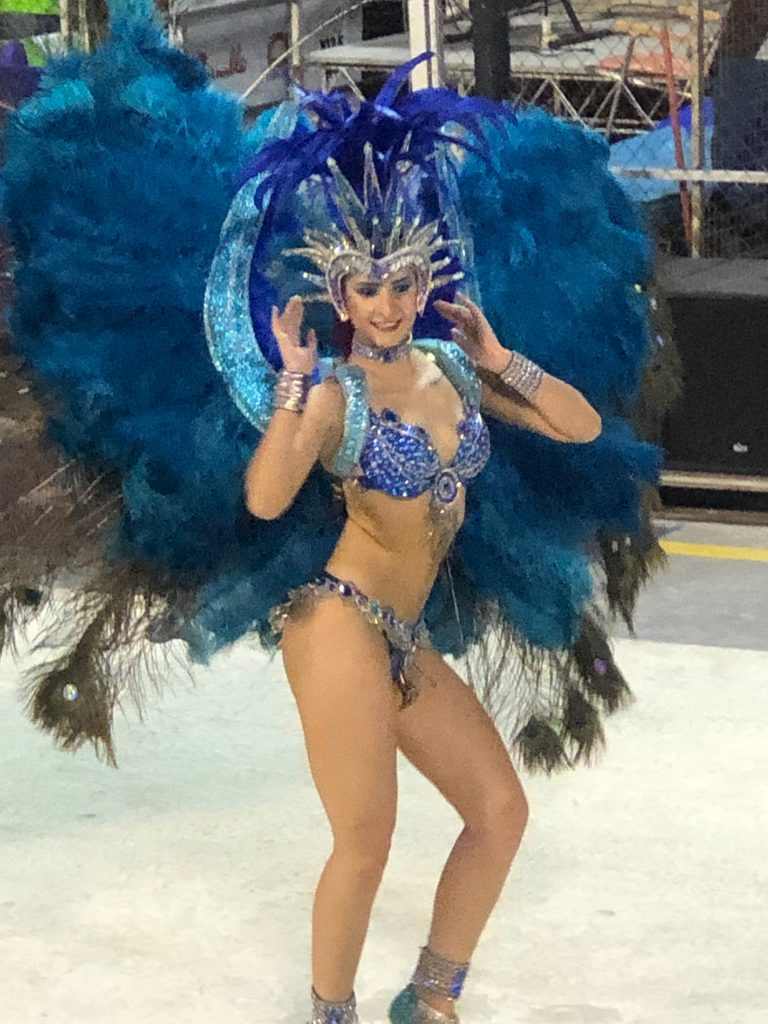 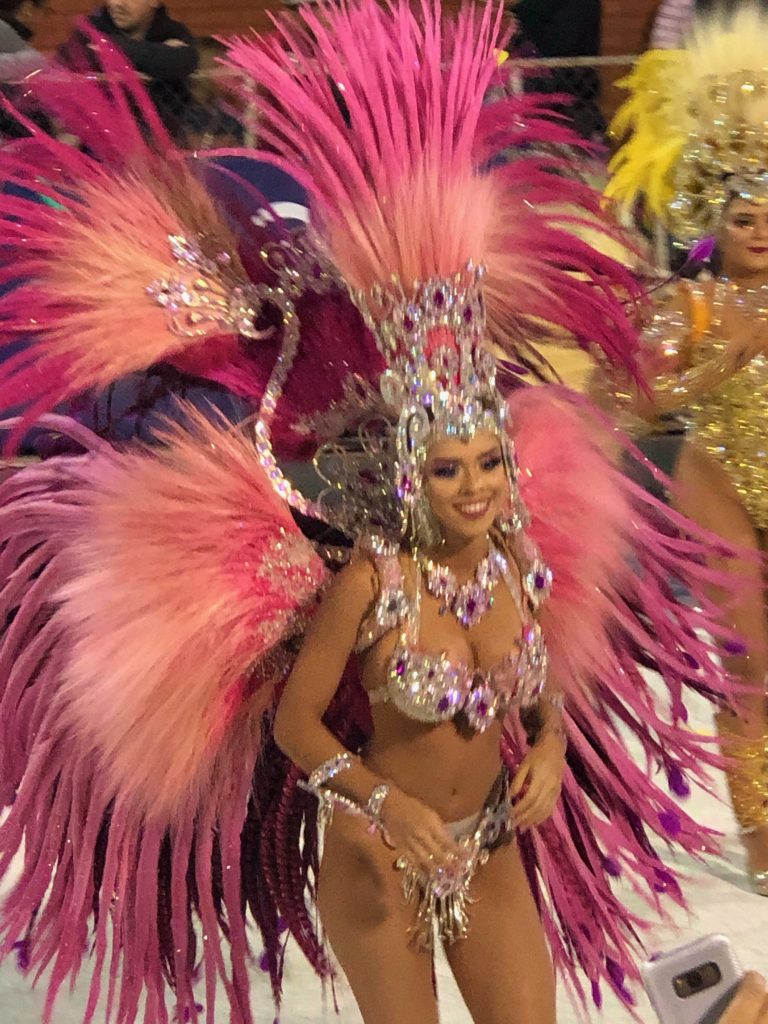 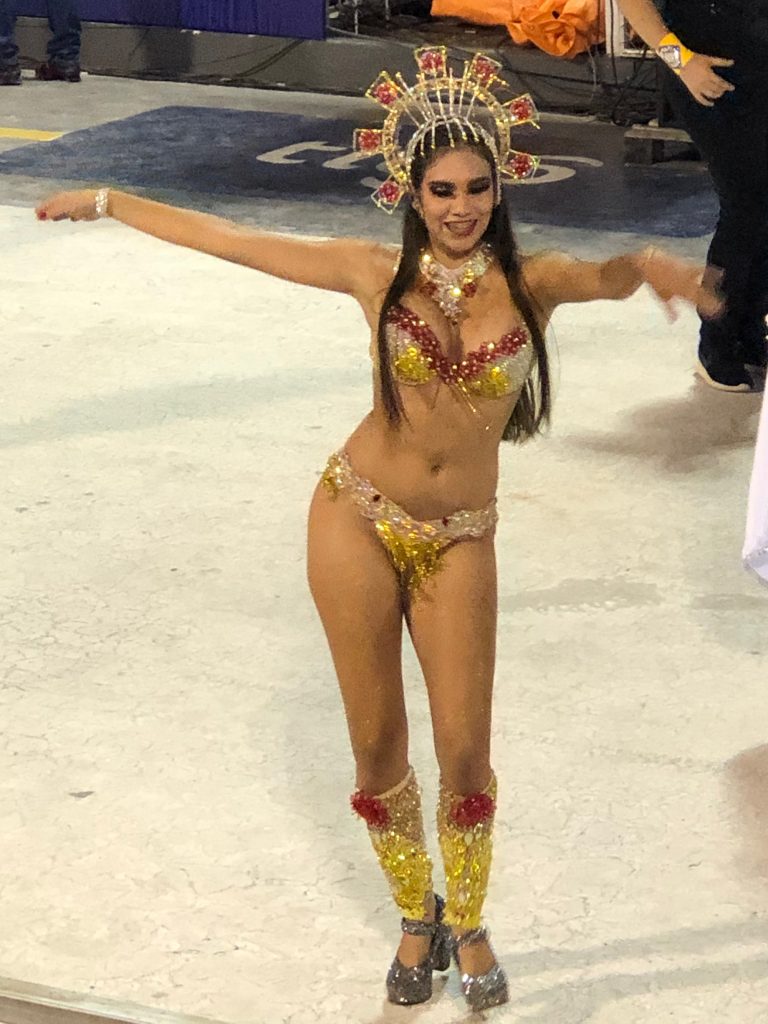 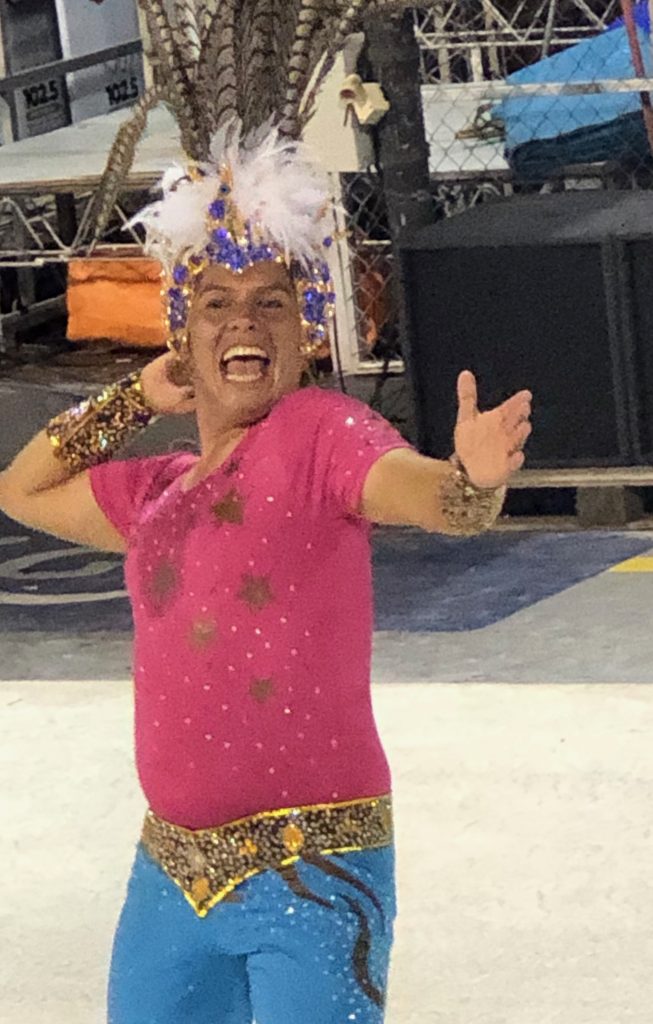 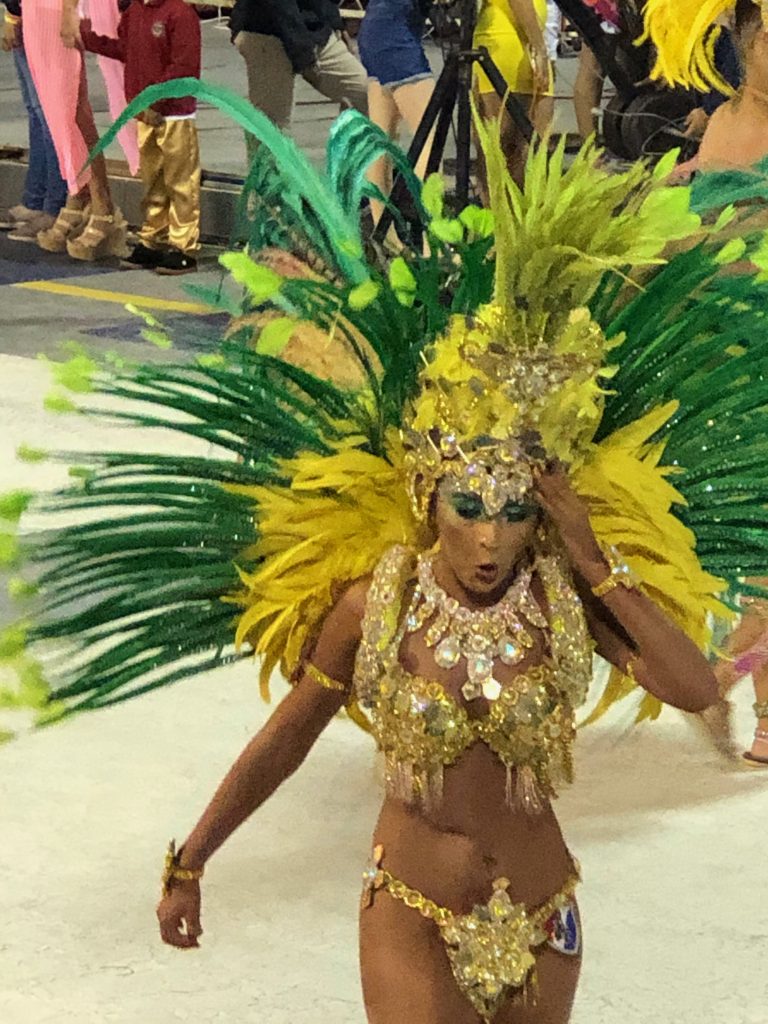 The basic idea that I had about this carnival turned out to be true, it was friendly and accessable, when the dancers were not in front of the judges they stopped for selfies with their friends in the crowd and we could get waves and wander around to see the whole production 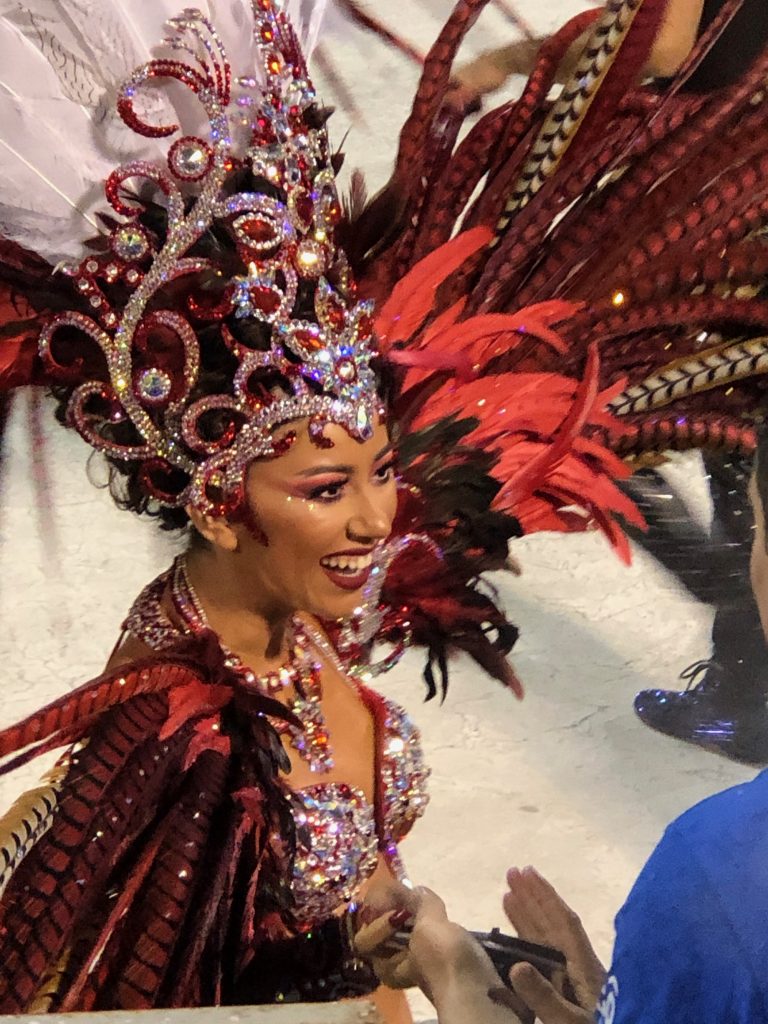 The dancing lasted for five hours constantly in the end, and we could get behind the scenes here a collection of discarded headdresses was about to be loaded into a van. 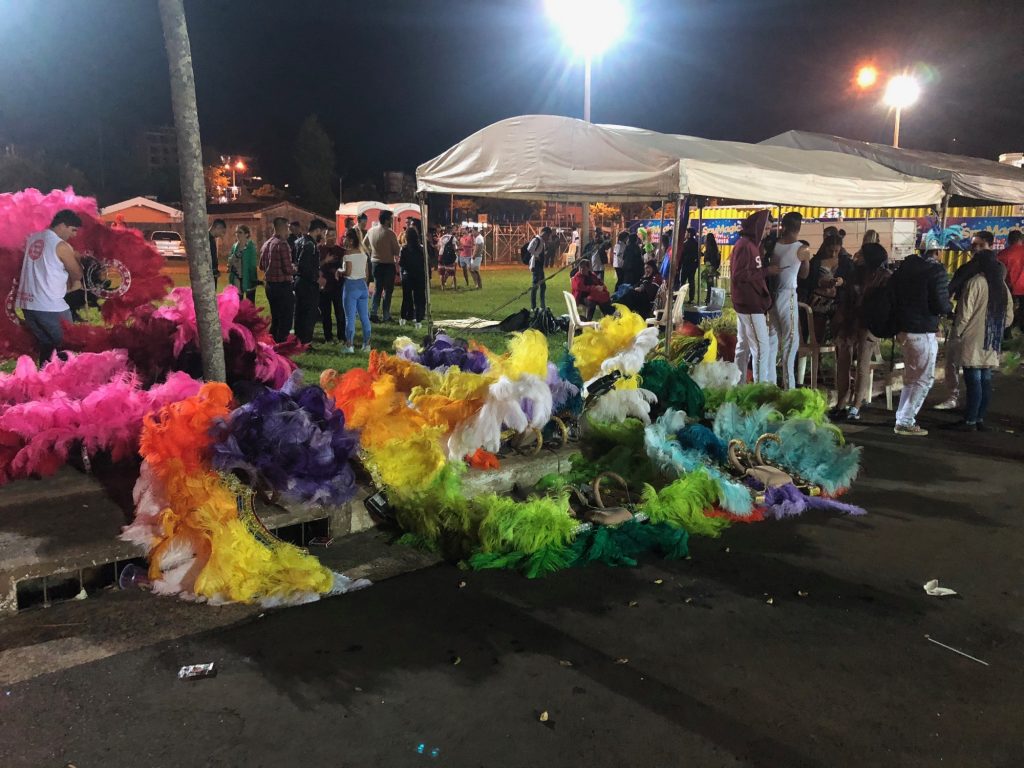 And to finish Tonys picture of behind the scenes for the boys, the cat girls were actually really good dancers, if I ever learn how to upload video here you will be able to see the dancing in action 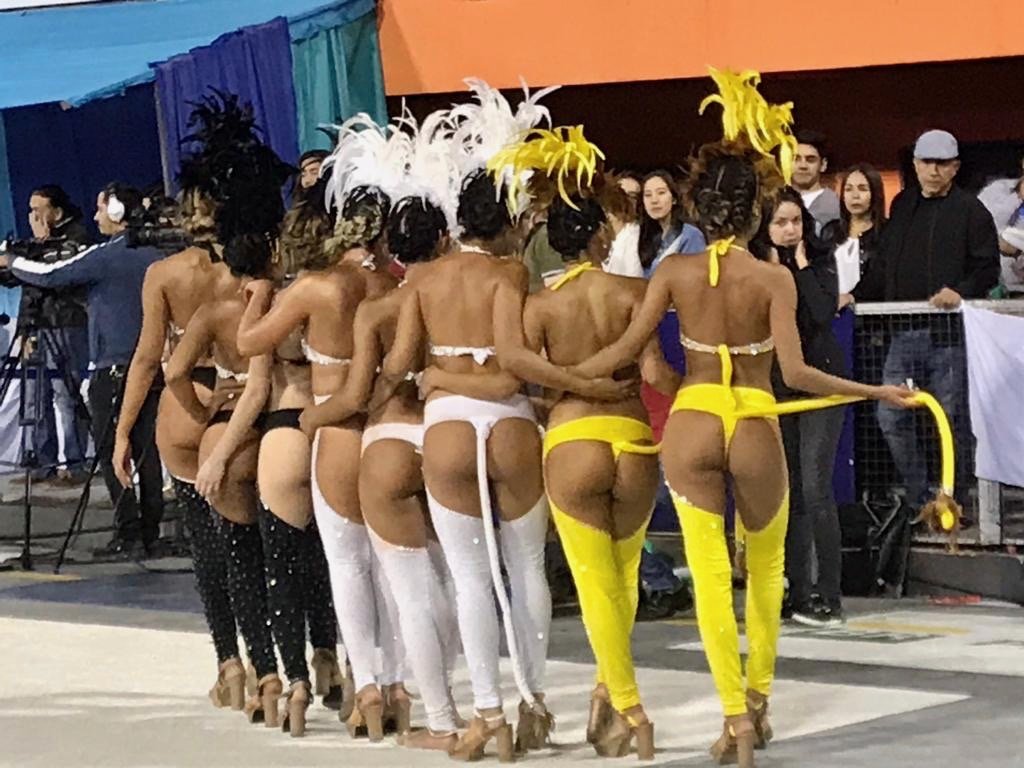 So in the end the carnival in Encarnacion was a roaring success, we left the young people to the all night disco and flopped into bed around 4am tired from the dancing and a little deaf from the constant loud music, but we felt like we had mixed in with the local people in a really authentic carnival were there were very few tourists and a great chance to see this tradition up close and personal, no need to be anxious at all.

As a additional point I had been concerned about pickpockets and safety before the event but actually I did not feel any more danger than going to a Rugby match in Scotland, in this type of carnival there is a great mixture of families, young people and even old folks like Tony and I so we did not feel any anxiety at all.

Previous Meandering up the river Uruguay
Next Missions and Falls, a few days in the Jungle