Meandering up the river Uruguay

After a week of travelling up really flat and unchanging roads we passed Buenos Aries (as we will return for four days at the end of the trip) and headed up the Rio Uruguay so we had the pleasure of long flat roads this time with the occasional forest of trees to break up the view.  This whole side of the continent seems to be an endless plain but at least farms, trees and forests do make the days pass more easily than on the infamous Route 3.  I was beginning to feel a bit sorry for Tony having had to endure this more boring part of the trip but things have improved markedly. 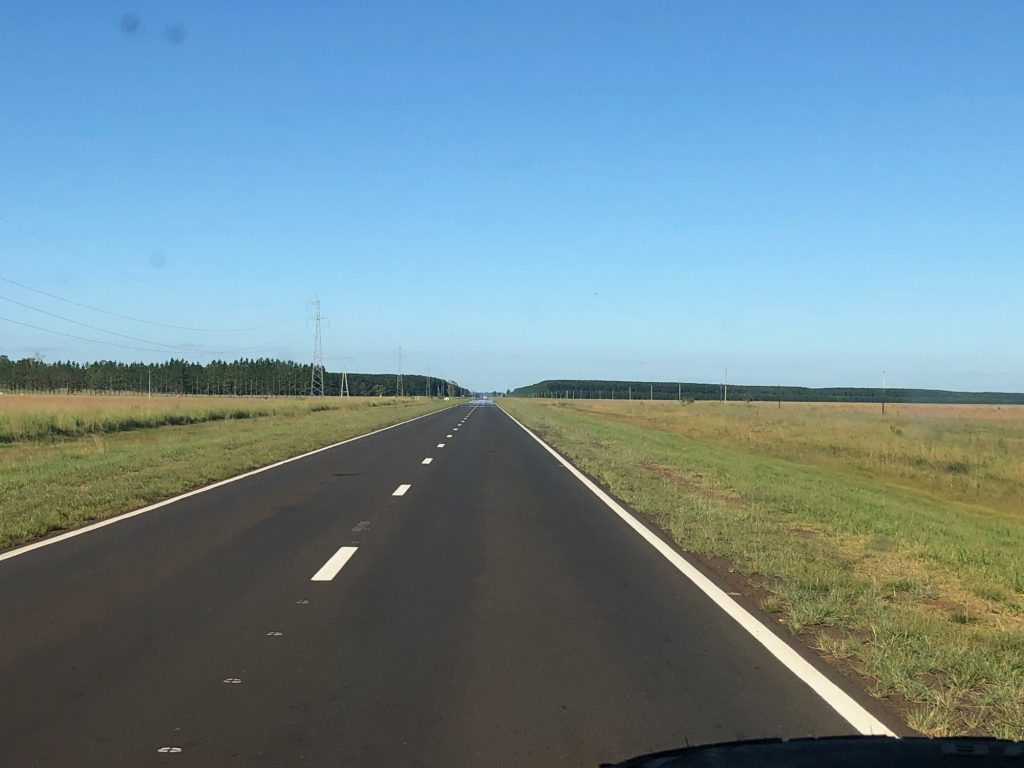 Firstly the rivers here are nothing like those we have in the UK, when I was in Ecuador near to the coast 2000km away on the far coast I visited the jungle, there we noticed that the rivers were flowing east into the Amazon basin and the river there was only 400m above sea level.  That is a very long way for the river to go with such a small amount of drop, hence even at that point the river was navigable and by the time it gets close to the coast the rivers are like lakes, hardly flowing at all and very wide.

So being far from the coast is no problem for the people here they just have beach life on the river instead, to all intents and purposes it feels just like a beach on the sea as the river is so wide, they have lovely sandy beaches and plenty of excellent sunsets to watch develop at the end of the day as you can see below.  In this one you can just see the far bank of the river from the beach at Encarancion where we have ended up for a few days 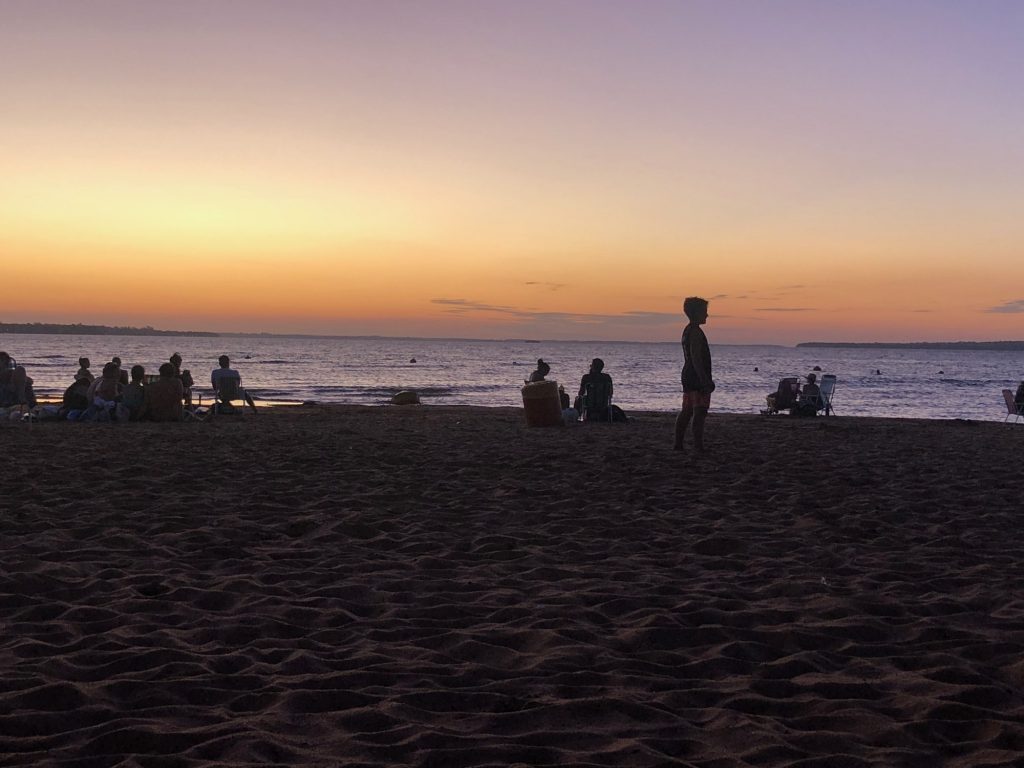 As we made our way up the river over a few days this was the typical morning scene when I opened the door at the river bank, a few fishermen quite successfully pulling fish out of the river and a typical barbecue just at the camp spot to cook our steaks in the evening along with the other campers. 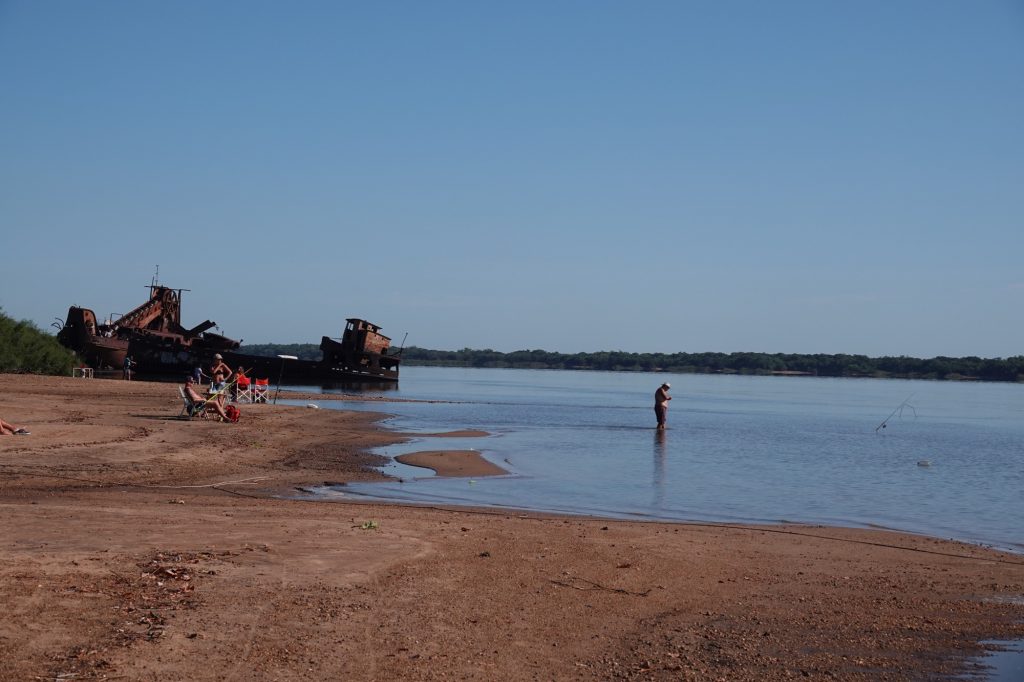 The awning is in use in this case as a sun shade as the sun at midday is pretty fierce so we are in the land of siestas from about 12 to about 4 almost everything is shut and the restaurants at night only open around 8pm, somehow sleeping for an hour in the afternoon is growing on me and beats driving in the heat for sure ! 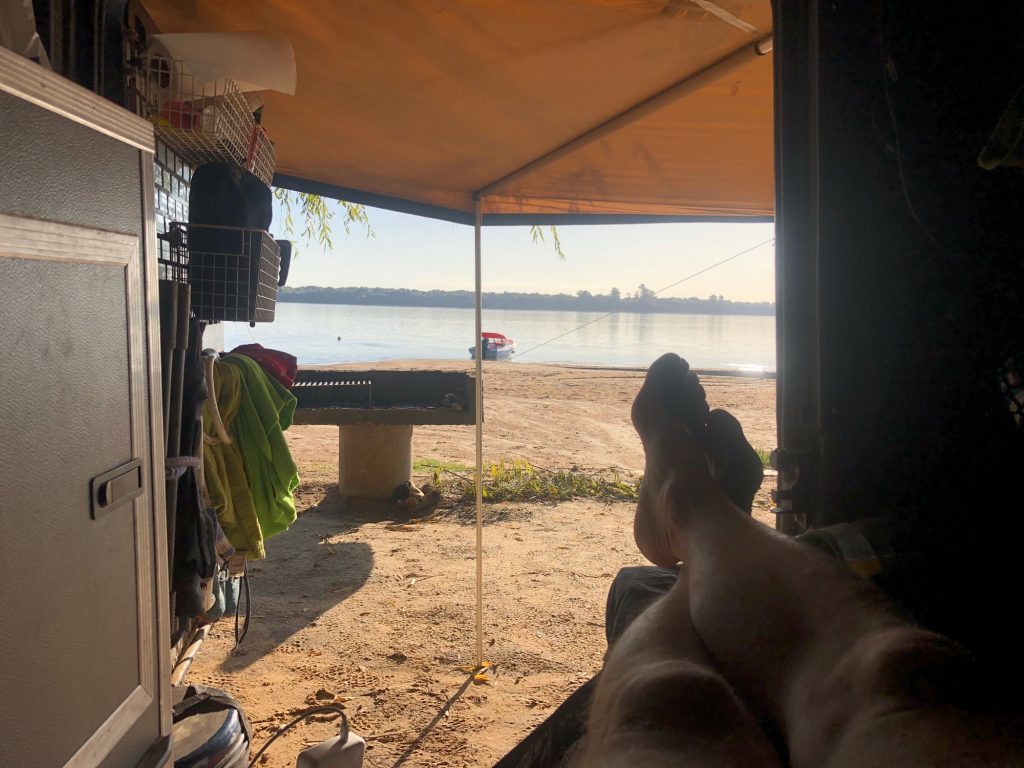 Although it has been lovely weather here for most of the time we do occasionally encounter proper full on tropical rainstorms now, in fact there has been bad flooding just further north in Brazil, so one night we had to cook in the truck and just have an early night as the rain was so severe it was like standing in a warm full power shower.  Holly reminded me that at least it was a warm shower and not a cold one like they were having in Scotland with storm Dennis so a good tip for me to work on my gratitude from her. 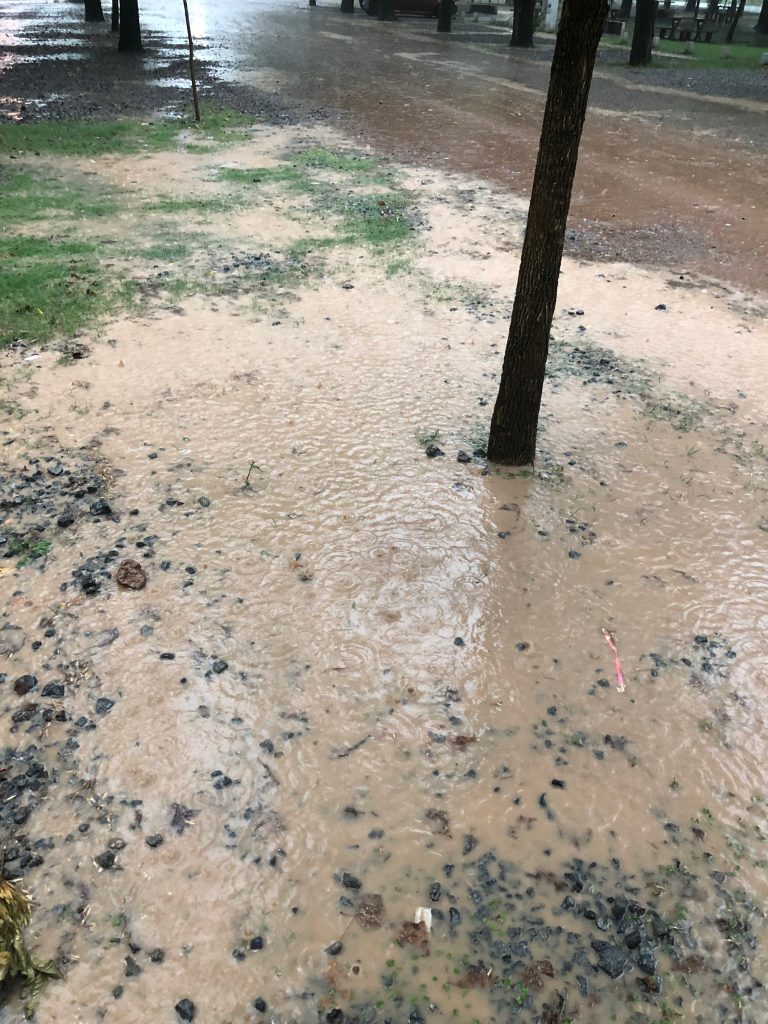 Never the less order was soon restored and the next day we were able to cook outside the truck as usual as the sun set, we are now moving so far north that the sun is setting about 7.30 in the evening and rising at 6.30 so the long days of Patagoina are becoming a memory, long days really help with camping as its much easier to get things done in the evenings and sitting outside is more enjoyable – but here it is compensated as the temperature is just perfect, about 26 in the mid day, 22 in the evening and dropping to 15 or so at night which is great for sleeping.

Having seen all the folks here sipping their Mate drinks at the beach I decided to give it a go myself, unfortunately i cannot use the traditional Mate cups, which filter the Yerba plant leaves as you drink, as they have a steel straw that I can not seal with my childhood injury to my lips, so instead I have repurposed my coffee press as a Mate press, put in the Mate and press down to get the drink which is like a bitter green tea, apparently full of caffeine so I am trying it out bit by bit to make sure I can still sleep at night. 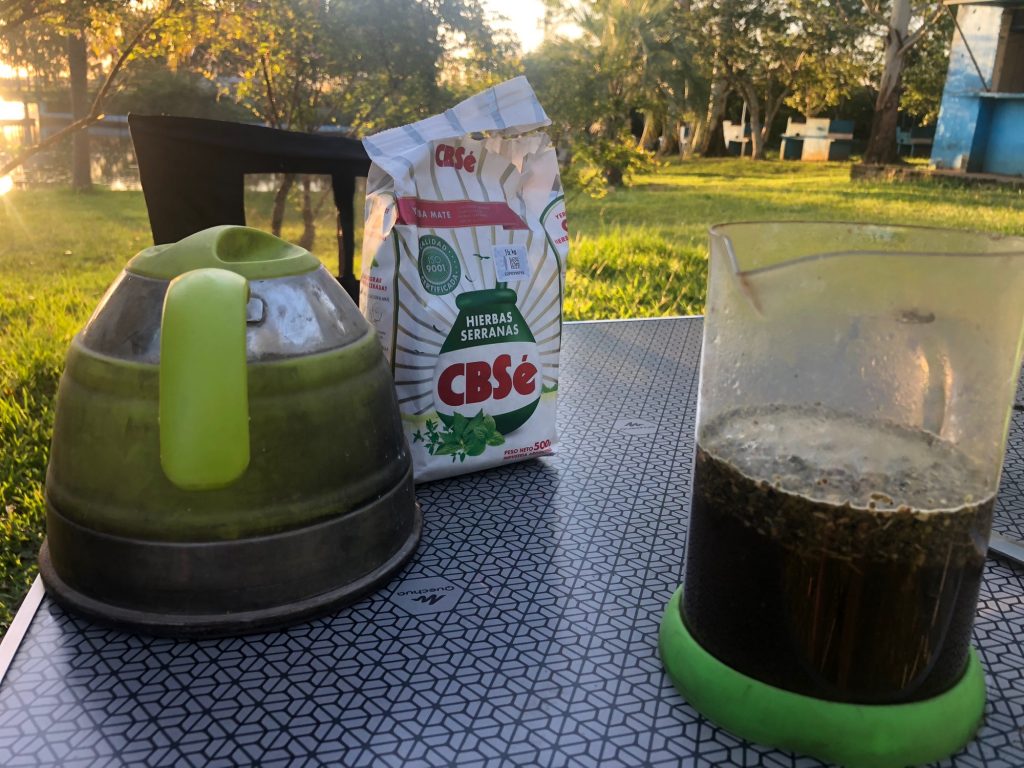 With dinner cooked and sipping Mate from my cup it was time to watch yet another great sunset over the water again, river life is not too bad for travelling 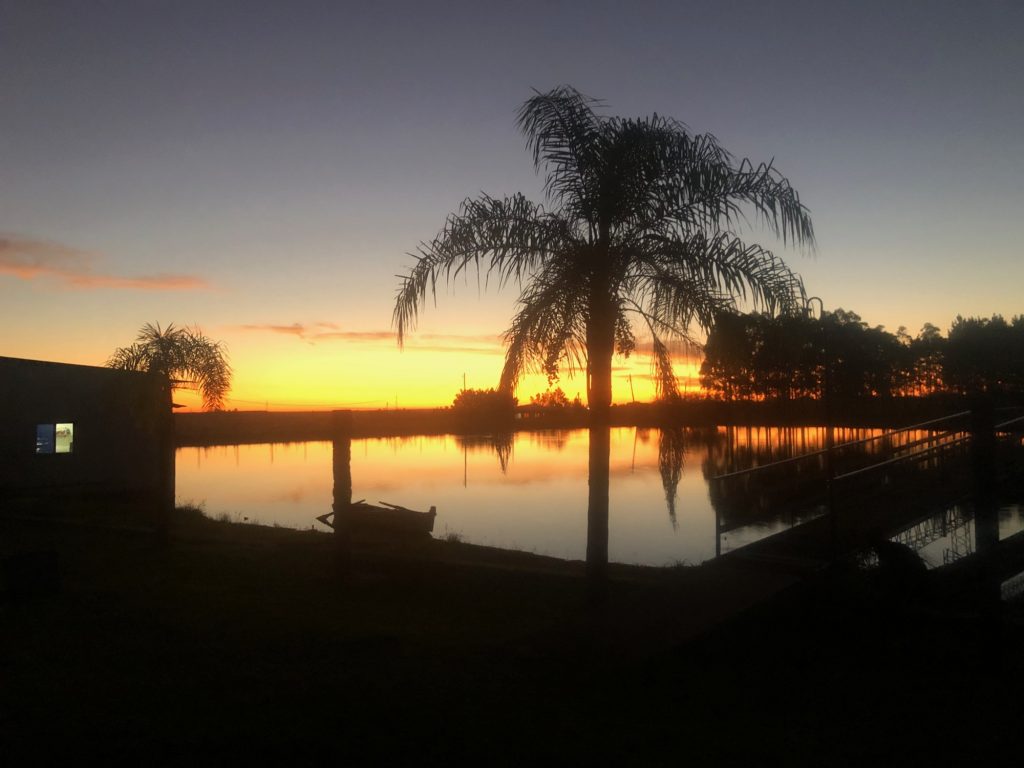 We have become anxious as we drove up the river towards Encarnacion in Paraguay that we may have under researched our approach to carnival, some of our facebook friends were reporting hotel prices of 600USD for the night and the impossibility of getting tickets for the actual competition. Thankfully a tip from Lonely planet had directed me to Paraguay and the small city of Encarnacion where the new Sambadrome has been built as part of a waterfront rejuvenation and hosts a pretty wild carnaval but which is supposed to be still very accessable and not touristy.

We found Paraguay to be noticeably cheaper and a bit more “wild west” than Argentina, the border guards were on lunch for an hour, and then only one guy knew how to handle a foreigners car, the streets are a bit like I remember China 25 years ago, all friendly, but pavements that do not join up and areas were the streetlights do not quite work and patches of waste ground or half finished construction.  I get a real feeling of a frontier town and I am pleased about that as Argentina was a bit like driving in the USA or central Europe, this feels more like exploring again.

So thanks to being out of the main tourist routes again we have a lovely hostel, with Nelson parked and padlocked up in a secure locked driveway, outside the twin bedroom we have for 30USD per night on carnival weekend ! Oh and we have grandstand tickets right beside the judges for the Sambadrome on Saturday night for 20USD !  We are very relieved as getting the tickets was still a bit tricky but we are all set now. 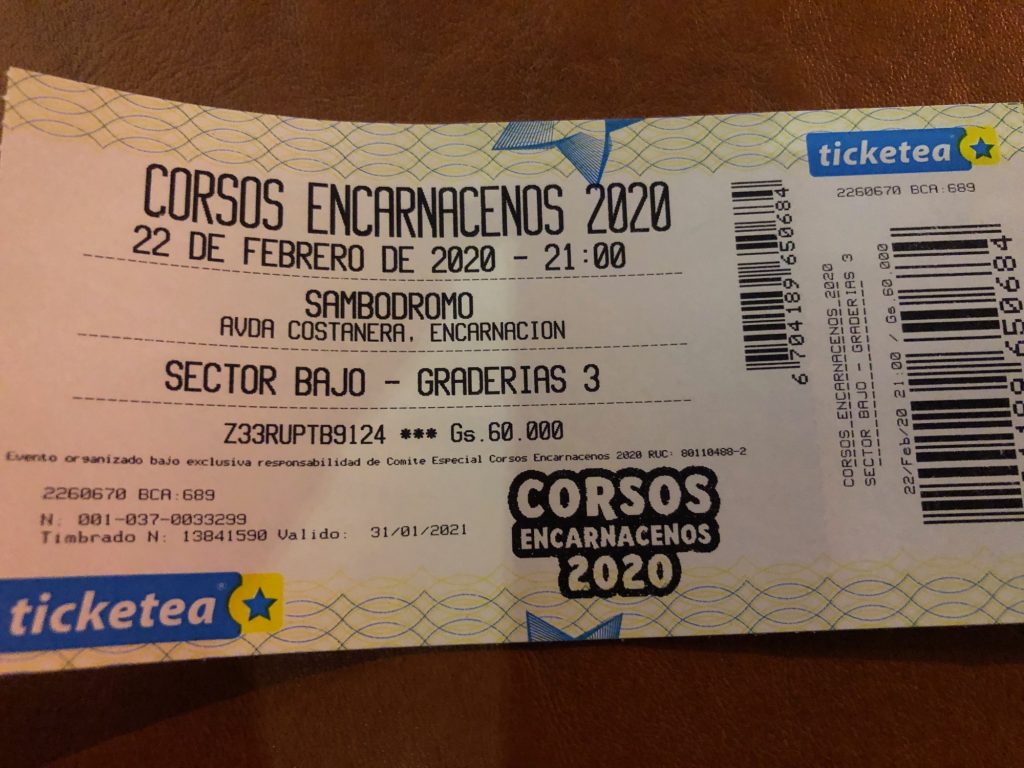 Now carnival is supposed to be a bit of an all night wild party and so it is one of those occasions were we have to think about security of our stuff.  We are developing sun tans but are still a bit white so when we go to the beach these days we have a “stealth mode” so we blend in with the locals, this involves flip-flops, swimming shorts and a carrier bag as you can see below in the picture of me on the riverbank beach.  In the bag is shirt, towel, but also a very thinned out wallet, phone and my internet hub. 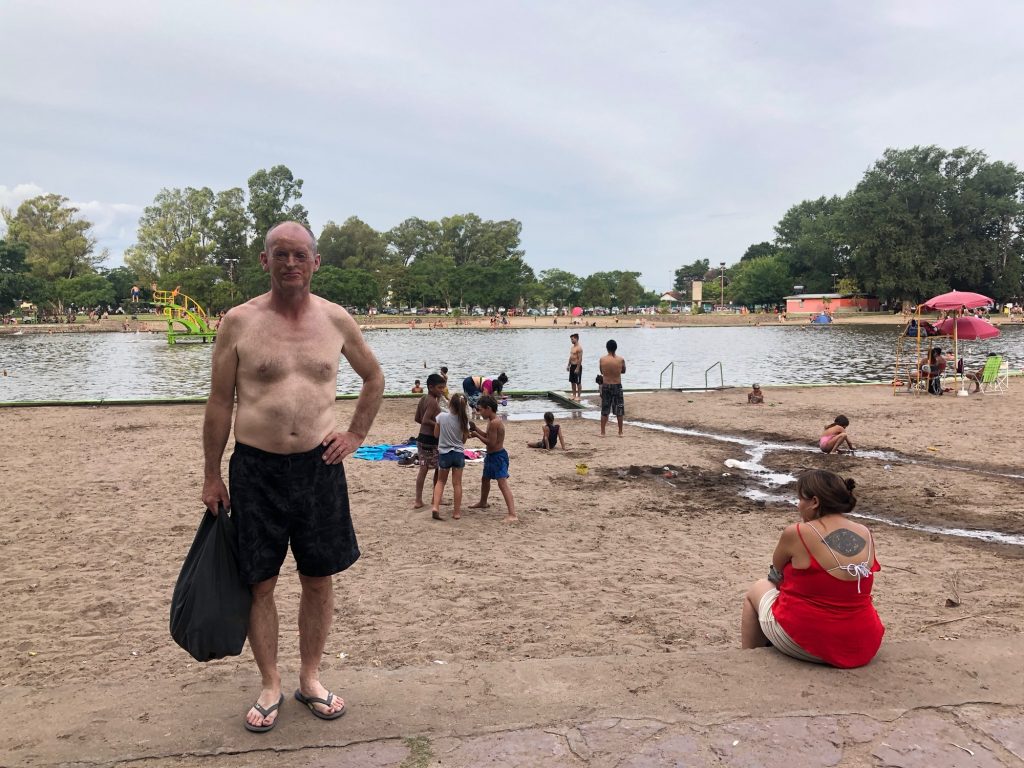 In the case of carnival shorts, T-shirt, in the zip pockets a phone some cash and one card only will be all I take out with me while Tony has the dilemma of his big “rob me I’m a tourist” camera which may be taken to the Samadrome and then dropped off at the hostel, so we are looking forward to blending into the dancing crowds and a long party night on Saturday !

Previous Sea animals, some with beach umbrellas
Next Carnival…dancing shoes, not much else