It has been an interesting element of my trips that I have had different friends join me on these trips as well as Lee.  In the early days Colin Muir was my first passenger as we ran a half marathon in Belgium and then took the bicycles around the battlefields of the first world war.  On the second trip Duncan joined me and three other land rovers in Morroco with Lee and Nick doing the European legs and the last shakedown trip was with Lee round the Baltic states, Russia and Scandanivia.  Lee and I did the Balkans and Kazakstan before Tony joined me on the high altitude and remote leg of my last trip.  Tony was critical to that trips success and various hitch-hikers and even my godson and Nephew Christopher came along for smaller parts of the trip. Actually, I did not know Tony particularly well before the Roof of the World Tour we had met a few times at the Overland show and we seemed to get on well but it was a risk to commit to spend a lot of time together in a small truck in pretty arduous conditions.  It is a testament to the good nature of both of us that we got on so well even when facing breakdowns in the desert or the challenges of the Wakan valley.

The advantages of travelling with a friend for me are

However there are downsides to traveling with a friend

Never the less having done a good bit of both types of travelling there is no doubt that on balance travelling with a friend is more enjoyable, and safer if you get sick, specially on the remote parts of the trip.

Nelson is a bit small, as overlanding vehicles go, you do need to climb around each other and take turns at sitting inside in the back or the front to be comfortable.  The one thing that makes it all work is the fact that there are two sleeping “rooms” in the truck, and they can be fully separated, so when my passenger goes to bed and closes the hatch to the upstairs we have some privacy and can read or blog or listen to recorded shows independently, this is an invaluable asset when it comes to having a bit of private time in each day.  The downside is that I have to be the last one to bed and the first one up in the morning so no lazy lie ins for me when I have a passenger!

On this trip I did the first two weeks alone, including having my accident and meeting my lovely Colombian friends (a good example of the points above, as I do not think they would have stopped if there had been two of us). Once I got to Bogota I picked up Errol for a four week trip to Lima.

I got to know Errol as he actually built all the camper part of Nelson, including the interior fit out and the Icarus roof but not the mechanical work which was done by Gemm 4*4 in Falkirk.  After my truck was fitted out I used to take it to the Overlanding show in the UK and put it on Errols stand as advertising for the great work he did in making it, my truck was the third one he had put the Alucab Icarus roof on, so I was one of the early ones, eventually he did many more and converted his own truck to a similar design so we became friends, but spending a whole month together is a whole new level of interaction and of course there is some risk in that.

In reality Errol was a perfect companion on the trip, we have similar tastes in talking, so we are both comfortable with periods of silence on the long drives, we both like the adventurous routes and are not too keen on well-developed cities and tourist hot spots so we were able to adjust our plans to both our liking.  In the whole time we spent together we got on very well, no cross words were said and we had a lot of fun with a number of running jokes involving searching for good coffee, pastries and beer carrying blond German hitch hikers (not that we would know what to do with them at our age, but it was an amusing mirage to keep us going on the days that went long and dusty, a bit like the old movie “ice cold in Alex”)

So when we got to Lima I was sad to say goodbye to Errol.  I think he was so “in the groove” with the trip that he was mentally ready to get in the truck the next day and set the sat-nav on a new destination, but he does not have the luxury of being retired so he has to head home to make some money!  It was funny as we went round the supermarket to stock up the car I could see Errol having to hold back suggestions as he realised he would not be cooking the next night but would be instead on a plane home.

I was very happy at the same time to see Duncan, we were introduced by our wives who shared a flat at university, and we have daughters of a similar age so we often holidayed together and he and I had a number of “boys own” adventures over the years including one of Nelson’s excellent shake down trips in Morroco with a good crew, a cannonball run across Europe in my old Aston Martin (sadly now sold) and setting a world record for driving through the most countries in 24hrs (answer 18 and the record still stands, the folks who did 19 took a plane).

Duncan had grown a especially tough looking beard for the trip and looks the part in his combat gear and jungle shirt, having just come off an all inclusive cruise around Spain he says he needs some lean days in the mountains to compensate.  Somehow Duncan got to Lima even earlier than I expected so he had two days to fill as Errol and I got caught up in some very bad roads in the eastern side of the Peruvian Andes as you may have seen in the previous post.

So here is Errol handing over the spare keys to Nelson to Duncan, pretending to be sad but actually happy having enjoyed his adventure 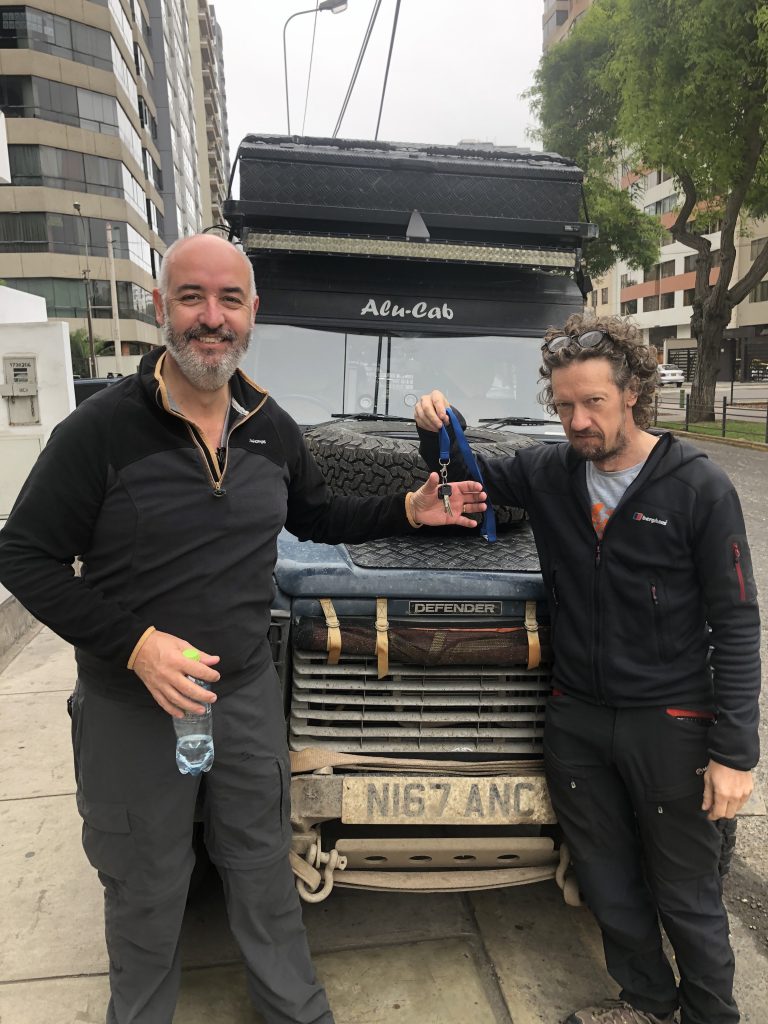 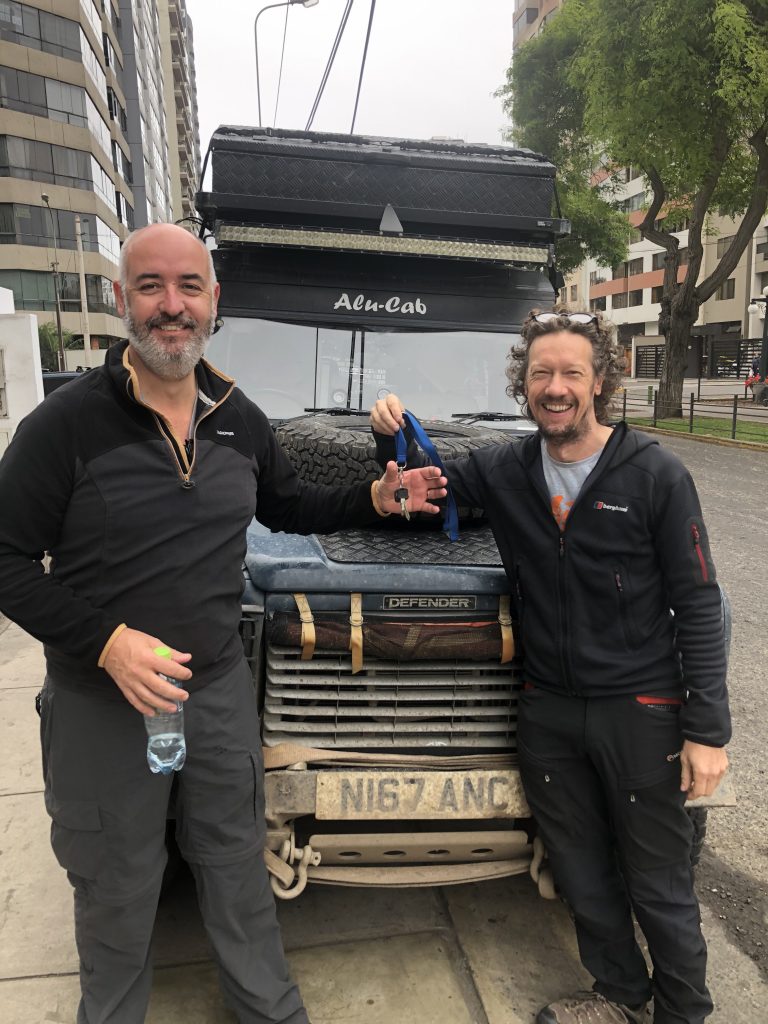 Lima itself was a fine enough place to spend a day or two, as Duncan found out as he had to wait around for us for two days (to be fair I had planned a Saturday pickup and we did arrive on Saturday), the three of us got on well and had some proper food in the nice resturants of Lima before Duncan and I set off for Parcas National park and Errol set off for the airport ! 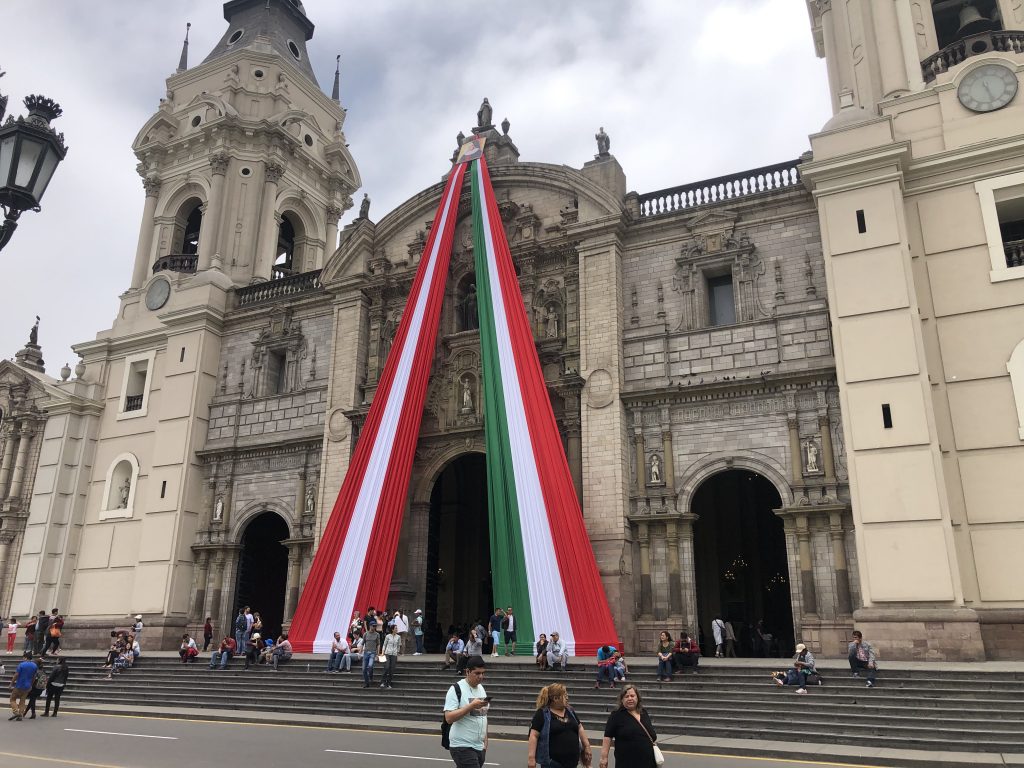 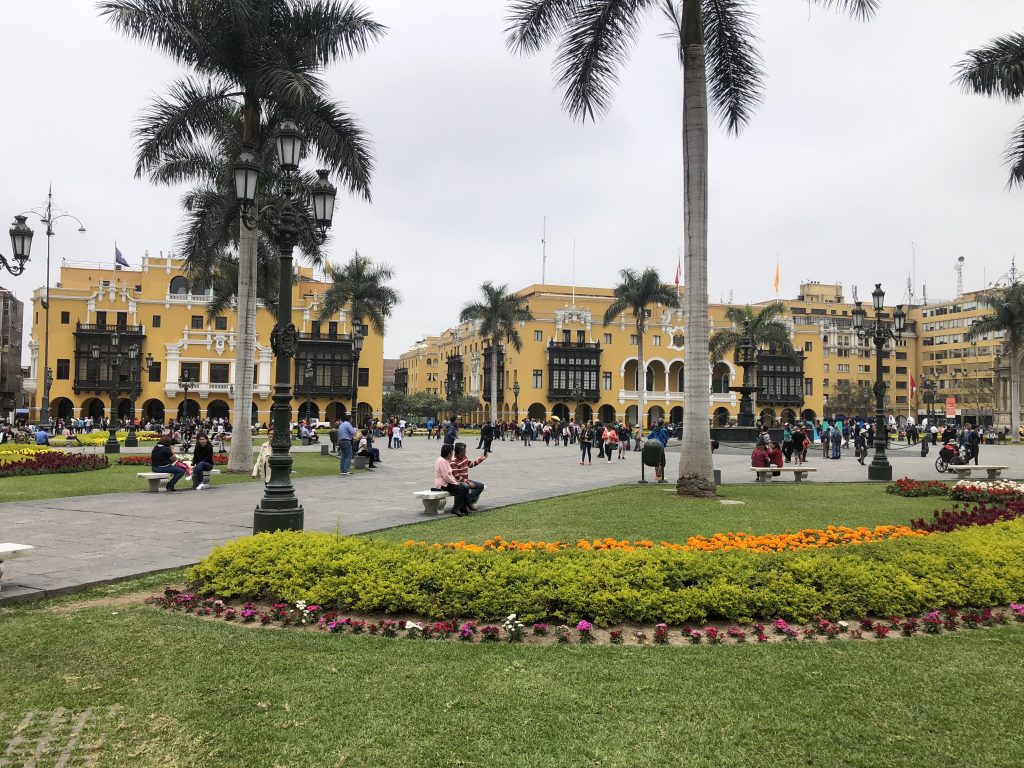 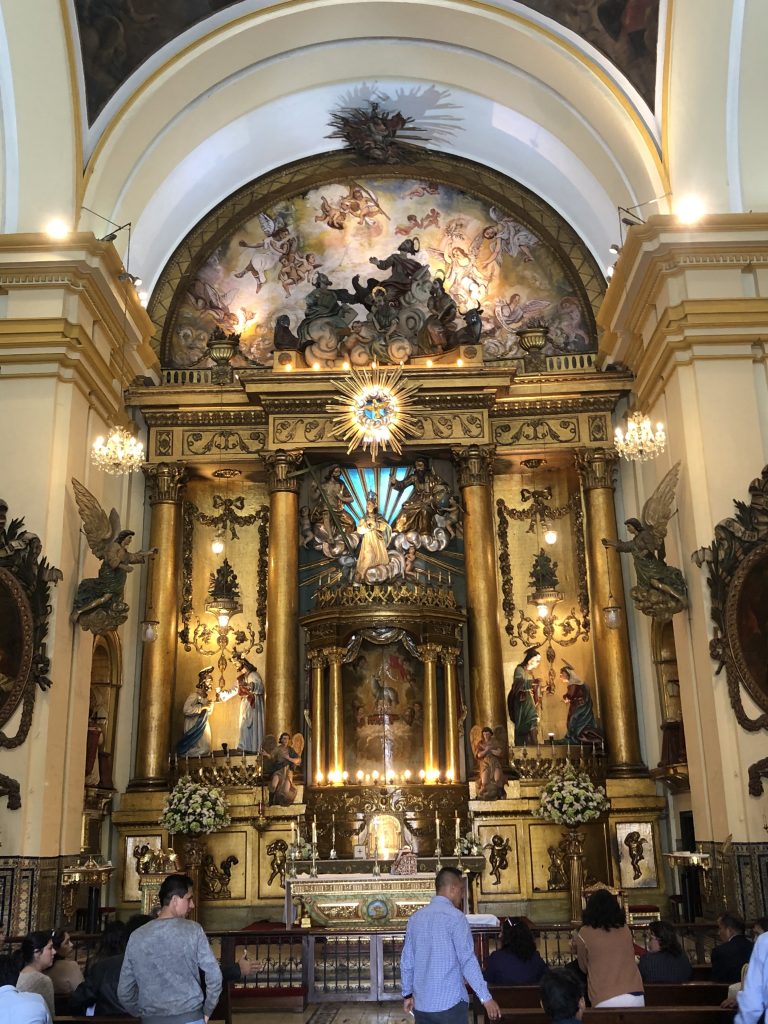 Once again as it was a Sunday and we wanted to visit many of the lovely churches I went to mass about five times, at least this time there was no Novena to finish it off as there had been the previous Sunday.

So thanks to Errol for being a great chum and an excellent companion for four weeks when every day was different and new !