I was a little concerned that the next portion of the trip with Duncan would be a little bit too “touristy” or tame, after all the run from Lima to the white city of Arequipa, the lake at Titicaca and then on to Cusco and the top sight of Machu Picchu is the classic two week Peru trip and the attraction of Machu Picchu alone attracts many thousands of visitors each day.  After exploring the remote Andes of Northern Peru with Errol and driving through a lot of working villages I was concerned that we might be tucked in with the gap year backpackers, Starbucks and MacDonalds.

With this in mind we headed out of Lima and it seemed that things in the south of the country are much better organised than in the desert of the north, in our first day we managed to find two really nice coffee stops and get the car cleaned and oil changed with remarkable ease as we headed to Parcas national park on the coast our first stop 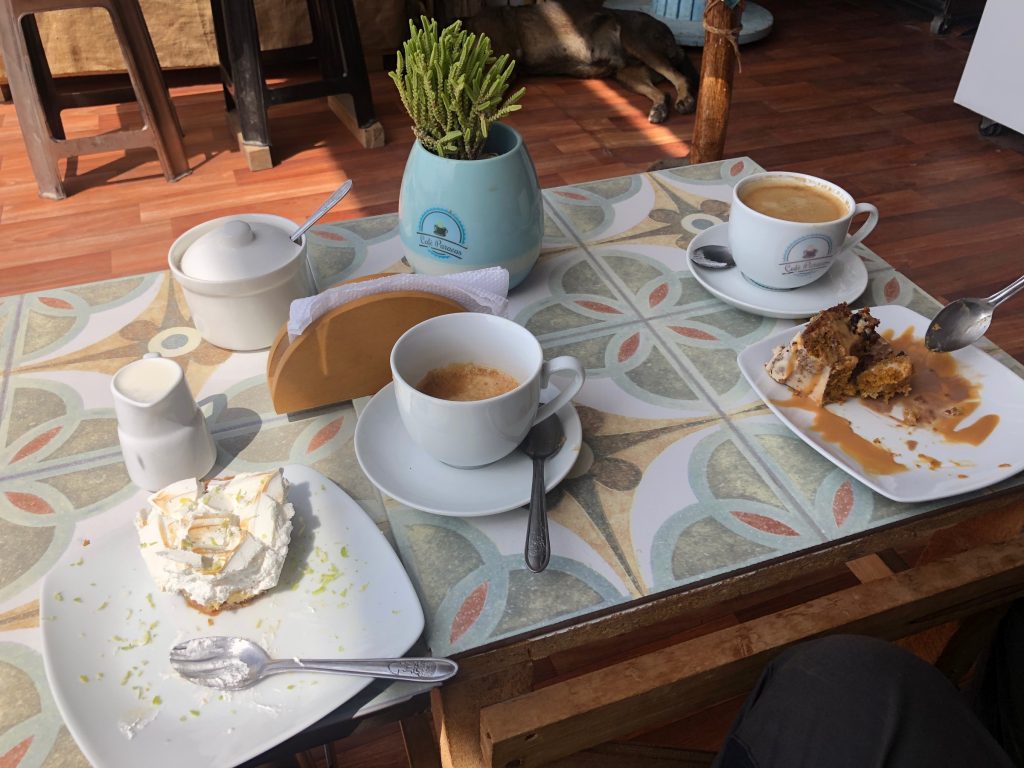 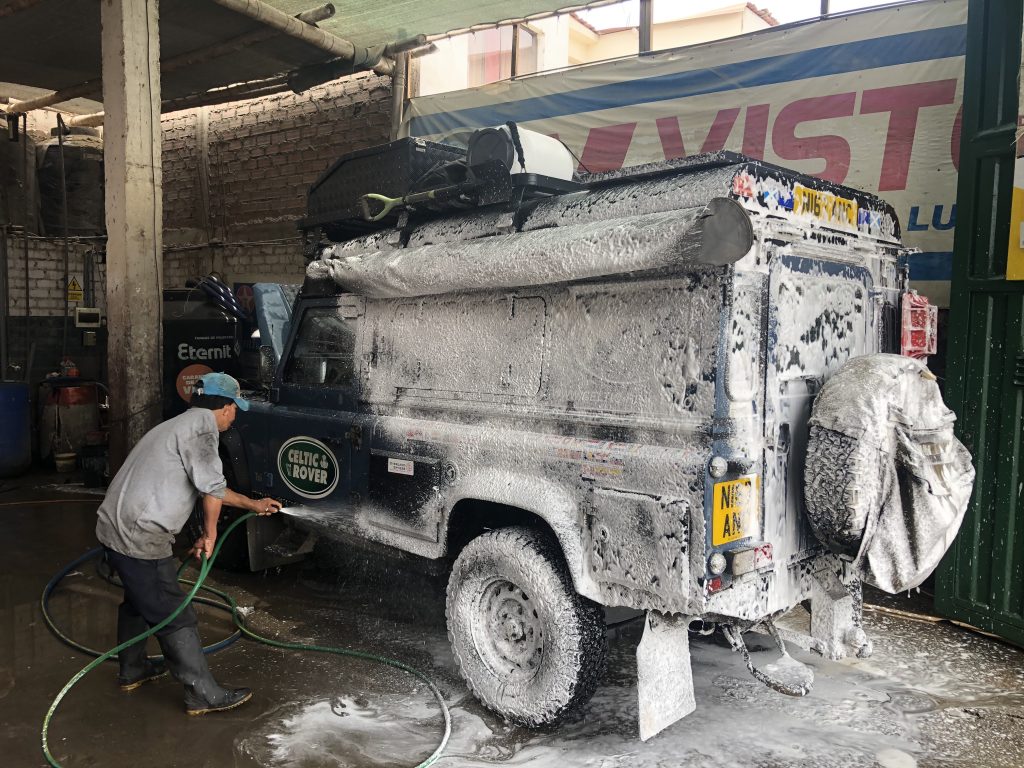 It seemed fitting to get Nelson cleaned at this point as the new passenger had to earn the mud and the scars of the next leg.

Parcas National Park was a very nice surprise, we arrived in the late afternoon to find some lovely beaches with Cormorants sitting happily on the rocks, we caught a bit of sun and then drove to a very nice sea food restaurant for our dinner of fresh caught and grilled fish as the owners are also fishermen. 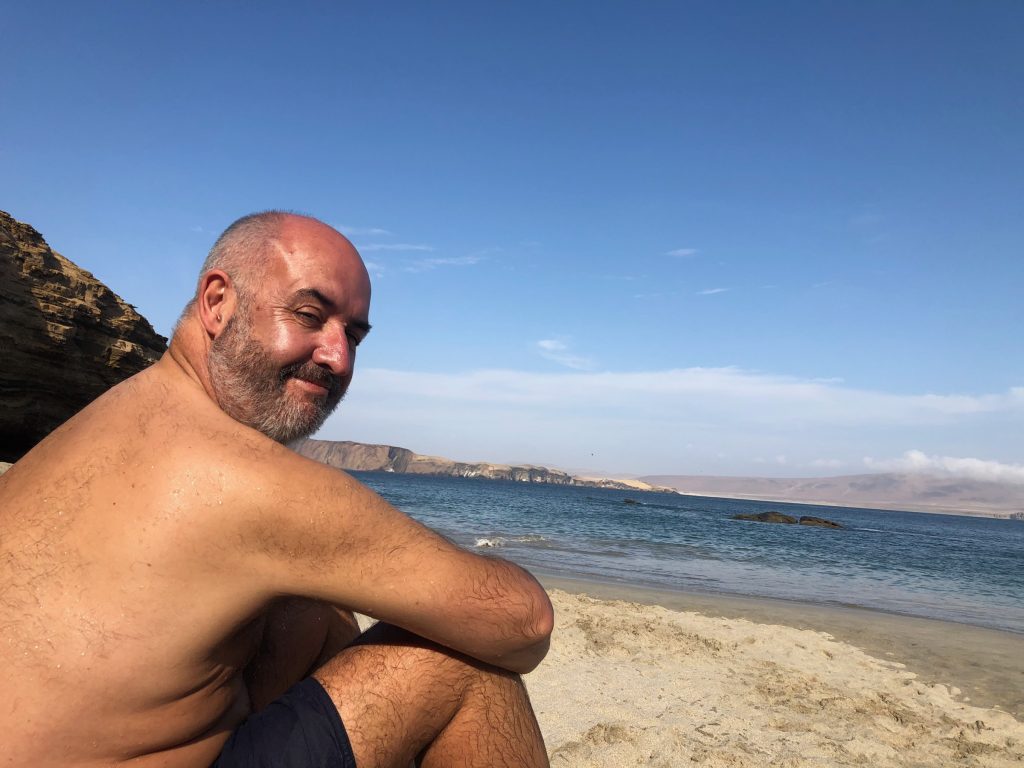 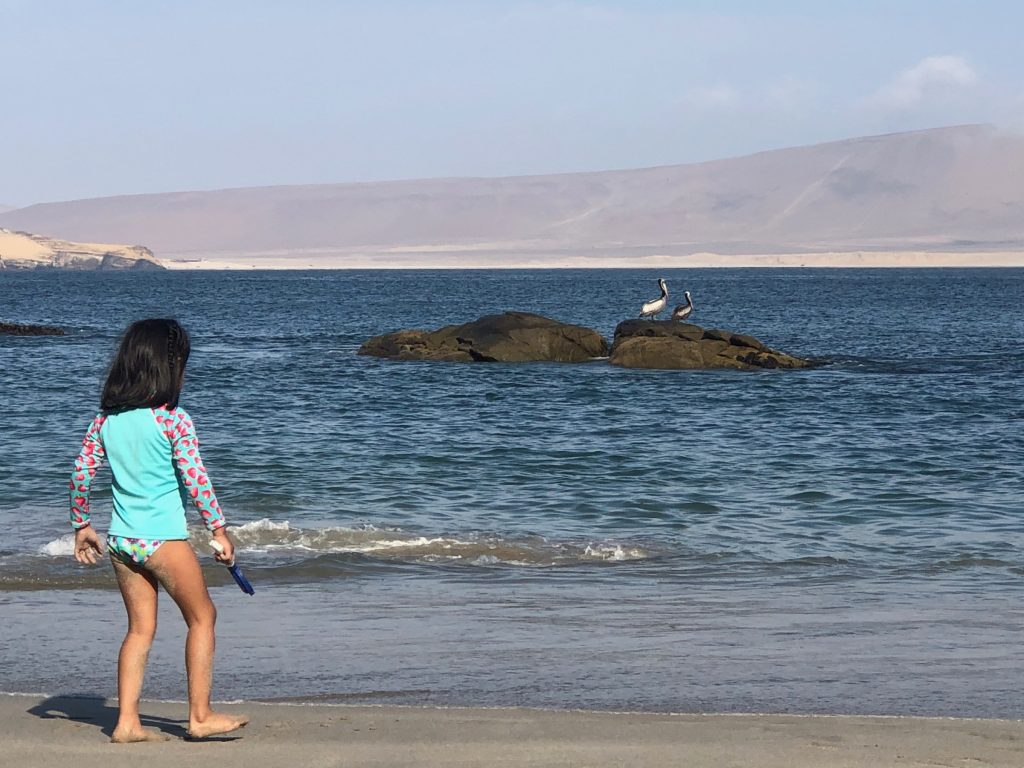 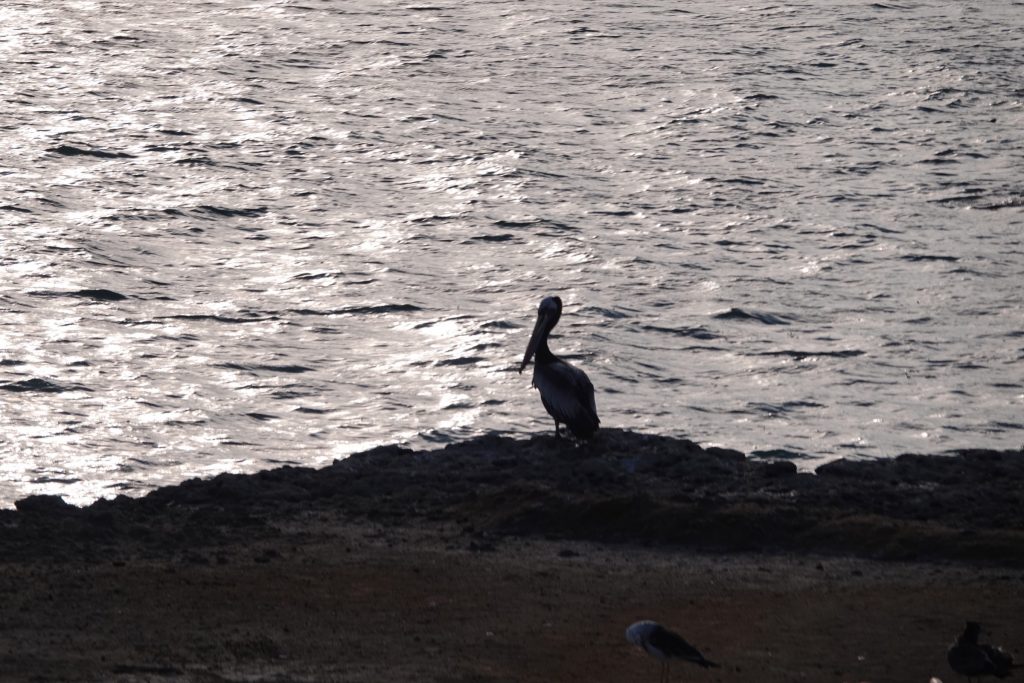 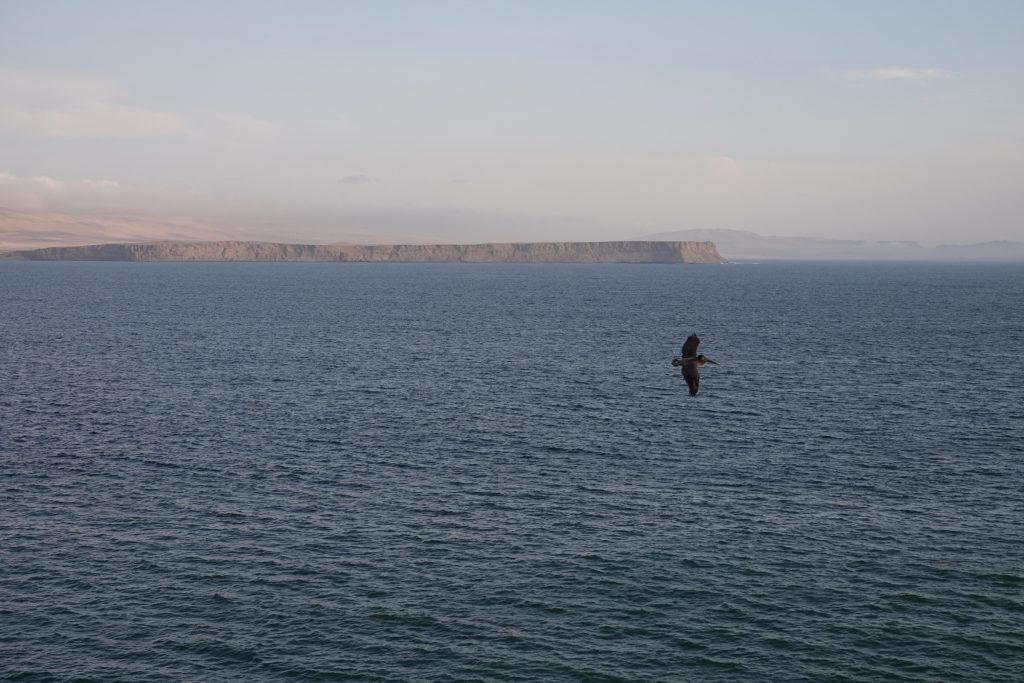 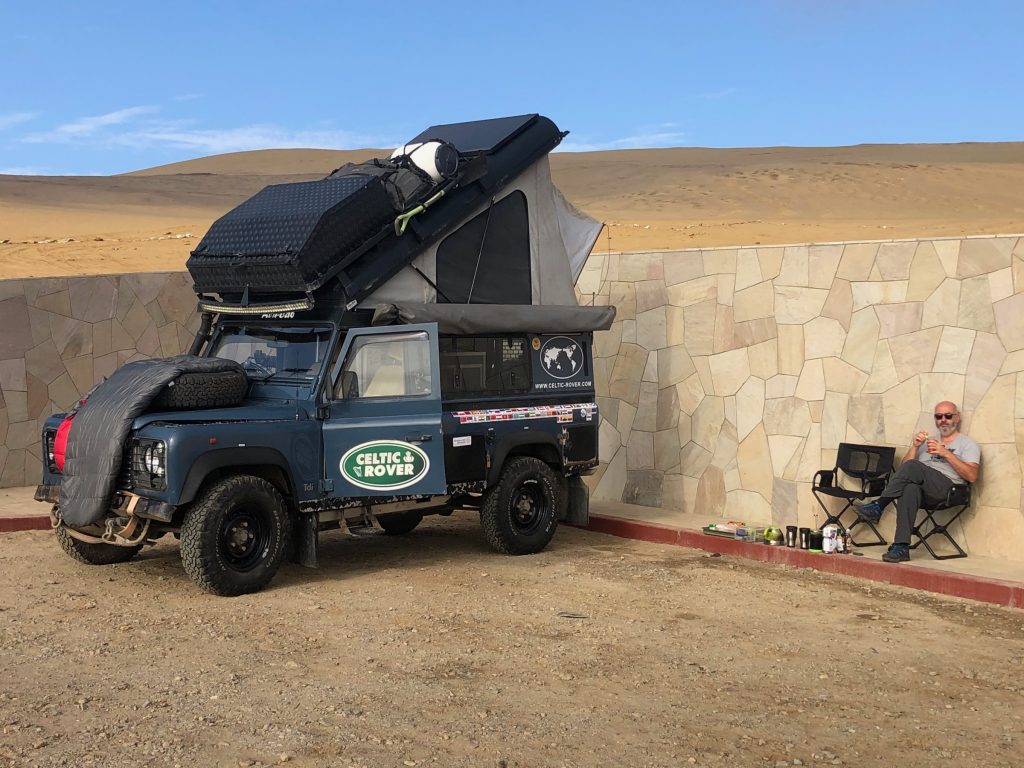 The car park at the beach cleared as the sun set and we were left with the view over the beach and the snorting of the seals on the rocks below, mixing with the sound of the waves to lull us to sleep, really we could not have engineered a better or easier first day for Duncan.

The following day we had planned to head to a little desert Oasis at Huacachina on the main road it was a simple 1.5hr drive on a tarmac highway but I had spotted that we could go down a small road on the coast inside the park hugging the cliffs and then drive directly across the desert to the small Oasis which was our location for the night.  This proved to be quite an adventure the coastline was very beautiful so we were stopping all the time to take in the views as the dunes came right down to the cliffs as the road wound along the clifftops 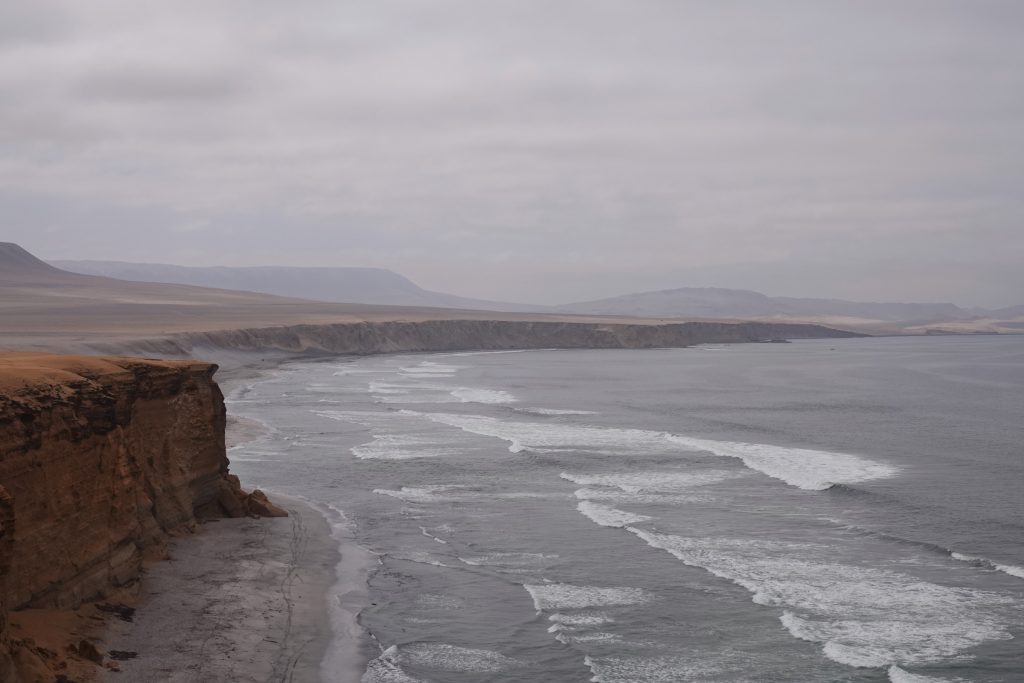 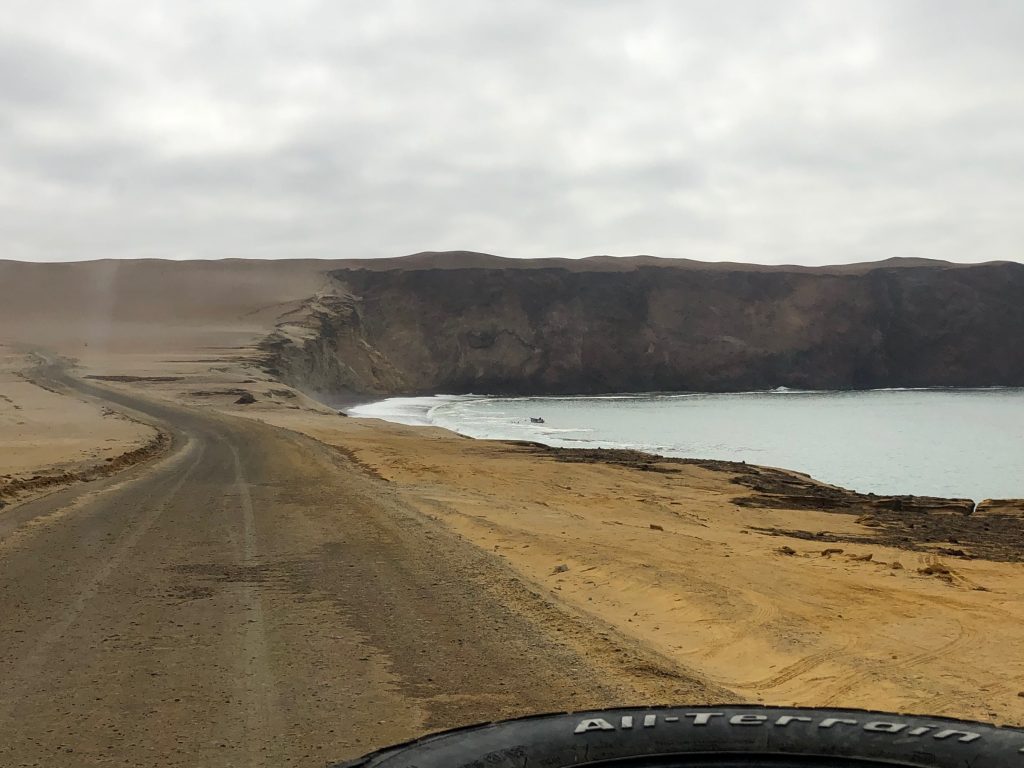 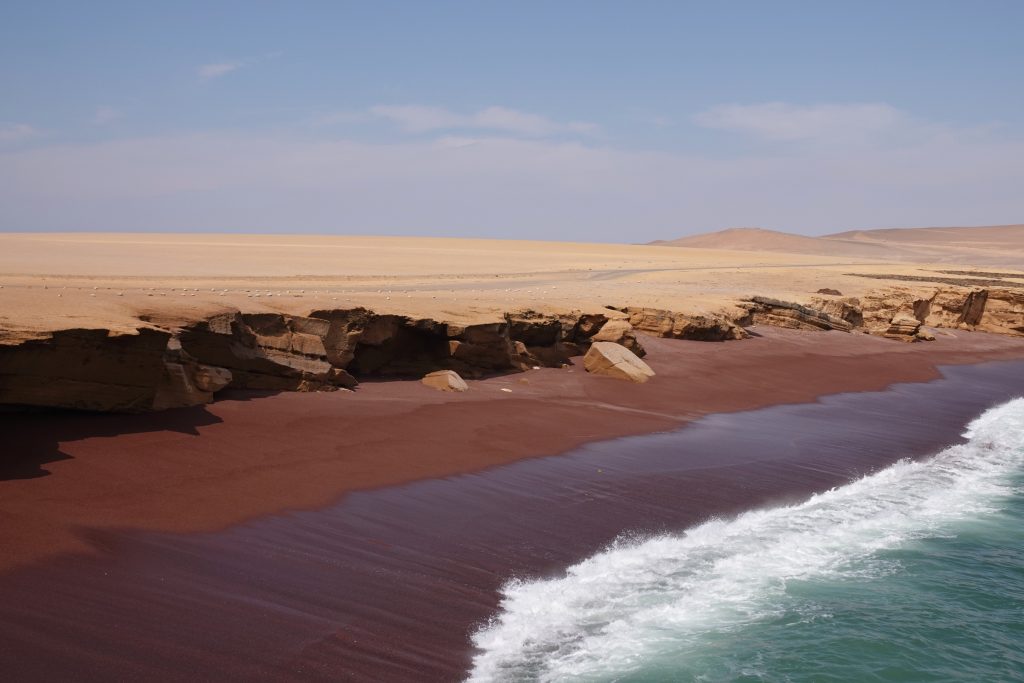 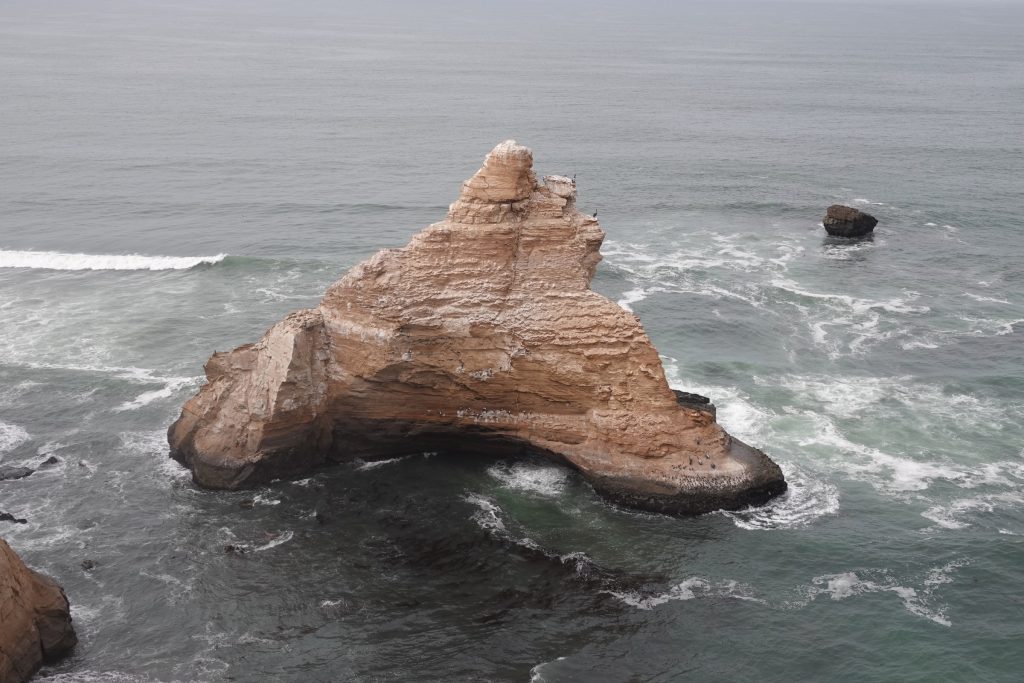 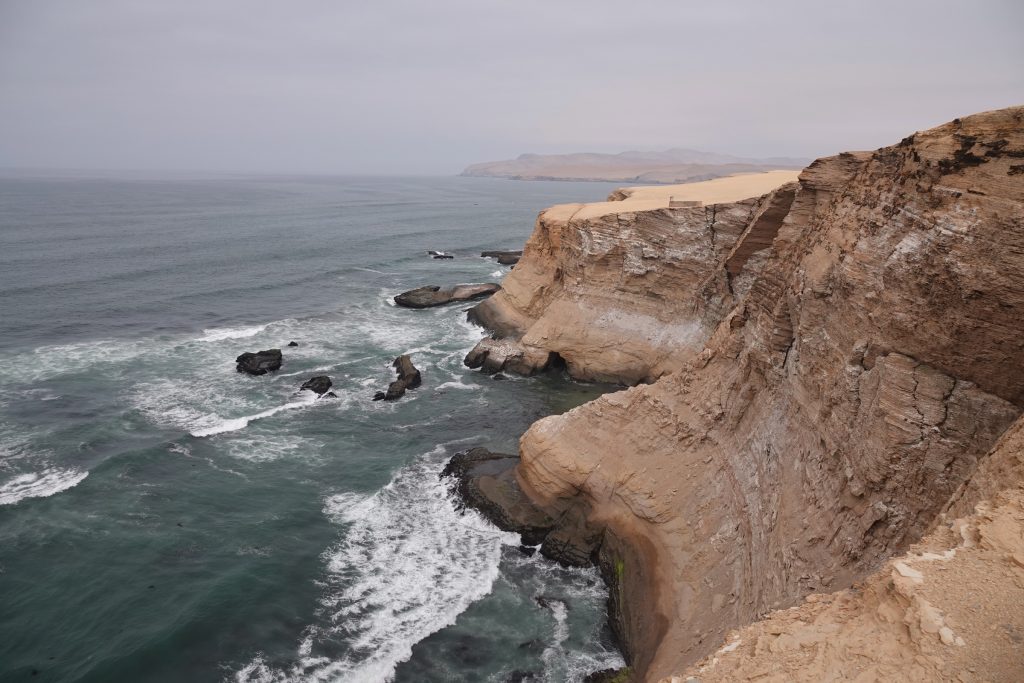 At one point the track got a bit tricky as we crested a large sand dune to find that the track sideslipped to the right at about 30 degree slope for 200m and then went very steeply down for about 400m to the valley below.  Clearly some tracks showed that some people had taken this path but our internet system had a few posts from other overlanders who indicated that it was impossible in a loaded truck.  I walked it and felt it was inside the limits of the car as long as we took it slowly so there was no bounce and took the weight off the roof to lower the centre of gravity.  An unloaded Defender can do a 40 degree side slope but we have half a tonne of extra weight in Nelson much of it high up in the car. 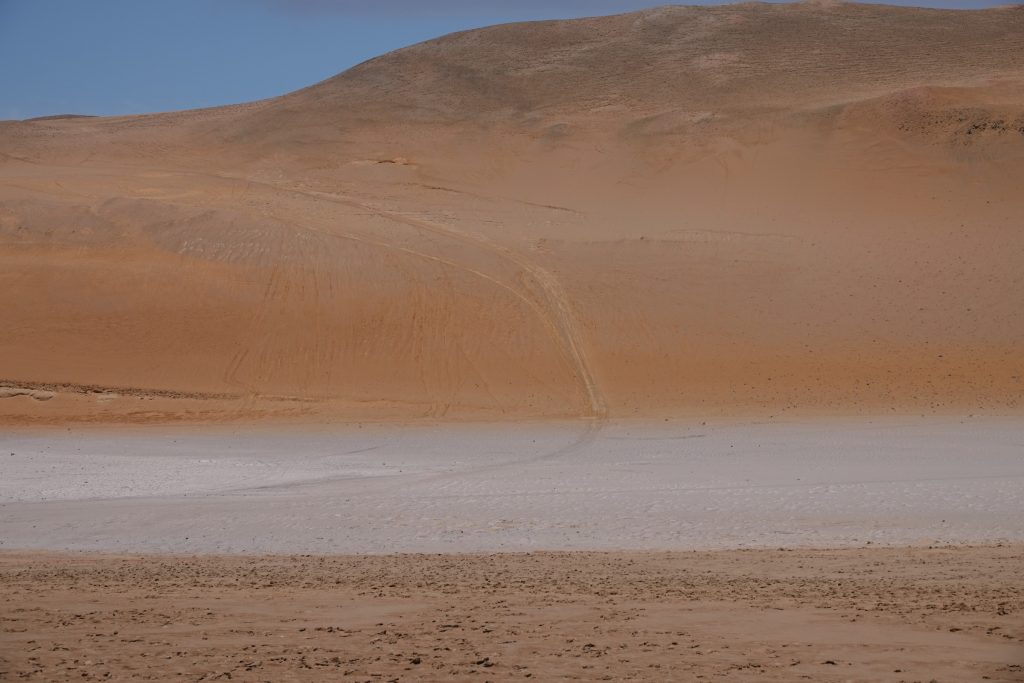 As a safety measure I got Duncan to stand on the outside step of the car, as if it was a sailboat, this put his considerable 97kg of weight in the right place to stabilise the truck and allowed him to keep an eye on the rear wheel and warn me if it seemed like it was going to lift off.  As a driver on the downside of the slope it is a pretty scary thing to look down a loose gravel slope and feel the car slipping as we moved across but with reassurance from Duncan we pressed on until we could point the nose directly down the slope and the dangerous section was over.  I must admit I was still a bit “shakey handed even 10 min afterwards but we both also had a good sense of achievement and adventure. 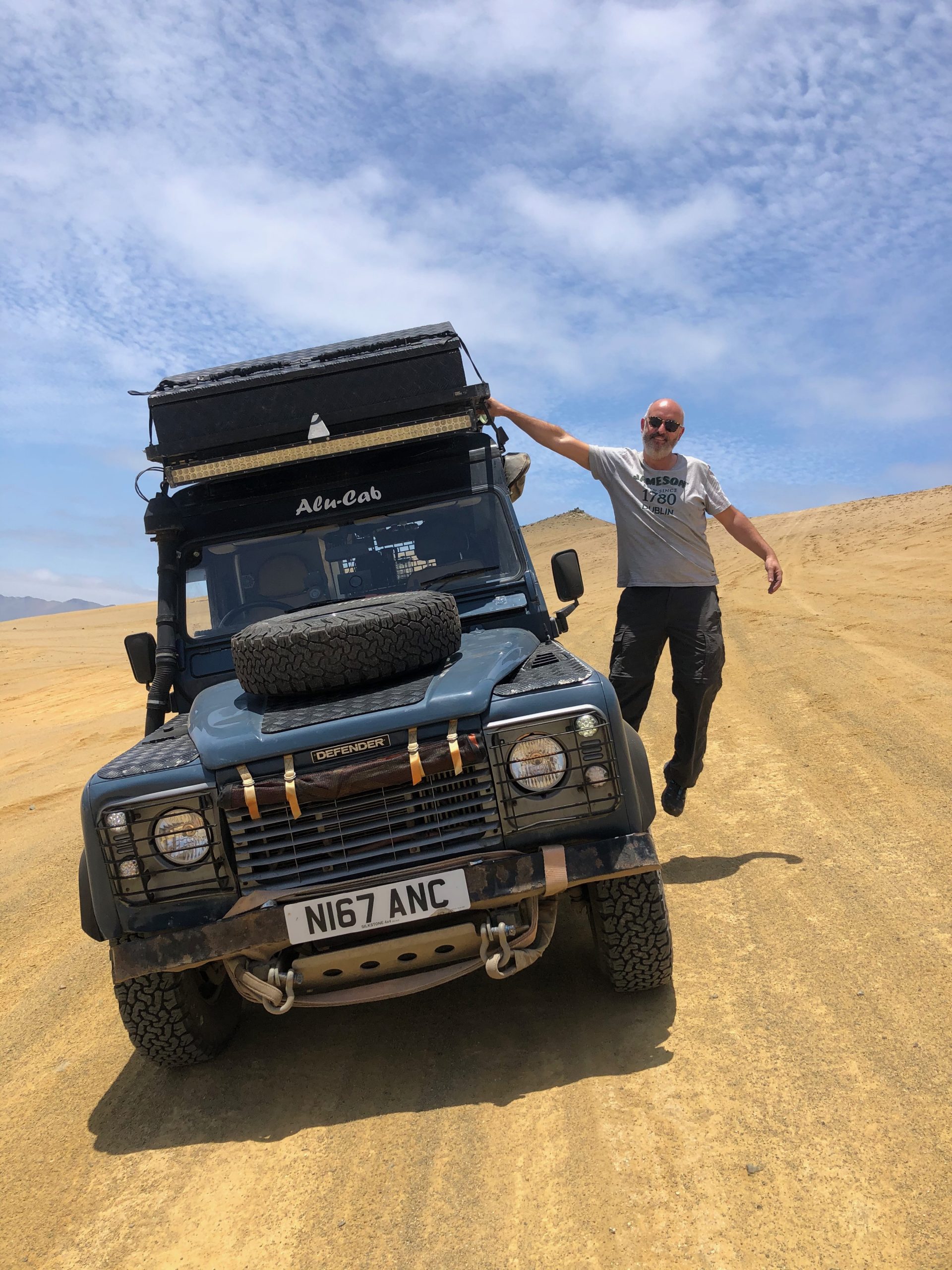 Progress across the desert section of the route, once we had left the shoreline, was slow.  In places soft sand dunes had cut across the road, in other places there were worn out and rocky sections so we were in low ratio for a good part of the three hours it took to cross the desert and we only saw one or two other 4*4 cars in the whole trip. 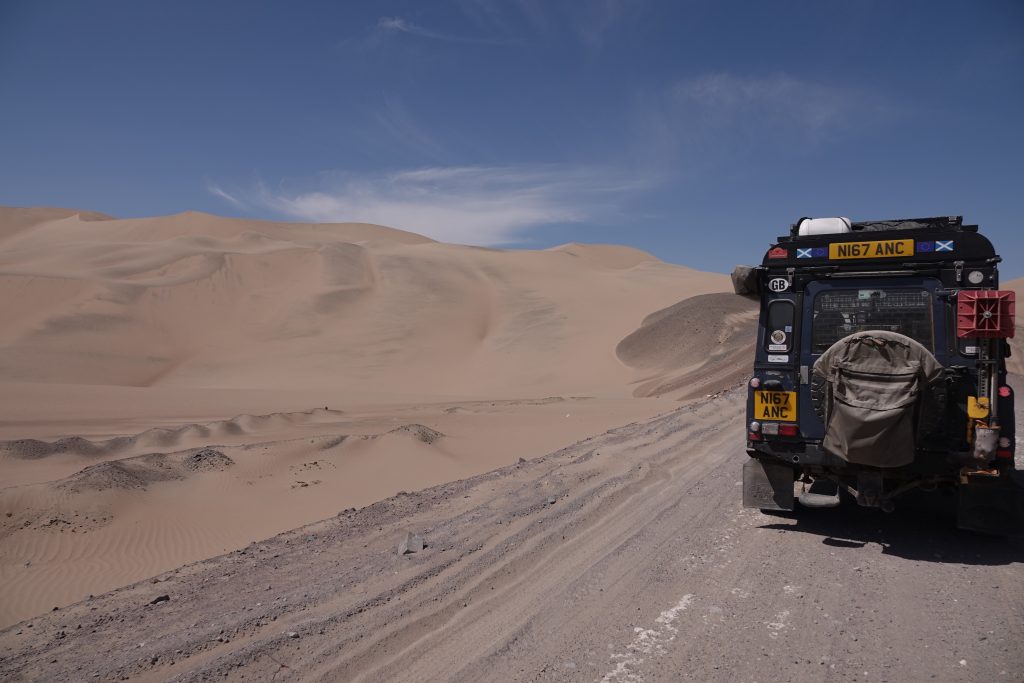 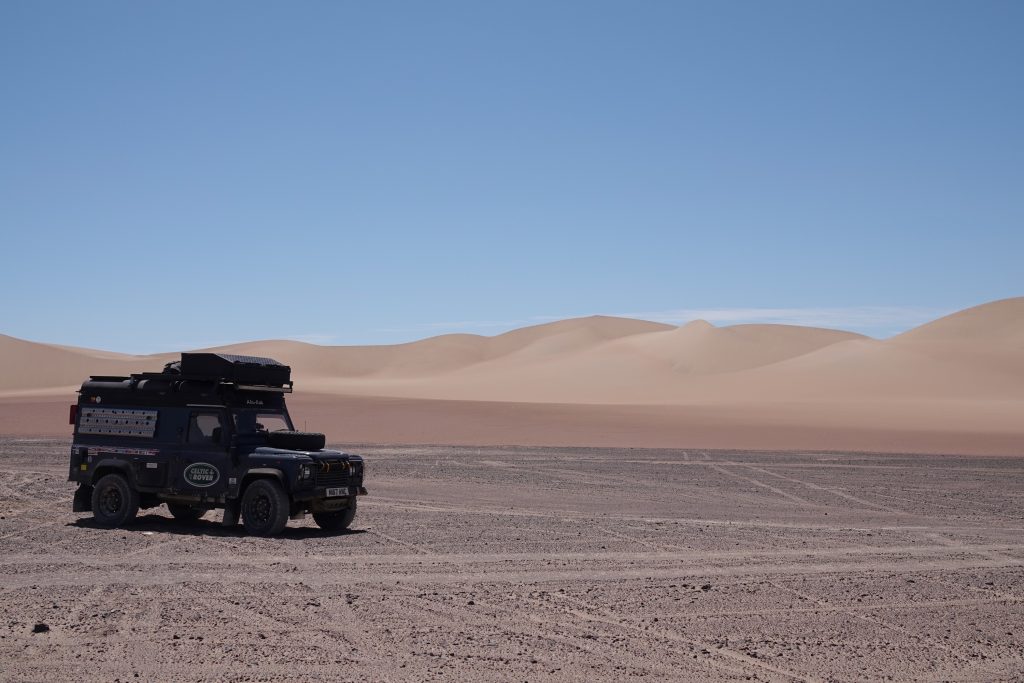 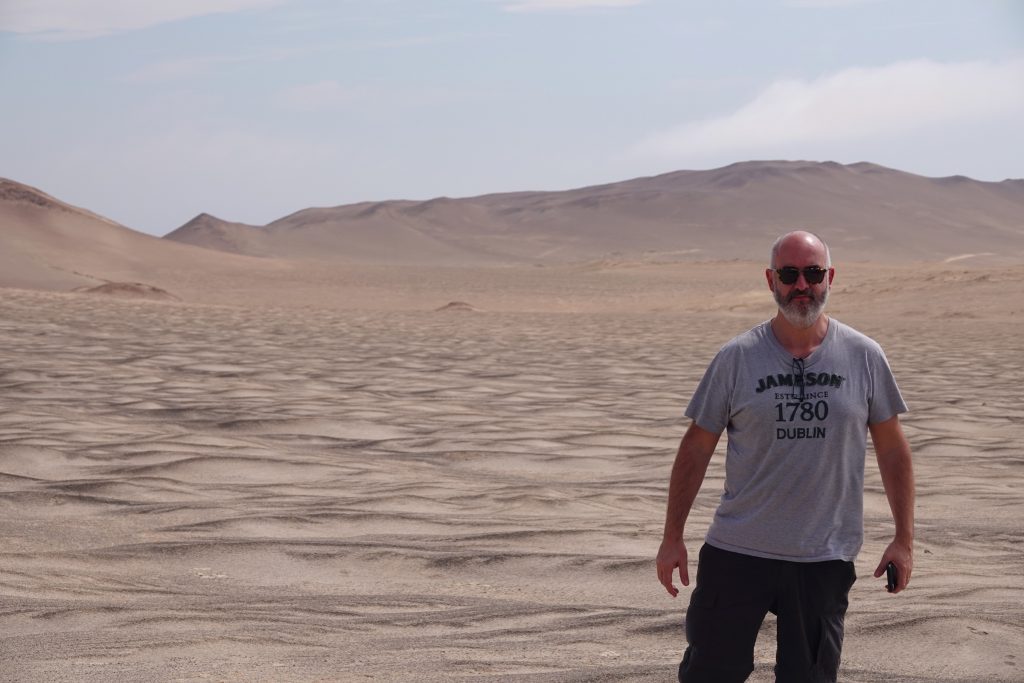 So our second day together proved to be one of quite significant off road driving with multiple technical bits that used the full capability of the land rover, my fear of having a boring or routine trip with Duncan was not realised on this day, it was some of the most technical and fun off road driving that I have done in all my trips.

The good side of being on the main tourist trail is we could end the day by a pool and with a choice of decent restaurants to eat at, a grand day out for all ! 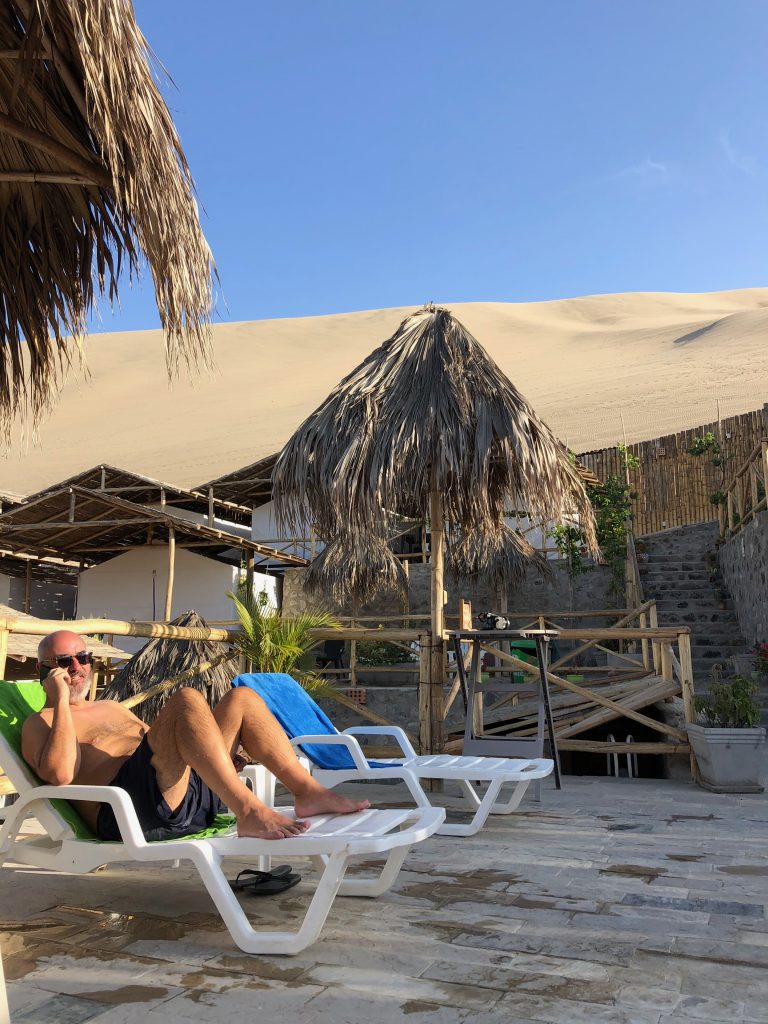