After the surf, desert (and rubbish) of the North Peru coast Errol and I headed up into the mountains, this was to be the best few days of the trip so far for me.  I was prepared better than I had been in Ecuador and had been taking my altitude medication ready for the ascent to more than 4000m in just one day.  There were four sections to the adventure in the mountains.

The “tunnel road” was not too bad for us as we are quite small, some friends of ours in a big MAN truck had found it quite intimidating, but our turn was still to come.  We decided to go up to laguna Paron and to get to it we had to go up a very steep mountain road that just clung to the sides of sheer rock faces for switchback after switchback, loose edged and narrow it was a very sketchy drive in low ratio and slowly – but awesome views, probably one of the best or the best road for views I have ever driven including both the Pamir and Karakoram highways!

The objective of this scary drive was the lake of Paron and the mountian (Artesonarju) that appears at the end of the lake, we were initially disappointed when we arrived at the lake as all the surrounding mountains were shrouded in mist, we took some pictures of the nice lake and talked to an Argenteinan couple who were also going to spend the night in the (not) luxurious car park at the end of the lake.

We huddled in the car to make a basic meal and went to an early bed as it was both freezing and raining hard at this point.  Having been advised that the best chance of a cloud free viewing was in the morning my alarm was set and I peeked out of the car at 5.30am to see the startling sight of the mountain in the first light of dawn.

We quickly dressed in warm kit and headed up to the lookout point (mirador) which allowed a full view of the surrounding peaks, it was only about 400m up but in our first day at altitude coming from sea level we were panting with every step up to the lookout, but it was worth it to see the sun light up the glaciers and the snow covered 6000m peaks of these magnificent mountains, looking at the pictures on the screen they are only a poor copy of the drama of the massive scale of these fantastic views. 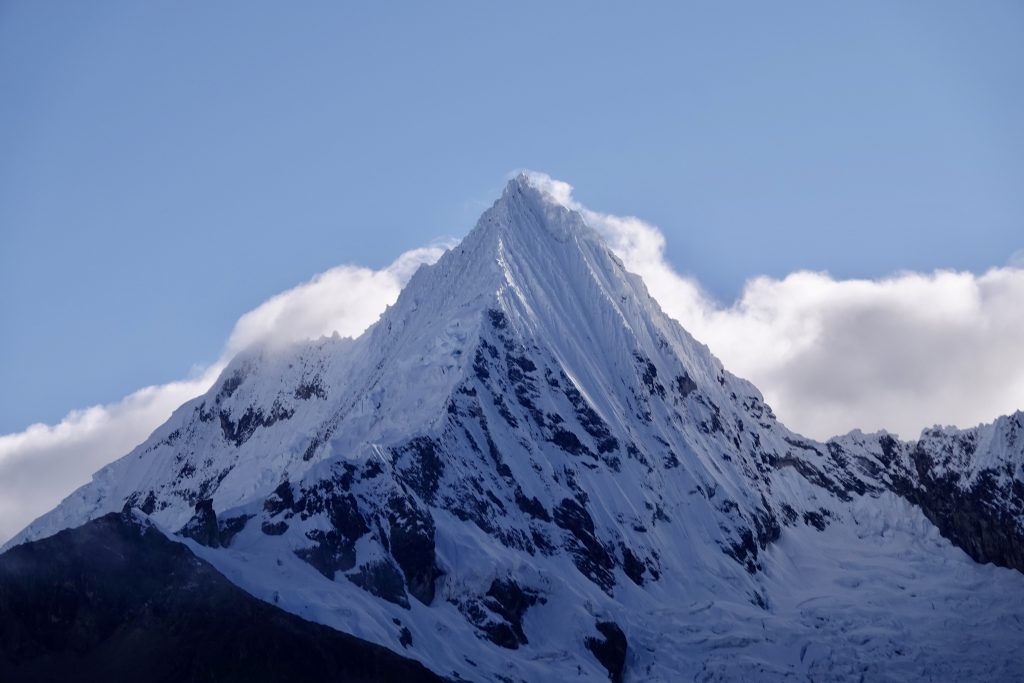 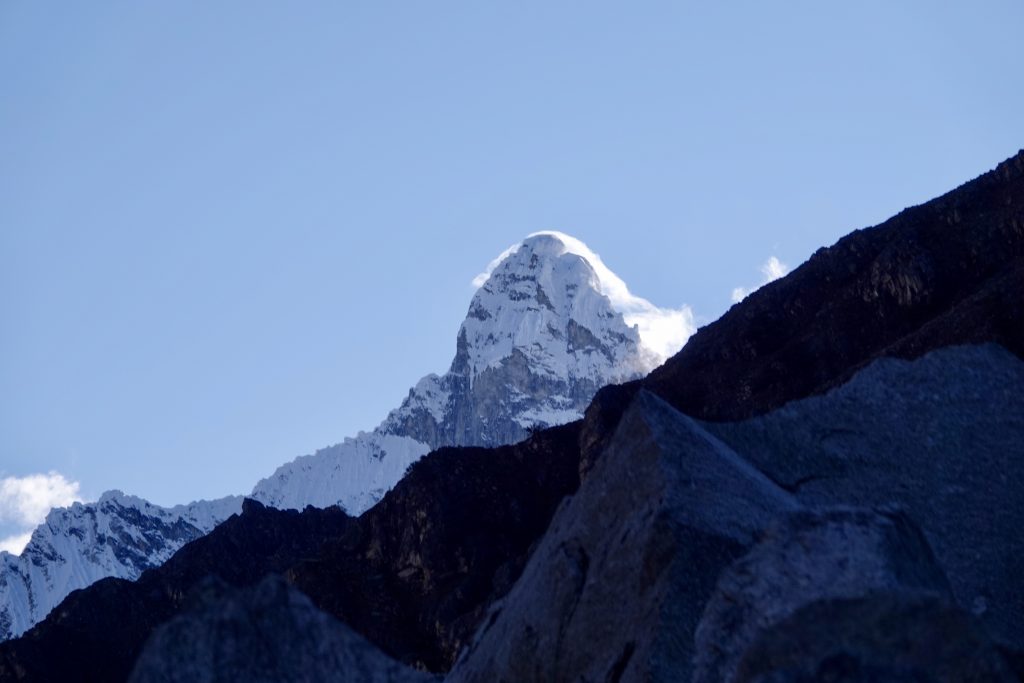 We were very happy to have got up early and seen these views, about an hour or so later, when the other couple surfaced from their camper at 8am the mountain was already covered in a veil of clouds…

Elated, and a bit puffed out, by our early start and climb we set off for the next valley to “do” Laguna 69, this plan meant we had to get to the trailhead in the next valley as quickly as possible and then hike up about 1000m and 10k from their to the glacier lake ! This was only our second day at this altitude so it was a bit ambitious and the guard at the entrance to the trail looked at us dubiously as we set off at 1pm with sunset at 6pm. 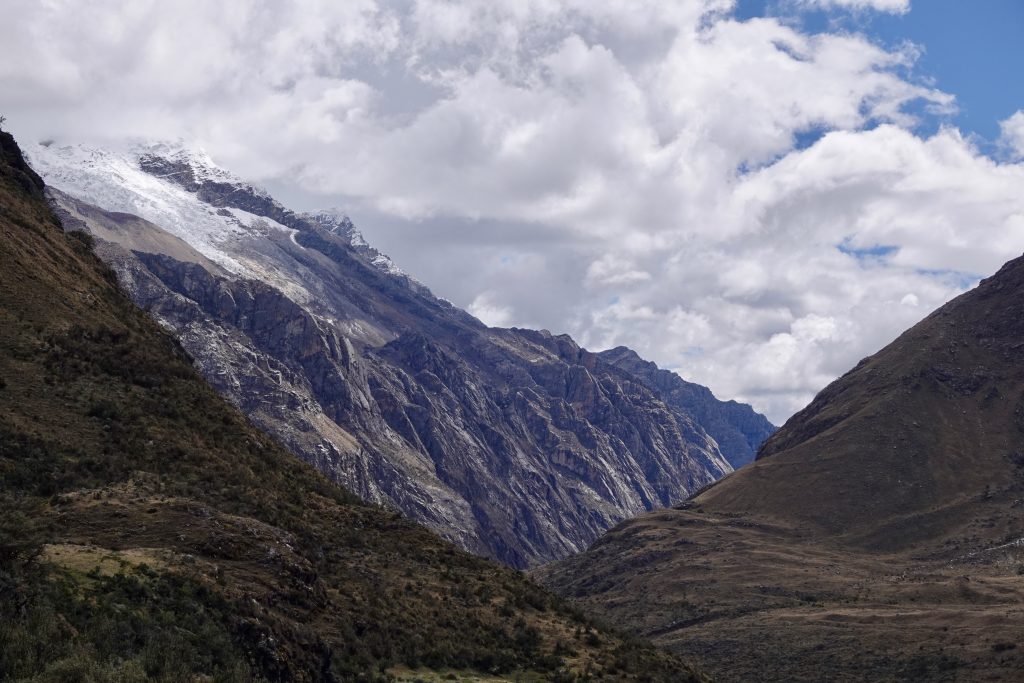 We powered up the mountain every few minutes meeting people heading down having started the hike in the early morning and made it all the way up to the famous lake just below the glaciers at 4604m.

The final stage of the adventure was still to come, most tourists head back down to the valley when they finish the hike (or one of the few hikes in the park) so they can have a good nights sleep at a lower altitude.  We stayed at the trail head and slept overnight as our plan was to take the much less travelled road higher into the mountains and further east to the other side of the Andes, so the next day we passed the good road and headed even higher than the Laguna 69 on the little rough track that lead across the mountains.  The lake you can see at the bottom of this picture is the trail head for the previous days hike.

The views as we climbed higher and higher were misty, so not great for photos, but fantastic, the road conditions were pretty rough, lots of low ratio and careful driving on quite crumbly roads with big ruts and potholes – but sometimes some lovely lakes with an almost impossibly blue colour from the high altitude light. 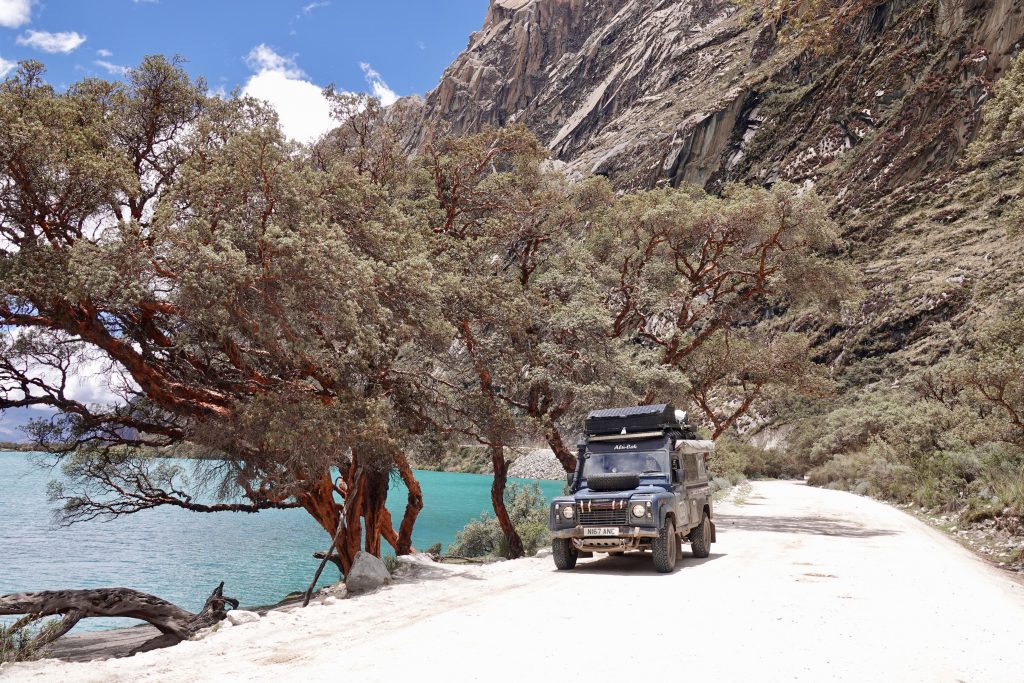 The very difficult roads continued for 150km, as we descended they turned to deep mud and wash outs so it was a really challenging drive, we had to push on as my friend Duncan had arrived early for his planned change over as passenger and was already in Lima, but eventually we ran out of daylight and could only find a rough little town to stop in and get some food, we were both exhausted by this time with the slow 15-20km/hr high concentration driving. 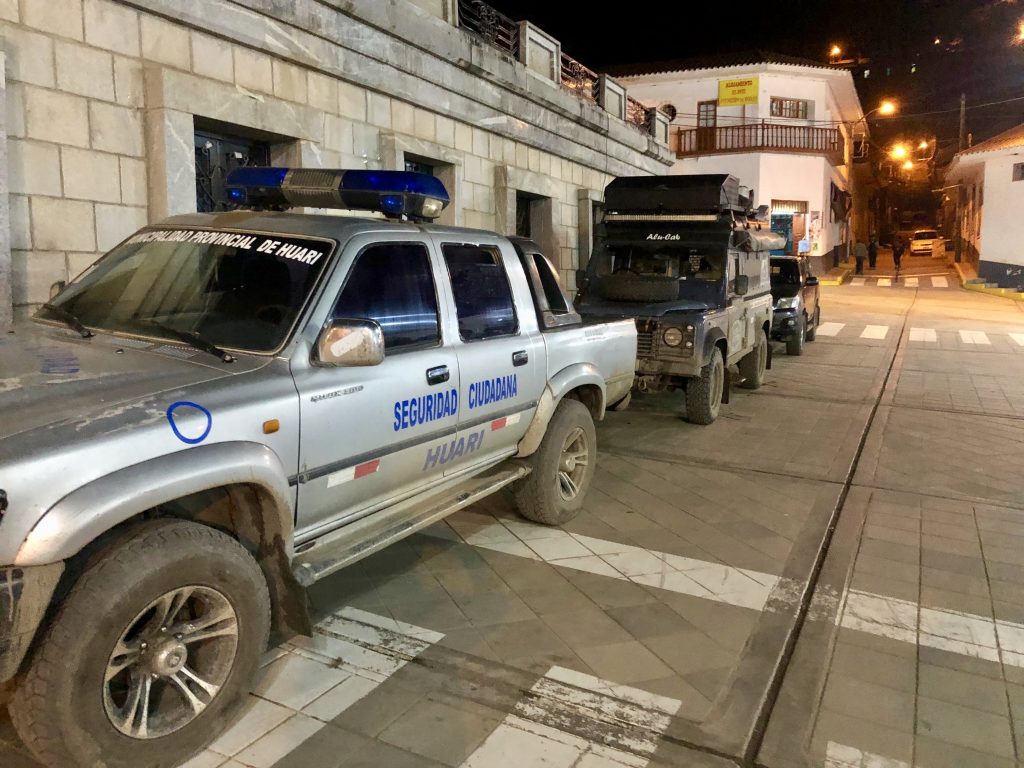 I used my poor Spanish reasonably successfully to first find the local police station and then to ask their advice on where to stay for the night with my “camping carro”, we had parked in the main square in front of the church in the hope of some holy protection.  The very nice policewoman decided we would be better to move and park directly outside the police station which we did, when we returned from dinner there was a nice young policeman with an AK47 standing guard overlooking our car on the step of the station.  I introduced myself and chatted for a bit before wishing him buenos noches, he patted his gun and told me “don’t worry about your security, i am here all night” in Spanish so I had a very peaceful sleep under their watchful eye !