Today we drove from Delhi to Haridwar where the mighty Ganges comes out of the Himalaya mountains, poor Lee had flown out from the UK in a nice BA plane, into the nice new airport and spent a day in the calm peace of the Lutyens bungalow…then we drove out into Delhi rush hour…

To her credit there were only occasional gasps and squeaks as she gripped firmly onto the grab handle and I engaged in the auto judo which is driving in Delhi, once you get used to the fact that there are no rules except don’t drive into anyone who is in front of you, even if they are coming the wrong way up a dual carriageway, or if they have gone from the inside left lane across the front of you to turn left at a no left turn junction, then all is well, in addition the side proximity alerts do not even get interesting if there is more than 2 inches to spare then that is a space…

We made it safely to the city of Haridwar and set about joining in to the sunset ceremony which is supposed to bring good luck for the family if you float a little flower boat down the river at the end of the ritual, here I am with ours ready to experience Hindu India in full technicolour reality. 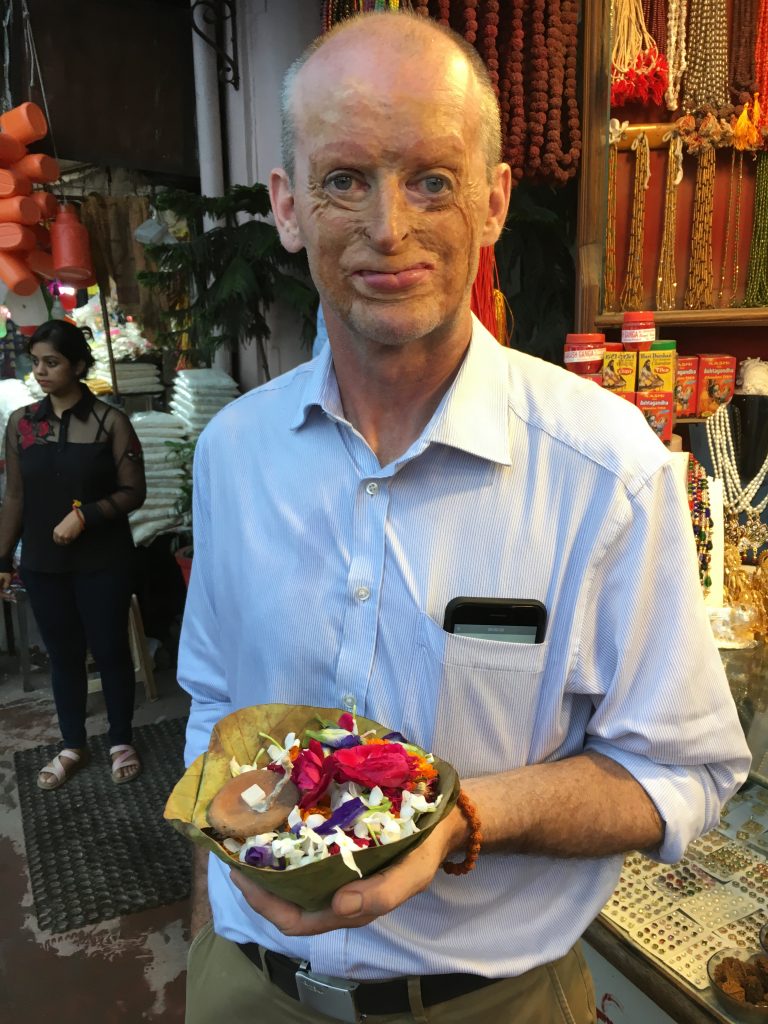 You can see that a few months of overlanding, which of course includes a few bouts of tummy trouble, have leaned me out a bit.

First thing was we had to hand in our shoes after walking through the muddy streets, I said to Lee that I thought they may have had a flood in the last few days as the streets were so muddy!  No shoes are allowed on the “ghats”or steps that lead down to the Ganges where the worshippers had gathered for the proceedings 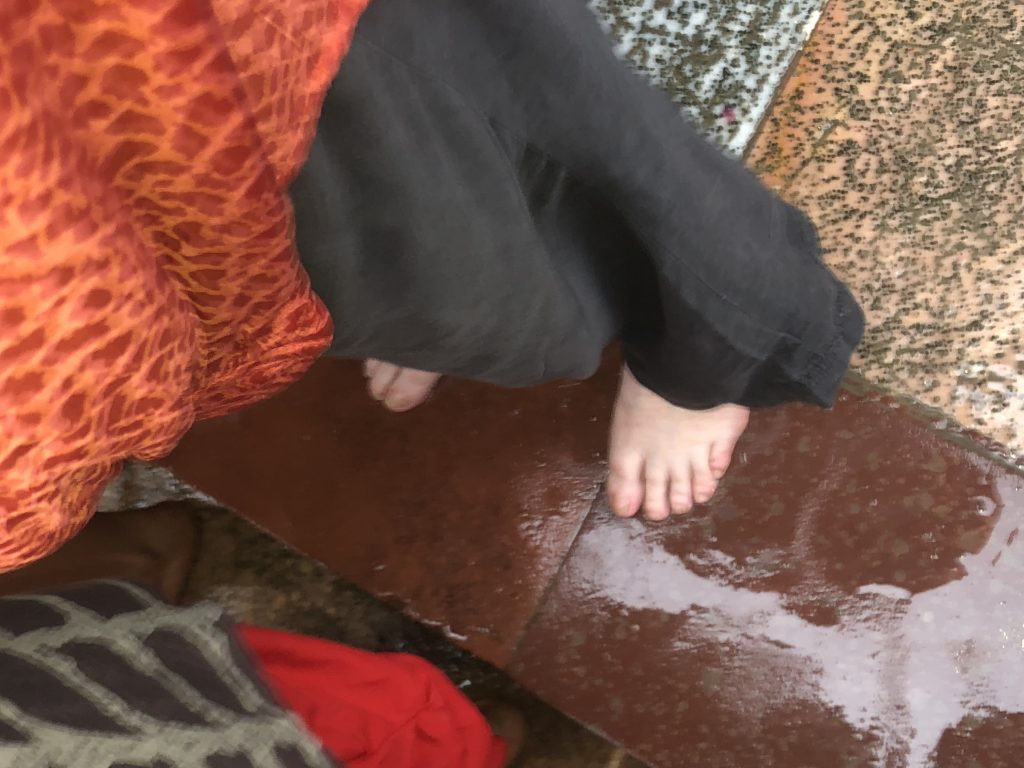 At first things were quite calm, some folks were bathing in the river, including ladies in their full sari’s, and there was a chant coming across the loudspeakers, once I learn how to embed video I will put it in here. 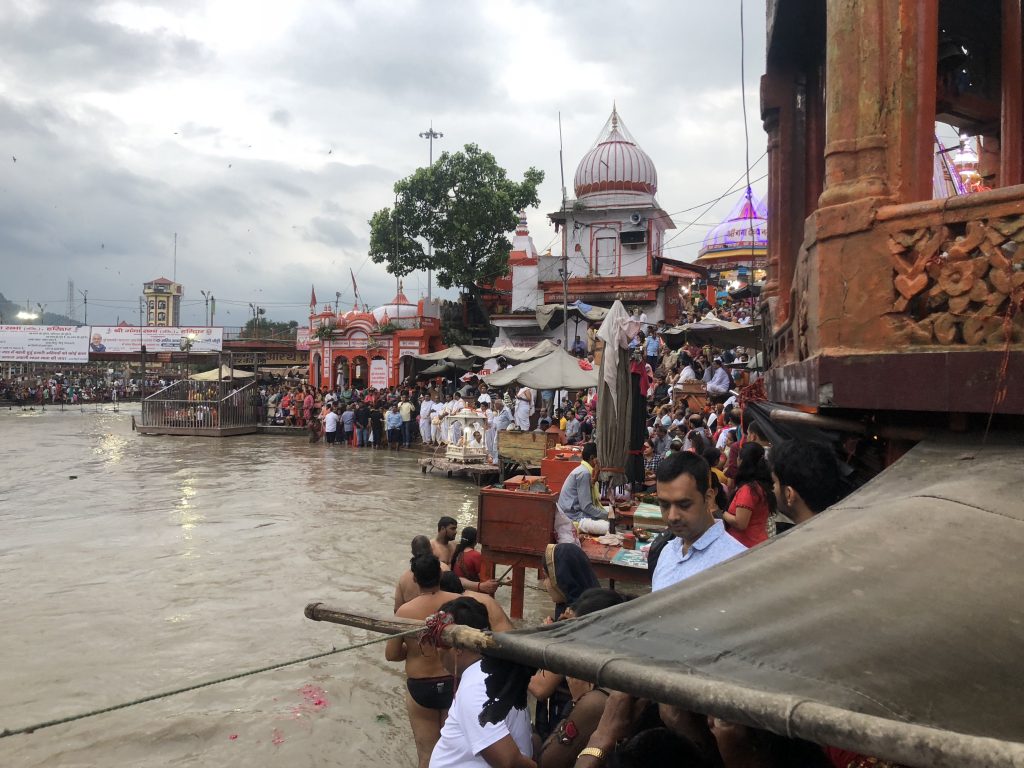 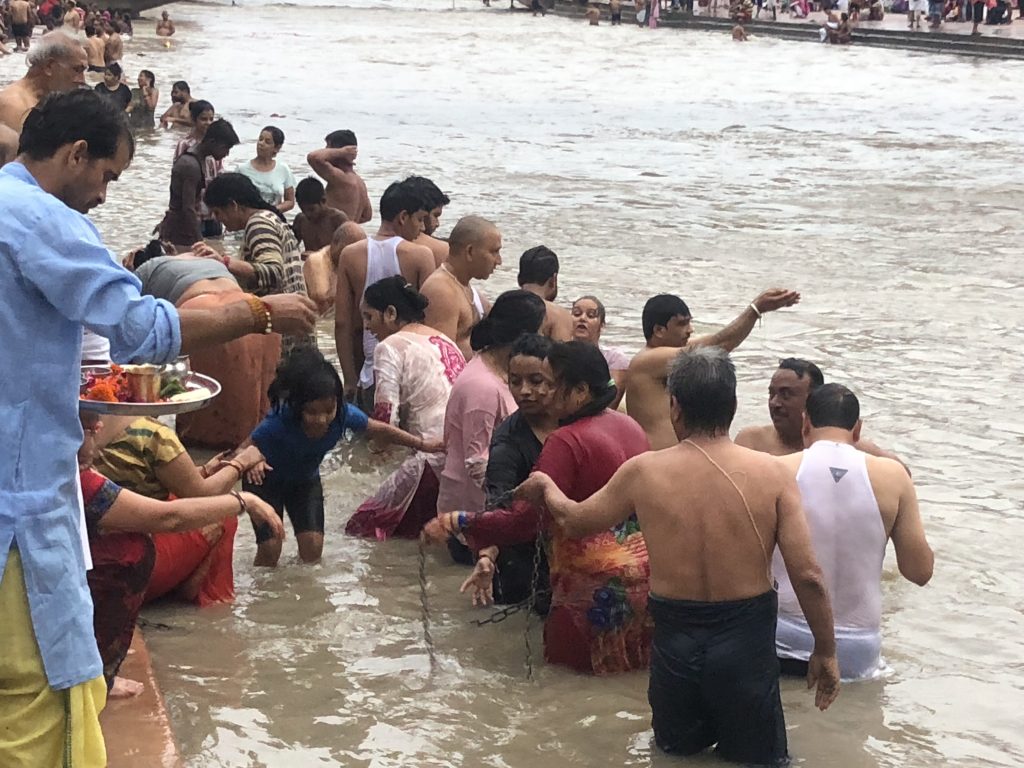 Gradually as dusk falls more and more people get into the river and the chanting from the crowd begins to drown out the loudspeakers, other than recognising the Hari Rama chorus it was all a mystery to me but the mood was infectiously happy and fun filled.  At various times arms were waved in the air and special towers of candles were lit from the main fire which in turn would light our little boats. 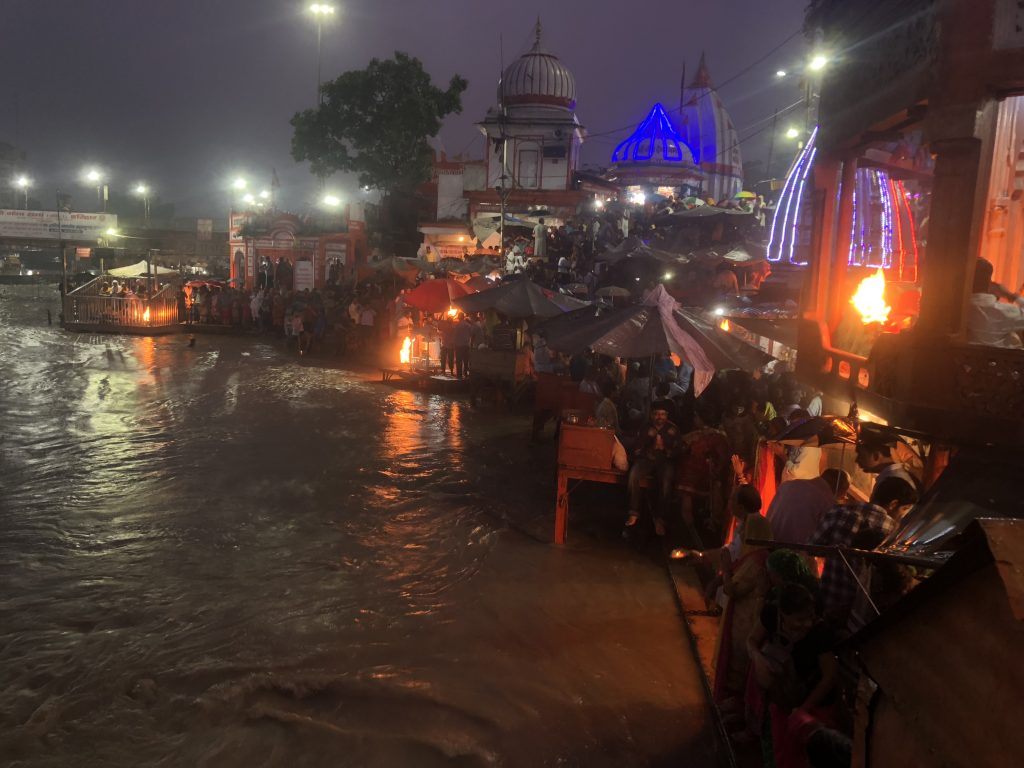 About 10min into the proceedings the heavens opened and a monsoon rain just about equal to standing under a powerful warm shower opened up above us, coatless we tried to seek shelter but eventually we just got completely sopping wet soaked through to our underwear.  It was as if God had decided we were not joining in enough with the bathers so was going to ensure we joined in properly.

We did indeed launch our little boat with the assistance of a hindu priest (£20) we got to chant the appropriate words over the boat to ensure that all our troubles would be resolved !

By the time we were finished we were soaked through, and then we had to walk back down the streets which were now fast flowing rivers about 2 to 6 inches deep with muddy water – so we knew why the streets were so muddy earlier.

In the peace and tranquility of our marble floored fancy hotel we stripped off the wet stuff jumped in the shower to wash off the mud and sat down to a lovely dinner of various curries, rice roti and of course chai so full on India from driving to ritual to food all in day one.